When she was 6-years-old and playing boys’ hockey in Western Massachusetts, Katie Guay didn’t think she’d wind up breaking barriers. But here she is, in the midst of one of the most pinch-me weeks of a pinch-me year, coming off another milestone.

“It was definitely everything I thought it would be,” Guay says. “Obviously, any opportunity to work at the Garden is a special one. I just tried to focus on the job at hand. And once the puck went down, it was just another hockey game. Walking in the door, I knew it was going to be a fun night.”

Flipping the calendar back a year, Guay kicked off 2018 with the honor of officiating at the Olympics. This would qualify as a very good year. And, yet, this referee life is as surprising as it is impressive. 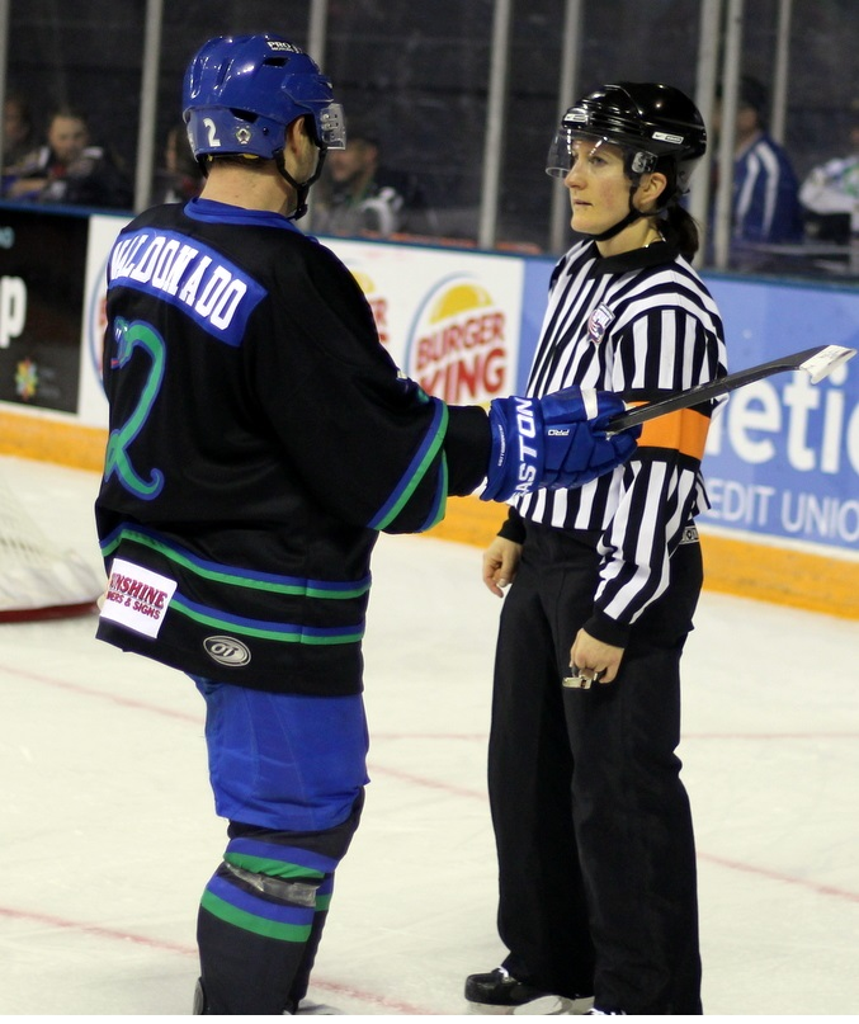 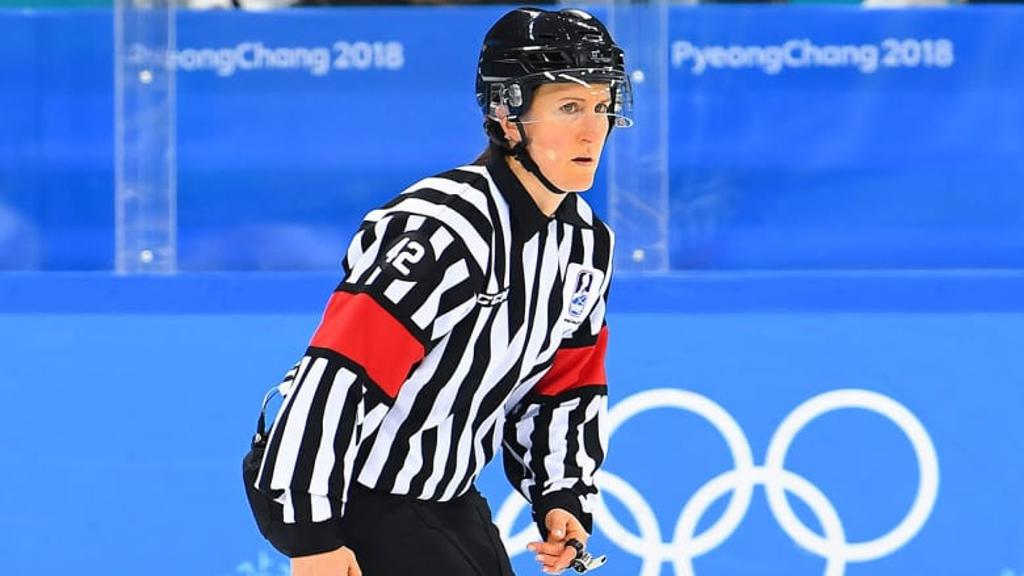 Where it All Began

From her youth days in Westfield, Mass., and a year at Westfield High School, Guay moved on to play prep hockey at Deerfield Academy before four years at Brown University.

Admittedly, throughout that time, Guay’s most significant exposure to the world of officiating came by way of accumulating PIMs.

“I certainly had my fair share of penalties,” she says with a chuckle. “I was never a talker, so I didn’t have any run-ins, but I had a lot of trips to the penalty box.”

So how does a very good hockey player, one talented enough to play at prep school, then at a Division I college and for the U.S. Women’s Under-22 Team?

Well, Guay’s not so sure. But she wouldn’t change a thing.

“Following [Brown], I missed being part of the game, and officiating was a great way to get back into it,” says Guay, who was also playing in a women’s league on the South Shore at the time. “I had student loans and I thought, ‘If I reffed a couple of games, I might make my money back.’ That was my initial motivation, I think, when I was driving more than an hour for a 36-minute game.”

Soon, she was working games with Julie Piacentini, a trail-blazer in her own right who had officiated in two previous Olympic Winter Games and the first female to have officiated an NCAA women’s final.

“I paired up with her early on and listened to her experiences,” says Guay. “And I really set my sights on working an international game.”

Guay’s chance came this past February in South Korea.

“The Olympics were a long, seven-year journey,” she says. “It was an incredible feeling to get that call.”

More ground broken. Another milestone for the books.

Guay credits Paul Stewart, the veteran NHL referee who took over the role of ECAC Director of Officiating in 2007, for supporting her progress and success. By 2015, Guay had made her but of history by officiating a Quinnipiac exhibition game, then a regular season game at Union.

“A few years prior to that, [Stewart] said, ‘I think we can work you into men’s hockey,’” says Guay. “At the time, it wasn’t a goal of mine. I was really just kind of looking toward the Olympic path and hoping I could do whatever I could to get there.”

At that point, Guay hadn’t been on the ice since ninth grade.

“I thought about it, and I think the reason I was a little hesitant is because I was out of my comfort zone,” she says. “But I was able to do a bunch of high school hockey and get back into the flow. After a few years, I was ready to make that jump. Now I’ve had three years under my belt and I’m becoming more of a familiar face, which obviously provides me with some more credibility on the benches. And that certainly helps the confidence level.”

It’s no secret that officials and players, along with their parents and coaches, are often at odds. Guay has an idea about how to thaw those relations on the ice.

“I think every player and coach should try officiating,” she says. “I hadn’t started until I was out of college, but, had I started earlier, I would have become a better player. Knowing the rules is helpful. And every coach and player should have the chance to get on the ice and referee so they can see the sightlines.”

Just as players might want to consider playing different positions in an effort to develop positional empathy, they could also try traveling a few miles in the most thankless skates on the ice.

“If every coach and player would be willing to do that,” says Guay, “it’s not that there wouldn’t still be yelling, but I think there would be more respect and understanding for what an official is looking at during the game.”

A February ago, Guay completed her Olympic dream. This February, it’s the Beapot. But it’s not her only high-profile skate of the month. There’s also Crashed Ice at Fenway Park.

After trying out, Guay earned a spot to compete in the first Crashed Ice event to be held in a stadium in the United States.

“When I saw it in Montreal, I thought how cool it would be to skate down,” Guay says. “So that stuck in the back of my mind, and then I heard it was coming to Fenway and I thought, ‘I have to do this.’”

The final test before Fenway came on a 600-foot course at Loon Mountain.

“And I remember standing at the starting gate wondering … why?,” says Guay. “It was the same feeling of standing at the top of a ski mountain and you realize that the black diamond was a little bit steeper than your ability. But you’re standing there, so you just have to point your skis and go.”

Clearly, the tryout went just fine, and now only the main event looms.

“It was definitely a thrill, and I think it was the fastest I had ever gone on skates,” Guay says. “My skates started shaking toward the end. I think my line at Fenway is just to keep on my feet, but it would be kind of cool to slide into home plate where the finish line is. “

In addition to officiating at some of the highest levels and skating down icy inclines, around hairpin turns and over bumps, since April, Guay has been working for the USA Hockey Foundation.

Guay is also looking to give back to the world of officiating: “I’d really like to just continue to mentor young officials. There are a lot of young officials who have a ton of potential, and I’m hoping that with these opportunities I’ve been given, that they continue to pave the way.”

Is the NHL on the radar?

“The question that continues to come out is whether the NHL will have a female official,” she says. “And I certainly think that the experiences I’ve been given are going to continue to open doors for other officials.”

Guay would like to see more officials coming from the playing ranks, too.

“I hope that more former players will consider officiating,” she says. “At the end of the day, every competitive playing career comes to an end. With the option to stay on the ice, I find that officiating brings the same adrenaline flow to the player. I spent eight years as an assistant at Noble & Greenough, and being able to work with the players and help them out is great, but being on the ice for a game is different. So I just hope that former players and younger kids will see that officiating as a part of the game.”

If the exposure Guay has gained during her ascent in the officiating world creates opportunity for those who come after her, all the better.

“I hope the publicity that these games have brought do open some eyes to younger players and the assigners,” she says. “My goal was not to work in hockey. It’s become an opportunity but I never thought it was a possibility. Now that we’re seeing it is a possibility, and Paul Stewart was willing to give me a chance, I’m hoping it will open the eyes. At the junior level and the youth level, get girls out there in boys’ games. If they can skate and they are ready to get out there, give them a chance.”

As in the sport, failure is part of the process for officials, too. And it would help for both officials and players to know that.

“The biggest thing I tell younger officials is that you’re going to make mistakes,” Guay says. “And I think that’s tough because coaches aren’t always so accepting of mistakes that we make on the ice. I probably made a mistake from every page in the rulebook over time. But the goal is to learn from those mistakes and try not to make the same mistake twice. Don’t be afraid of mistakes. You’re going to make them. It’s just a matter of learning and moving forward from them.”

“There were a lot of female officials before me who had the skill but didn’t have the chance. So I kind of feel like I’m doing it for all of them who didn’t have the opportunity and hoping to pave some more paths for the younger ones coming up through the ranks.”