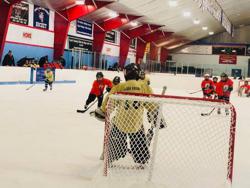 Where it all begins

Barely a year old, the Bay State Hockey League has already accomplished something fairly remarkable. Since its formation as a collaboration effort between Larouco, Kane, Romer and Cashman last January, the league has managed to establish a name for itself in the South Shore and, in many ways, across Mass Hockey with its core initiatives.

"John Cashman and I were talking one day, thinking about what we could do with all we’ve learned from running club programs and town programs, and what improvements we could make to give the kids a better feel for the game — to get back to having fun, less pressure, that type of thing,” Larouco says. “We started off with the intent of modeling out what age groups we wanted to work with, and we found that 8U and 6U were what we wanted to start with. We wanted to try to fill a need by having kids playing on the small surface and honing in on the ADM model.”

Larouco grew up in Rockland and went on to star at Brown University during a playing career that included trying out for the 1998 Olympic Team. She recently moved on from a long corporate career to focus on the sport that means so much to her.

“I love this game. I grew up playing this game,” she says. “Our model is for the love of the game. We like to make sure we give the kids a good experience on the ice and the parents a good experience off the ice. So we said, ‘Let’s work on the small space thing. Let’s be the ADM league in our area.’”

BSHL has not only embraced hard dividers and 4x3 nets for their young programs, but also made them a foundation of their early success.

“That’s our niche,” Kane says. “Utilizing the blueprint, that ADM model, hard divider boards, making sure that we’re providing a space for the kids to really reach their full potential.”

“I think what we’re doing right is providing a personal touch to the product,” Larouco adds. “And making it easy for programs, parents and players to just show up and play hockey. We’re present and we’re able to adjust.”

In fact, Kane, as a messy storm passed through over the long holiday weekend and forced some cancellations, made use of the extra ice at the rink in Rockland – which happens to be a short walk from his house – for an impromptu skate for players he thought could make it.

“There are times we hear someone say, ‘If there are any other options …,’” Larouco says. “And we said, ‘Let’s stop talking about having other options, and let’s actually do it.’”

“From my perspective, it’s a no-brainer,” Kane says. “You can look past the money because of the experience being provided. There was a lot of interest throughout our Candy Cane Classic tournament with programs asking where to sign up. And we want to provide that place for them. USA Hockey has done all the math. The science is there.”

Kane, a former goaltender, sees advantages in both the hard dividers playing a role in elevating the experience for young players and in the 4x3 nets for skill development.

“It helps develop confidence for goalies,” he says. “But it also pushes the shooters to utilize more skill and not just throw the puck up high.”

Heading into the 2019-20 season, the BSHL looks to expand without going overboard.

“As of now, we only have a 6U full season,” says Kane. “Next year, we will do 8U as well. The objective isn’t to make anyone’s pockets fatter. It’s to push the theory and push this model forward.”

The league is also working on a significant partnership.

“We’re partnering with Alex Biega,” Larouco says, referring to the Canucks defenseman who played his college hockey at Harvard and is married to a Massachusetts native. “He’s in the area and he said he wasn’t quite sure what we were on to but that he wanted to be a part of it.”

“We’re hoping for a long-term partnership,” says Larouco. “He has three young boys, and he says of playing in the NHL, ‘I can’t do this forever. I want to be on the ice with the kids. I want to see the smiles on their faces.’”

Larouco is also trying not to take on more than the league can handle as well as it has handled so much this past year.

“I try to hone in on doing the little things right and make sure we don’t rush into getting too big,” she says. “I’ve said no to a lot of things because I want to do it right. We want to make sure that we have all aspects running well. We’re perfectionists a little bit.”

“We’re just getting started, but the feedback has been great,” says Larouco. “My hope is that the league just continues to gain momentum. I want people to look at us and say, ‘These guys have [it all] together, from off-ice to on-ice; it’s modern and professionally run; and they provide excellent skills for the kids.’ I want to make a name for ourselves by having good people, good kids, and good players, and I want parents to say, ‘My kid learned something and they had a good time and they came back smiling.’ I hope people can look back and say their kids really had a good time whenever they stepped on the ice.”