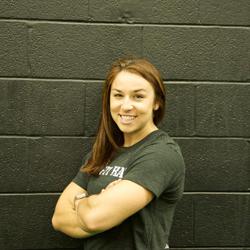 Since the dawn of hockey, being faster than your opponent has been a critical part of the game. As skill has become more of a focus than ever within youth hockey and right up through the National Hockey League, speed’s role in hockey has only grown in significance.

In her days as a hockey coach (she carries Level 4 certification) and now as a full-time strength and conditioning coach, Kelli Vossler has enjoyed a front row seat for this evolution.

“The game has changed so much,” says Vossler, who picked up the sport at the age of 12 in her hometown near Lake Placid, N.Y., then played college hockey in Upstate New York before taking on coaching and player development roles. “Within the last decade, where the game has gone is lights-out one of the fastest changing things in sports.”

Speed, though, isn’t just about getting out of the starting blocks and ripping off a 200-foot dash in a straight line. It’s important to note that while “speed kills,” it can do so to fast players who aren’t reading the game. A fast player going in the wrong direction is only getting out of position more quickly.

Being able to incorporate the change of speed into the game and into workouts is doubly beneficial.

“If you have that change of speed, that acceleration, and the ability to decelerate with stops and starts, you will have a leg up on other players,” says Vossler. “Skating in a straight line is one thing. But being able to stop and start, and to be explosive, that’s the second part.”

Every change of direction on the ice is another opportunity to fall behind the play – or, if you have worked on your speed, to leave the competition behind.

“When you have a puck and you’re trying to beat a defender, you can pull it back, make an escape move, then accelerate again,” says Vossler. “It’s all these little things. The acceleration, de-celeration and acceleration again is really important.”

Vossler, who has also worked with hockey strength and conditioning legend Mike Boyle, is a proponent of working on single-leg strength as a means to improving explosiveness. And that typically means, particularly for players as they get older, working away from the rink, too.

Players at younger ages, Vossler believes, should be focusing on having fun, playing multiple sports and working on things like sprints and cone drills before moving up to box jumps and medicine ball exercises away from the rink.

“Playing as many sports as possible, that just adds to overall athleticism,” says Vossler. “And doesn’t lead to burnout. But I think it’s always beneficial to work on some sort of conditioning aspect as early as 11-years-old. And I don’t mean seeking out or working out with a trainer three times a week. Just general strength and conditioning.”

But as those players mature, strength and conditioning in even more specific forms away from the rink will take on more importance.

Vossler suggests ladder drills as another means to layering the elements of speed.

Developing athleticism, strength and speed doesn’t ever have to be expensive, either—playground learning is free.

On the upside, getting faster is an equal opportunity game.

“Everybody can get faster,” says Vossler. “Something is always better than nothing. If you were doing something to supplement your on-ice practice, it’s better than nothing. You just have to work on strength, balance and coordination. Play other sports. If you can learn to get basic mechanics of running and jumping, it’s going to help.”

Speed can create extra seconds – eons of time in today’s game – to move with the puck. Speed can draw penalties. Speed can open up all sorts of room for your teammates and create passing lanes that develop earlier and stay open longer.

But even if you’re not Kendall Coyne or Dylan Larkin, you can make speed a vital element of your game. Speed between your ears can and should be honed, too.

“I’m a huge proponent of telling people that it is not a one-size-fits-all thing,” says Vossler. “Kendall Coyne has been anomaly since I’ve played against her and coached against her. It’s important to understand the speed of your skates is one thing, but the speed of your decision-making is also a strength. Making fast decisions and getting your head up faster while you’re moving your feet is something that I’d rather focus on.”

Still, there is a form and a function that should be tended to as a cornerstone of getting faster.

“It’s learning the fundamental mechanics from an athletic standpoint, meaning a really good squat, a really good hip hinge and the balance and coordination and strength to do things on one leg,” Vossler says. “It’s really easy to hide weaknesses when you work from a bilateral standpoint, but, in hockey, we’re working on one leg at a time. So, to have that strength from a single-leg standpoint, as well as the strength and balance through the midline, that’s crucial for helping and maintaining speed as players get older.”

“I will work with kids forever,” she says. “What I love most is being able to add value to their lives, just a small impact on their lives to allow them to take something to the next level. And seeing their eyes light up, challenging them to try to make them do something they didn’t think they could and to watch them do it. Just to be someone who believes in them. That belief can be the fuel.”

Sometimes, it might even be a high-octane fuel for speed.