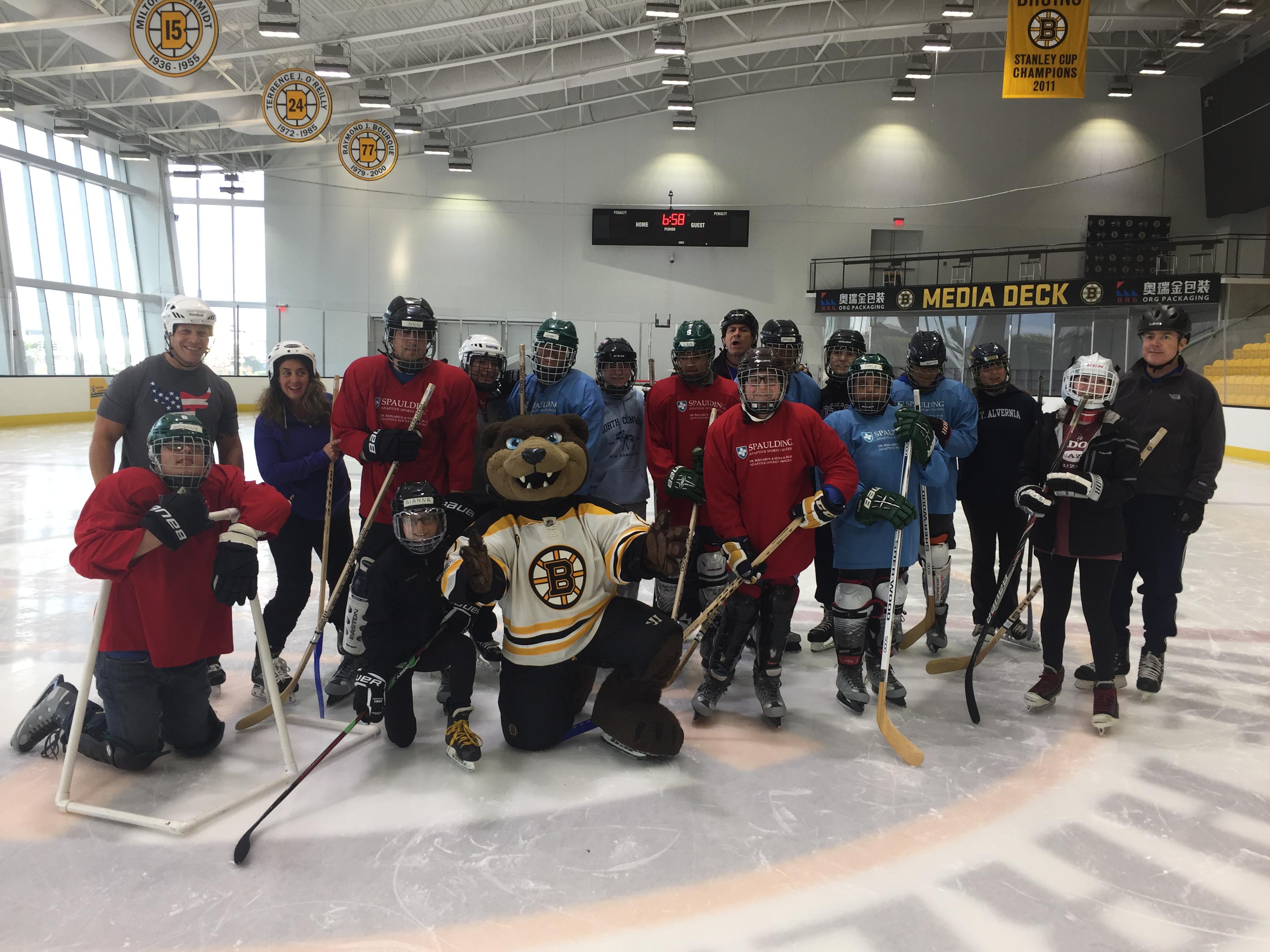 “It started with a handful, six or seven,” says McCummings, who grew up in Jamaica Plain. Now, in sled hockey, they’re up to 14 at the adult level, with an eye toward more across five disciplines.

Thanks to McCummings & Co., there is an Adaptive Hockey Committee in the state of Massachusetts. About seven or eight years ago, as McCummings remembers it from a time he was president of Parkway Youth Hockey in West Roxbury, he received a call inquiring about some icetime for veterans to play sled hockey.

“I said I had some ice available on Saturday nights, and you can have it,” he said to a group that included Dr. David Crandell of Spaulding Rehabilitation Hospital. “And then I said … ‘What is sled hockey?’ He said I should come by that Saturday night, and I was so taken aback by the whole thing that I immediately fell in love with that aspect of the game.”

McCummings grabbed a couple of friends and his son, and a few of his son’s friends, and they started playing sled hockey on Saturday nights. That would lead to an adaptive exhibition at Harvard Stadium.

“And while we were there introducing sled hockey to a bunch of kids with adaptive disabilities, myself, Dr. Crandell, Joe Walsh, Bob Rotondo and a couple of others were standing there we said, ‘How do we get sled hockey going in Massachusetts?'” McCummings says.  “So we met a few times in Newton and proposed what we would need for the funding at the rink and the equipment and it went from there.”

Feeling as if it was the best way to help grow this part of the game, McCummings would eventually trade his stand-up youth hockey work for adaptive hockey.

To see adaptive hockey in any of its forms – sled, blind, special, stand-up amputee, deaf – is to appreciate it. And in theory it’s an easy endeavor to support. The hard part may simply be getting the word out that adaptive hockey is an option in the state of Massachusetts.

“It’s absolutely critical for us to spread the word,” says McCummings. “We had the Paralympic Games, and that brought it to the forefront because more people saw that on TV. But, locally, unless you’re into hockey, it can be difficult. Getting the word out is probably more critical than anything else. If you can get them to the rink, I can get them coming back.”

McCummings even reminds his players the role they play in spreading the word.

Ice time, as in stand-up hockey, is also a challenge – along with, in the case of blind hockey, which needs a one-to-one ratio of volunteer to player, is the volume of volunteers.

Says McCummings: “To get backing from Massachusetts Hockey, the support from members, and Kevin Kavanagh and John Tobin, has been unbelievable – and you couple that with USA hockey, and the people we have with the Boston Shamrocks with Mark Priest. Sled hockey is a collaboration between Mass Hockey, the Boston Shamrocks and Spaulding Rehab. So it’s bunch of moving parts that are supporting each other to get this thing going. I’m hoping I get the same moving parts for blind hockey. Once that’s going, we’ll start special hockey. But you can’t do it without the support of Mass Hockey and USA Hockey. It can’t be done without them or the support staff I have right now.”

Having played hockey is not a requirement to play sled hockey.

“It’s an adaptive sport, so anyone can play it,” says McCummings. “We have quite a few players on our Shamrocks team who have never played hockey.”

“I have also been in conference calls with Perkins [School for the Blind] to see if there is interest in starting a full-time blind hockey,” he says. “I let the kids pick the name for the team and they came up with the term the Boston Blackouts. That’s our Facebook page right now.”

McCummings hopes to have an adult and a youth blind hockey team in Massachusetts by 2019.

McCummings has made a habit of driving down to Connecticut to be on the ice with a group of blind players on Sunday.  Ninety minutes there and back for 90 minutes on the ice.

“It’s the best thing in the world,” he says. “It just can’t be beat. Two of them are 100 percent blind and they make it there, so what’s my excuse?”

“I want to open this game up to anyone who wants to play it,” McCummings said, and his memory of a woman in her 60s falling in love with the game sticks with him. “That’s what I want to do. I love getting someone who knows nothing about hockey coming to the rink – for blind hockey or sled hockey – and I ask how it went at the end of our session and they say it was the greatest thing. I want to bring my passion for the game and make it their passion for as long as they want to do it.”