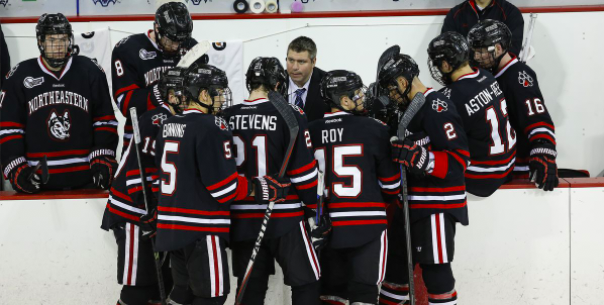 Talent is a precious, and rare, gift. And there's no doubt that pure talent can take a player far.

But talent on its own also has a ceiling. It’s when a player is willing to round out his or her natural fortune with all the characteristics of just a "good" player, that any player can go from great to elite.

“There are some really talented great players,” says Northeastern associate head coach Jerry Keefe, now in his eighth year with the Huskies. “But there is the determination factor, the ability to rise to the occasion at the big times, and the ability to make the players around them better. Those things separate the elite.”

Keefe, who played his college hockey at Providence and will be serving as an assistant for Team USA at the IIHF World Junior Championship later this year, also believes the perfect hockey player, if there is such a thing, is a very smart hockey player, and there’s no time to start on that path than the present. Whether your ceiling is good, great or elite, a hockey IQ is going to help.

Keefe suggests one of the best ways to learn the game is to watch the game.

“I’d really like to see more young kids watch more hockey,” he says. “Whether it’s the Bruins or Sidney Crosby. Watch the little things Sidney Crosby does. How he passes pucks. Where he puts pucks.”

Yes, Crosby is supremely talented, but he also does have savant-like awareness and a creativity in where he goes with the puck – often to increase the advantage his given abilities already afford him.

Determination isn’t just about being on the ice and winning a puck battle, though that comes in to play, too. Determination is also about players being determined to give themselves time to improve and to put in the work to do so.

“Some kids are just naturally gifted, there’s no doubt,” Keefe concedes. “But other kids work at it. Maybe you don’t have the best hands out there, but maybe you develop the best shot because you’ve worked at it so much.”

Young players who are enjoying the game and have an interest in improving should be focused on that enjoyment factor. Today’s OK player could be tomorrow’s elite player. Any message to the contrary can be a disservice.

“It’s extremely detrimental,” says Keefe. “You see so many kids pop at different times. You can find an average player at 15 who is the best player at 18. For me, you never know how determined that player is. You don’t know what’s inside that kid. If you think he or she wants to be that good and maybe they don’t have the talent, but, if they have the determination to be really good, then who knows? That’s a deciding factor for me.”

“You’re getting better every day,” Keefe says. “You can always get better every time you step on the ice. If you have the attitude that, ‘Today, I’m going to get better out there,’ and you do that 365 days a year, you’ll be surprised how much better you’ll get.”

As players progress through the ranks, that determination can mean making the most of a chance.

‘Rise to the occasion’

Keefe, who went on to play parts of four seasons in the minors before his first coaching stint at UMass-Boston, which was followed by Brown and Northeastern, has seen countless players come and go. Average players, good players, great players … and elite players.

How much of this, like determination, is between the ears?

“I think a lot of it is,” Keefe says. “For some reason, when some guys get nervous, they don’t. They want the puck in the big moment. They want to take a big faceoff. They want to be caring the puck up the ice in the big spot. The good ones, they might freeze up a little bit. I think the special ones are the ones who just really want the puck on their stick and they thrive on those opportunities.”

The mindset isn’t easy to shake, either. It’s often hard-wired.

“It never changes for those guys,” says Keefe. “It doesn’t matter if it’s a Monday practice or Thursday pregame skate. I think those guys don’t know how to turn it off. They always want to be good. They step on the ice and the goal is to be the best player on the ice that day. Some guys are really good one day and OK other days. Those elite guys, every day, their goal is to be the best. It’s a constant for them.”

We do hear the phrase frequently: They make their teammates better. But what does an elite player do to make his or her teammates better? It’s getting a teammate the puck in stride on the tape and with the perfect pace for the situation. It’s making plays with and for teammates.

“You put a new teammate with him and all of a sudden he pops,” Keefe says. “That’s because you put him with an elite player. And not everybody can do that. I really think the elite can. The best of the best.”

Throughout all of these pieces, it’s also important to remember that very few of the chapters being written each weekend across the rinks of the region and the country are even partially formed for the full story.

And yet, especially as players grow into their teen years, elite effort can pay off at an elite level.

The difference between great and elite may be riding on it.