1-on-1 with the Lynnfield native on development, adversity, the NHL Draft and his future. 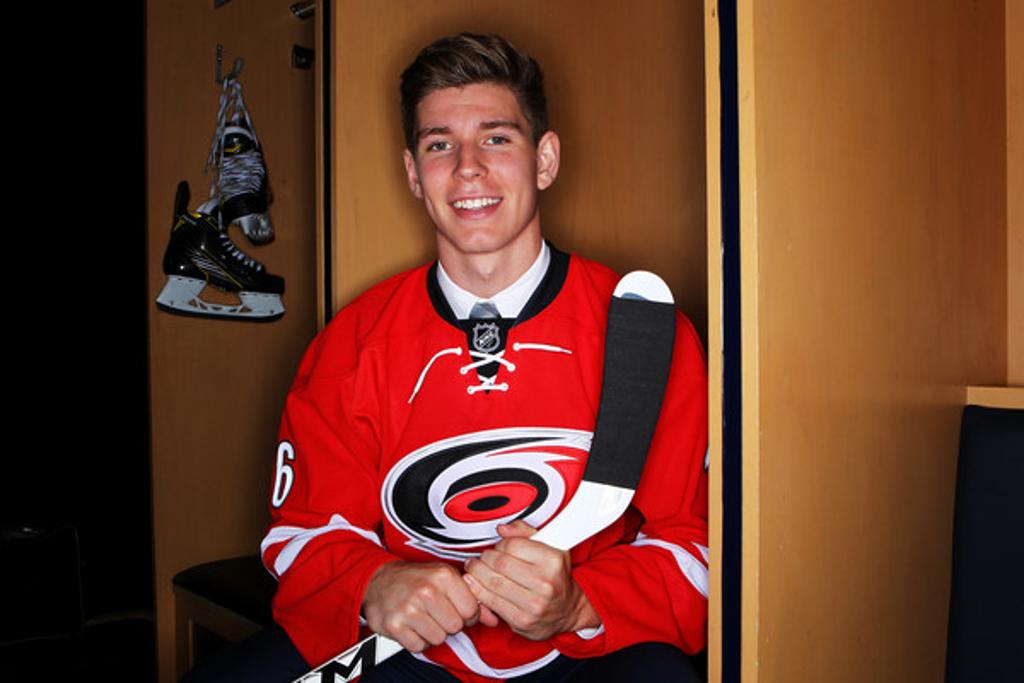 In talking to Lynnfield native Matt Filipe, one is pretty quickly left with the impression he is, in addition to being a very talented hockey player, a bright and composed young man off the ice. He likely could have played his college hockey at any number of places, but the son of a former Northeastern University hockey captain chose the Huskies.

We caught up with the Malden Catholic alum – after playing in the USHL this past season, he returned to graduate with his friends – and talked about the life-changing decision to play in the USHL, his development roots and the Carolina Hurricanes, who selected him No. 67 overall this past June.

Mass Hockey: Matt, what are some of your earliest memories of the sport?

Mass Hockey: Did you have a favorite rink growing up?

Filipe: I’d say East Boston. That was our home rink with the Middlesex Braves. I just loved going in there every Saturday or Sunday. You’re right on the water there and, occasionally, we’d have cookouts on the beach after.

Mass Hockey: These days, after successful season on the ice, what are you doing in terms of hockey this summer?

Filipe: I put the skates away for about a month after the season in the USHL, but I got back on the ice and I’m skating three times a week over in Wilmington with a good group of guys. And I’ve been in the weight room ever since I got home; I haven’t really taken any time off from that. It was a long season out there in Cedar Rapids. There was a lot of hockey played for me there from the end of August until the end of April. So I put the skates away for a month, but I did get right back to the swing of things.

Mass Hockey: With a player of your caliber, you have options. What made you think about the USHL?

Filipe: When I committed to Northeastern a couple of years ago, the USHL Draft was coming up soon. I talked with the Northeastern coaches a little about where I might go, and you never really know until you get picked. But that’s when I started thinking about it, and I had a feeling that, whoever picked me, I was going to go out and play for them. 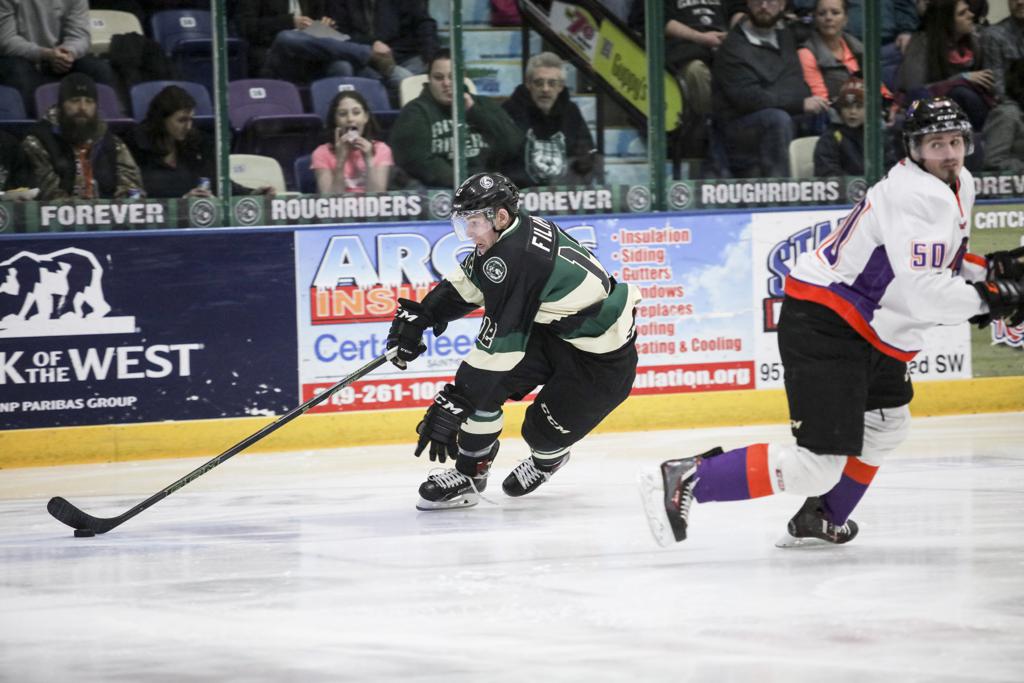 Mass Hockey: Once you were drafted, what were the next few steps?

Filipe: When they drafted me in my sophomore year and I decided to go back to Malden Catholic, I could have tired to make the team then and possibly play out there my junior year, but I wanted to stay at Malden Catholic and be the captain. Obviously, we had a good run going there at MC and I wanted to go back. I just wanted to stay at home and play with my buddies one last time before moving out there for my senior year. I think it was pretty much set in stone that I would go out there my senior year.

Mass Hockey: What is a day in the life of a USHL player?

Filipe: I think there were eight or nine of us still in school, only one junior, and the rest were seniors. We would get up and go to school from about 8-12:30, then head to the rink after, and you’re pretty much at the rink until 6 o’clock. You have practice, you go to the weight room, you hang out with the boys.

And they did a great job at Cedar Rapids with the school system. You hang out with the kids in school, and, obviously, your teammates, and you meet some more kids out there, too. It’s a pretty cool experience.

Mass Hockey: Is doing well in school important to you?

Filipe: Absolutely. I had pretty good GPA at Malden Catholic when I was there, and, obviously, Northeastern is a great school, and I wanted to keep those grades up. Eventually, hockey is going to come to an end. Education has always been a priority for me. I didn’t take school lightly out there, and I did pretty well. Our coach monitored that and wanted to make sure that, when it was time to move on to college, there were no problems. We had time to study and time on the bus and to do some things. We all got through it pretty well out there.

Mass Hockey: What was a good game night like at the rink in Cedar Rapids?

Filipe: A good night for us was 4,000-5,000. The atmosphere out there was great. They had the cowbells going every night and they’re really passionate out there. They love their RoughRiders. There were about 4,000-5,000 fans for a few months straight, so it was pretty cool.

Mass Hockey: That’s a pretty good deal for a high school senior, no?

Filipe: Obviously, at Malden Catholic, playing in the Garden in front of all those people – it’s kind of nerve-wracking – but you can get used to it. It took a little time to adjust to that league, but having that support in the stands definitely helped. 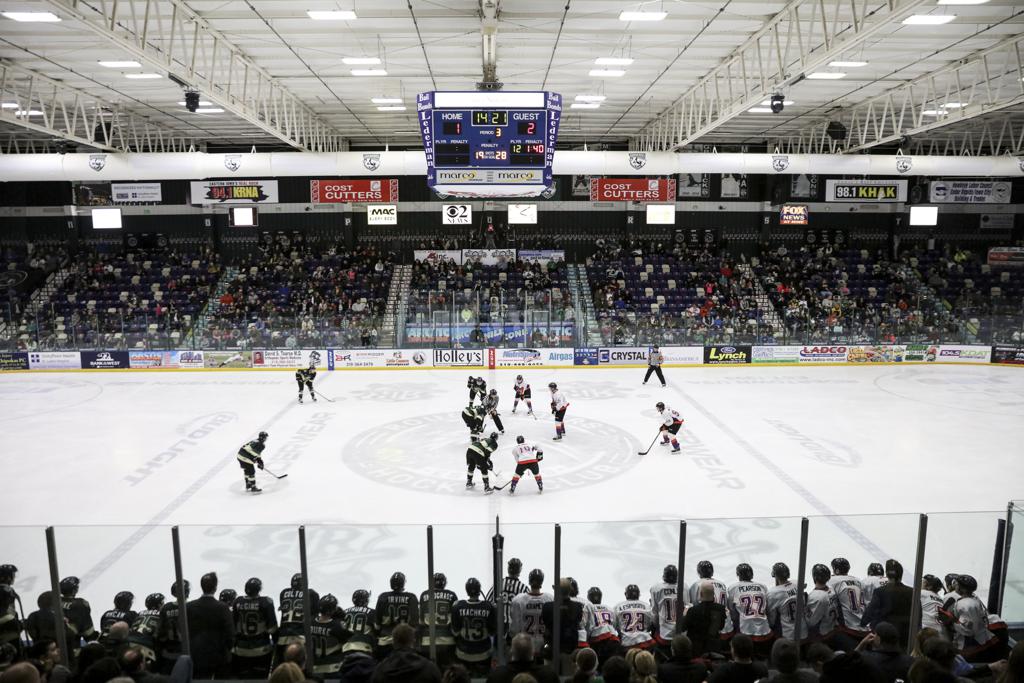 Mass Hockey: How different is the brand of hockey in the USHL from what you had experienced at Malden Catholic?

Filipe: I think the overall speed of the game is the one big thing. Everyone is much faster out there – not just the speed of the players, but how quickly you have to think and make decisions. And you have to make the right play. Plus, the guys are bigger and stronger, too, and older. That was something I had to adjust to and noticed right away.

Mass Hockey: It’s pretty clear this felt like the right decision for you. Is that the case?

Filipe: Right away, I kind of thought when I committed to Northeastern that the league would be the best place to play. Obviously, it’s a great league, the best junior league to play in before going to college. When I had the chance to play in it, it was really a no-brainer for me. And, obviously, they’ve had a lot of draft picks these recent years.

It’s just the best option for any kid thinking about going to college – playing a year or two in the USHL, whatever it may be, before you go off to school. It helps you prepare and helps realize you have to be an everyday player, on and off the ice, and how responsible you have to be.

Mass Hockey: Did you have any dips in production that you had to overcome?

Filipe: It’s a lot different than high school, and I think I started off a little bit slow early in the year as I was trying to adjust to the competition. But, as the season went on, I think I got better. You know, it’s not all about points and that’s something I learned this year – you have to be good in your D zone and all over the ice. It’s more of an overall game out there. Playing defense is something I had to do a lot more of this year than in high school. Just play an overall game, and the production will come along.

Mass Hockey: Of course, you played for a coach who has made an impact on so many hockey players’ lives, too.

Filipe: Yeah, Mark Carlson. I think next year will be his 17th year, and he’s a great coach. He got on me early on and he let me know, right away, he expected a lot of me, so I think that really helped me. He was hard on me, but I took it the right way and took his advice. He was great all year. He was tough to play for, but, if you do what he asks and you go out and compete every night, he’ll like you.

Mass Hockey: Do you believe the USHL and Carlson had a lot to do with your being drafted?

Filipe: Definitely. Going into my draft year, I could do one of two things – I could go out and have a good year and potentially get drafted pretty high, or go out and not have a great year and not get drafted. My dream is to play in the NHL, so, going out there, I knew, with the opportunity I had, I wanted to take advantage of it. He’s helped me throughout the process, and ultimately, I think that’s how I got drafted.

Mass Hockey: What was the draft experience like for you and your family?

Filipe: I was actually there. I went out there with my family, got out there on Friday and went in and watched the first round. That was pretty cool to see. On Saturday, we just kind of hung out there and waited for my name to be called.

Mass Hockey: Did you know it was going to be Carolina?

Filipe: I had no idea. I met with them at the combine, but I hadn’t talked to them through the year. I really didn’t know who it would be, and I was a little bit surprised, but I couldn’t be happier. It’s a team and an organization that’s headed in the right direction.

Mass Hockey: Turning back to college, did you ever consider leaving Boston?

Filipe: No, not really. My dad played at Northeastern, so I grew up going to those games my whole life – just being around that rink, spending time in the locker room with the players when I was a young kid. Northeastern just felt right for me. All along, my whole life, that’s where I wanted to go. I had my eyes set on that pretty early on.

Mass Hockey: What was your dad’s experience like at Northeastern?

Filipe: He was on the only team to make it to the Frozen Four, he won a couple Beanpots, ECAC titles. Obviously, he has his own legacy there and I hope to make mine.

Mass Hockey: Going forward, what are your goals at Northeastern – to develop, to get closer to the NHL, to win?

Filipe: The first priority is winning. Every team you’re on, you want to go out and do whatever you can to win. That’s the main priority. But, also, like you said, I want to grow as a player and develop. And that should help me get to the NHL. But I think, right away, I just want to go in and do whatever I can to help the team win.

Mass Hockey: What do you have in store for the rest of the summer?

Filipe: I move into Northeastern in early September, so I’ll be on the ice and in the weight room, preparing for the season.