Wondering what happened during the Annual Meeting? Find out what you missed!

PLYMOUTH, Mass. - This past weekend Massachusetts Hockey hosted its 42nd Annual Meeting, celebrating a number of new initiatives and adding seven inductees to the Hall of Fame. he highlight of the general meeting on Saturday morning was a presentation from Co-Founder and President for Concussion Legacy Foundation Chris Nowinski. He captivated the board on concussion and safety awareness after suffering serious concussion complications from his career as a football player and professional wrestler. He was also awarded the Dr. Alan Ashare Safety Award from Massachusetts Hockey later in the evening.

The bid process for the 2016-2017 Massachusetts Hockey State Championships took place during the general meeting. Dates and locations will be announced at a later date pending final review from the tournament committee.

During the general meeting, Executive Director Kevin Kavanagh introduced Massachusetts Hockey’s partnership with the Positive Coaching Alliance. “Positive Coaching Alliance (PCA) develops BETTER ATHLETES, BETTER PEOPLE through resources for youth and high school sports coaches, parents, administrators and student-athletes,” as stated on their website. Any program interested in hosting a workshop will be given a subsidy if set up through Massachusetts Hockey, more information will be available shortly.

Ron DeGregorio, former president of USA Hockey and current co-chair of the USA Hockey board, spoke during the general meeting highlighting the new QuickChange goalie equipment system. Massachusetts Hockey Goalie Development Coordinator Brian Daccord agreed with DeGregorio’s sentiments on the exciting goaltender program. Massachusetts Hockey will be sending out information to associations about how to purchase the equipment at a discounted rate.

For a second season, the Look Up Line subsidy will be offered to Massachusetts ice hockey rinks. Chair of Safety Committee Tom Smith highlighted the effectiveness of the line with an engaging participant video. The Boston Bruins were represented by Mike Dargin, manager of youth hockey development. He showed how the Bruins are teaming with Massachusetts Hockey to promote the license plate program, the Little Bruins Learn to Play Hockey Program, TD Bank Mini 1-on-1 and this summer’s street hockey training.

Also recognized were all the Massachusetts Hockey volunteers who have dedicated their time and effort to the organization. Please see the list below for their names and years of service.

In the evening on Saturday, Massachusetts Hockey and Master of Ceremonies NESN’s Tom Caron presented their Annual Awards and inducted seven new members into the Hall of Fame.

The Milt Kauffman Award was presented to Jennifer Glynn (Framingham). This award is presented annually to an individual who has demonstrated a dedication and commitment to youth hockey in Massachusetts through her officiating work.

Bruce Newell (Arlington) was given the Ron and Jo Difilippo Registrar Award. The award is presented annually to a registrar in Massachusetts Hockey who has shown the dedication and commitment to the position that was embodied for many years by Ron and Jo Difilippo.

The Duke Kumpel Special Achievement Award was presented to Mark Hickey (Waltham). The award is presented annually to a member who has taken a leadership role in advancing Massachusetts Hockey. The business meeting concluded the weekend on Sunday morning. Massachusetts Hockey's Fourth Vice President Phil Zona was awarded the USA Hockey William Thayer Tutt Award in Colorado Springs at the beginning of June. His induction video was played for the board and he was recognized for his accomplishment. To see the original video please click here.

Lastly, the Legislative Proposals decisions were put to a vote. Please click here to see the final results of the proposals. 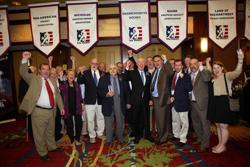 The below information is directly from USA Hockey:
COLORADO SPRINGS, Colo. – USA Hockey’s four-day Annual Congress finished here last weekend, highlighted by the news of a record number of players in the 2015-16 season, the addition of a new Flex Hockey option for associations beginning in 2016-17, and added support for development of goaltenders nationwide.
USA Hockey’s Board of Directors learned that 542,583 total players were part of the organization in 2015-16, the most in the 79-year history of USA Hockey. Overall, it represents an increase of 9,411 players from the 2014-15 total. Also, the number of coaches (56,515) and officials (23,186) grew from 2014-15, meaning that USA Hockey had a record 622,833 players, coaches and officials in 2015-16. Finally, by adding in the 498,412 non-participants (defined as administrators, team managers/volunteers, and parents), USA Hockey finished with a record universe of 1,121,245.
“The success of our sport depends on our volunteers and we’re fortunate to have what I believe to be the very best volunteers there are,” said Jim Smith, who completed his first year as USA Hockey’s president. “Scott Blackmun (U.S. Olympic Committee CEO) said on Thursday at our Town Hall session that USA Hockey is at the top of the ladder when it comes to national governing bodies and that’s a credit to our volunteers and certainly our professional staff as well.”
“It’s terrific to see our organization continue to grow,” said Dave Ogrean, executive director of USA Hockey, “particularly the number of players, and at all age levels. We work hard to provide a safe and fun environment for everyone and on the youth side, an age-appropriate environment where every player can reach his or her full potential.”
At Saturday’s Board of Directors meeting, the Board unanimously voted to formalize a new structure at the recreational level called Flex Hockey. The initiative is designed to keep players in the game and provide opportunities to play for enjoyment, fitness, relaxation and fellowship.
The focus is on creating a fun, safe environment where participants can be active in the sport of hockey with flexible participation commitment. Play will have no body checking and programs could allow optional rosters, combined age categories and age-appropriate playing rules.
“While associations have always had the ability to have no-check hockey, and some have offered it, we wanted for put together guidelines from a national standpoint for a more formalized opportunity,” said Dave Klasnick, vice president of USA Hockey and chair of the organization’s Youth Council. “We took the feedback from those throughout the country and feel like this Flex Hockey option is a positive step forward.”
On the goaltending front – led by Phil Osaer, USA Hockey ADM goaltending manager; Kevin Reiter, USA Hockey national goaltending coach, Hall of Fame goaltender John Vanbiesbrouck and Ron DeGregorio, co-chair of USA Hockey’s Board of Directors – attendees learned details of the effort to populate every affiliate with goaltending development coordinators to help further training and education of goaltenders and coaches. In addition, the new quick change goaltending pads that allow youth players at the entry level to transform into a goaltender in under a minute were showcased.
Elections also took place at the Board meeting with Gavin Regan (Potsdam, N.Y.) re-elected as Vice President and chair of the International Council; John Vanbiesbrouck (Spring Lake, Mich.) re-elected as Vice President and Junior Council chair; and Bill Hall (Ocean Isle Beach, N.C.) re-elected as Secretary. In addition, Shelley Looney (Buffalo, N.Y.) and Bruce Urban (Queen Creek, Ariz.) were both elected to Director At-Large positions and Mike Trimboli (Massena, N.Y.) was elected to serve as Director Representative to the Executive Committee. In addition, Tom Koester (Lafayette Hill, Pa.) and Joan Mariconda (Edmond, Okla.) were elected Director Emeritus.
NOTES: USA Hockey President Jim Smith presented President’s Awards to Paul George, Joe Eppolito, Ashley Bevan, Paulette DiGiacomo and Ben Smith … The Board recognized Ron DeGregorio, co-chair of USA Hockey’s Board of Directors, for being elected to the International Ice Hockey Federation Council.