Over $50,000 Given to Local Programs from Invest in Youth License Plates

Massachusetts Hockey alongside the Boston Bruins Foundation are proud to present over $50,000 to award recipients of the Mike Cheever Grow Hockey Grant program.

Cheever grant funds are raised through the “Invest in Youth Hockey” license plate partnership between the Boston Bruins and Massachusetts Hockey. The purpose of Mike Cheever's Grow Hockey Grant is to seek, fund, and share innovative methods for growing ice hockey participation in local youth organizations, Girls/Women and Disabled Hockey Programs within Massachusetts.

John Sutich, Charlestown Youth Hockey president, is looking forward to subsidizing costs to make a more affordable program for the community. “Our program is undergoing reengineering and a renaissance. About two years ago, we had less then 30 kids under the age of eight playing hockey. We started a Learn to Play program called Micro Hockey, which is aimed at five to seven year olds having fun using the USA Hockey ADM model. Two years in we had about 65 kids playing hockey and with the help of this grant we are looking at 90 kids under eight years old playing in our program,” said Sutich.

Massachusetts Hockey named this grant program after Mike Cheever because it is aimed at achieving what Cheever dedicated his life to: giving more kids the opportunity to play the game.

“There is no other way more fitting to honor my father than to name this growth initiative program after him, and without the support and contribution of the Boston Bruins, none of this could be possible. It did not matter what the level of talent, my Dad, just looked to give every kid the opportunity to play and made sure they had fun doing it,” said daughter of Mike Cheever and grant committee chairperson Ellie Cheever.

“This grant will allow us to decrease our costs so we can keep expanding our program. Helping the kids learn to love the game of hockey just like I did as a kid,” said Phil Tura, Cape Cod Canal Youth Hockey vice president.

In the 13 years that the “Invest in Youth Hockey” plates have been on the road, the program has raised over $1.75 million for grassroots youth hockey efforts throughout the state. You can purchase your Boston Bruins "Invest in Youth Hockey" license plate at all full-service Registry branches or online by clicking here. 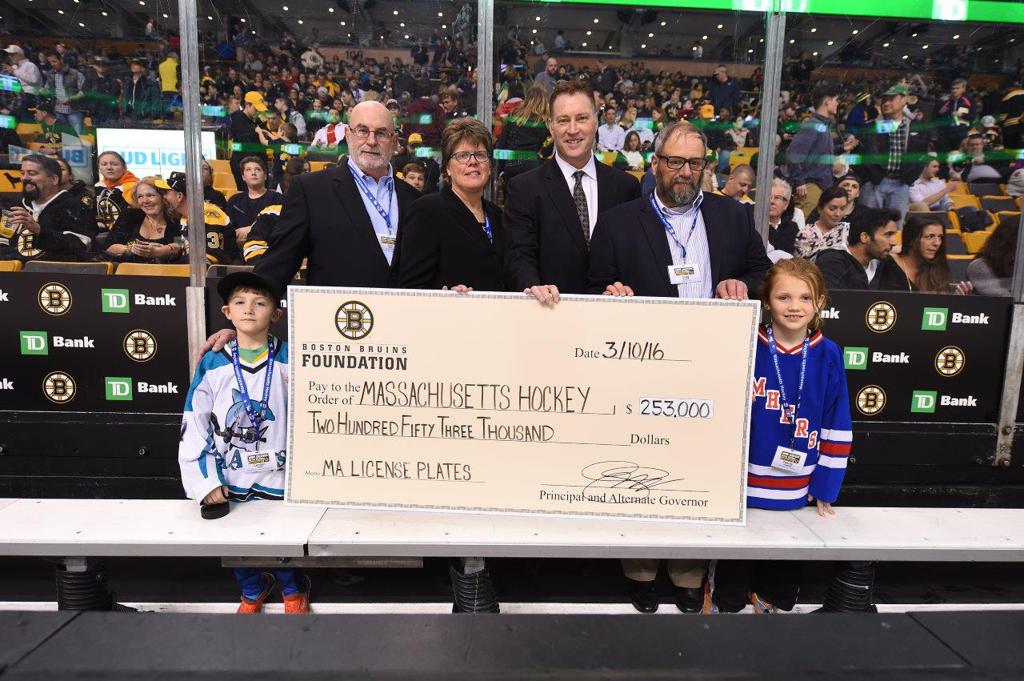 The Boston Bruins Foundation presented a donation of $253,252 to Massachusetts Hockey at the Bruins vs. Hurricanes game on Thursday, March 10.