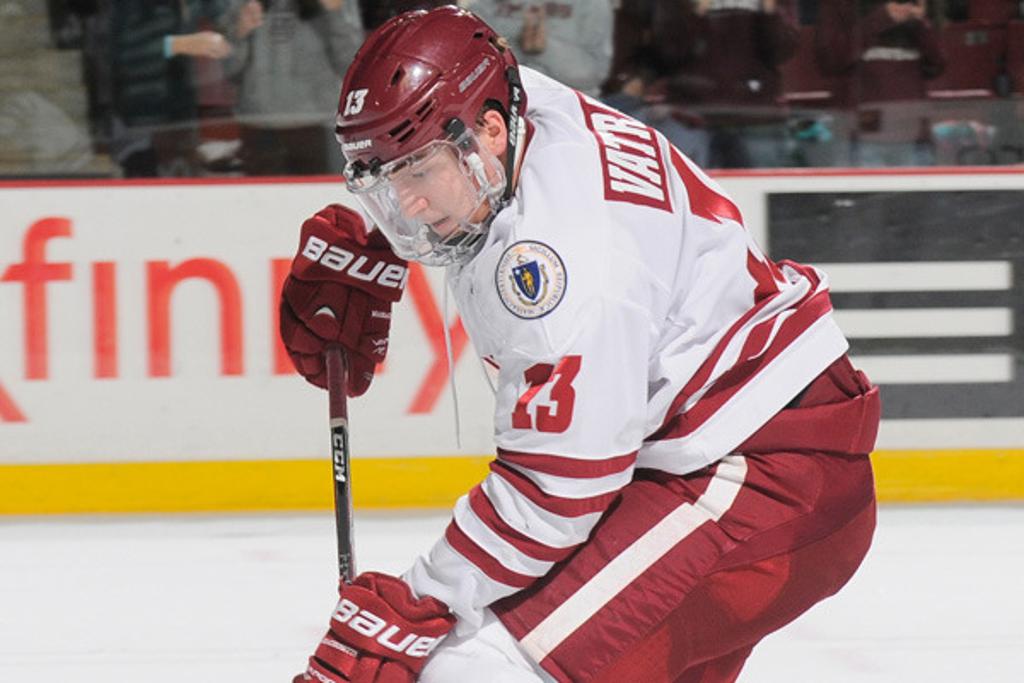 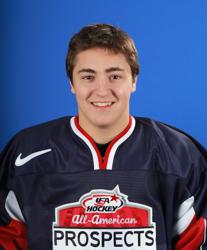 It all sounds too good to be true. We know the odds are long. Barely possible. A dream, at best. We spend a good deal of time reminding parents that their sons or daughters very likely aren't going to play Division I college hockey and move on to sign a professional hockey contract. And, if they did beat all those odds, they certainly couldn't count on doing either very close to home.

Frank Vatrano can see it. In fact, he’s living it.

The East Longmeadow native, the former Boston Junior Bruin, the shooting star from the University of Massachusetts, signed with the Boston Bruins at the conclusion of the Minutemen season.

If you follow UMass Athletics on Twitter, you would have seen in your timeline the shot of Vatrano sitting in a big leather chair and making it official on March 12. A day later, the Bruins announced the signing. A day after that, Vatrano turned 21.

Yes, the past month has made for a whirlwind for Vatrano.

“It's a surreal feeling,” he said recently. “I don't know that it really has sunk in. Obviously, it's a dream come true.”

He's now living in Providence, where his pro career is underway as a member of the Providence Bruins. On March 27, he made his pro debut in Hartford.

"It was unbelievable," Vatrano said the following day. "As a young kid, pulling on a Bruins jersey has always been a dream of mine. I just used the first couple shifts to get the jitters out. After that, I felt comfortable out there. I felt I fit in well, and I thought I made plays. It was definitely a night I'll never forget."

There was a time that Vatrano, who had distinguished himself as one of the nation’s best 1994-born players by accepting an invite to USA Hockey’s National Team Development Program in Ann Arbor, Mich., wasn’t sure he’d experience the thrill of playing professional hockey.

“Everything I've been through, I never really thought I'd be put in this position, ever,” he said. “I left BC [Boston College]. I didn't really know where my hockey career was going then. I didn't know how long I was going to be sitting out or when I was going to play next. The biggest thing with me was just staying positive and knowing at the end of the day I was going to end up playing somewhere, someday.”

Vatrano, the youngest of four boys from a close-knit family, wound up awfully close to where he started, in Amherst.

“Things eventually didn't really work out for me at Boston College, and, as soon as I left there, I wanted to get on the phone with UMass and tell them I wanted to go there,” Vatrano said. “It was a good decision and I loved it there.”

At UMass this past season, Vatrano scored a team-high 18 goals in 36 games, and his 194 shots ranked second in the nation.

That shot. It has always caught the eye.

“He's got a really hot stick,” said his former NTDP coach, Danton Cole. “I mean, the puck comes off his stick really well, and it's a goal-scorers shot.”

“He's just got a ton of energy," said Cole. "He just wanted to play hockey and take slap shots and get after it. We really enjoyed his energy around here. He's just a very happy and positive kid. Really fun to coach. The guys loved him. He kind of seemed to be in the middle of everything.”

“There are a lot of things the guys had to work on when they got [to Ann Arbor], the forwards especially,” Cole said. “What they really have to do is embrace the part of the game that you have to play without the puck. And Frank got really good at it. Late in games, he was unbelievable. He turned himself in to a pretty good hockey player in that sense. He just kept finding ways to make himself valuable.”

Vatrano’s own scouting report has more depth, too.

“I like to take care of my D-zone first, but I think most people won't notice that part of my game,” he admitted. “Most people notice the part of my game that's developing offense off of my shot. I have a heavy shot and that's the way I like to create offense, get in the dirty areas and go to the net because at the higher levels that's where most goals are scored.”

“I think Frank has a chance to play in the NHL, for a lot of reasons,” Cole said. “He’s not the tallest guy, but he's thick and he maintains his speed and quickness. He has a chance. And he's going to get his shot.”

Vatrano is now closer than he's ever been.