What Norm Bazin Looks for at UMass Lowell 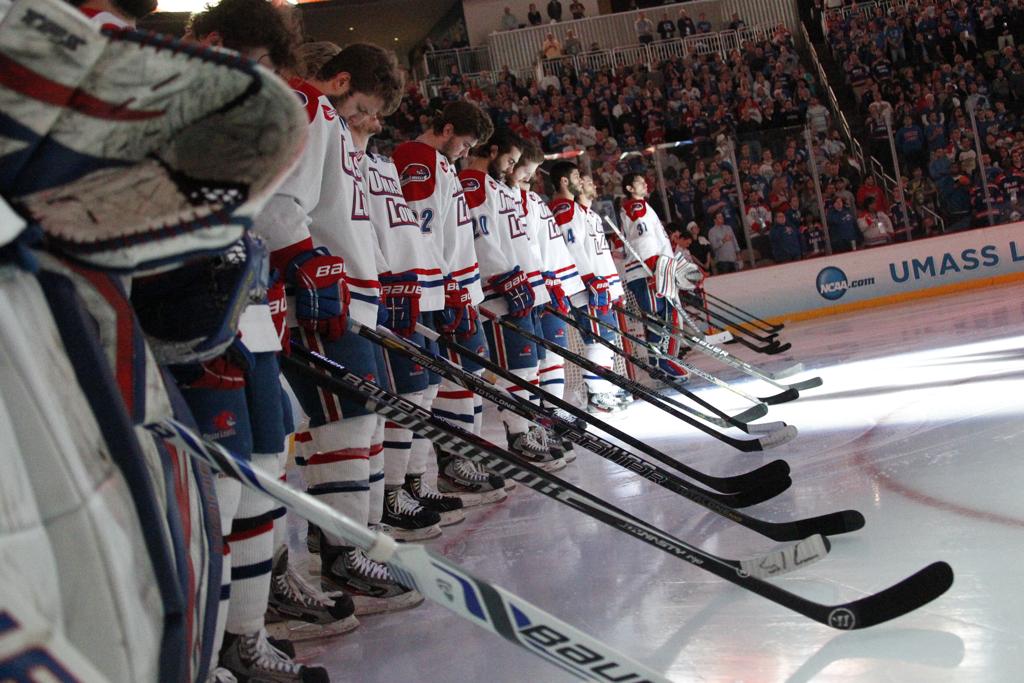 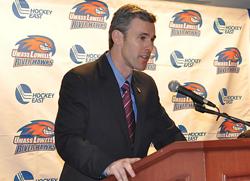 “We look after the details, and we make sure we're prepared and ready to execute our game plan to the best of our ability every given night.”

That's where, with more than a dozen freshmen, head coach Norm Bazin has UMass Lowell off to an 8-3-3 start and top-10 USA Today/USA Hockey Magazine ranking.

At the end of the 2013-14 season, the River Hawks watched three key players sign contracts with NHL teams, and yet the turnover hasn’t stalled the program’s progress in 2014-15.

“We recruit kids that fit our school,” says Bazin, who was an eight-semester Dean’s List student and hockey standout at Lowell from 1990-94. “I think finding Lowell-type guys is a real key for us.”

And what is a Lowell-type guy?

“A person of high character, who's tenacious and who has a very high compete level,” says Bazin. “We're very proud of our university, we're proud of the way we play, and we're very proud of how aggressively we play when we're playing well.”

Competing for a title in Hockey East, a conference that boasts a number of nationally recognized powers, certainly isn’t easy, but Bazin, who is an inspiring story unto himself, credits his players for not letting some of those perceived long odds beat them.

“We don't worry as much about what other people have because, traditionally, [Hockey East rivals] have always had a lot of skill, so we play to our strengths and we concentrate on ourselves,” says Bazin.

Though UMass Lowell isn't without its excellent Hockey East finishes, the program has also had its struggles – as recently as 2010-11, it won only five games. Enter Bazin, who had been running his own program at Hamilton College after assistant coaching stints at his alma mater and at Colorado College, and the River Hawks won 24 games the following season.

“I think that we're a hard-working staff,” says Bazin, who was quick to point out the contributions of assistant coaches Jason Lammers and Cam Ellsworth. “We look after the details, and we make sure we're prepared and ready to execute our game plan to the best of our ability every given night.”

As of early December, the River Hawks hadn’t dropped a game in conference play, and, after 14 games overall, five players had earned double-digits in points (led by freshman C.J. Smith and sophomore Joe Gambardella, followed by four more sophomores) and 10 had at least seven points.

“It's really important that our guys focus on the process,” Bazin says. “And getting better every week. If they lose track of that, we're humbled very quickly. However, when they keep their eyes on the prize and on improving every week, we usually play pretty well.”

Though he’s not much for polls – not until February, anyway – Bazin wants to see forward progress into the New Year, as he does from game to game and throughout the season. He’s looking forward to gaining even more insight into his young team as 2015 approaches.

“I can tell you in a relatively small sample that I like our work ethic,” he says. “I like the way we’ve responded after mediocre efforts. I think we’ve been able to play the same on the road as we have at home, which is a good sign for a young club. I'm encouraged by the start, but I do realize it's only a start.

Who do you think will win Hockey East this season? Tell us on Twitter at @Mass_Hockey!