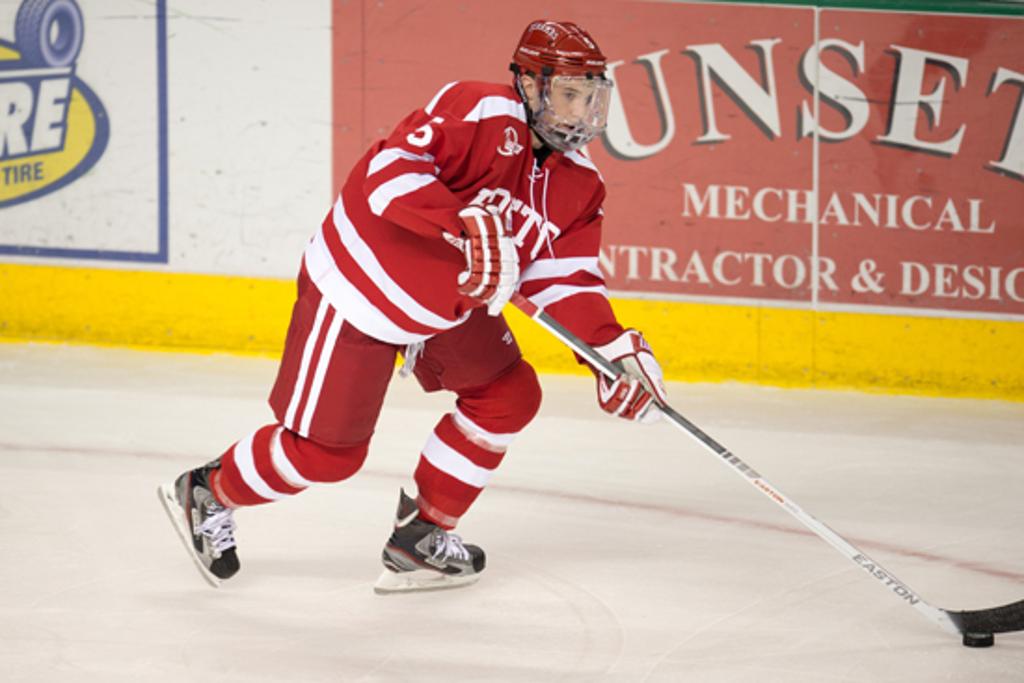 Well, leadership takes many forms, and captains come in all shapes and sizes. Look no further than Boston University captain Matt Grzelcyk. Grzelcyk, a self-described “quiet kid” who’s listed at 5-foot-10 and 176 pounds, had never before worn the ‘C’ before, but he finds himself wearing the letter proudly this season for one of the nation’s most prestigious college hockey programs.

We caught up with Grzelcyk recently, and it seems the ‘C’ fits him just fine.

Mass Hockey: What does leadership mean to you?

Matt Grzelcyk: For me, personally, someone who can lead by example and not necessarily speak up all the time – but, when they speak, it's meaningful. That's what I try to do. I try to speak at the right time and, hopefully, my teammates follow my lead.

Mass Hockey: What does it mean to be a captain, particularly at Boston University, for a Charlestown kid?

Matt Grzelcyk: It's truly an honor. My dream was always to come to BU. But to be named captain is the highest honor I've ever been paid, especially just being a junior. So I'm extremely excited and just very thankful to have the support from my teammates and coaches who had the trust in me to be named captain.

Mass Hockey: Have you been a captain before? Did you grow up on your youth hockey teams always in that sort of role?

Matt Grzelcyk: No. To be honest, no. I've always been quiet kid. But I think the only real letter I've ever had was at the World Juniors this past winter, as assistant captain. Having that experience definitely has helped me this year.

Mass Hockey: You mention being a quiet kid. Are there different kinds of leadership?

Matt Grzelcyk: Yes, definitely. You don't always have to be the most vocal guy. That's what I try to do. We have two seniors on the team right now, and they're pretty vocal in the locker room. I don't have to be as talkative as them. I just try to chip in here and there and a lead by example.

Mass Hockey: What's the best thing about being a captain?

Matt Grzelcyk: Just having the ‘C’ on your jersey, really. And being able to understand that I have the trust from my teammates and coaches is kind of a cool feeling that gives you a little bit of confidence going on the ice.

Matt Grzelcyk: I don't think there’s anything bad about it, to be honest.

Mass Hockey: What would you tell a young player about what it means to lead, even if they aren't particularly vocal?

Matt Grzelcyk: Just do the right things. Do the right things. For me, personally, I just try to continue to act the right way. You don't always have to speak up all the time or change your personality. You just have to talk sparingly and hope that everyone listens.

Mass Hockey: I think you've hit on something interesting there, that you don’t have to be someone that you're not in order to be successful.

Matt Grzelcyk: Exactly. That's something that was made clear to me in talking to the coaching staff, and even my parents, who told me I was voted captain for a reason. The letter shouldn't change my personality.

Mass Hockey: Is wearing the ‘C’ a byproduct of leadership? It doesn't just accidentally happen, right?

Matt Grzelcyk: I'm not really sure. Maybe they just drew out of a hat [laughing]. I've had the privilege of having some great teammates the past few years, so I've kind of taken from their leadership.

Mass Hockey: What would you tell a younger player about any sort of path to wearing the ‘C’?

Matt Grzelcyk: Just hard work. Persistence. Week in and week out. Just work hard on and off the ice, and do the right things. Don't get caught up socially and stay on top of your work academically.

Mass Hockey: What kinds of kids aren't likely to be captains? Or leaders?

Matt Grzelcyk: I feel like everyone could be. But I do see that some guys go out of their element or are immature. We don't have a problem with that on our team. The freshmen are mature and handle themselves off the ice. I think guys who can't eliminate distractions can get in trouble that way.

Mass Hockey: Have you learned anything from life as a captain?

Matt Grzelcyk: I'm kind of learning every day. I don't feel like it's too much different, honestly. I try not to think about it or get caught up in it. I'm just another player on the team, and I'm not above anyone else on the team. It's just great to come to the rink every day and work with my teammates.