So what really is best – and safe – for your hockey player?

Walking down the beverage aisle at the grocery store or gas station can be overwhelming. Today’s athletes – and their parents – are littered with a variety of options to quench their thirst before, during and after a hard workout. Each version claims to be “the best,” and with a multitude of “explosive and delicious flavors,” it can be even harder to choose what to sip on.

So what really is best – and safe – for your hockey player? Here are five simple rules to help you stay hydrated and maximize performance:

1.) Know What You’re Losing – Despite being a “cold-weather sport,” hockey players will likely lose at least 1 liter of fluids during a game. Probably more. Athletes will burn a mix of electrolytes, carbohydrates and fat while training and competing. Those nutrients need to be replaced.

“Most sports drinks focus on supplying carbohydrates in a fast-digesting form to supply energy to hard-working muscles so that you have something in the tank until that last drill or shift,” Ellis details to USA Hockey. “Sports drinks also supply some of the components we lose in sweat (fluids, sodium, potassium) and intentionally avoid ingredients that could speed up the rate of fluid loss like caffeine.”

2.) Sugar, Sugar – The addition of carbohydrates in sport drinks also can tip the sugar scale. A 150-calorie sports drink can have has much as 10 teaspoons of sugar in it, oftentimes leaving young players with an upset stomach.

Just like avoiding sugary snacks and other beverages, there’s a simple way to get the proper sports drink. Check the label to make sure it isn’t too close to the sugar content of a juice or soda.

3.) Game Flavor – The big sell for sports drinks is the flavor. Mountain Blue, Fruit Punch, Lemon and Lime, the list goes on. Be aware that with most flavor comes extra sugar.

If you want a flavored alternative, look for low-calorie fitness water or flavor-enhancers that usually contain fewer than 10 calories per 8 ounces. These won’t put you at risk for too much sugar intake before practice or the big game.

4.) Watch the Caffeine – Energy drinks are becoming an increasingly popular and tempting option for athletes today. What do most of those contain? Caffeine. While a burst of energy sounds helpful, it usually only lasts a short time before an energy crash. But that’s not the only reason athletes should be weary. Caffeine is a diuretic, which speeds up the dehydration process. It’s addictive. It can also lead to insomnia, which can be detrimental to a child during a critical growth period.

Jeff Winslow worked in the Syracuse University football program before taking an athletic trainer position at the University of Minnesota. His advice? Stay away from energy drinks.

“These [energy drinks] do not have a place in athletics,” Winslow cautions. “Many of these are marketed toward youth, and I would never recommend them.”

“And adults, please realize that even at the collegiate level, we are not allowed to supply caffeine to athletes,” Ellis notes. “Please think twice about supplying any source of caffeine to someone else’s child on the team. No other generation of young athletes has ever witnessed such a cavalier attitude about using stimulants as the youth we are working with right now.”

5.) Balance is Key – Like with anything, staying hydrated is a balance. Water is a necessity, but you need to replace the salt lost via sweat. Drinking too much water during workouts causes sodium levels in blood to drop too low. If you’re exercising for more than one hour, rehydrate with a sports drink to replace those electrolytes.

On average, an athlete should drink 4-6 ounces of liquid every 15 minutes during intense periods of activity, but there is not magic number. Most physicians agree that hydration needs depend on a number of factors, including size, sweat production, climate, etc. One way to monitor hydration is to weigh yourself before and after a workout to determine how much was lost. 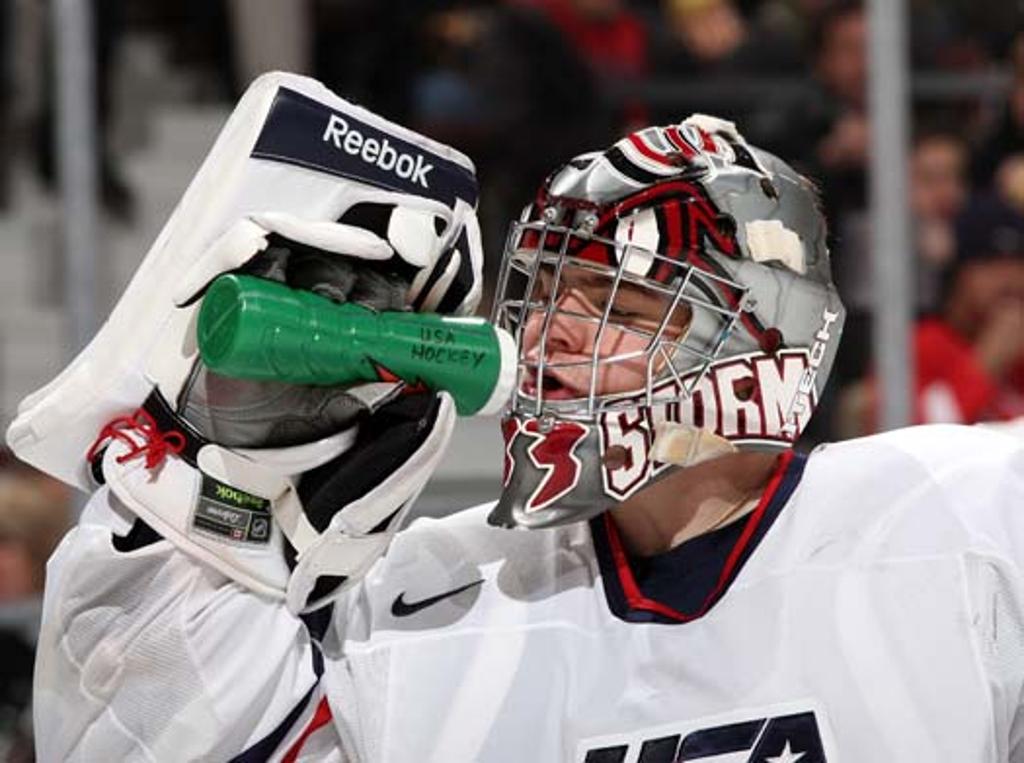