When people think of hockey in Massachusetts, they tend to focus on the Boston Bruins and the franchise's influence on the game in the Commonwealth and throughout New England. However, the NHL franchise isn't the only nationally renowned hockey team in Massachusetts.

College hockey is as much a part of the game's fabric in Massachusetts as any. This weekend, two teams from Massachusetts will begin competing in the NCAA Division I Men's Ice Hockey Tournament. Both Boston College and University of Massachusetts-Lowell's hockey teams begin their quest for a national championship in the Northeast Regional, beginning Saturday at 4 p.m. at Worcester's DCU Center.

"(College hockey) in Massachusetts is very strong," UMass-Lowell coach Norm Bazin said. "Just looking at our league, Hockey East, we had seven of the top 20 teams in the nation, and the ones from Massachusetts were right at the top."

"Every year, our league is tough," BC coach Jerry York said. "When you come out of Hockey East and into the NCAA Tournament, you're ready for the teams in front of you because Hockey East prepares you so well for the tournament."

BC will play Denver University, the champion of the newly formed National Collegiate Hockey Conference, before UMass-Lowell faces Western Collegiate Hockey Association champion Minnesota State University-Mankato later in the evening. The winners of the two games will play Sunday afternoon for a spot in 2014 Frozen Four, which begins Thursday, April 10, at Wells Fargo Center in Philadelphia.

In total, 13 players from Massachusetts (nine from BC and 4 from UML) will represent these schools. Moreover, Minnesota State's roster features Johnny McInnis, a Quincy native, who played at Lawrence Academy.

Needham native Bill Arnold, along with Dorchester's Kevin Hayes, lead the Eagles along with New Jersey's Johnny Gaudreau. The trio, which legendary BC coach Jerry York, put together in early December has become the best line in the nation. Since their first game together on Dec. 6 against the University of New Hampshire, Gaudreau, Arnold and Hayes have combined for 45 goals and 64 assists.

BC won the Hockey East Regular Season Championship and their fifth consecutive Beanpot. However, the Eagles lost a best-of-three series to Notre Dame in the Hockey East Quarterfinals. Since 2000, the Eagles have won four national championships. Each time, their run in the NCAA Tournament began with a regional with in Worcester.

"We've had a lot of success there, so there's some good feelings for us heading to the DCU Center," York said. "But Brian Gionta said when he was here, 'A rink is a rink is a rink.' Whether you're playing in Worcester or Madison or on an Olympic-size rink, you still have to go play a hockey game."

"All of our seniors have been great in their time here, and I'm proud of them," Bazin said.

"Joe Pendenza has been our best two-year center this year and even looking back at my first two years. He's developed his game well. Derek is just a very opportunistic scorer. He's scored some big goals for us along the way."

Head coach Norm Bazin, a Lowell alumnus who has completely turned the program around in his three years at the helm, believes this may be the best team he's had since arriving in Lowell.

"This group just keeps getting better," Bazin said. "But we have to keep passing the different tests. That's the only way to become the best team, is to pass each test that comes before you. We passed one last weekend, winning the Hockey East Tournament. Minnesota State presents another one this weekend."

While just two of Massachusetts' 10 Division I men's programs have advanced to the 16-team NCAA Tournament, the University of Vermont, Quinnipiac University and Providence College all represent New England. All three of these teams will play in the East Regional Bridgeport, Conn.

Thirty-two young men from Massachusetts will appear in the tournament altogether.

Between BC and rival Boston University, Massachusetts has produced five of the 14 national championship teams. Moreover, BC's Hayes and Gaudreau are finalists for the 2014 Hobey Baker Memorial Award, annually given to the best player in the nation.

Gaudreau, a junior and the nation's leading scorer, is the likely winner. The last player from a program in Massachusetts to win the award was BU defenseman and current Florida Panther Matt Gilroy in 2009. BC's Mike Mottau, also currently with the Panthers, was the last Massachusetts native to win the award in 2000. The 2014 winner will be announced on April 11 from the Frozen Four. 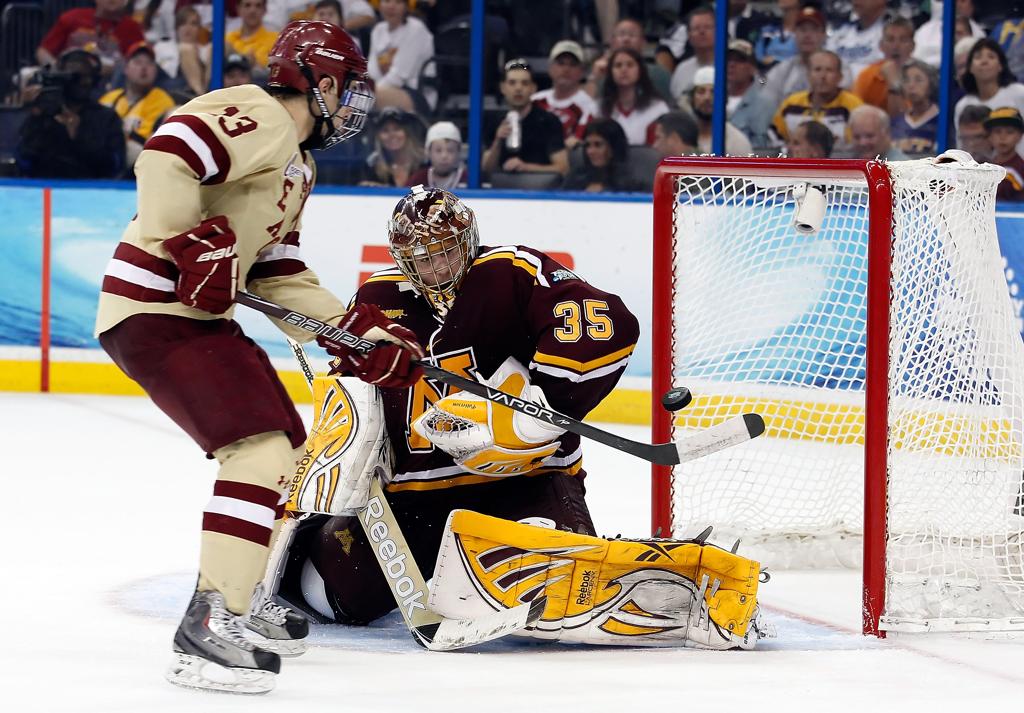