While many parents are already stocking up on back-to-school supplies and warmer fall clothes, it’s critical that to recognize summer’s heat still remains. Warm days and late sunsets have athletes of all ages out practicing and playing the games that they love. But just because your son or daughter can mostly avoid the sun’s rays by heading to the rink, it doesn’t mean you should be less concerned about the health and performance problems associated with dehydration.

“I worry about hockey players because in the summer,” says Steve Bushee, assistant athletic director in charge of sports medicine at Boston College. He notes that, many times, young athletes spend all day out in the heat before arriving at their hockey game or practice in the evening. “Anytime you’re sweating, you’re becoming dehydrated, so it’s especially important— even more so in the summer months when it can be so humid out—to be aware of the fluids you drink and the fluids you lose.”

According to Bushee, it only takes a two-percent loss in body fluid before dehydration sets in and a breakdown of muscles starts affecting performance.

Bushee says one of the simplest steps to guard against dehydration, one often utilized by the Eagles, involves weighing athletes before and after a practice or game.  By measuring the pre and post-game weight difference,, athletes can determine how much fluid loss occurred and replenish it accordingly.

“In essence, you need to regain that weight in fluid before you start working out again,” says Bushee. “If you’re down two pounds of water weight, before your next practice you need to make sure to get that back up, otherwise you’re setting yourself up for dehydration.”

Parents, players and coaches should be on the lookout for these telltale signs dehydration:

And more than just water, salt and electrolytes also need to be replaced in athletes, particularly during summer workouts.

“Sometimes in the summer, we suggest some of the guys maybe put a little extra salt on their meals, because salt is lost in sweat,” Bushee said. “That and potassium should also be watched at meals to complete a healthy diet.” When adding salt to a child’s diet, however, consider potassium a better alternative than sodium, since most children already take in too much of the latter. To get the World Health Organization’s recommended 3,150 milligrams per day, try a banana (400–500mg), a cup of trail mix with seeds and nuts (950mg), or a cup of raisins (1,000mg) as an afternoon snack.

As far as the typical rule of drinking eight glasses a day, Bushee says there is no magic number for how many glasses a person should drink, noting that weight and size play a factor, too.

So before heading outside of in to the rink this summer make sure your youth hockey player knows the key steps to staying hydrated. And then don’t forget to have them apply these lesson throughout the winter season, too. 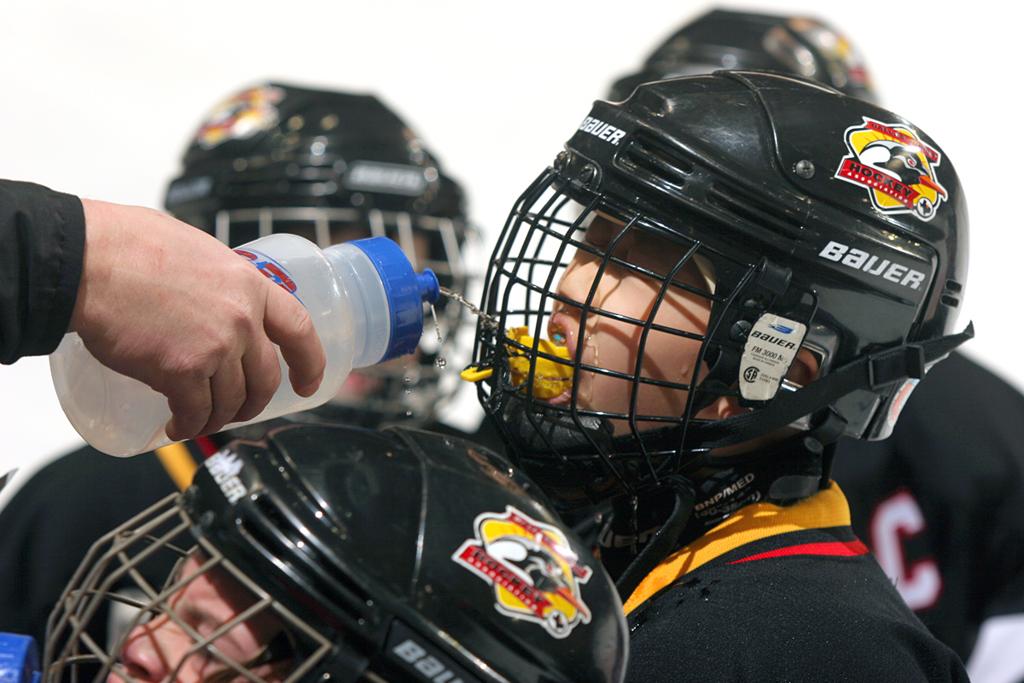