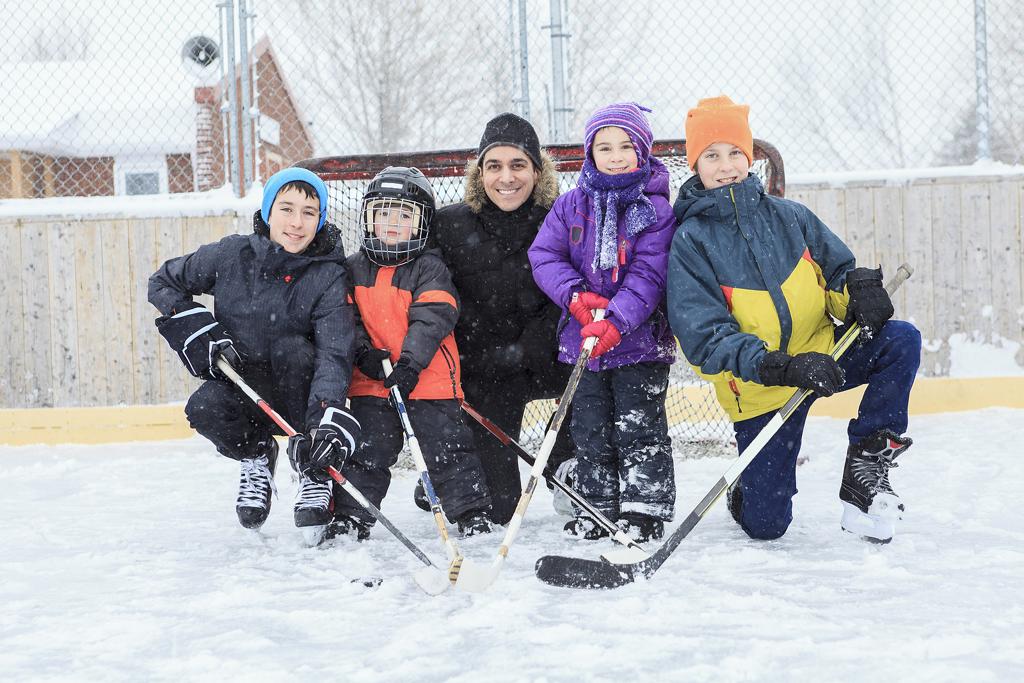 Time. That’s one of the great commodities longtime Babson head coach Jamie Rice sees as an advantage of life as a hockey parent.

In addition to his time as a hockey parent and youth hockey coach, Rice has been on a college hockey team or coaching one since 1986. He played at Babson in the 1980s, followed by coaching stints at Colby, Dartmouth, Brown, Dartmouth again, and at Northeastern before taking over as head coach at his alma mater in 2004.

Rice recalls fond memories of watching his kids play, and the little things that bring hockey parents together.

Sure, there are some drawbacks, too. You’ll see below how long it has been since plywood covered a basement window broken during driveway hockey at his house (hint: more than a decade). But there is that precious time that comes along with it.

And, of course, there are a few common threads.

Like, you might be a hockey parent if … many parts of your house — garage doors, hallways, basement walls, any walls — bear the markings of sticks or pucks or balls or one kid checking another into an otherwise fixed object.

“If your answer to fixing anything in the house is that ‘I'll fix it someday,’ or ‘I'll get to it,’ you're probably a hockey parent,” said Rice, who grew up in Newton. “Let it go, let it be, I'll get to it. We had a broken window in our basement, which faces our driveway, that has been broken for probably 12 or 13 years now from a street hockey game. We put a piece of plywood over it and here we are. It still keeps the snow and rain out, I guess, so I'm not really too worried about it.”

Rice is no longer in the thick of the youth hockey parent trap, but, with a 20-year-old son and twin 16-year-old daughters, he isn’t all that far removed.

“I can remember the car having marks in the back window,” he said. “The back window has these marks that ‘Won't quite rub out in the Camry’ from the tape on the blades of sticks rubbing up against the window. It's not a fog or bird poop, it's tape marks you just can't quite rub out, so you roll with it.”

In addition to his time as a youth hockey coach, Rice has been on a college hockey team or coaching one since 1986. He played at Babson in the 1980s, followed by coaching stints at Colby, Dartmouth, Brown, Dartmouth again, and at Northeastern before taking over as head coach at his alma mater in 2004.

For instance, if you know how far the rinks are by name in advance of your child’s game, or if you had done the math on how many miles a weekend of hockey might take you, you might be a hockey parent …

“And also when you judge your normal travel based on how far the closest rink is in the area,” Rice said. “If you have to go to the Burlington Mall and you’re a hockey parent, you might think of how far away the Burlington Ice Palace is. If your travel to a place is based on the closest rink, that's probably the biggest giveaway for me.”

Hockey parents also have their own favorite rinks. Whether it’s the snack bar food, the locker rooms, the sight lines, the temperature, the pro shop or the memories, all of these things can make the hours just a little less daunting.

“I always get a kick out of going to the rinks with my kids that I played in,” Rice said. “When I go back to think about it, here we were in 2018 or 2020 playing in the same rink I played in back in 1976. Hayden Rink in Lexington. Playing at Totten Pond in Waltham. The Daly Rink in Newton. We were taking my kids to games at Fessenden. That's where we practiced my entire life. You’re a hockey parent when you return to the rinks that you played in — and they look and feel and smell the same. Walking into Fessenden, it's like being 8 years old as a Mite in Newton again.”

Once inside the rink, though, being a hockey parent is fraught territory.

You might be a hockey parent if … some things stress you out that probably shouldn’t — from a missed breakout pass to a bad penalty to a lazy backcheck, to a goalie parent trying to will a shutout or get a kid to cover a post.

“Everybody faces it,” Rice said. “Everybody wants to see their child succeed. You have the same angst when your child is younger and they're building with Legos — come on, finish that off, one more brick. It's really, really hard for anybody to separate wanting their child to succeed with their performance. You just kind of have to do the best you can to take it all in. And USA Hockey has written thousands of articles about just enjoying the experience, and it's right, but it doesn't mean that every single person probably hasn’t faced that same anxiety at some point. It comes from love and passion for your kids.”

Those kinds of things extend to post-game, too. Car rides? If you’ve ever had something on the tip of your tongue and spent a few miles trying to figure out the best way to deliver it, even if it’s probably nowhere near the realm of something that would make a child feel or be better in that moment, you might be a hockey parent. Especially if, after a tough game or experience, you don’t know what to say at all.

“One-hundred percent,” Rice said. “You're probably just a parent in general. You don't know how to heal the pain or make it better. You probably have a little bit of anxiety, and anxiety for your child, and you haven't quite figured out how to put it all into words so it doesn't hurt or doesn't sting.”

Conversely, even managing the success of a child can be complicated.

If you’ve ever thought it was just too many trips too often to too many rinks, you’re probably a hockey parent.

For Rice, who is in the unique spot of seeing thousands of parenting data inputs over the course of nearly 50 years in the game, evolving with it all these years, with some thought, that vantage point comes in handy when it comes to considering overload.

“I think I may have a much different perspective on this because I am ‘in the business,’” he said. “I never had a problem telling my kids, ‘We’re not doing this,’ and I was pretty resolute with that because I have a different perspective, an educated perspective, of how important it is to put the stuff away and not do it. If you're passing 100 rinks on the way to playing in something in the off-season, it might be time to shut it down for a little bit. If it's costing you a lot of money or distance, I think those are two pieces to be evaluated when you're looking at whether you really need to do something or not.”

In the offseason, hockey parents may wonder if they should be some other kinds of parents. 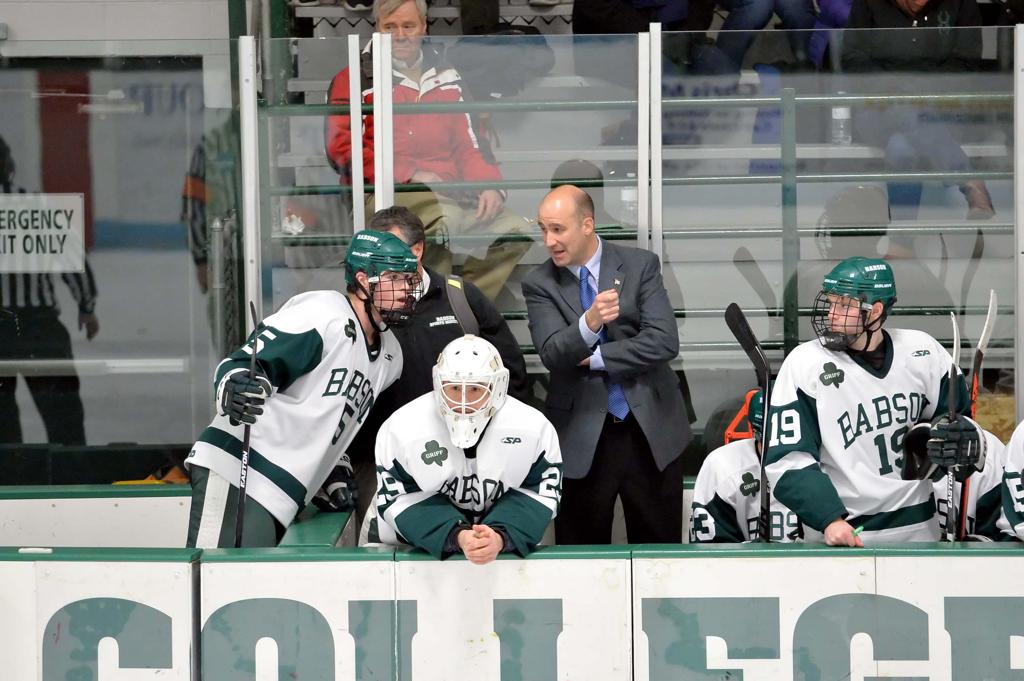 Jamie Rice played played hockey at Babson from 1986 to 1990, and has been coaching his alma mater for the past 18 seasons. in Photo Credit: Babson Athletics

“As your kids get older, you find sports that can help with hockey and give them some carryover or carry-forward,” says Rice. “There's no shortage of really successful athletes you can hear from and read about who played a lot of other sports, and they don't always have to have direct transference. I do think lacrosse is a great game for hockey. But there's nothing wrong with any sport. When you get away from the transference, just to see them enjoying something and being active and developing other skills, I think there's a great benefit.”

No longer the hockey parent of young children, there are a good many things Rice looks back on fondly. And you might be a hockey parent if you forget to stop and think about all those things that make being a hockey parent great. Rice can certainly relate.

“I was also a coaching hockey parent and I was coaching my kids’ teams, but it’s just the amount of time you have,” he said. “Hockey is so unique in that you don't just roll up to the field and open the door and it’s, ‘See you in two hours.’ When they're really little, you're packing their bag, you're helping them get dressed, helping them get undressed, then pack the bag again. Stopping at Dunkin' Donuts afterward. You don't do that every day after school. You probably don't do it driving home from your relatives‘ houses. But all those minutes just add up that you get to spend with your child alone. Being a hockey parent, you might carve out two hours of solid individual time on a day. It's not always all bad.”

At Babson, every new season comes with a new dynamic when it comes to hockey parents whose players arrive or return to campus in Wellesley.

“I think we're fortunate at Babson in that no one kind of backs into it, it's not a last choice and it’s not a player snuck in the side door,” Rice said. “We have a bunch of hockey parents who are really devoted to their children, really devoted to their education and their athletic experiences, and they support the kids. I think those parents are incredibly loving and dedicated to their children. You're doing it just because you really love them, you love to watch them play and love for them to have that experience.

And if you love watching your kid play, you might just be a hockey parent.