What College Coaches Look For in Recruits 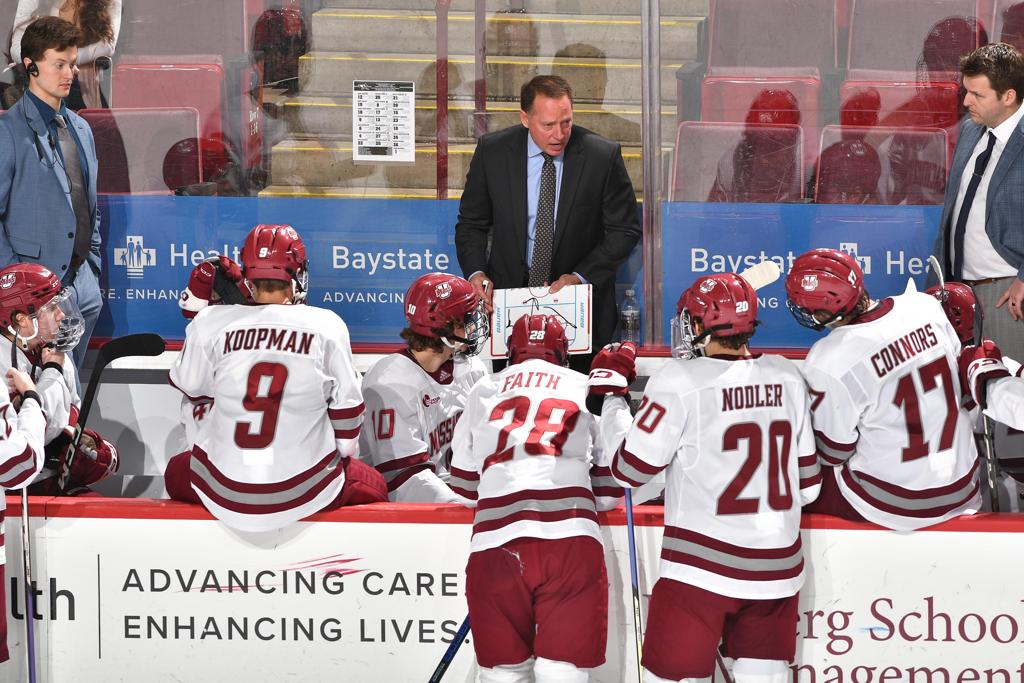 Anyone who plays for Greg Carvel knows that words such as culture, character and fit are going to be part of the equation.

Those values have produced much success over the past few years in NCAA Division I hockey — especially right here in the state of Massachusetts, in Amherst, home to the University of Massachusetts and Carvel’s Minutemen.

For as much as a high-end skill set of talent is important to the success of a DI college hockey program, Carvel insists on more.

“We care highly about kids who have qualities and values that we want in our program,” said Carvel, who played four seasons at St. Lawrence from 1989-93. “I get more excited about a player who I think is going to help our culture as opposed to how many goals he is going to score — I really do. Success in our sport is team-driven. It's not individual. So, in recruiting, we always want to know what the character of the player is. It's as important, or more important, as the skills that they bring on the ice.

Carvel came to UMass in 2016 after seven seasons as an assistant in the National Hockey League, and five seasons behind the bench at his alma mater, St. Lawrence University.

He also knows a thing or two about success, and how recruiting great players all starts with character.

Born in Postsdam, N.Y., Carvel was introduced at a young age to the uniquely hockey-mad hotbed not far from the Canadian border in northern New York State. His family held season tickets for Clarkson University’s hockey games — dating back to Jerry York’s coaching days,

Clarkson and St. Lawrence are separated by all of 10 miles and surrounded by not much else. Growing up where he did helped shape Carvel’s hockey ethos.

“I think it had a significant impact,” he said. “It’s a very remote area, yet you have two historic college hockey programs who are fierce rivals. As a little kid, I grew up a Clarkson fan. Kevin Zappia, Steve Cruickshank, all these guys I idolized. We moved to Canton when I was pretty young, then a man named Joe Marsh came to St. Lawrence and he helped to transform St. Lawrence into a national power. I feel very fortunate to grow up where I did.”

To this day, St. Lawrence remains special to him.

“The thing I loved about St. Lawrence as a student, not just a hockey player, is that no one goes to St. Lawrence just because,” Carvel said. “You go to St. Lawrence, and it's in the middle of nowhere. You’re all-in. You’re going there on purpose. And it was great. I loved being a student at St. Lawrence. And you’re surrounded by 2,000 kids who went there because they felt the same thing you did about wanting to go to a small school and to be connected with people.”

While UMass is clearly a significantly larger school, some of those small-school threads connect to its hockey program. Nearly as close to Albany, N.Y., as it is to the Massachusetts state capital, Amherst is more than 90 miles from Boston, and can feel a lifetime away from the hub.

So far, so good. To date, Carvel has coached 18 Hockey East All-Stars, five Hobey Baker finalists and two Hockey East Players of the Year. On Carvel’s watch, 14 Minutemen have been selected in the NHL Entry Draft.

“We've signed a lot of kids to NHL contracts over the last five years,” he said. “And, to me, it's because we make players better. We keep standards really high and there are no exceptions. And I think it draws in certain types of kids who don't need to be in the city. They want what we are selling.”

Perhaps the most famous player associated with Carvel and his program these days is Colorado Avalanche defenseman Cale Makar, who won the Hobey Baker Award in 2019. He has also won the Calder Memorial Trophy, the Norris Trophy, the Conn Smythe Trophy and a Stanley Cup. Even before the trophy haul of 2022, conversations turned to the possibility that Makar may wind up becoming the best defenseman (and maybe player) of his generation.

And not only did Makar, from Calgary, pick the college hockey route for his development, but, from thousands of miles away, he picked the University of Massachusetts as Carvel was arriving in Amherst.

“I came in on the back part of it,” Carvel said of recruiting Makar. “The previous coaching staff identified and recruited Cale. He played in Brooks, and the previous staff had a bit of a pipeline. So I think for Cale, it was a known entity, and the previous staff had verbally committed him. But when we came in to replace that staff, of course, Cale’s game had become pretty well-known and a lot of schools were trying to swoop in and change his commitment.”

“[Makar] stayed committed, I think, primarily because of principles,” Carvel said. “Cale was raised really well and his parents, I think, were not in a rush to throw away their commitment. They are people of their word. They gave me every opportunity to kind of re-recruit him. The combination of them wanting to stay true to their word, and having trust that they could put his development in my hands, was enough for them.”

Through early December, Makar had accumulated 205 points in 204 NHL games.

“But what a gift it was to not just our hockey program, but also to me just to work with him every day for two years,” Carvel said. “The fact that he came back for a second year when Colorado wanted to sign him — that was just another example of him doing what he felt in his heart was the right thing to do and not be persuaded by other people. He's just a really special person, and obviously a special hockey player.”

These are Carvel’s people. Makar is a model recruit — and not just because of his skills.

“It's the humility,” Carvel said. “It's a tremendous level of humility and respect he has for people. It's a really different level. And when you see him win awards, you can just see the humility. And he was like that with us. He never wanted to be singled out. He wanted to be one of the team. And that was refreshing. There's absolutely zero entitlement in his life. Zero. He never asked for anything that he didn't deserve. The humility part is really impressive.”

In addition to players that rack up points, Carvel knows there are other roles on the team that need to be filled.

Over the past few years, some things have changed for Carvel and UMass. Success has led to likely being in the conversation for more recruits than perhaps in previous years — though UMass certainly has had player success in the NHL, including current NHL players Jonathan Quick, Conor Sheary and Frank Vatrano — and the Minutemen program aims to keep building.

“It has definitely changed,” said Carvel, who points out the significance of advisors in the recruiting process, too. “We are viewed as a good developmental program, and, so, if you want your player to play in the NHL, you want to make sure he is being developed. We speak to levels of players that when I first got to UMass we never would had access to. But we've had to earn that over a five-year period.”

Carvel keeps his eye out for all kinds of things that players with visions of DI hockey dancing in their heads would do well to keep in mind.

“I think that it's important for them to know that almost everything they do is known about,” he said. “We follow your social media. We talk to everyone we know. And if there are any red flags, it's not going to be in your best interest.”

Body language can go a long way in making or breaking a recruit. 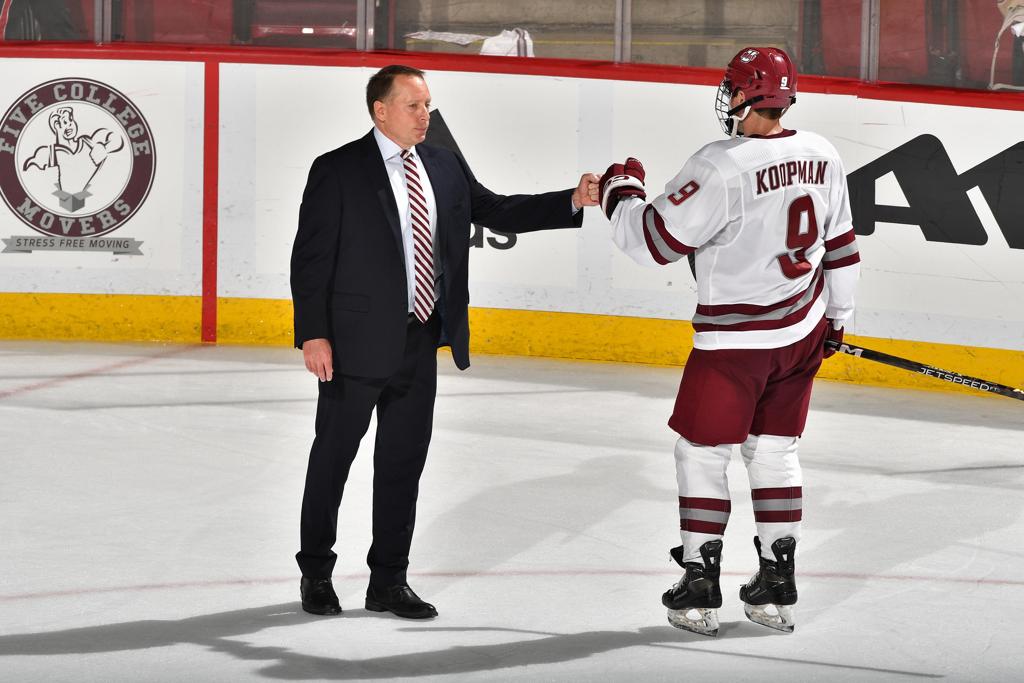 Carvel, whose Minutemen swept the defending national champions and then No. 1 ranked Denver Pioneers to open the season, fully appreciates his position in helping student-athletes succeed on and off the ice, too. Recruiting players eventually becomes something even more lasting.

“I love trying to help them realize their full potential,” Carvel said. “I feel strongly that they come here highly focused on becoming better hockey players and moving on to play pro hockey. What I want to help them realize is that, if you want that to happen, you need to find excellence in every part of your life. There's nothing better than the feeling of knowing that you’re reaching your full potential or surpassing what you thought you were capable of. That's a powerful feeling. That really propels. I say purpose propels, and that's what we're here for, to propel them into real life — whether that's hockey or life.”

And that won’t always come easy during their time at UMass.

“There are no easy streets here,” Carvel said. “We demand the most in every part of their life. Because it's worth it.”

It may be worth it in unexpected ways, too. Unlike the old real estate adage, location is perhaps not the most important part of where the hockey path might take a young and gifted player.

"They should also know that the path is different for everybody," said Carvel, who, as we learned, grew up in a green and gold house before going to St. Lawrence in a move that very likely helped foster the success of one of college hockey's most successful coaches of the past half-decade. "Some kids are going to know where they're going at 16. Some aren’t going to know until they're 21."

If that pays off in a national title, great. At UMass, the results can do a good bit of the talking to recruits.

"I would suggest that you kind of flush ideas you have about certain programs and be open," Carvel said. “Ultimately, you want to go where opportunity exists for you. You may have grown up your whole life wanting to go to a certain school. I think it's important to go where you are really wanted. You'll know which schools are really genuine. And, when you find the one that's genuine and has done a good job recruiting you, I think you know in your gut."