Worth a Shot: Shooting Tips to Score More Goals 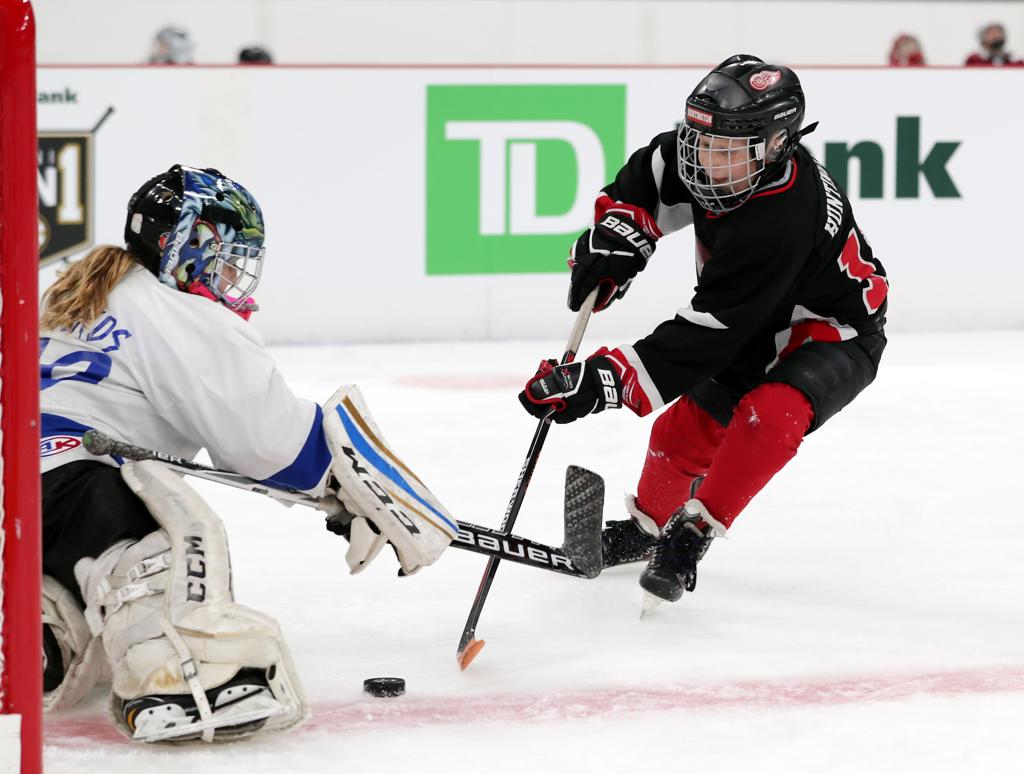 Charlie Coyle knows how good he has it.

The Boston Bruins forward is now in his fifth season playing for his home-state team. He got married this past offseason, and is currently living out his dream with his wife and two very Instagram-friendly dogs.

In order to keep the dream of getting through more than 700 NHL games going, Coyle, a Weymouth native who brings a whole lot of skill for 6-foot-3 and 223 pounds, is putting in the work to stay in the best league in the world. And, for him, that means a focus on shooting the puck.

“You go home every summer and you want to work on pretty much everything.” Coyle said. “You want to be a better player in all aspects and work on that. One of the big things for me was shooting the puck more – having the confidence to shoot it, to use my shot. I work on it all the time, so I might as well put it to use.”

Yes, like a lot of successful hockey players, one of Coyle’s most important shooting tips is remembering to actually shoot the puck.

“When I’m playing my best game, I’m hanging onto the puck and I’m bouncing off of guys and I’m winning one-on-one battles down low and shielding the puck,” Coyle said. “There are little skills within all that stuff that I’ve worked on or taken from other guys. Those are my strengths, and you want to keep on improving those — but there are also things that you can do better. For me, that’s shooting the puck a little more and not waiting for that perfect opportunity. You look for the perfect place or the perfect time and sometimes it never comes — so, are you just never going to shoot the puck?”

Since hockey moves quickly, the puck may not always behave the way you’d like. But Coyle encourages players to take chances.

“Sometimes, I feel like I wait until I have the perfect shot or the perfect angle or the perfect setup with my feet,” Coyle said. “The game is too fast. A lot of times, if you shoot quickly, you’re going to surprise the goalie and it might squeak through. So those are some things that I’ve tried to work on.”

Early in the 2022-23 season, that approach has been paying off. Through 14 games, Coyle had scored five goals for the 12-2-0 Bruins – with four of those coming in consecutive games during an impressive streak snapped on Nov. 5. And for his first goal of the year, that certainly felt like his mindset paying off, too.

In a game against the Coyotes in the home opener on Oct. 15, it was less about perfection and more about catch and shoot.

“I got a pass and came down the wing, and I didn’t know if I should cut in and try to deke the goalie because there was a defenseman coming toward me, so I kind of held it out so he couldn’t get a stick on it … and I just shot it,” Coyle said. “And when I shot it, I think the puck kind of rolled. Sometimes, when you feel it rolling, you kind of want to settle it and have it perfect. But I was coming in with too much speed to do anything else and I just kind of let it rip.”

The result? It beat Karel Vejmelka to the short side in a hurry. In that split second, a player has to settle the puck in mid-motion. The just-shoot-it mentality paid off. Taking that split second to aim the shot a little more might have meant delaying the release by the same split second that surprises a goaltender.

But there’s a catch.

Shooting without purpose isn’t going to help individuals or teams. Reading the play and having an understanding of the game are just as important as firing pucks at the net. Shooting to score, shooting for a rebound, shooting as a pass — those are all tactical choices from a shooter.

“In the same [Coyotes] game, I was coming down, and I was at a worse angle but with a guy driving to the net, so I kind of purposely put it off the goalie pads and it created a great rebound,” Coyle remembers. “So, there are little things like that — just seeing what situation you’re in and knowing the percentages. I’m not just going to get a puck and shoot it at his chest to have him cover it. Yeah, you get a faceoff down there, but let’s play some hockey and try to create something.”

"A lot of the time, the opportunity to shoot the puck can be the best option.”

Ah, creating. Almost as infrequently as a perfect shooting opportunity comes along in hockey, that’s about the same for a goal that is scored as a totally unassisted solo effort. Still, when you’re a high-end player, there can be a temptation to make a little too much happen with the puck, opting to keep dangling when a shot — or a pass — might be in order.

“I like hanging onto the puck, and I like protecting it, but you can overdo it sometimes,” Coyle said. “I think it’s just in my nature that I’m a pass-first guy, setting up teammates. But, a lot of the time, the opportunity to shoot the puck can be the best option.”

Having an understanding of the game, too, makes for a shooting tip in a way. Scoring goals often has as much to do with what’s happening away from the puck as with it.

“That’s such a huge thing,” Coyle said. “You never want to be someone who just follows the puck. Look for the open spots. Where do you think the play is going to be? Where is the puck going? Is my teammate going to shoot it around or dump it in? You can be working in certain areas, like in front of the net, and making sure you’re in good spots to receive the puck. If you can’t see your teammate with a puck, they can’t see you. So, work around the player who is in between you two.”

As so many coaches say, the puck moves faster than the players. Which is why Coyle is always looking for those opportunities. Again, it is a team game, and shooting tips cut all sorts of ways.

“I was always taught from when I was little that if there’s somebody else in a better spot than you, you give them the puck,” he said. “[In youth hockey] you can sometimes see that kid at the blue line, skating and skating and skating, waiting for the puck. There are certain situations that you just have to look for and recognize them.”

Skating is also a vital part of getting goals scored at any level.

“I wish I spent more time on it, and I wish I knew more and how to work at it when I was younger,” Coyle said. “I have been working at it my whole life, and I still do. You see the guys coming into the league now and they’re such good skaters, and such good puck-handlers.”

The idea is to be both fast and fast with the puck.

“You see certain guys who are fast, and then they get a puck and they’re not fast,” Coyle says. “And vice versa. Some guys, it seems they can go quicker with the puck. Everybody has their own skill set and you just have to know what works for you.”

Watching other players can help younger players go to school, too.

“That’s why I watch a lot of videos of other guys,” Coyle said. “[Nathan] MacKinnon comes to my head right away, just how explosive he is and how fast he can go with the puck. But even before he gets the puck, he gets his speed going when he sees an opportunity to jump in or jump through the middle to receive it. And then he’s burning by guys with ease. So he’s a guy I really like watching with how explosive he is with his strides. It’s just amazing.”

Back to the basics

Inevitably, though, even for the best in the world, hot streaks come to an end, and there are tips for when you’re not scoring, too.

“When you struggle and you start to do other things, you’re slowly getting more and more away from how you found success,” Coyle said. “Sometimes, you’re getting a lot of chances and the puck just won’t go in. There’s no puck luck, things like that, but that’s OK. It’s going to come. You can take three shots and score three goals, or take 10 shots and score no goals. If you’re not getting opportunities, then you might want to start looking at things.”

When that happens, taking a few steps back can help.

“I was always taught to go back to the basics,” Coyle said. “Play to your strengths. For me, it’s being physical, using my body, using my size, getting to the net, getting the puck to the net, bringing it to the net. It’s about going back to the principles that make you a good player, then simplifying it that way. After that, you can just get back to playing hockey. If you’re focusing solely on scoring goals, you might forget everything that leads you to that point and you can get away from those things. And then you stay in the slump.”

Overall, the scoring messages are, unfortunately, unlike the game itself. They’re fairly simple. And it’s not as easy for someone, even at the highest level, as you might think. But Coyle is willing to share his lifetime of hockey lessons

“I’m still learning and working on my game, but I’d say you have to shoot the puck,” he said. “[At the younger ages], I know you can’t check, but you can initiate contact and that’s a big thing for me. You’re not always going to be going up and down the ice without being touched. You have to play through guys, play through their hands and sticks. The more you do that, you see how much more space you can create with your body.

“Get into spots to receive the puck if you don’t have it. Take the puck to the net and stop there. Stopping and starting is a huge one to make sure you’re in the right spot. A lot of people go to the net and just kind of do the flyby. What happens if there’s a rebound? And good communication and talking a lot. That goes a long way.