Changing the Game of Skate Sharpening 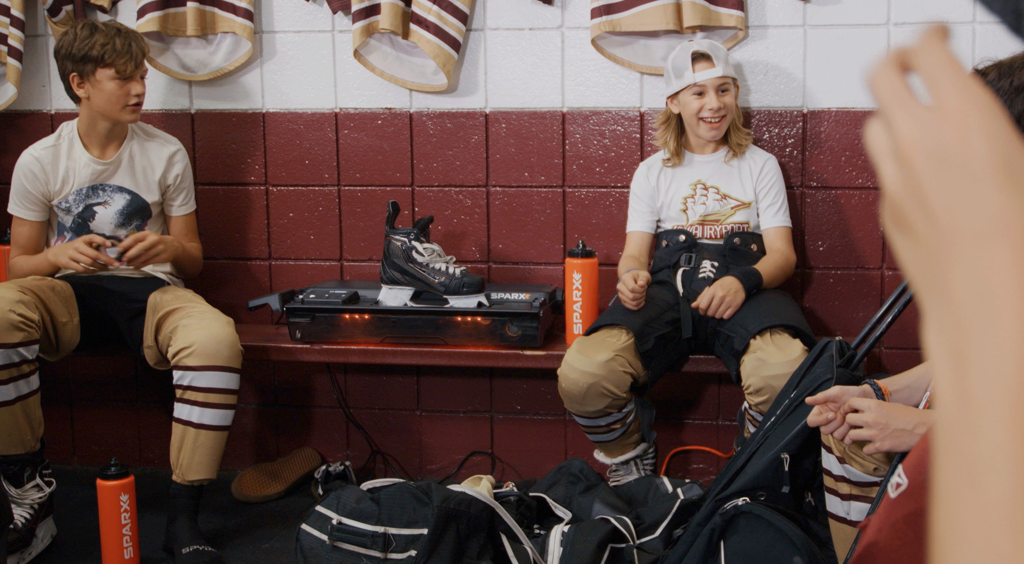 At some point, Russ Layton grew tired of the taxing process of getting his kids’ skates sharpened.

That’s how Layton and Sparx set out to change the game of skate sharpening — by allowing anyone to sharpen skates from the comfort of their own home, or wherever they want to take the Sparx Sharpener.

“I was running around getting my son’s skates sharpened and it struck me that we were still sharpening skates the same exact way my parents were getting my skates sharpened two decades earlier,” Layton said. “I knew there had to be a better way. I became obsessed with marrying the latest developments in engineering, design and manufacturing with the crude process of skate sharpening.”

In 2012, while Layton was still working at his full-time job in the medical device industry, he slowly began putting together the pieces that would become Sparx Hockey. Working alongside two other engineers out of his garage, Layton produced the first Sparx Sharpener prototype in 2014 and launched the product on Kickstarter in 2015. The first Sparx Sharpener shipped to at-home consumers in 2016 and Sparx Hockey was officially born.

A lot has changed since those early days in Layton’s garage. According to Steve Jones, Sparx Hockey’s Vice President of Marketing, more than 50,000 Sparx Sharpeners are currently in the market — thanks to a combination of factors that, once purchased, is hard to match.

“You can pull your skates right out your hockey bag, throw them in the Sparx Sharpener, put them back in the bag, throw the bag in the car and you're on your way to the game or practice,” Jones said. “It doesn’t get more convenient than that. And when you combine that convenience with the proven performance benefit of having your skates consistently sharp, the Sparx Sharpener is a must-have product for every hockey-playing family.” 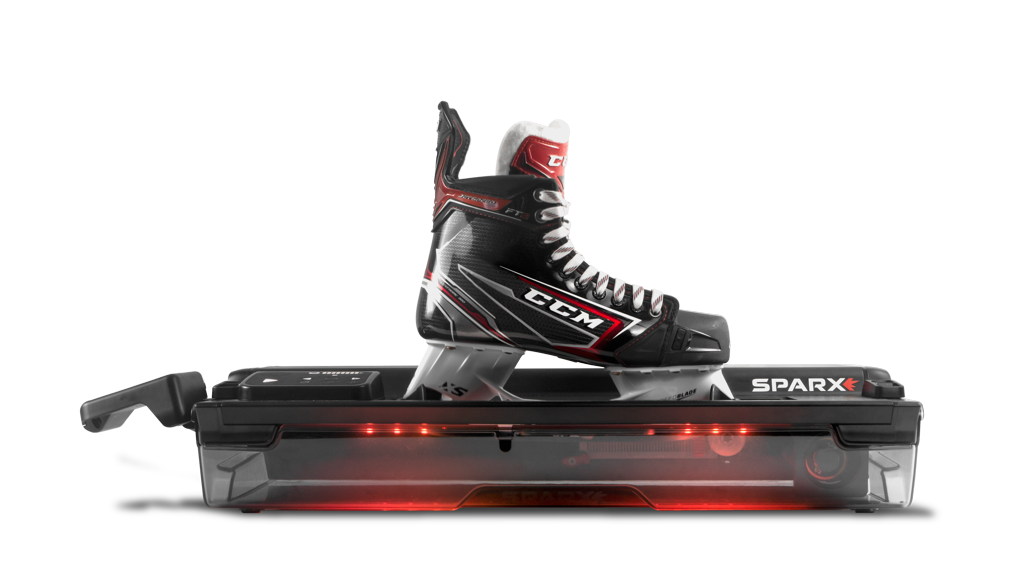 And how does it work?

Rather than with a traditional sharpener — where someone slides the skates across a spinning wheel — with Sparx, the skates are fixed in position and a grinding ring wheel applies consistent pressure as it works up and back down the blade. Three or four minutes later, a sharpened skate is ready.

“There are years of engineering in this product,” Jones said. “With traditional, hand sharpening, the wheel spins and someone brings the skate in, moves it back and forth, and there's a lot of human error in that – maybe too much pressure on the toe and not enough in the heel, or they come in faster or slower one time. With Sparx, that grinding wheel and how it’s made — again, this is years and years of engineering from a person who made medical devices — is extremely consistent and extremely accurate.”

Jones points to three critical factors in aiming for that consistent accuracy.

“It's constant pressure, constant speed and a constant removal of material,” he said. “That makes it, every single time, exactly the same sharpening. There's no human element in it. The Sparx Sharpener takes all the variables out of play and gives you a professional and accurate sharpening every single time.”

When coaches talk about a player working on his or her edges — outside edges, inside edges — the connection isn’t always understood that a blade really has two parallel tracks with a “hollow” between them. The depth or radius of that hollow can do more for a player’s skating than many realize. Sparx Hockey offers more than a dozen options that allow for more grip or more glide until a player has their setup dialed.

“In the past, most people didn’t know the differences between a half-inch, ¾” or an inch hollow – they would just go to the shop or rink and ask for a sharpening,” Jones said. “Now, players are starting to understand the impact that various hollows can have on their game. We have really educated the market by allowing the at-home consumer to choose from 16 different hollows and as a result, players are now fine-tuning their skates to their specific needs. The skate blade — and the hollow in that blade — is the one thing, literally, between you and the ice.”

For the most part, a pro shop offers a standard sharpening unless the customer really knows what they’re after. For many customers, that may work just fine. With a Sparx Sharpener, consumers can go up or down in hollow on about the same impulse as a professional hockey player with a professional equipment manager at his or her disposal. Smaller hollows give you more grip into the ice, while larger – or flatter – hollows give you that extra glide.

“If you don't have the exact grip that you need or you’re sacrificing glide, you aren't going to perform at your best,” Jones said. “So, the ability for people at home to adjust in a very easy way and try it at practice, it's a game-changer for a lot of people. Pro guys obviously understood it, but being able to bring that down to the consumer level, with moms or dads, or even the kids themselves understanding it, it's a huge advantage for their performance. It's pretty impressive to have all of those options for a 12- or 14-year-old player at home. You don't have to be an NHL player. Your mom or dad can now do the same exact sharpening that a top NHL player is getting. 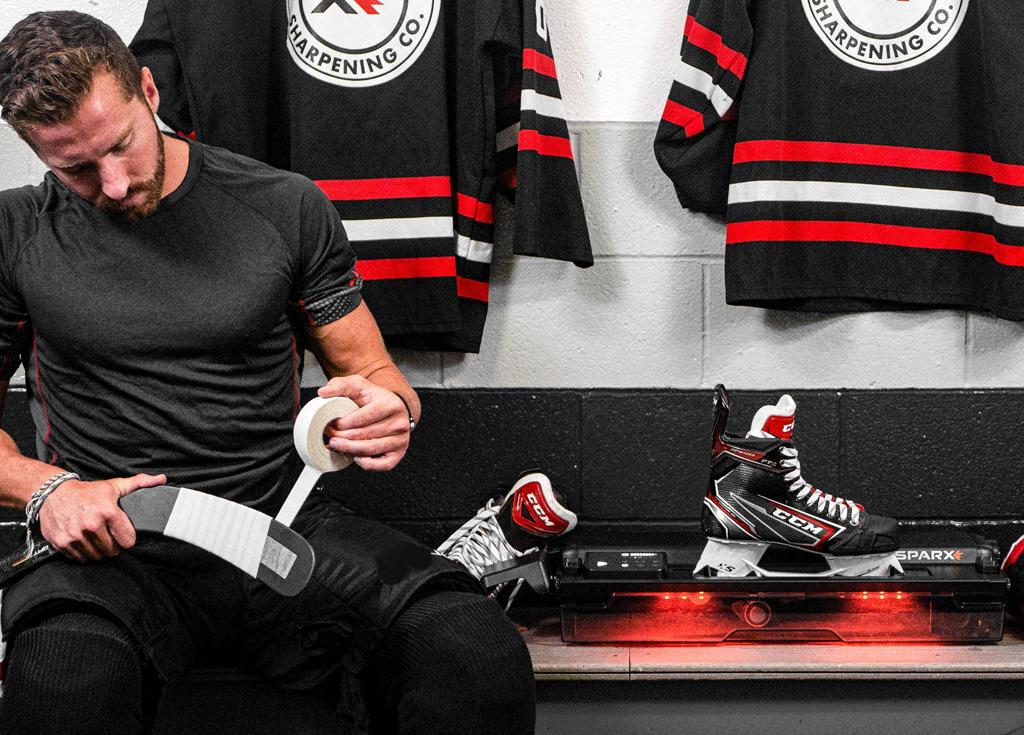 According to Jones, each Sparx Grinding Ring will sharpen about 50-60 pairs of skates on average, and with a retail price of $64.99 per ring, the price per sharpening equates to just over a dollar.

“Every single person who owns the machine, when we run into them at events or out at the rink, they come up to us and say, ‘I spent weeks analyzing the cost of Sparx versus my current cost of sharpening, but I wish I just bought it sooner,’” Jones said. “Those people also tell us that it’s the best piece of hockey equipment they have ever bought. Obviously, the price of any product is a consideration, but the convenience of having Sparx — and a professional quality sharpening any time you need it — is incredible.”

Players who have their skates profiled are also in the minds of Sparx’s creators.

“Our sharpener maintains a skate’s profile, it’s one of the main advantages of using Sparx technology over traditional hand machines,” Jones said. “When you buy your skates, many players will get their blades profiled (or shaped) and a traditional hand machine can change that profile in just a few sharpenings. Sparx will not change that profile because it produces that all-important consistent pressure, speed and removal rate.”

Speaking of pros, there are a good number who are Sparx converts, too.

“Some people look at the Sparx Sharpener and question whether or not an at-home sharpener can deliver a professional-level, quality sharpening," Jones said. "When people ask me that question, I just point them to the 25 NHL teams and more than 150 current and former NHL players that are Sparx Sharpener owners. It's not just an at-home skate sharpener — this is a professional-grade sharpener that is used in over 700 retail location, by over 1,000 teams in the world and more than 50,000 consumers. It's an at-home convenience, but it's a sophisticated, performance-driven product that definitely increases on-ice performance.”