Building Character On and Off the Ice

Olivia Soares shares how her experiences have helped shape her path to coaching, and how she was inspired to lead 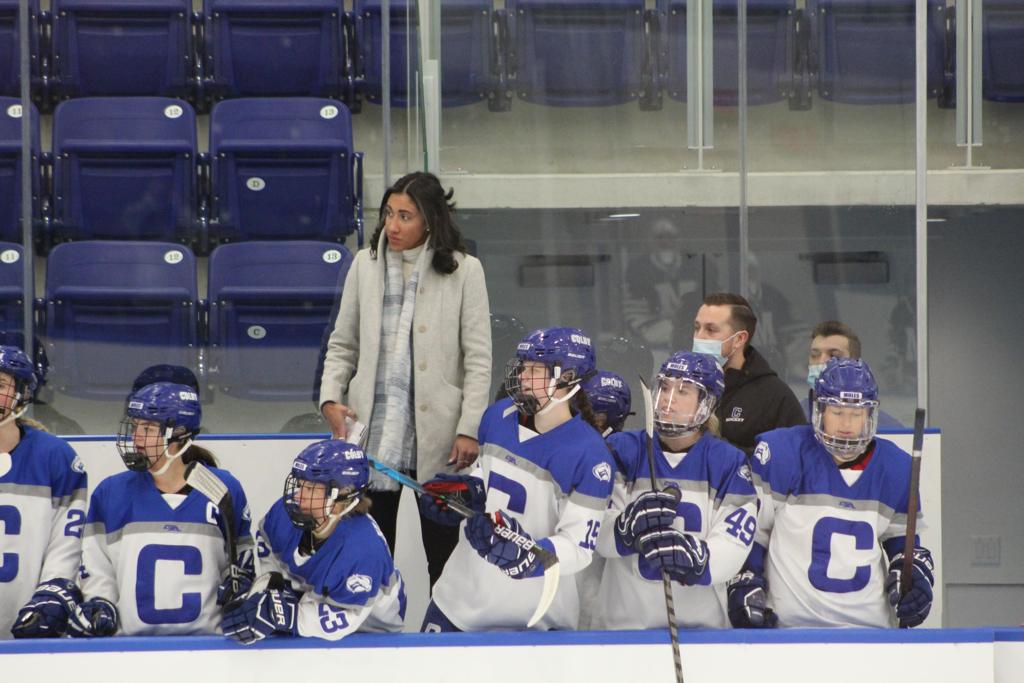 “I wanted to be just as invested in my teammates’ goals as my own.”

Take a look around, and you’ll find all sorts of examples for building character, both on and off the ice.

Olivia Soares, a Boston native who was recently named an assistant women’s hockey coach at Union College, has been keeping an eye out for those examples for the better part of nearly 25 years.

“I could give credit to so many people for some of the things I’ve learned, but we’d be here for probably an hour,” Soares said.

Throughout the years, Soares has been on a fortifying learning curve. From West Roxbury to Hanover in her youth to Rhode Island for prep school to The Ohio State University, where she was a captain and three-time Academic All-Big Ten selection — she’s met many friends, teammates and coaches that have inspired her.

Through her young coaching career at Colby College and now at Union — Soares has soaked it all in.

From a young age, she didn’t have to look far for character-building inspiration.

“I think that comes from my family — my mom and my dad,” she said. “My mom’s a nurse in Boston, my dad’s a firefighter, and my sister is currently a lawyer. I think it was their work ethic and their leadership. Growing up, my dad would always tell my sister and I to leave things better than we found them.”

As her game progressed beyond the early days (Soares didn’t start playing hockey until she was 9), including some youth hockey in Hanover, then with the Bay State Breakers and on to St. George’s School, there were probably hints along the way of the lessons in character she was learning.

“My grandparents, as well, it’s just something that they instilled in my sister and me,” Soares said. “We don’t like to complain. Our parents didn’t really like it when we complained. Find a way to do it. And do it right. Sometimes it’s not going to be the most fun, and it’s not going to be so exciting and glamorous, but the moments that you find a way to work through it, those pay off in the long run.”

When it came time to pick a college, she wound up right where she started in a way. Her sister, four years ahead, went to Ohio State, and her visits to the school had her hooked. 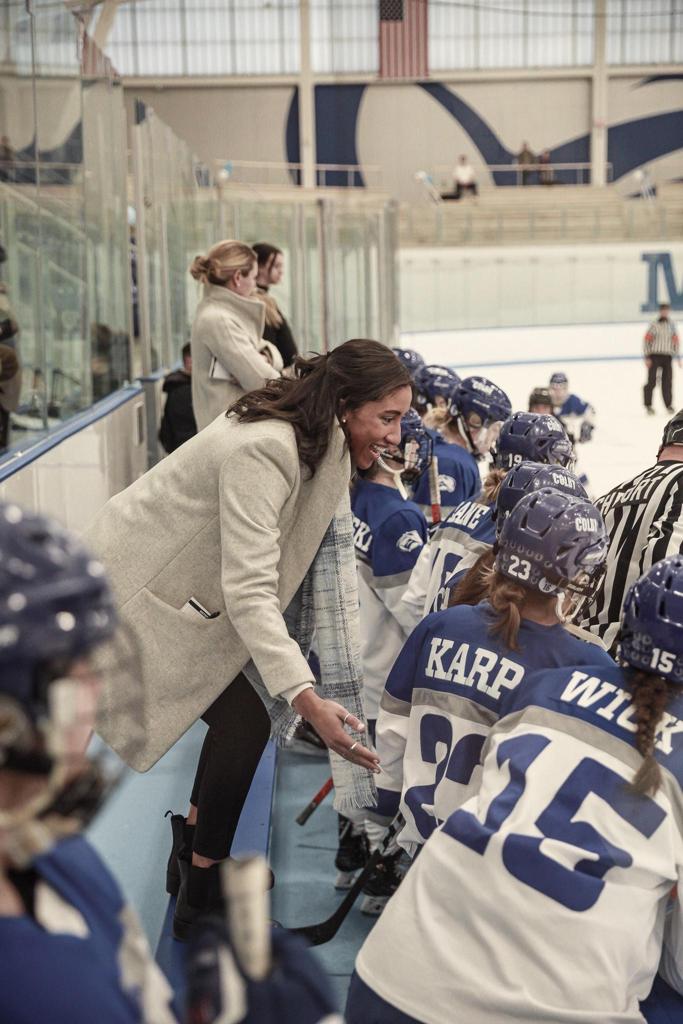 Not only did Soares earn her undergraduate degree, she also added a Masters in Sports Management, too, before starting her coaching career at Colby. While at Ohio State, there were some hints that coaching could be in her future — with the way she was thinking about people, leadership qualities and teams.

“I always kind of looked at the teammates who were great leaders, and coaches who were great leaders,” Soares said. I looked at the different characteristics that they had that I was drawn to, and the things that I wanted to emulate in my play or as a teammate — or somebody who may be a captain down the road. So I would definitely pick up on that and just try to put those things into my game. In college, I definitely focused on it more. Just finding my role in the team and being a great teammate, and I wanted to have an impact on a team somehow.”

For instance, if a teammate wasn’t getting on the scoresheet, Soares would look at what impact they were having, or how they were communicating. Picking up on character traits had become almost a way of life. Even in the hard times, there was a way for Soares to handle that with character.

“I played a little my freshman year, a decent amount,” she said. “Come my sophomore year, it all changed. And so I had to find a way to still be somebody on the team who was going to have an impact. How would I stay ready during the game? How was I still going to keep my conditioning up if I wasn't playing the same minutes? What was I going to do on the bench to show that I am present, interacting, involved and ready?”

The same love for the game that was sparked when a friend’s father sprayed up a plume of ice at a practice when she was a kid kept her coming back. That joy has a way of sustaining all kinds of hard days that eventually pay off.

“There are so many aspects of hockey that just bring you joy in different moments,” Soares said. “How competitive it is, how it's forever changing and evolving. You find different things every day. When you're younger, it's just the fun piece of it. It's hard to pinpoint one thing about why you love it and why you stay in it. But it stole my heart right away, and I think it will forever and always have my heart.”

Gratitude also helps. And for Soares, her family in Boston wasn’t all that far away from this fantastic journey, either. Before Soares left for Columbus, her mother, father and sister wrote some thoughtful notes that Soares took to school and would read before games. Her successes were a family affair, just as her teammates’ successes were so important to her.

“My mom wrote about how, ‘You always say thank you to us, but I want to say thank you to you — for the experience that hockey gave us as a family,’” Soares said. “My family all wrote me a little paragraph. I don't even think my teammates know this, but it had a little note from each of them and I read it before every game. It was in my hockey bag. I still have it somewhere.”

Wearing the ‘C’ in Columbus served as a bit of a lifetime achievement award for young Soares. In her mind, what makes a good captain?

“Time, showing that you care,” she said. “Whether it was someone's first goal or their 50th goal, I was going to be the person to celebrate it. I just tried to build relationships and invest in their experience and in their career — showing that you care and showing that you're invested in your teammates and finding what motivates them. On a bad day when they're having a hard time, what can you do to help? I think it's just finding different ways to be there for someone.”

Now as a coach, Soares sees the fruits of character-building paying off as team-building.

“It is a team sport,” Soares said. “For your success, for success as a team, you still have to put in the time even if you're not reaping an individual reward.”

Still, Soares will be recognized individually for not only her impact as a role model, but also as a groundbreaker. With her hiring at Union, she became one of only two black female coaches in Division I women’s hockey.

“To see it written that after Nina Rodgers I was only the second woman of color to coach Division I women's hockey is sort of surreal,” Soares said. “So I'm honored to be in that position. But I think, for me, I saw it and it's, like, ‘OK, now I need to continue to push forward and continue to open doors and use my platform.’ If you can see someone in the position you want to be in, it's easier to think about every day and push for it — just to make it accessible and known that it’s something that everybody can be a part of and that everybody should try.”

In her experience, which could seem on the outside like a dream path to coaching at such a young age, the road as a player hadn't always been easy.

“For my family, my mom and my dad, they always reminded me in certain situations that maybe people aren't going to be as nice or as friendly about certain things,” Soares said. “They just reminded me that I'm playing a sport I love and nobody could ever change that.”

That perspective can go a long way for anyone to consider their own progress in terms of character-building and development. Of course, this all has a lot to do in her coaching role when looking for players — and people.

“I think the players who are just willing to put in the work and understand that everything is going to be earned,” Soares said of the kinds of players who would catch her eye. “College athletics is just like that. You have to earn your spot. If someone else is working harder than you and putting in the time, maybe they're going to have that opportunity. So you have to make sure you're focused. It's forever evolving and changing, so you need to be able to be ready to work for that spot.”

And this isn’t just about hockey skills and talent or what happens on the ice.

“Oh, I think a locker room and culture is just so important,” Soares said. “I think you could have the best team in the world and all the skills. But if you don't have a great culture with it, that’s what can ruin a team. We watch more than just the game. It’s how you're interacting with your teammates, how you’re interacting with them when they’re giving you feedback. How are you after a tough game and talking to your parents?

“Every bit and piece is important. It’s not something that should be forced, because obviously there are going to be harder days, and that's understood, but it's a whole piece. It's not just a game itself. I think coaches do a really good job of doing the research behind the scenes just to see how your character is and how you are as an individual.”

Her newest hockey address is now Schenectady, N.Y.,  not far from the New York state capital in Albany, where, like she had been a part of at Ohio State, Soares is looking to be a part of something in progress.

“I think the staff here is incredible,” she said. “Josh [Sciba] and Chris [Ardito] and Megan [Main], I think they're all great. I'm so grateful for the opportunity to be a part of this. It's such an exciting time to be a part of Union women's hockey with what I think we have going and the goals for the program. And the players are excited to return and get started. I love the area and, overall, I want to be a part of building something. To be able to learn from Josh and Chris is going to be a great experience for me as well. I'm excited to get going.” 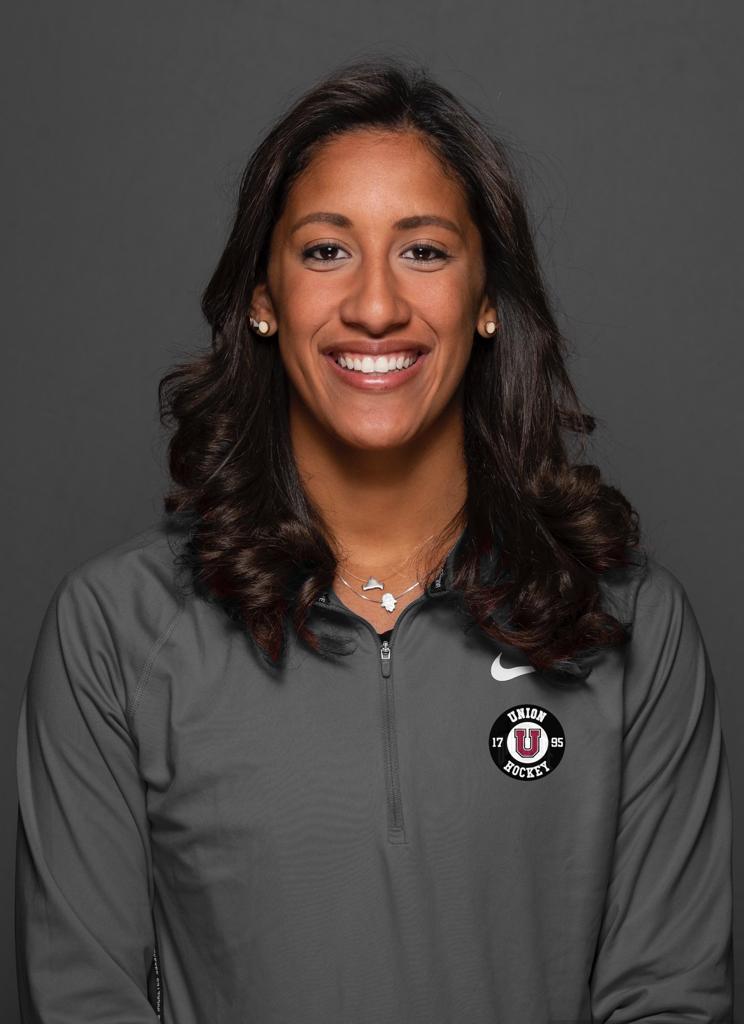