Greg Brown is Back in Town

After 14 seasons as an assistant under Jerry York, Brown is taking over as head coach of his alma mater

Over the years, Greg Brown has done his part to make sure Boston College’s hockey program is one of the best in the country.

Now, after taking over the program as its fifth head coach since 1932, the former Eagles star from Southborough enters the 2022-23 season in one of the most significant jobs in college hockey. He’s at the helm of his alma mater, where players have made more NHL debuts over the past two seasons than any other college program.

“This is such a great opportunity for me, to be at the school I'm so familiar with and so fond of, and part of a program that I have cared about for so long,” Brown said. 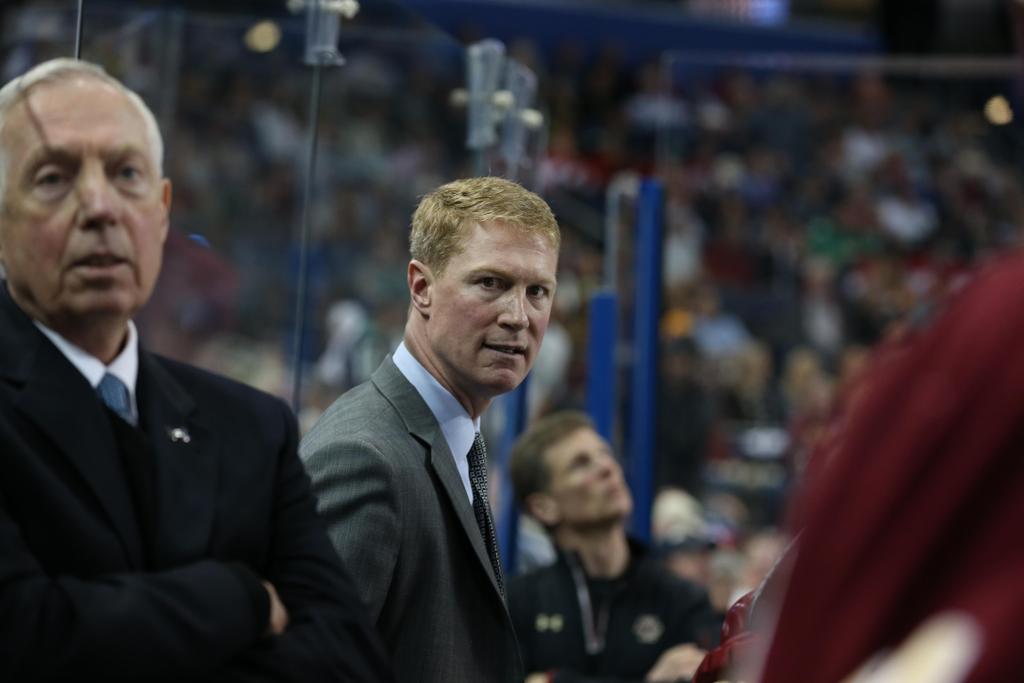 Fortunately, there’s at least one learning curve that isn’t so steep.

“I'm obviously very familiar with the building,” Brown said with a laugh. “I know the way to the school and how to get around – I had that part down. It’s been great. And, obviously, we’re only at the beginning here in the first couple weeks of getting back into it.”

We caught up with Brown in the sweltering July heat to talk about what a daunting statement that is, what he likes to see in his team, how his golf game has suffered this summer — and why he wouldn’t trade this change for the world.

Massachusetts Hockey: You’ve had an eventful summer. How has it been different from others in recent years?

Greg Brown: It has definitely been busier than any other summer. And I'm lucky because I'm not coming to an unfamiliar situation — but there have been a lot of meetings and a lot of travel. Just a constant flow of things to do. So, my golf game has suffered because of it.

MH: Would you make that trade again — allowing for the golf game to suffer to take this job?

Brown: One. Hundred. Percent. One hundred out of 100 times.

Brown: There are two things that I'm very proud to be a part of — both as a student-athlete and as an employee. I loved my time when I was here as a student, and also the 14 years that I spent working under Coach Jerry York. It was so enjoyable, and I have been so happy to be a part of it. I’m just happy and excited to be coming back around.

MH: What are some of the biggest differences between your time as a head coach in the USHL, compared to serving as an assistant at your alma mater?

Brown: From my year in Dubuque, I thought the biggest difference was that you're painting with much broader strokes. You're covering the whole thing, where, as an assistant, you have your specific roles. At BC [previously], I might be working with one of the special teams. The role is much more defined. Now, as a head coach, I think you have to have your hand in every aspect — and obviously give your assistants their jobs so they can do what they do in their specific roles. But you have to oversee much more.

MH: After spending a significant amount of time coaching under York, do you expect you’ll continue the same style of play?

Brown: Yeah, we see the game very similarly. We believe it should be played the same way. And I think that's why it was a very easy 14 years together. We were looking for the same things. There won't be drastic changes to the style of play. 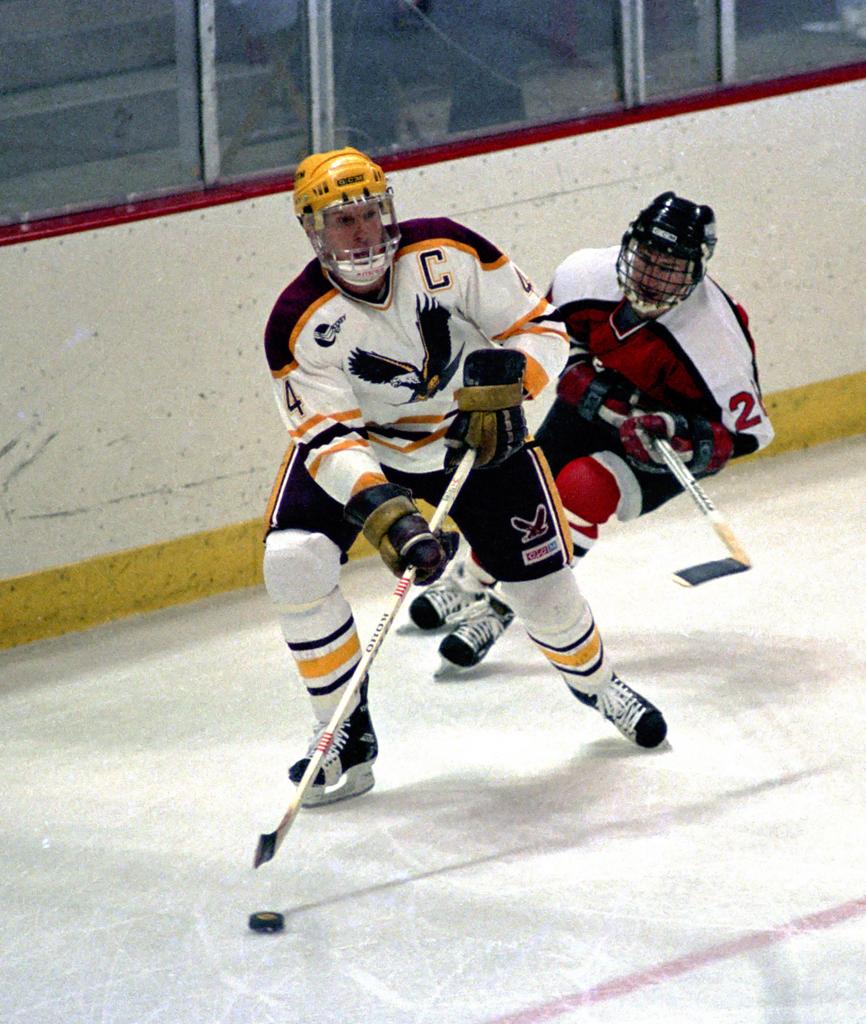 Brown: I like a lot of tempo, and hopefully a high execution rate. If we can keep the execution at a high level and increase the speed as the season goes along — and you can visibly see you're getting better in a lot of areas — then we're doing things right. If things are sloppy and not sharp, then we have to readjust and get back to a high level.

MH: How would you describe a successful locker room?

MH: Describe the kind of people or players you would like to see up and down your rosters.

Brown: Well, good people, certainly. I remember reading a book about the [rugby] All Blacks, and they say better people make better All Blacks. I think every coach will tell you that's what they want. You need a mix of styles of play on the ice. Obviously, you need your scorers and your grinders, and you want kids who put the team in front of themselves — kids who want to take on a challenge like that and kids who want to play for each other. With that, you can have a very successful program.

MH: What are some of the biggest challenges in recruiting good players?

Brown: You hope you're in the running for them! Recruiting is hard for everybody. You put your time in and you want to get to know the student athlete as well as possible — so that you're not only comfortable with what they are on the ice, but the person you're getting off the ice. You want to know about what kind of student they are, what kind of person they are. Are they a team guy? So much goes into finding the right combination of people and players to have a successful program. 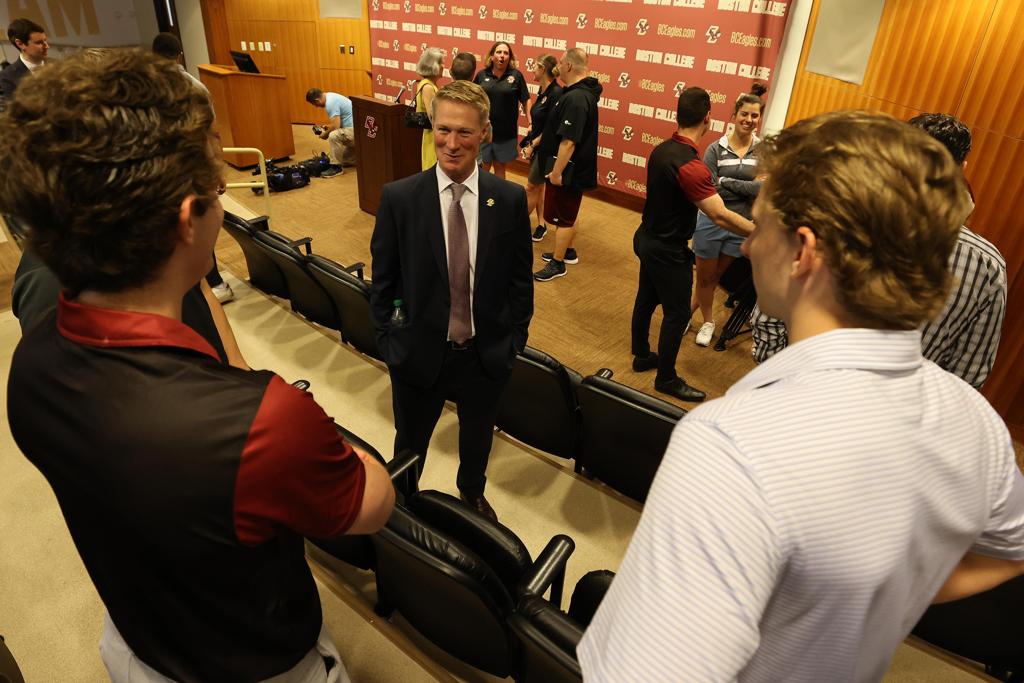 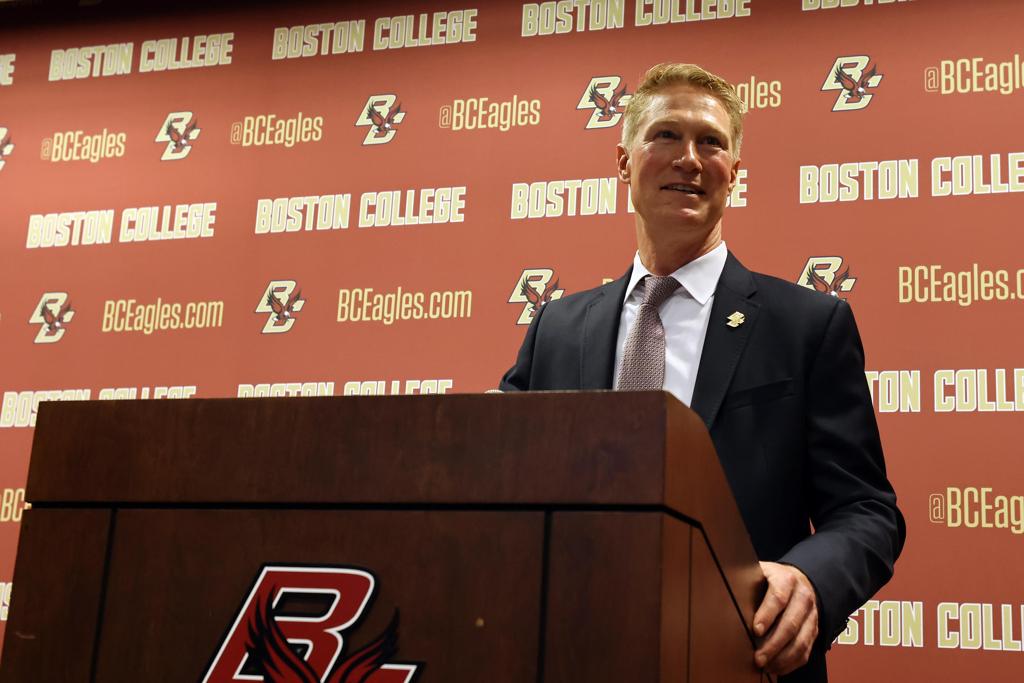 MH: There are times when players do become very successful and wind up thinking about going pro. What do you say to them in those situations?

Brown: Everyone's a little different. If they're going to leave, you want them to be ready. You want them to be ready mentally for the grind. They also have to be ready physically, because you're obviously playing against men. Every coach will tell you that if their student athlete is ready to go pro, then you're happy for them. And you wish them the best. You just don't want a kid to leave too early and have to toil for a long time in the minors before they get their chance. If that's the case, then you would hope they would stay in college and get closer to their degree until they’re ready to challenge for that spot in the NHL.

MH: One of the biggest names among this offseason’s signings is Johnny Gaudreau, who recently said he visited with Cam Atkinson's to talk about his future. What does that say about the strength of Boston College connections?

Brown: Yeah, those are obviously two of our more successful players. They both won a lot of hockey games, they’re both national champions, and it's a tight community. It doesn't surprise me at all that they're in discussions about what Johnny’s decision was.

MH: As the head coach at Boston College, I’d imagine any player in the program is just as important to you.

Brown: Absolutely. You want all of them to go on to the NHL and have great careers, but there just aren't enough spots up there. So you're excited for every kid who comes here to play for your school. You want success for all of them, and not all of it will be in the NHL. Some of it will be completely away from hockey — in business or in family life. You want to see people succeed everywhere. That's one of our goals — to have that for every person and to enjoy their time at BC and enjoy their experience on the ice and off the ice. We want them to be successful in whatever path they take.

MH: What’s your plan for starting the season off on the right foot?

Brown: Obviously, you'd like to start off hot and keep going. Really, we just want to have a great culture. That's something that's always been a part of Jerry's programs, and we want to continue with that. If you have a great culture, you have kids who are excited to get to the rink and ready to work hard. They’re excited to get better. When you have those things, then it's really enjoyable to show up every day and work with the kids.

MH: What keeps you coming back?