Meet the vision-impaired bear of a defenseman from North Reading, who’s helping pave the way for blind hockey 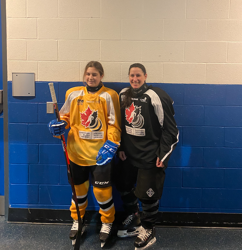 Gianna played in blind hockey tournaments against adults in St. Louis and Toronto, which included meeting the legendary Christine Callagy and a visit to the Hockey Hall of Fame.

Now 15, Gianna Griffith has played hockey more than half of her life. And yet, until this past year, she had never met a single person like herself.

Griffith, who is blind, had met a grand total of zero other blind girls who played hockey, let alone with sighted kids.

North Reading's Griffith family, which fell in love with hockey almost immediately a decade ago, would themselves love to see more Giannas in the world – so that the next steps on the path Gianna is helping pave, isn’t so unique.

In her father’s estimation, hockey is something the blind community should keep in mind for would-be young athletes.

“It's the best,” says Adam Griffith, who grew up playing baseball, but it was his kids who got him into hockey. “As a family, we love it so much.”

If there is a spectrum on which parents would choose to throw their kids into all sorts of things or to shield them, the Griffiths skewed on the side of the former.

“For us, we had the feeling that we were going to do everything,” says Griffith. “You put them into everything. There was never a fear that she was different. I think that has certainly helped. We didn't know any better. A lot of it is that a protection for your kids, because you want to protect them from having a bad experience, but I look through a different lens – that you could be shielding them from what could be an unbelievably great experience.”

For Gianna’s part, passion for the game was clear at a young age.

“It’s not as dangerous as other sports,” she says. “Because you have a lot of gear on. At the younger ages, you can’t be too physical, so you won’t get hurt as much.”

Still, Gianna is almost a role model unto herself.

How It All Begins …

Timing can be everything.

In the case of the Griffiths, Adam had always been a sports fan, and the Bruins playoff runs leading to their Stanley Cup in 2011 tuned him in to hockey. The Cup win sealed it for Adam and would lead to his kids, Gianna and Gavin, taking to the ice.

“If you were into sports at all, it was the most gripping, edge-of-your-seat thing I’ve ever seen,” Adam says of playoff hockey. “Then there was a banner in the center of town, and Gianna was 7 and Gavin was 4, and it was for a Learn to Skate at a local rink over in Peabody. I asked if they wanted to skate. And they said, ‘yeah.’”

Both kids were in the “no” phase with which so many parents are familiar, the one often followed by some consideration and a yes or a maybe, but there was something unusual about hockey.

The Griffiths went through North Reading Youth Hockey, up at the crack of dawn headed for Merrimack for 6:50 a.m. on Saturdays and 6:50 a.m. on Sundays.

“And, to their credit, which is why were still sitting here, not once did either of my kids, Gianna or her brother, ever give me a hard time about getting up,” says Adam. “It was up, and they were getting their stuff together, and it was out the door. We’d go to Dunkin’ Donuts after. Didn’t expect it to take the turns it did and become such a huge part of our family. Everybody loves it.”

Asked about her first hockey memory, Gianna gives it a moment of thought.

“Probably my first goal when I was a mite,” she says.

“No,” she says matter-of-factly.

And with good reason.

A great deal of respect comes with the territory for Gianna.

“It’s hard enough being a 15-year-old girl in general, never mind a vision-impaired one,” says Adam. “She doesn’t want help from anybody.”

For Gianna’s sake, when questions or curiosities arise, she looks at it far more matter-of-factly than anyone who might be curious or come with questions.

“They just think hockey is really hard, and wonder, ‘So, how do you know how to skate?’ and stuff like that,” she says. “I just say that I’ve been playing for a while and I’m good at it now.”

Over the years, as the levels have progressed, Gianna’s game has come along with it.

“It has really evolved,” says Adam. “It has been perfect. It started out as cross-ice. At that point when they were really young, if you miss a pass, everybody was missing passes and everybody was falling.”

Over the years, Gianna gravitated toward defense, something she credits a former coach with finding for her.

“[My coaches have been] really nice and helpful,” she says. “I really have liked all of my coaches. And one of them he put me on defense for one game and that’s now the position I play all the time.”

From Adam’s perspective, which now includes a walkie-talkie to communicate through a small speaker for Gianna during games, her work on the ice is as impressive as one proud parent might imagine.

“As you start to get older, she navigated more naturally toward the defensive side, where she’s playing the man and not the puck, necessarily,” he says. “And, of course, it has been super challenging, but she has a tenacity about her. She has been able to get by and compete. A lot of it is that her skating has been strong and she’s a good athlete overall. She was lucky enough and fortunate to have coaches who took the time. In the summertime, her and her brother, when they were younger, would go to skills at Micro Ice in North Andover. It’s just a small surface. It’s perfect for her. And they’ve been so awesome with her.”

As she grew older, Gianna went from playing co-ed to playing with girls’ teams. And very little has come easier.

“As far as her vision goes, she is completely blind in her right eye and then, in her left eye, she has glaucoma,” says Adam. “Glaucoma, for those who don’t know, is that you’re essentially seeing through a pinhole, only seeing what is directly in front of you. You have no peripheral at all. She wears the device that Motorola makes and I sit and kind of talk her through what’s kind of happening so she knows – because she’s not going to be able to see anything. So, at least it gives her a fighting chance.”

Next season, Gianna will play half a season at U16 in Stoneham, and she’s also the manager for her school’s varsity team.

Looking back to this past season, Gianna, in addition to playing for her U14 team in Stoneham, also had her first experience with blind hockey – played with a larger puck filled with ball bearings, one that is often dented (a detail responsible for the title of a blind hockey podcast called The Dented Puck).

At both tournaments, one in St. Louis and the other in Toronto, Gianna played in an open division with and against adults. For her father, who always seem to have erred on the side of having Gianna try more than less, that made for a new wrinkle.

Had he ever felt nervous about her playing?

“No,” Adam says. “With blind hockey, yeah. Blind hockey is a different animal altogether – because she’s playing with adult men. But, other than that, she’s a bear. She’s hard on her skates and super strong. There are some nervous times when they’re out there, but that’s no different than any other parent.”

The Best Thing About Hockey Is …

“I think, every year, you get to meet new people and you find new friends,” says Gianna.

The trip to Toronto wasn’t so bad, either.

“I remember that we went to the Hockey Hall of Fame, and that was fun,” Gianna says. “I liked seeing the Stanley Cup and all the rings that were on it. And we played a bunch of games there. Against all kinds of different people.”

“It was incredible,” he says. “Blind hockey is like a subculture of hockey. But the reason we went up there is that they had their first women's summit. Blind hockey has been played in Canada for decades, and they’re just farther ahead. We got up there and realized it was a big deal. It was awesome. Gianna played in the open division and was one of the only five females, and she was the only teenager.”

There were also some players from the national team mixed in in among the teams.

“By the end of it, she hung,” says Adam. “She was able to figure out the different speeds and gap appropriately. The skill level up there was insane. I was saying to her that she was taking two strides to their one. It takes time, especially as a vision-impaired player, to judge that. And it was great to meet so many people. She had never met a female who is vision-impaired and plays hockey. She never met anyone like her. Never. Not one in her 15 years on earth.”

One person they met was Christine Callagy, whose reputation precedes itself.

“She's like blind hockey royalty,” Adam says. “She's the first of many things and it was awesome for Gianna to meet her. Now she knows someone who has been successful. It was great to meet her.”

In all though, tournaments aside, Adam is a proud father.

“It's been a lot of fun just being her dad,” Adam says. “It's the fact that she's able to go out and compete. It's the respect that she gets. The hockey community is, in my opinion, unlike most communities. It's just different. She is embraced and she has been embraced by so many different people out of respect. They know how hard the game is. I think that's the biggest thing as her parents that she has just been embraced so much. She is just respected, and that's huge. Because a lot of them are her classmates and peers. It has been tremendous. It really has.”

“People need to know blind hockey is an option,” says Adam. “The vision-impaired community, there are a ton, and it's just a matter of reaching them – because parents don't think that playing hockey is an option. But it really is. Unfortunately, by the time they realize that, it's not easy. It's tough to teach vision-impaired kids to skate later in life, just like anyone. It’s hard for me; I can’t do that. Even to learn that as a sighted individual. So they need to know that it is an option at the younger ages.”

Adam also understands change of this scale can be slow.

“Rome wasn't built in a day,” he says. “The challenge is getting the word out there. Getting the word out there really needs to start at the really young levels. It's going to take bigger organizations – maybe [NHL] individual teams – to reach parents, in particular, to let them know that blind hockey is available to them. Most people I talk to in the blind hockey community are flabbergasted Boston doesn't have a team. It's just trying to reach the right people to get the word out there. It can be done but it's just going to take some time. I think getting Gianna’s story out a little bit is super important. We put her in as much as we possibly could and this is the one that stuck. We want people to know that it's definitely a viable option for them.”