Behind the scenes with Spaulding Boston Shamrocks sled hockey

Fresh off a Northeast Sled Hockey League championship, the Spaulding Boston Shamrocks are on a mission to grow the game. 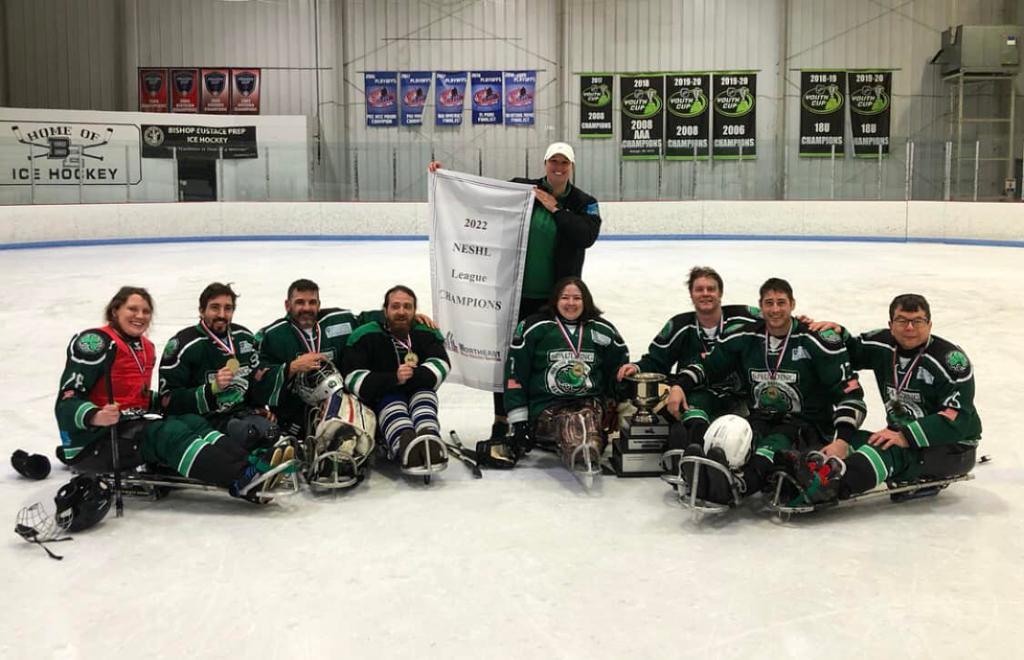 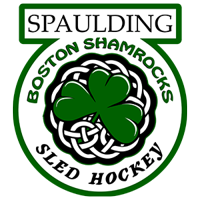 Congratulations are in order.

Thanks to a spotless record at the Northeast Sled Hockey League championships a few weeks back, the Spaulding Boston Shamrocks are title-winners.

The Spaulding Boston Shamrocks are but a part, if perhaps the most recognizable part, of the Dr. Bernard R. and Edna M. Sears Adaptive Hockey program at Spaulding Adaptive Sports Centers, which began in 2015.

In addition to the NESHL championship team, there is also a youth sled hockey team, the Spaulding Sledgehogs, and a recreational community program, too.

Since 2019, Elizabeth Dahlen, CTRS (Certified Therapeutic Recreational Therapist), has served as hockey program manager, while also taking on coaching duties, along with two other coaches, Mark Priest and Brendan Cormier.

For Dahlen, who admits that recruiting athletes is both a goal and a challenge and passes along that anyone interested in trying sled hockey or getting involved can email the program at spauldingsledhockey@partners.org (or check their website at https://sasc.spauldingrehab.org/default.aspx), the whole operation is a labor of love.

“I love the competitiveness [of sled hockey],” says Dahlen, who travels from the Lower Cape to north of Boston to coach the Spaulding Boston Shamrocks each Sunday during the season. “I grew up as an athlete and I took so many valuable lessons from playing a sport growing up. To have this as an option for people, it’s amazing. People think sled hockey – and they don’t know it, but it is a full-contact, full-out sport. It is one of the most fun sports to watch, in my opinion, and one of the most fun sports to play. And I just love that we have that option to offer competitive sport in our area.”

How it all began …

“The adaptive hockey program is dedicated to the growth of adaptive hockey in the Boston metro area and eastern Massachusetts,” Dahlen says of a collaborative partnership that includes the Spaulding, the Boston Shamrocks, Mass Hockey, the NESHL and the DCR Universal Access Program creating the Massachusetts Adaptive Hockey Initiative. “Basically, it’s a vehicle to bring the whole spectrum of adaptive Hockey, recreational through competitive, to eastern Massachusetts.”

Dahlen, who has her USA Hockey Coaching Education Program Level 4 certification, grew up a soccer player in Pennsylvania, but caught on to sled hockey almost by chance six or seven years ago.

“I used to work for an organization down in Texas working with wounded veterans, and they had a sled hockey program there,” she says. “They were in a rebuilding year and they said, ‘Elizabeth, do you have any interest in coaching?’ I grew up playing roller hockey, never really organized hockey, but I was familiar with it. I knew how to skate and I knew how to stickhandle. So I ended up getting my Level 1 coaching certification and just kind of going up the ladder from there.”

Now, across the three programs, more than 40 players a year are enjoying sled hockey through Spaulding.

“In a non-Covid year, we have had upwards of 30+ players at community on the ice at one time,” says Dahlen. “Our competitive team ranges from 8 to 15 players and our youth program ranges from 5 to 10.”

As one might imagine, the range of players varies greatly.

“We have people who were born with a disability, and we have people who have acquired their disability over different times of their life,” Dahlen says. “So it really brings an interesting group that takes one common love of sled hockey and brings them all together.”

“I would say the thing that we’re doing well is that we have a very wide range of programming to meet the needs of any individual who walks through our doors,” says Dahlen. “If it’s a first-timer who has never heard of sled hockey, we have a program for them. Or if someone comes through the door and says, ‘I recently moved to the area and I’ve played sled hockey in the past,’ we have those competitive options for them, too.”

All in all, Dahlen figures that during her time in sled hockey, she has met only a handful of players who grew up playing hockey.

“A lot of our players, they may find it after their injury or after their diagnosis,” she says. “But the biggest thing I have found is that you give someone the opportunity, like, ‘Come out and try sled hockey.’ So many people wonder what it is, then they come out on the ice and they’re immediately hooked from the time the blades hit the ice.”

The best thing about this program ...

“I would say the best part is the sled hockey community,” says Dahlen. “It’s a small world, and we’re very lucky to have so many teams in our area. Getting to partner with those teams, getting the players together for joint practices, those not only benefit our program but the sport as a whole. Everyone who is out there just loves the sport and wants to see it grow. We’re very fortunate to be able to do that with the wonderful community that is sled hockey.”

On the flip side there are challenges, of course.

“I think the most challenging thing is recruiting – getting the word out there that the sport does exist, and getting people to come out and try it,” Dahlen says. “We have a very wide pool of participants who come to the Spaulding Adaptive Sports Centers. I’ll go to people and say, ‘Hey, try sled hockey.’ And they’re always a little hesitant. I say, ‘Come out and give it a shot.’ They come out and do love it.”

“But how do we recruit to a wider population that isn’t internal?” she asks. “How do we get to college students in the Boston area who have a disability? How do we reach someone who maybe never grew up around an ice rink or is familiar with hockey, how do we reach them?”

The next big thing …

Fresh off the NESHL title, the Spaulding Boston Shamrocks will travel in to Pittsburgh for the USA Hockey’s 2022 Disabled Hockey Festival (according to USA Hockey’s website, all sled hockey games, from April 21-24, will be streamed live on HockeyTV.com).

“That will be our big culmination of the season,” says Dahlen. “From there, we take a little bit of a break and then we just hit the ground running with recruit, recruit, recruit. We do run some summer skates, but I think it’s just trying to figure out how we can continue to build off of the momentum that we have built these past few months.”

Looking back a few weeks, though, the NESHL championship run in New Jersey will not soon be forgotten.

“We were fortunate to get the No. 1 seed after winning all of our round robin games,” Dahlen says. “And we just kind of took that No. 1 seed and we ended up going 6-0 on the weekend to win our first league championship. They were so excited. I think it was just a testament to their dedication. We had to get creative when everything was still shut down and we found ice. We were even able to get some ice at outdoor rinks to run a few practices. We ran virtual coaching sessions, fitness sessions. For all those players to put in the work and stay with it, it was just the cherry on top.”

A true team effort, too.

“Every single player on our team except for the goalie was able to score a goal,” says Dahlen. “Everything just came together at the right time.”

“I think the biggest thing that I always think is just to try it because you won’t regret it,” Dahlen says. “Whether that’s for someone with a disability who is looking for a sport or if that someone is looking to volunteer or learn more. One of the really great aspects that we have is our education piece – we pair up with local college hockey teams and we have them come hop in a sled to give it a shot. We have our volunteers getting in the sleds to play, just to experience that sport because it’s really hard to describe how wonderful it is. I could talk about it until I’m blue in the face. [Once] you get in the sled, hit the ice and get that first body contact, that’s when everybody gets hooked."