When an opposing team didn't show up for a game against the Central Mass Revolution 10U team, officials had a plan 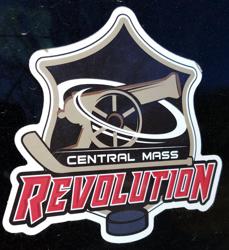 Frank Barrett may not have been reffing hockey games for long, but the former player has been around the game long enough to feel something wasn’t quite right when he skated onto the ice at the Boston Sports Institute in Wellesley on the morning of Jan. 2.

Having signed up as a referee only a few months ago for reasons that are about as pure as they come these days – as a response to learning of the referee shortage late last year – Barrett was a pretty good youth player growing up in the North Shore in the 1970s before playing four seasons at Wesleyan University, and he had a pretty good chance to give back to the game.

On Jan. 2, he and his officiating partner, 18-year-old Luca Tedesco, certainly made that happen when the Central Mass Revolution 10U’s opponent didn’t make the game.

Rather than blow the whole game dead, Barrett had an idea.

“I left the refs’ room, went out onto the ice and went through the motions as I normally would, and I was putting the nets in place when I started to get an inkling that there might only be one team,” says Barrett, who grew up playing against the likes of Bob Sweeney and Tom Barrasso and has a Hockey DB entry of his own. “I offered to the coach, ‘If you want, I can stay out and kind of supervise with coaches on the bench to get a scrimmage going.’ But not an active scrimmage with the refs intricately involved.”

The encouraging irony here, beyond an official with a handful of months under his belt making such a good call, is that the official’s first instinct was to create a game with so few rules.

“I set up sort of a pond hockey situation,” Barrett says. “Kind of shortened the rink a little bit for the kids, set out-of-bounds places, and we retrieved the pucks. That’s the only time I blew the whistle. Other than that, it was just like pond hockey – let the kids make most of the rules.”

The “we” includes Tedesco, who has his own interesting story in landing himself in pinstripes.

“If I remember correctly, I started when I was 16,” says Tedesco, a Winchester native who is in his freshman year at UMass-Lowell, where he studies journalism. “It’s actually kind of an interesting story. I’m on the autism spectrum, and, basically as part of that, I get really invested in these special interests. When I was about 13, I gained a special interest in hockey. The problem was I hadn’t learned to skate yet. So, when I was 14, I started taking skating lessons. And I wanted to play, but thought, ‘If I try to go out there and play, I’m going to get killed,’ so why not learn to become a referee? So, I studied the rulebook, learned all the signals, took the test and passed. And so now this is my third year.”

If there are better parts of a hockey world aligning a father whose kids are the same age and older than his partner, the two of whom were officiating games during New Year’s weekend because of their own willingness to take a deep appreciation for the game to officiate games, it’s hard to come up with it.

“I figured we’d try to run a practice for the kids who wanted to stay, but it was going to be tough since the coaches didn’t bring skates with us,” says Matt Gorman, one of the Revolution coaches. “I figured both refs were going to leave since there was no game to referee, but Frank was the one who approached me and said, ‘Let’s make this a fun hour for the kids.’ He offered some suggestions as to how best to run a scrimmage with about 10 kids and they took charge. I must have thanked them 10 times throughout the hour.”

All these weeks later, Gorman still appreciates the effort.

“The kids had a blast and many told me how much fun they were having,” he says. “[Barrett and Tedesco] exceeded expectations and went way above and beyond. They were engaging the kids and having fun with them. This scrimmage allowed the kids to have fun and continue to bond with their teammates.”

For the officials, though, it seemed like a no-brainer.

“It’s just something that comes naturally,” says Barrett. “You have ice. Kids love ice. Hockey is a great game. And kids drive all that way to, what, turn around and go home? So why not try to show them a good time and give them a good skate?”

While this ultimately sets up as a small, seemingly logical act of kindness, goodwill extended in so many different directions. From the refs to the coaches, from the coaches to the refs and even between the refs, separated by decades of life experience but connected for a neat moment on Jan. 2.

“First time I ever met Luca and he was a really nice kid,” Barrett says. “I said, I’m going to take the ice with the kids and you’re welcome to me – no obligation, but I'm going to stay.’ And Luca was great. He came out onto the ice with and we manufactured a scrimmage for the kids. I think it went really well.”

“I will say this, and he has already done like 60 games because of the situation with referees – too many games and not enough people – but I was shocked at how good [Barrett] was to start,” says Tedesco, who also officiates UMass-Lowell intramural games at school and has done some broadcasting of River Haws games on the student radio station. “He was communicating really well, doing a lot of really good stuff. I was very impressed.”

Officiating is often a thankless job, but there can always be the appreciation for making a difference.

“I just enjoy the ability to get out there and skate, and to help kids learn how to play the game the right way,” Tedesco says. “And to make a little money on the. I think the best part about it is that I have been able to learn more about the game, and it has helped my broadcasting as well. And I absolutely think I’m going to try to [ref] as long as I can. I’m going to try to keep this going as long as I can, until my legs eventually fail me.”

Barrett jokes his own age may be a bit advanced for a heavy reffing workload, but he, too, finds the act of giving back rewarding on its own.

“It’s something I thought I’d never do, and I literally came out because of a well-advertised shortage of referees,” he says. “I had been away from the game for a little bit and just thought it might be a good way for me to return. And if the need is true, then it’s something that I can do for the game. I couldn’t imagine when I was young not having a referee or for a big game only having one referee.”

Barrett found out just how acute the shortage was when he was assigned is first game at the midget level. And his partner for that game was also reffing for the very first time.

“It was like trial by fire, but it actually made me feel better that I had done the right thing,” says Barrett. “There truly was a shortage. And I’ve done a ton of games since then, and people in the Valley League are keeping me really busy. It has worked out great. I get to feel good because I feel like I’m providing a service for the kids. You’re there for the love of the game, but it’s also a nice little bonus when they give you a check once a month.”

Both Barrett and Tedesco suggest anyone with even a passing interest in officiating give it a whirl.

“Do it,” Tedesco says. “I always say do it. Go out and give it a shot. The good part about it is that whatever investment you put into it, that usually pays for itself. Some days it can be a grind, but you just have to keep up with it. It’s a great way to stay involved. If you’re bored on a Sunday afternoon, get out and ref. It keeps you busy, it keeps you active, it’s good exercise, and it’s good money. It’s not for everybody, but everybody should give it a shot.”