Is your player on the right development timeline?

Even for the country’s elite players, the ones who have turned heads on the ice since they were children, patience in development is a virtue.

For Millis native Matt Boldy, who played most of his youth hockey with the South Shore Kings, left for USA Hockey’s National Team Development Program (more on that absurdly talented lineup in a bit) at the age of 16, and returned to play Division I hockey back in his home state at Boston College, even making his NHL debut recently with the Minnesota Wild at the age of 20 has been a study in good timing.

In fact, his timing was so good that not only did he score his first NHL goal in that debut, but he also scored it in Boston, in front of his friends and family, against the Bruins.

At every level, Boldy has had success. Upon leaving for Ann Arbor, Mich., in what was not an easy decision, he scored 76 points in 61 games during his first season with the NTPD, and he added 81 in 64 games during his second season. At BC, he averaged more than a point per game. Along the way, while playing for Team USA in the IIHF World Junior Championship, he scored a highlight reel, between-the-legs goal among his five goals in seven games.

"I think that some people now are in too much of a rush to leave the level they’re at,” says Boldy. "To go on to the next level, you should be dominating or be the best player on the ice for the majority of the nights. So, for me, it’s just kind of knowing when you get to that point. And I think as a hockey player you have to realize that and want to be the best player every night. And I think that will help you achieve those goals a little quicker.” 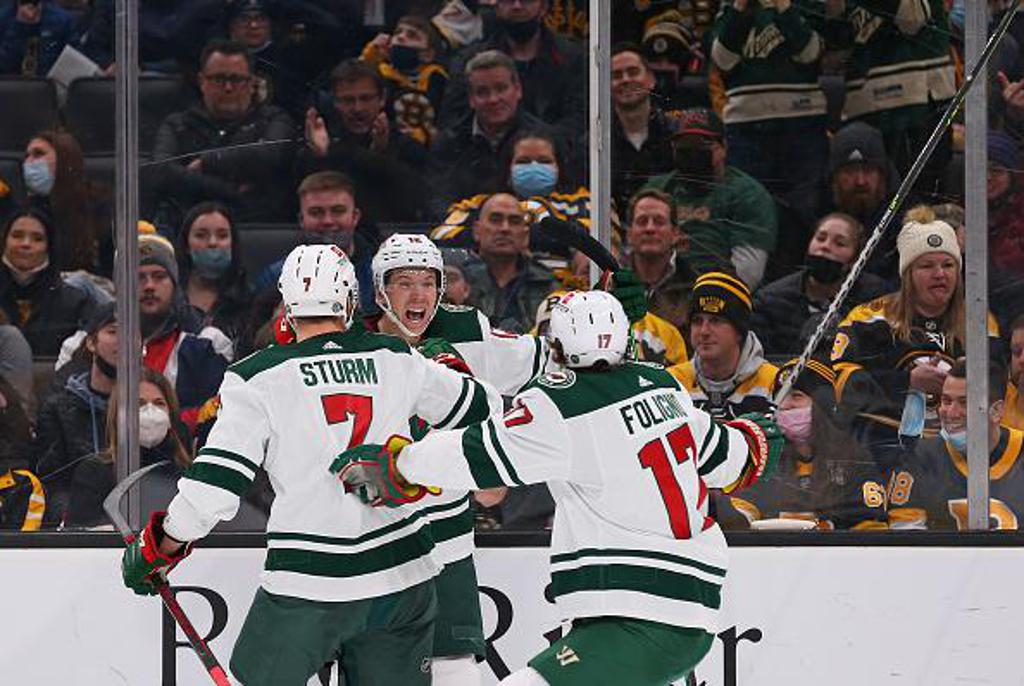 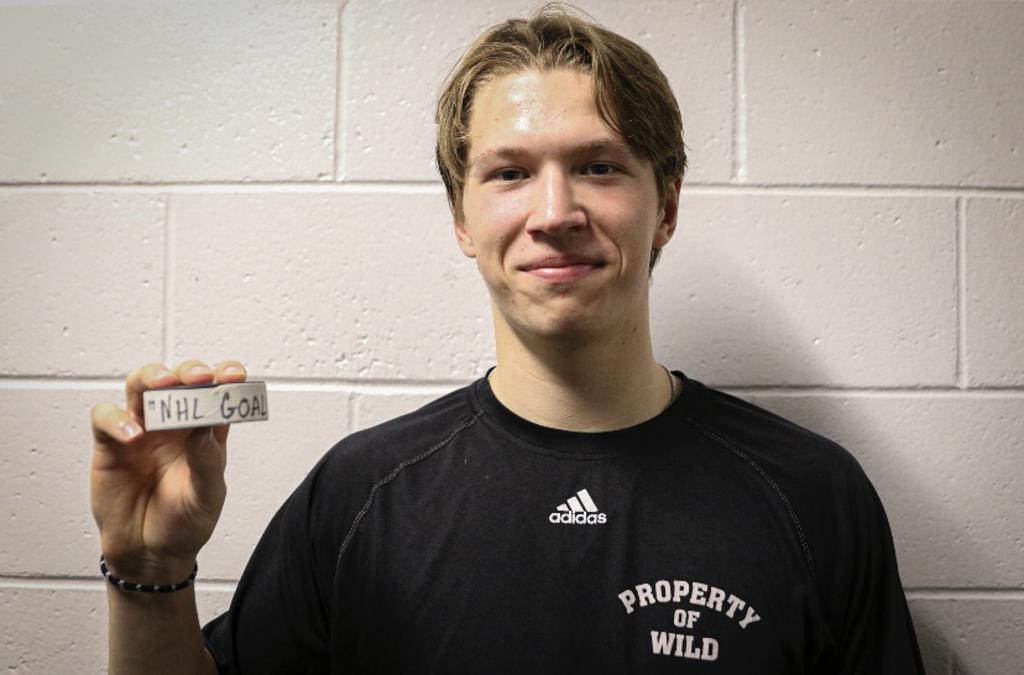 In March of 2021, Boldy signed a three-year deal with the Wild and scored 18 points in 14 games with Iowa. This season, he started out with 10 points in 10 games before his coach, Tim Army, told him in Winnipeg he’d be catching up with the big club in Boston.

"When the schedule came out this summer, that was probably the first place I looked is to see when we played them,” Boldy says. “And it obviously worked out with unbelievable timing. I’m pretty lucky to have had all my friends and family able to come to the game. It was just a believable knowing that everybody was there to support me. It couldn’t be better. It’s a dream come true and it’s like a Disney movie.”

For his first goal, Boldy took a long pass from Jonas Brodin on his backhand as he entered the Bruins’ zone on the right wing, curled toward the middle of the ice, and slid a pass over to Marcus Foligno, who passed it back as the zone opened up in front of Boldy.

“I remember a lot of it,” he says. “Coming into the zone, it was kind of an everyday 3-on-2. I tried to get to the middle of the ice, passed it to [Foligno], and they’re kind of expecting him to shoot. Once I opened up and looked back at him, the lane was wide open and it was kind of slow motion from there. And instinct kind of takes over, and I was lucky enough to kind of find the back of the net.”

There is the adage that, “They don’t ask how, they ask how many,” but it sure does feel good to make the first mark so emphatically. Nothing off the knee or by accident.

“Obviously, you want to score in your first game,” says Boldy. “It’s everybody’s dream to score that first goal. Obviously, it’s nice that I got it the way I did, for sure, rather than kind of a fluky one. But they all count the same so I definitely would’ve taken one off the back or something like; I would have had no complaints.”

“I think, for me, the biggest thing growing up was just to have fun with hockey. I think my parents did a really good job of making sure that I was having fun and that hockey wasn’t my everything. They definitely had a lot of other values over playing hockey when I was just a little kid. I wasn’t hockey 24/7. I wouldn’t touch my bag from the day our season ended until the day it started the next year. Taking my time with my development was from not focusing my whole life on hockey.”

Not surprisingly, his parents were more than a little excited in the rink that night, and the video of their celebration went viral on social media with, in addition to 170,000 NHL Instagram account views of the goal, more than 147,000 for the isolated reaction of his parents.

“It’s a really cool video,” Boldy says. “Just to have that on camera and to see their reaction. I knew that that’s what their reaction would be, but it was just awesome to really see it and have that moment for the rest of my life.”

Boldy’s parents are also largely responsible for his not feeling pressure to rush his career.

“I think, for me, the biggest thing growing up was just to have fun with hockey,” he says. “I think my parents did a really good job of making sure that I was having fun and that hockey wasn’t my everything. They definitely had a lot of other values over playing hockey when I was just a little kid. I wasn’t hockey 24/7. I wouldn’t touch my bag from the day our season ended until the day it started the next year. Taking my time with my development was from not focusing my whole life on hockey.”

But on the night of Jan. 8, 2022, hockey was about all that was on anyone’s mind who was close to Boldy. After the goal, the texts came flooding in. From family, from friends and from teammates dating back to his time in mites.

“Oh, tons,” says Boldy. “I think I probably had 300 or 400 text messages by the next day. It’s unbelievable just hearing from everybody. It’s my family, it’s the kids I grew up playing with, even playing mite hockey with that I’m still friends with to this day. Just knowing that those guys are there or watching on TV, and knowing those guys always have my back, it’s just a special moment.”

The wait was worth it.

Drafted No. 12 overall in 2019 – the same number he wore at BC, at the World Juniors and in his NHL debut – the 6-foot-2 Boldy watched as some of his NTDP teammates were making new names for themselves in The Show.

“When I went to the National Development Program, we were absolutely stacked,” Boldy says. “We had eight first-rounders. I think going there was a big jump for me, probably the biggest jump I took in terms of going from one level to the next and not being 100% sure that I was ready for it. But it obviously worked out well.”

Still, it wasn’t always a perfect feeling to wait. From the same draft, No. 1 pick Jack Hughes, No. 5 pick Alex Turcotte, No. 9 pick Trevor Zegras, No. 13 pick Spencer Knight, No. 14 pick Cam York and No. 15 pick Cole Caulfield, all NTDP teammates of Boldy’s, had made earlier debuts.

“Cole is one of my best friends and seeing him have that success, I was definitely not heartbroken that I wasn’t experiencing the same thing,” says Boldy. “So it made it easier and I was really happy for him. It’s hard not to have those thoughts, but I think I’ve taken my time throughout my development.”

“I’m still 20-years-old and just played my first NHL game,” he says. “So I’m pretty young still. I think there is, hopefully, a long career ahead of me. During that time, I wasn’t really too worried about getting there as fast as I can. It’s kind of, ‘When I get there, I want stay there. I want to make sure that that’s where I should be and where I belong.”

For the near term, that may be in Minnesota or in Iowa, as roster management isn’t easy in the times of Covid.

“It’s still kind of up in the air,” says Boldy, who has been staying in a hotel near the Wild’s home of Xcel Energy Center, taking advantage of team meals in the morning and afternoon, and eating dinners in and around Saint Paul on off nights. “I’m just kind of not worrying too much about it. I’ll take my opportunities and make the most of them right now.”