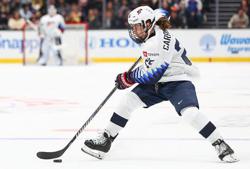 The Czech Republic … Slovakia … Sweden … Finland … Russia (“So many places in Russia”) … China (“Obviously, China”) ... “And there are definitely some more in there,” says Alex Carpenter.

That’s a sampling of countries hockey has taken Carpenter throughout her career.

On New Year’s Day, thanks to being named to the 2022 Olympic Women’s Ice Hockey team, Carpenter learned her next planned destination: Beijing. Having played four seasons in China, the Mass-born former Boston College star is no stranger to playing in the sprawling country, but this trip sets up to be more special than most.

“It’s definitely pretty special,” says Carpenter. “It’s something that a lot of young girls and boys work for, ever since they put on the skates. To be in that elite company with my teammates is pretty special. And just a testament to everyone’s hard work.”

Along with her teammates, Carpenter braved Minneapolis’ sub-zero temperatures for the live naming of Team USA during the NHL’s Winter Classic.

“I think I had seven layers of clothes on,” Carpenter jokes. “Two pairs of gloves. The mask was keeping me warm all day – then, when I took it off, my face was just burning. But it kind of reminds you of all those nights you spend in the backyard rinks and just freezing your butt off.”

The daughter of Bobby Carpenter, who himself appeared on the cover of Sports Illustrated at 17 as "The Can't-Miss Kid," finished his senior season at St. John’s Prep and went straight to the National Hockey League in 1981, then became the first U.S.-born player to score 50 goals in an NHL season, has been making a name for herself all along.

Alex Carpenter was born in Cambridge, Mass., and spent the earlier years of her life in New York and New Jersey before moving back to Massachusetts and playing with the Valley Junior Warriors and the East Coast Wizards, then at Governors Academy and Boston College. 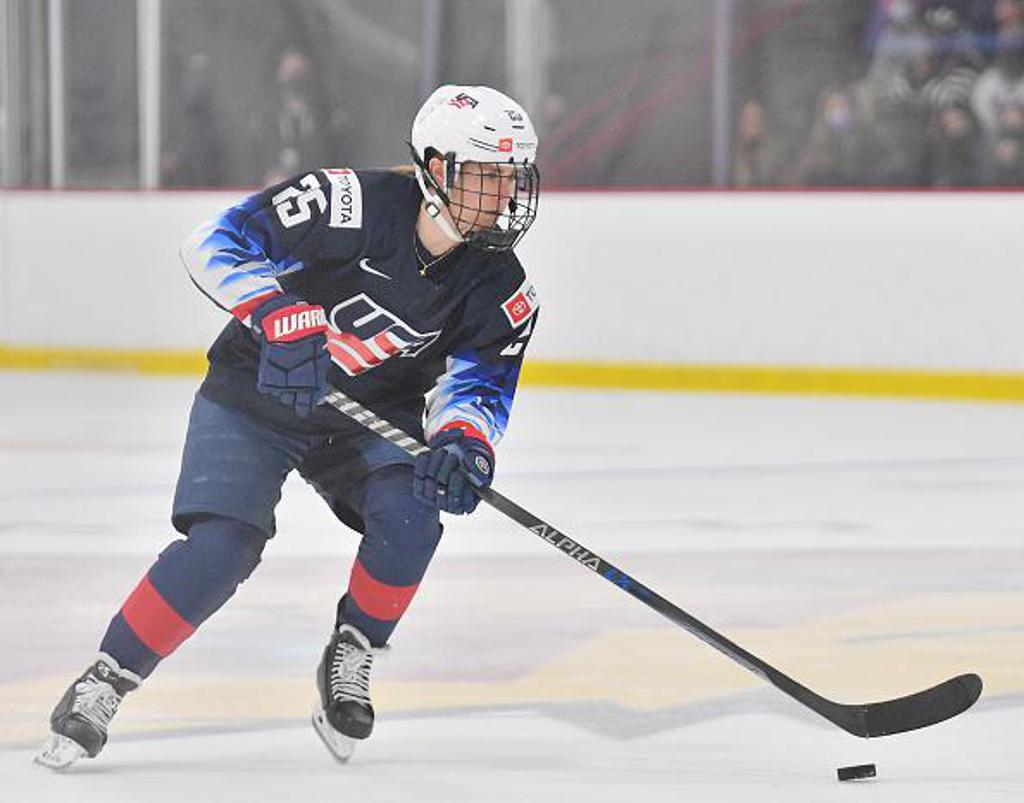 At every stop, Carpenter left her mark, appearing in three USA Hockey Youth Nationals tournaments, scoring 427 points in 100 high school games, and setting a raft of school records in a BC career that included three Patty Kazmaier nominations and one win as the nation’s top player. Her Team USA appearances, now more than 20 of them, began back in 2009 as a 15-year-old in an Under-18 series, and she has five IIHF Women’s World Championship gold medals.

Throughout all these hockey travels, Carpenter has listed her hometown as North Reading, Mass.

“I still list my hometown is North Reading, Mass.,” says Carpenter. “Even though I moved to North Andover, that’s where I say that I really grew up and played most of my hockey. I was in North Reading for about 15 years, the longest I’ve been anywhere.”

As a player, Carpenter has worked over the years to balance out her game. With the Eagles, she was +180 in her career.

“When I was younger, one of my dad’s biggest pieces of advice was to emphasize playing defense – even when you’re younger and you just want to go down and score goals,” she says. “I remember him specifically teaching my brothers and me that, if you ever want the puck so you can go play offense, you have to play defense. So, over the past years, especially in college, trying to be a strong two-way player is something that I really try to build my game around.”

This past week, her game would have taken her from the Twin Cities to Edmonton and Red Deer, Alberta, but a Covid-shortened My Why Tour landed Team USA back at its residence program headquarters in Blaine, Minn.

"Every year you can just see the culture of the team shifting into something very special. Being able to see the program grow – and the talent and the skill level of the girls coming up from the U18 team program, especially the young college players – it’s great to see how far the game has come and how far this program is going.”

When you’re averaging around six days a week on the ice, and plans are fluid and always with a chance of changing, it can be easy to lose track of the days. Ask a hockey player during a tournament or a long season what day it is and you’re more likely to get the date.

“I know it’s the fifth,” says Carpenter. “Is it Wednesday? It’s kind of difficult because we have scrimmages here and there, and it’s kind of going day by day. We’re trying to piece together practice and workout schedules during a time when we were supposed to be in Canada, and our staff has done a great job of managing the endlessly changing landscape that we have with Covid and travel.” 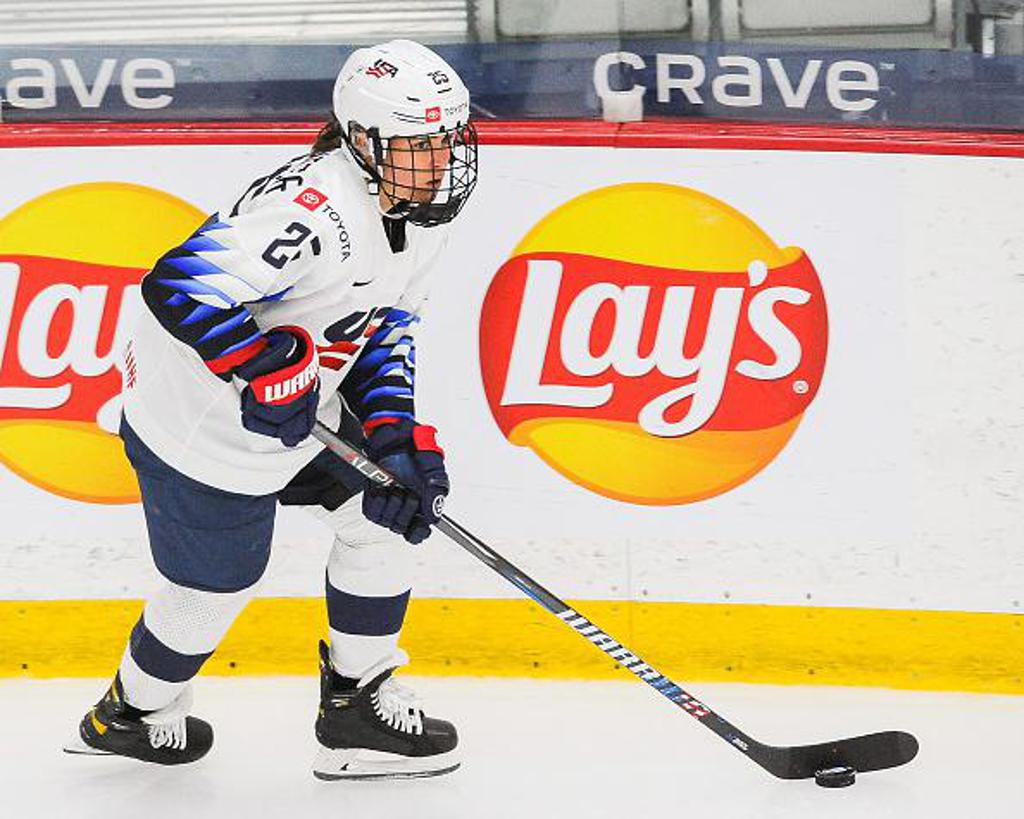 “She’s quite a riot,” Carpenter says of Kennedy. “Our coaching staff is awesome this year. They all complement each other so nicely, and we have Brian Pothier with the defense, and, of course, Joel Johnson as our head coach. The way they have run this residency program this year has been great – a real professional environment and we’ve accomplished so much in such a short period of time. And I think we’re getting so much better each day.”

From now until Team USA gets word on its next big step, which is hopefully en route to Beijing, Carpenter and her teammates will be practicing and aiming for gold. And that conversation typically brings up the topic of Team Canada.

“Yeah, it’s obviously the big talk – USA vs. Canada,” says Carpenter. “But I think this year we really have been trying to focus on ourselves and on our team – not so much on what they do. We’re focusing how we play our game and letting that hopefully bring us a gold medal.”

It would mean Carpenter’s first Olympic gold medal, and her family is understandably hopeful, too.

“The support that they gave me over the last four years, it’s definitely just as much for them as it is for me,” she says. “I know they’re super excited to get up and watch all the games that we have. They’re used to getting up from the time change with my games in China, so they should be good to go.”

Beijing is about as far away as it gets – 13 time zones from where Carpenter grew up. Team USA, though, serves up a hockey family in which she has also thrived.

“I’ve been involved in this program since the U18 level,” says Carpenter. “And every year you can just see the culture of the team shifting into something very special. Being able to see the program grow – and the talent and the skill level of the girls coming up from the U18 team program, especially the young college players – it’s great to see how far the game has come and how far this program is going.”