Fancy yourself a center? Maybe a wing? How about both?

To play a position may feel natural, but to feel a need to be a position, that’s a myth Kenny Rausch, who credits his own versatility for keeping him in talented Terriers lineups as a walk-on, would like to see change.

Rausch, who played forward and defense – and baseball – for Boston University during one of BU’s most sustained era of success in the early 1990s and has gone on to serve in hockey roles nearly every year since, from behind college benches, to USA Hockey, to his current role with RinkNet Software.

There are a handful of conversations Rausch probably wishes he didn’t have to have after all these years.

One is a double-whammy of a myth that without playing on a big sheet not only will a player not learn they game, but they won’t learn to skate, either. While it’s largely true that 8U hockey doesn’t look like hockey, that’s both OK and probably not the point.

“Of course it’s not real hockey,” Rausch says. “They’re 8-years-old. The farthest thing from real hockey is 8-year-old hockey on a full sheet. But at least playing cross-ice at 8, you will see small passes and plays in tight areas. You’ll see things that resemble real hockey.”

An adult might also remember that a kid wouldn’t be traveling the same 200-feet on a full sheet, either. The myth worth busting is that a full sheet is the only way to teach a kid to skate.

“With the skating piece, that you’re not going to learn how to skate, 8-year-olds don’t need to learn how to skate 200 feet,” says Rausch. “An adult takes about 17 strides to go from goal line to goal line. An 8-year-old takes about 16 strides to go board to board. [At top speed in the NHL] almost none of it is straight-line skating. So, you don’t actually skate 200 feet in a game anyway. Young players are going to learn more agility in the small areas, so it’s actually better for the game than going 200 feet up the ice.”

And at that NHL level, players are so often playing small-area games within a game anyway.

“The best players in the world have to make plays in a 10-foot-square box,” Rausch says. “I have a picture from during the playoffs last year where, with a goalie pulled, all 12 players are in 1/6th of the ice. But mom and dad sometimes will say with their 6- or 8-year-old that there isn’t enough room out there. Are you kidding me? And if we think that we’re going to make it easier on our kids because by giving them more space, we’re doing a disservice to their development.”

Hockey at that particular age, though, can be rife with myths and misconceptions. 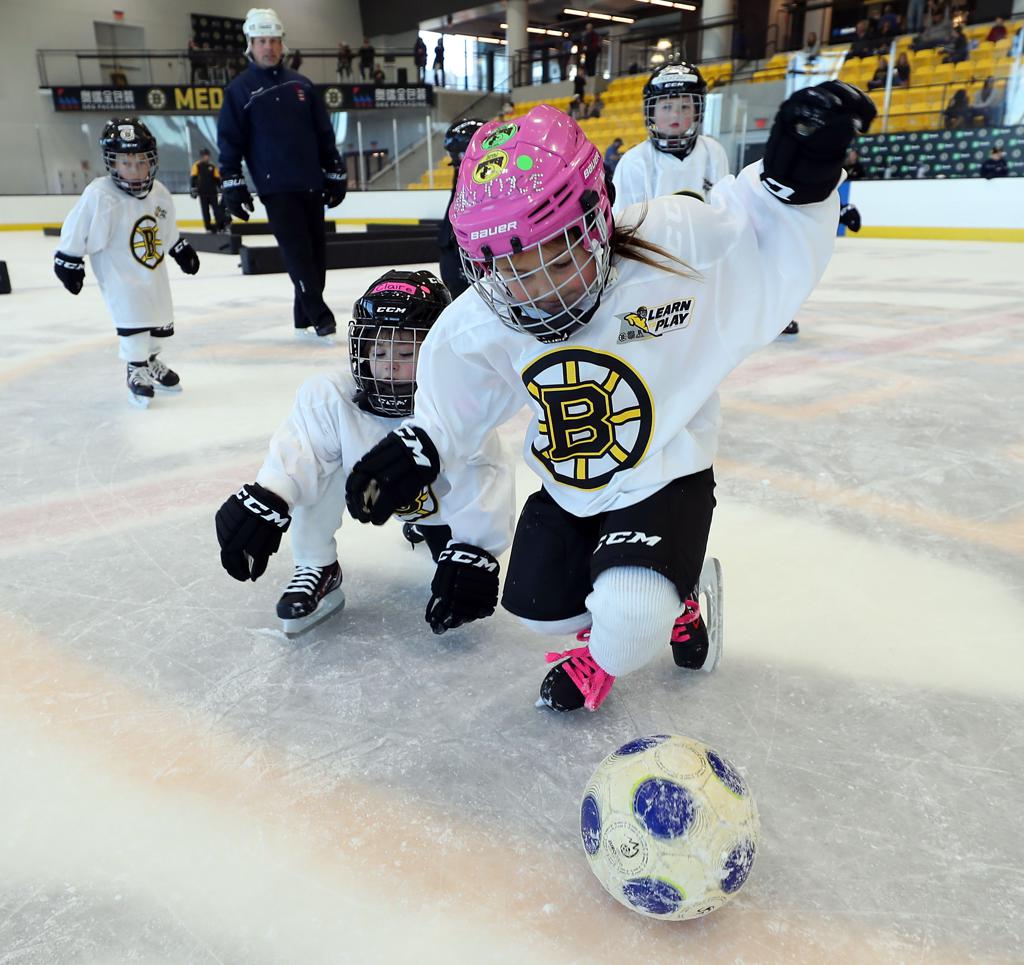 “The best players in the world have to make plays in a 10-foot-square box,” Rausch says. “I have a picture from during the playoffs last year where, with a goalie pulled, all 12 players are in 1/6th of the ice. But mom and dad sometimes will say with their 6- or 8-year-old that there isn’t enough room out there. Are you kidding me? And if we think that we’re going to make it easier on our kids because by giving them more space, we’re doing a disservice to their development.”

Also, not yet the point at 8U.

“We should be teaching a kid position-ing, not necessarily position,” says Rausch, noting that at 8U, getting a player to play any certain way could take a back seat to simply making the trip to the rink about as fun as it can be. “If I’m coaching 8-year-olds, my No. 1 job is to have every one of them become a 9-year-old hockey player. It just has to be all about fun and activity.”

Positions will come in due time.

“Positioning is defined by where you are on the ice in relation to the puck, your teammates, your opponents, the referees,” Rausch says. “And if we can teach kids positioning, they will be fine when they get older. You hear all the time about how a player was one position until college. I played all five positions my senior year in college because it kept me in the lineup.”

Consider that anecdote – that playing multiple positions kept a player in a Division I college lineup, not vice-versa – the next time you hear that an 8U player is narrowing his or her focus.

“Definitely not the truth,” says Rausch. “Especially in the old system of full-ice. It’s not the case. At the youngest age groups, before puberty, the ones who have the most success are typically the ones who mature earliest – the bigger and faster players. The 8-eight-year-old who is a little ahead maturity-wise, of course they’re going to be successful, especially with all the extra space that was out there.

Players will develop on different timelines, and not being the best player on a team is no reason to think about doing something else if an 8U player is having fun.

“Yeah, again, it comes down to long-term athlete development,” Rausch says. “The best 8-year-olds are not necessarily the best 18-year-olds. The worst 8-year-old could be the best 18-year-old. Part of it comes down to what passion you’re instilling in a player. There might be an 8-year-old who is the best player in the country – but, if by the time he or she is 14 and finds an interest other than hockey, it doesn’t matter. You don’t get to be a world-class player in any sport if you don’t love the game.” 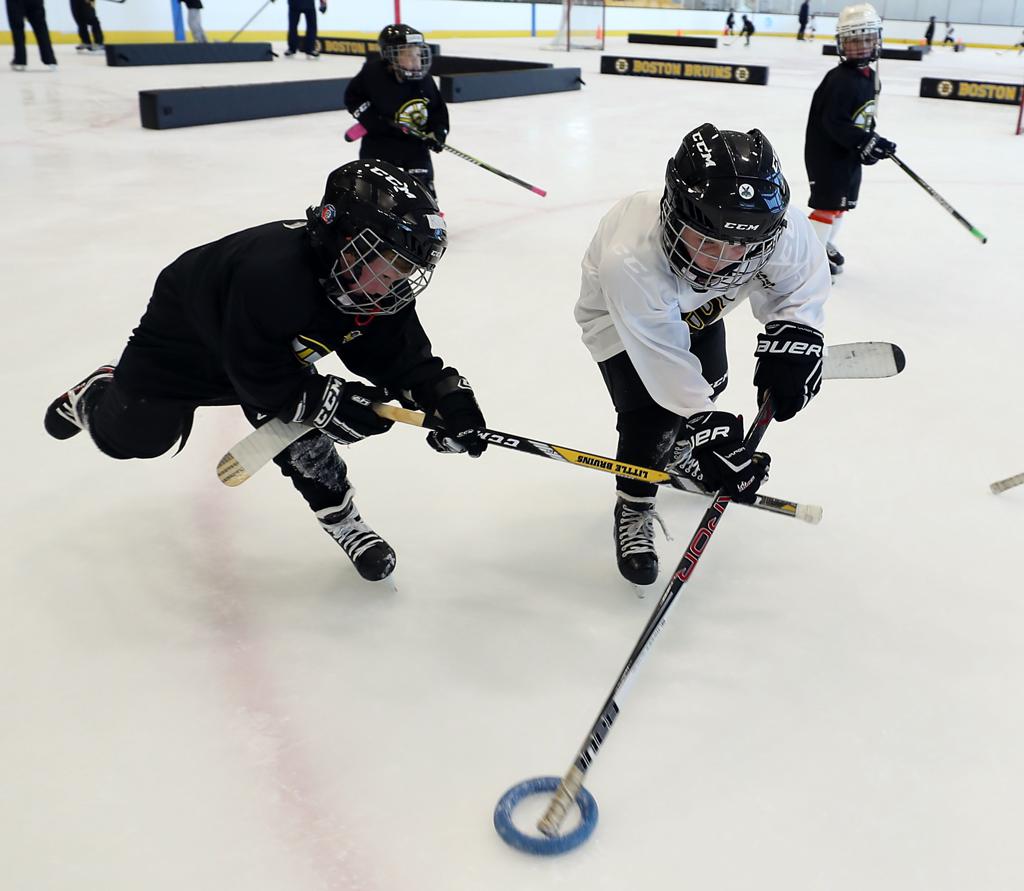 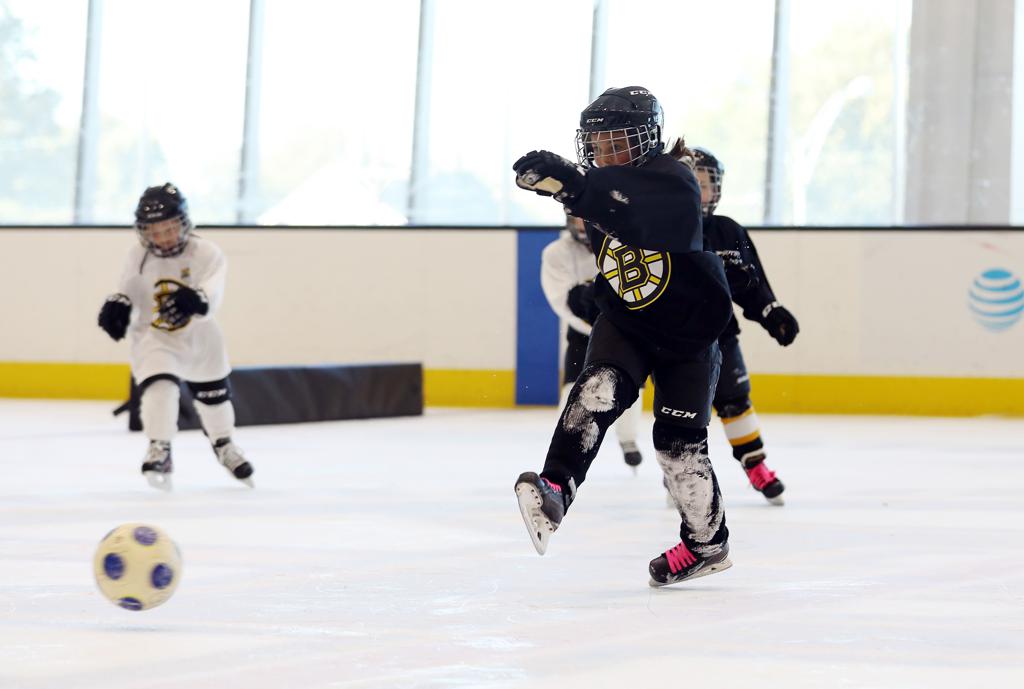 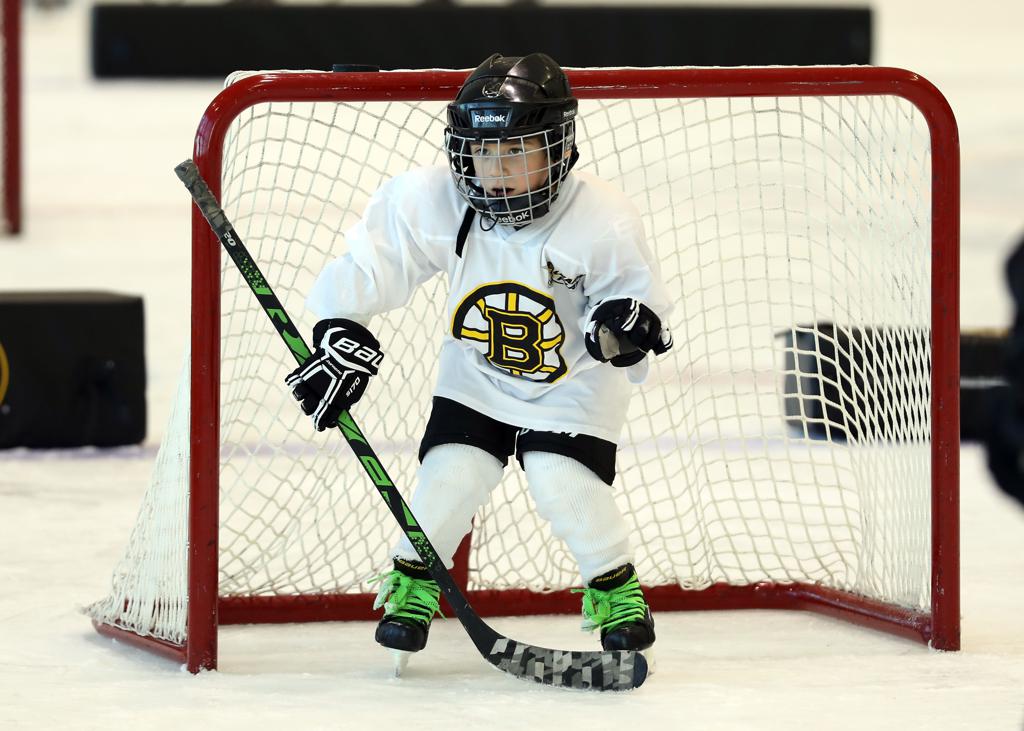 You won’t get better at hockey by playing other sports

“There are people who think that, and they couldn’t be more wrong,” says Rausch. “Playing multiple sports gives kids the chance to pick and choose different sports, to use different muscles and experience different things. Show me a kid who is specializing by 8-years-old and I’ll show you a kid who will probably have a significant injury by the time they’re 16. Overuse is the biggest part of it, but the other part is that they don’t get to experience different things.”

Hockey is hard, and seasons are long. Focusing on one sport for so long can limit overall athleticism.

“Playing other sports, like baseball or soccer or basketball or lacrosse, you’re cross-training, keeping your muscles fresh, doing different things and learning how to balance,” Rausch says. “It’s the physical literacy part of it. Rake a 14- or 15- or 16-year-old hockey player now and they can’t do a cartwheel or handstand or somersault. Eventually, kids who can do those things and have that innate athletic ability, might end up passing them. It’s great to be the best 13-year-old, but isn’t it better to be the best 23- or 24- or 25-year-old and play in the National Hockey League?”

If you can’t score yet, you’re going nowhere

“It’s obviously not a bad thing,” says Rausch of goal-scoring phenoms at 8U. “I’d rather have a kid who likes to score and wants to score a lot of goals. But because he or she doesn’t score a lot at 8U doesn’t mean it’s the end of the world. You might be the worst 8-year-old hockey player because you might have just started. Fast-forward seven years and that same 8-year-old might have flipped spots.”

We need a power play.

And that big knot of players, often playing in front of parents reminding them to spread out, is also not a bad thing at 8U.

“It’s actually a good thing because we want players to want to be around the ball or the puck,” Rausch says. “They want to be involved. They don’t have the capacity to say, ‘It went out there, so I should do this.’ That’s why we don’t teach algebra or calculus to children. We teach them how to add or subtract, then multiply, then divide and move on to more complex things. It’s absurd what people will allow in athletics and not in an academic setting. Imagine a teacher telling a math class that, for the last five minutes, my three worst students are going to go sit in the hallway.”