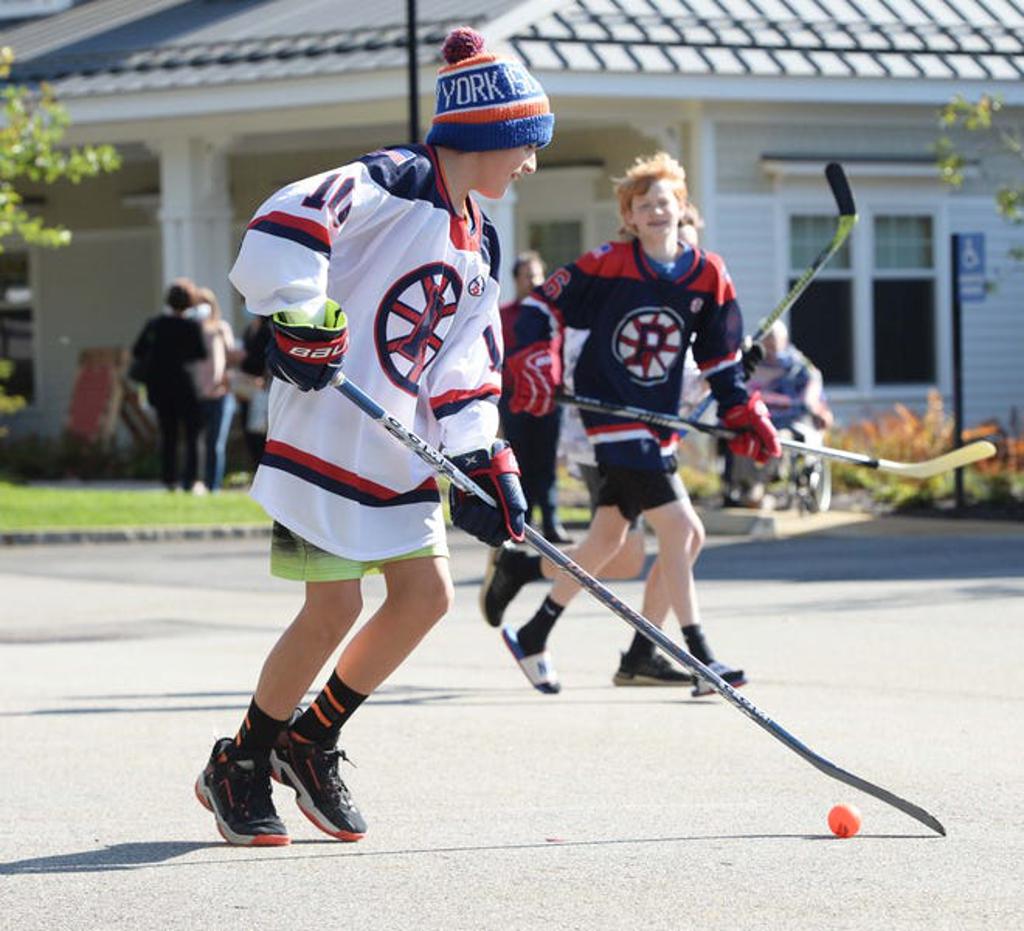 When Kara Perkins, an activity director at a nursing home in Braintree, was brought the idea of local kids playing a street hockey game for residents, she knew it was a keeper. Unfortunately, as Covid spiked at the time, any plans would have to be put on hold.

As it turned out, though, Perkins, who lives in Pembroke, was able to put the plans into motion a little closer to home this past October.

“I approached my son’s [Pembroke Youth Hockey] coach and then I also reached out to our local assisted-living facility,” says Perkins. “I said, ‘I do what you do in Braintree and my son plays hockey,’ and she said they would love that.”

From there, it was a matter of logistics in terms of getting her son’s team, along with a few other players from the organization involved in the street hockey game for the residents of Bridges by Epoch.

“It was awesome,” Perkins says of the game that lasted about an hour and a half. “It was a beautiful day in the 70s. All the parents came and all the grandparents came, and everybody was sitting outside. We brought coolers for the kids and they were introducing themselves to the residents – asking if anybody played hockey or if any of their kids or grandkids did. They were chatting them up, and it was great because the residents had made signs of with names and numbers, and they were sort of waving them and the kids were putting on a show for them.”

As far as a community event to serve multiple generations goes, this would be hard to beat. And Perkins, who has been taking her own kids, now twin 15-year-old daughters an her 13-year-old son, to meet with her own residents in Braintree for most of their lives, knows firsthand the benefits of that priceless interaction.

“My kids have been coming into the nursing home since they were six weeks old,” she says. “So my son has done this kind of thing before, but his friends they were just really great, too. I was so proud of all of them. And I know that the coaches were, too. They just all seem to enjoy it.”

As this event was not too far from the fall storm that knocked out power to much of the South Shore, including most of Pembroke, there may be continued opportunities to consider how Pembroke’s youth hockey players might be able to keep helping beyond the street hockey game.

“I asked them if they wanted to do something like this again, and everybody including the coach was, like, ‘Absolutely,’” says Perkins. “And I’ve reached out to three senior housing complexes in Pembroke to ask if the kids can come around to do some outdoor cleanup. Everything is just hard with Covid and liability, but the kids really liked it and they’d like to do more of it. We all know that camaraderie off the field and off the ice is so important. With volunteering, everyone wins.”

Including, and perhaps especially, residents.

“Our kids are older as teenagers, and the residents really enjoy it,” Perkins says. “And I know from looking at what I do for the last 20 years that they’d love to see the 4- and 5-year-olds, too. I’ve already had other parents reach out and ask if their kids could do something like that. And I’ve asked if the kids could do shoveling or cleanup in the winter. I think everybody involved in Pembroke Youth Hockey would like to see more of it. I’m hoping we can come together and come up with some more ideas.”

“It was a little bit of normalcy,” says Perkins. “We were able to bring people together and felt a little bit more like normalcy. It’s hard to explain to the kids that they’re not just out there on a Sunday playing a street hockey game – they’re really making these peoples’ not just days but their weeks. What they’re doing is so much more than just having fun with your friends. It’s so much bigger than that. It’s making people happy who haven’t been able to experience much of that with Covid.”

Perkins encourages anyone who might have an interest in building something similar between their local program and any facility such as where she works or Bridges by Epoch, reach out to help make that happen.