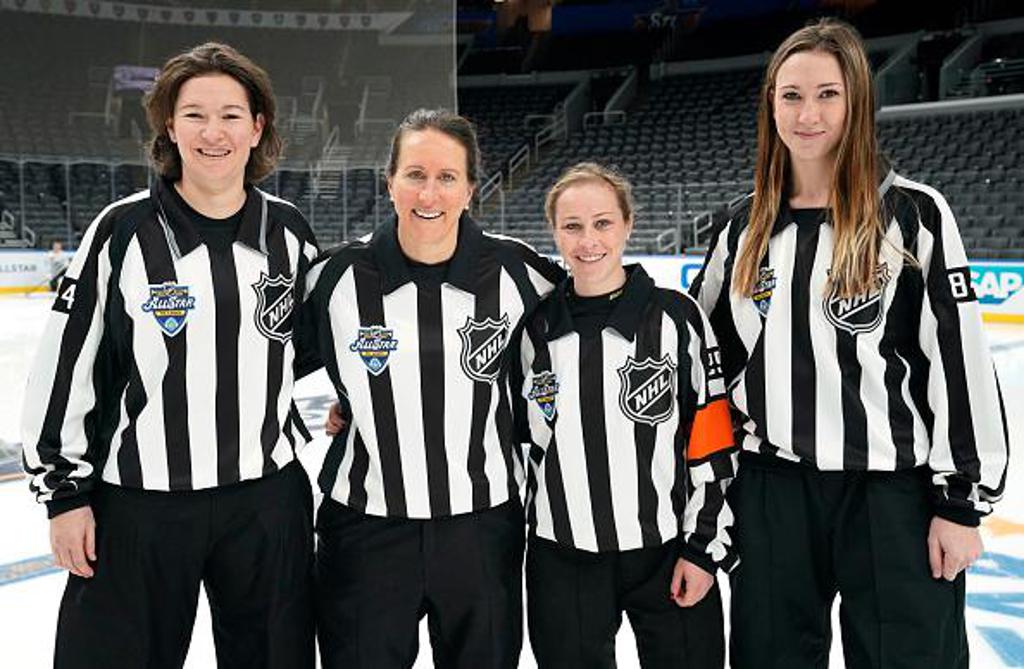 When trailblazing hockey official Katie Guay was growing up as a youth player in Westfield, the number she chose to wear for a few years was 99. At that point, it was simply a bold choice for one of the few girls playing in the organization.

Guay, along with fellow Massachusetts native Kelly Cooke, is part of a class of 10 female officials who will work games this season in the AHL.

“When you step into a new league, just building that respect factor among the players on both benches and the coaching staff, it takes time, so that first game you really do have to get your feet under you and shake off the nerves a little bit,” Guay says of Lehigh Valley vs. Wilkes-Barre/Scranton. “But, once that first puck went down, I felt comfortable and felt that all my preparation leading up to that moment was paying off. Once the puck went down, I felt comfortable. And I was excited to be out there. It was opening night there, so there definitely was a lot of energy in the building, and it was a fun atmosphere to be a part of.”

For her part, Cooke, who once played for Guay while she was a coach at Nobles (both Guay and Cooke had outstanding college careers at Brown and Princeton, respectively), made her mark on history on Oct. 17 with Rochester vs. Utica.

“It was definitely unexpected and a great opportunity for us,” says Cooke, who grew up in Andover. “And the AHL has been very supportive in getting us the resources we need to succeed. [I was] definitely excited for the opportunity, but also kind of in a mindset that, in order to work those games and stay at that level, you need to perform on the ice. So it was a mixture of this being a very humbling experience, but also the realization that this is our chance to show them what we’re capable of.”

While Cooke and Guay weren’t working the same game, they’re no strangers to making history together.

“We’ve had a lot of great opportunities together,” Guay says. “And in 2019, we officiated the Women’s Frozen final in Hamden, Connecticut, and that was also the first time in Division I that four females took the ice. So it was great to be part of that historic moment with her as well.”

Cooke remains a friend and a fan of Guay’s.

“She’s amazing,” Cooke says. “I’ve been lucky enough to ref with her since I started working college games in 2013. She’s kind of been a part of every step of my officiating journey so far. And, thanks to her, she has been one who has really gone above and beyond in giving back to the game. She’s also our fearless leader and she’s opening a lot of doors for female officials, and male officials as well. She’s a ton of fun to be around but she is also extremely talented and takes her job very seriously. I think it’s that balance that makes her so special.” 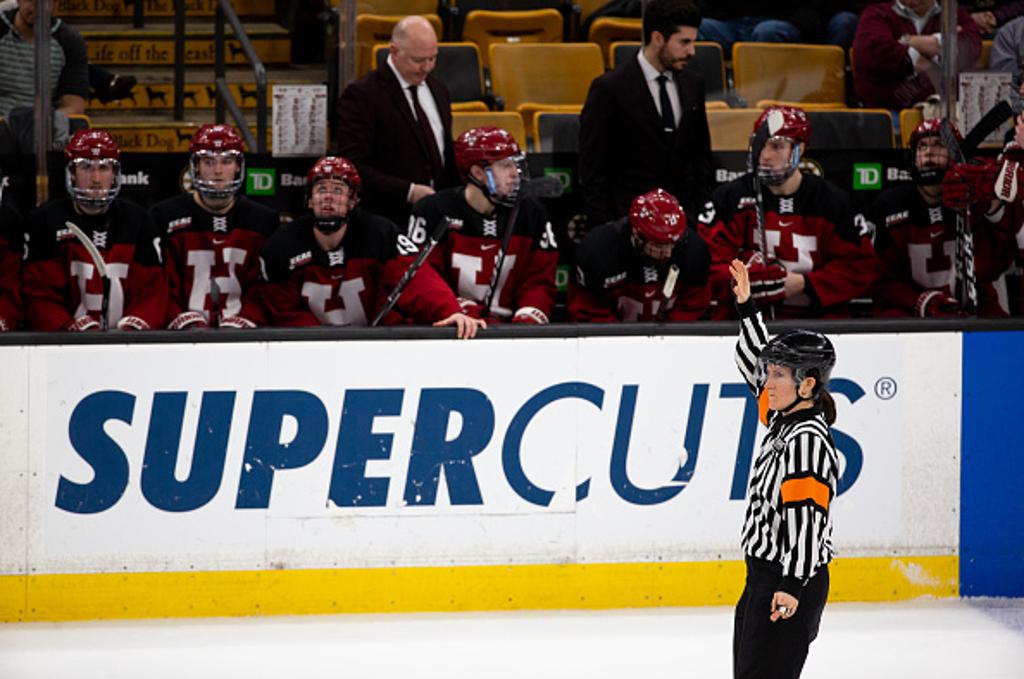 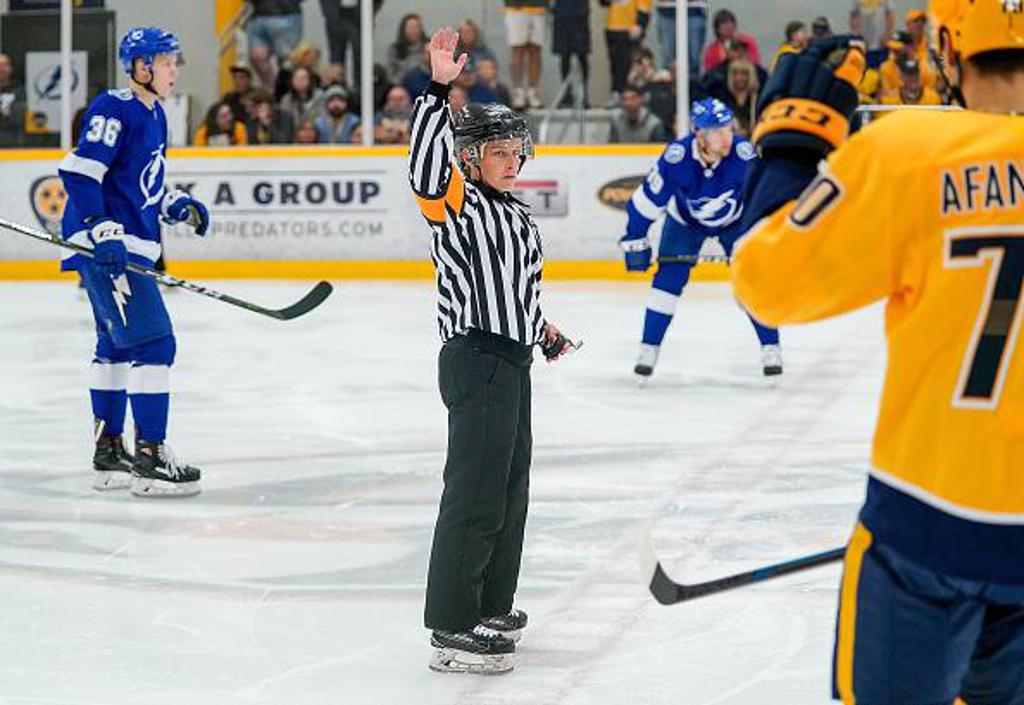 Guay, who has also officiated in the Olympic Winter Games, says she had received well over 100 texts in the “little bit of a whirlwind” that followed her AHL experience.

“As an official, I’m not quite used to the positivity that usually comes from a game, so it’s nice to have heard from all these people,” she says with bit of a laugh. “But it certainly has been great to see how many people I have connected with over the past few years. The day before the game, Wes McCauley reached out, and a bunch of guys from the AHL reached out. It’s just been incredible.”

Even youth hockey teammates chimed in.

“I’ve heard from people I played mite hockey with back in the day in Westfield,” says Guay. “And people from all various times of my hockey life. I never really thought me reffing hockey would bring me back in touch with so many people I’ve crossed paths with over the years.”

Like Guay, Cooke also worked her game between a couple of in-state rivals.

“It was a great experience,” Cooke says. “The teams I had were kind of rivals, and it was their home opener, so it was definitely a physical game. They move so much faster than the games I’m typically doing, but they’re also more predictable because the skill level is so high and the hockey IQ is so high. So in that kind of capacity it is easier because it’s easier to anticipate.”

Cooke also heard from players during the game.

“Yeah, a few came over to congratulate me during TV timeouts,” she says. “That was pretty cool, just to know they respect us in the same way they respect the other officials and that they’re excited to see what we can do out there – then to see us prove ourselves at that level. Everybody was super awesome and supportive.”

The best thing about making history …

“Having the opportunity,” says Guay, who says skating and knowledge of the game, followed by a willingness to learn, are the keys to being a good official. “I’ve been in the right place at the right time. There have been other females who have not had a chance. I’m fortunate to be where I am. I’ve worked hard along the way, but it’s nice that 10 females have been given the opportunity to work within the league.”

The advantages of officiating …

Cooke, who came along a few years behind Guay, but started reffing games at the age of 12 because her older brother was calling games, has turned a side job for a teenager into something that has given her a way to extend her days at the rink.

“I love being in the rink, and anything that I can do to be in the rink more, I was happy to be a part of,” she says. “You know, I just love being on the ice and part of the game. If I’m not reffing a game, I’m probably watching one on TV – just a love of hockey that never really goes away.”

Cooke was an assistant captain at Princeton during her playing days. Guay was a captain at Brown.

“I’m proud of my playing days,” says Guay. “I guess I have now surpassed maybe the number of years that I’ve played, but I had a great run as a player in Division I hockey, so I’m really proud of everything that I’ve been able to do on ice skates as both an official and as a player.”

Now, it’s likely Guay is more known as an official, which may be just fine with her.

“You get a front row seat to some great hockey games,” she says. “I love being out there in the action. We’re the third team on the ice, we get to skate. I’ve been fortunate that my skates have been my passport around the globe. I’ve been able to travel significantly through hockey and meet some amazing people around the world.”

“I’d really never set my eyes on men’s pro hockey,” says Guay. “The Olympics and NCAA and Frozen Four championship games had always been my goals. [In] 2019 when I attended my first NHL Exposure Combine, that really opened my eyes to other opportunities. So I’m continuing to learn and grow. And I’m excited to see where it might take me.”

Cooke, after the AHL opportunity, is also looking ahead without knowing what might be coming.

“My goal has always been to referee in the Olympics,” she says. “And that’s coming up in February. So, hopefully, that will be in the cards. But I’m kind of just taking it day-by-day. We never expected to have the opportunity to work in the American League. That was unexpected and an amazing opportunity, but you never really know what’s going to come your way.”

“I think I would say [officiating] is a great way to stay involved in the game that we all love,” says Cooke. “You make amazing friendships and you work with amazing people, and you get to travel the world and do something that you love. I think it’s a great opportunity for former players who are done playing to take a different path and still stay involved in hockey – and be involved with a new kind of team.”

Officials may not get enough credit for being fans of the game, and part of that comes from being pitched between two teams, but rare is the official who doesn’t love hockey.

“Eventually, everyone’s playing days are going to come to an end – some sooner, others later – but eventually the time will come,” Guay says. “But, through officiating, it’s another way to stay involved in the game. And I highly recommend that all players and coaches, while they are still coaching and playing, give it a shot. It’s a new perspective and gives you a different lens to watch the game. It improves your IQ of the game and I’m certain that it will make players better if they give officiating a good shot. So I highly encourage everybody to try it. It’s a fun way to stay involved in the game, and it could take you to a lot of fun places – and you’ll meet a lot of amazing people along the way.”