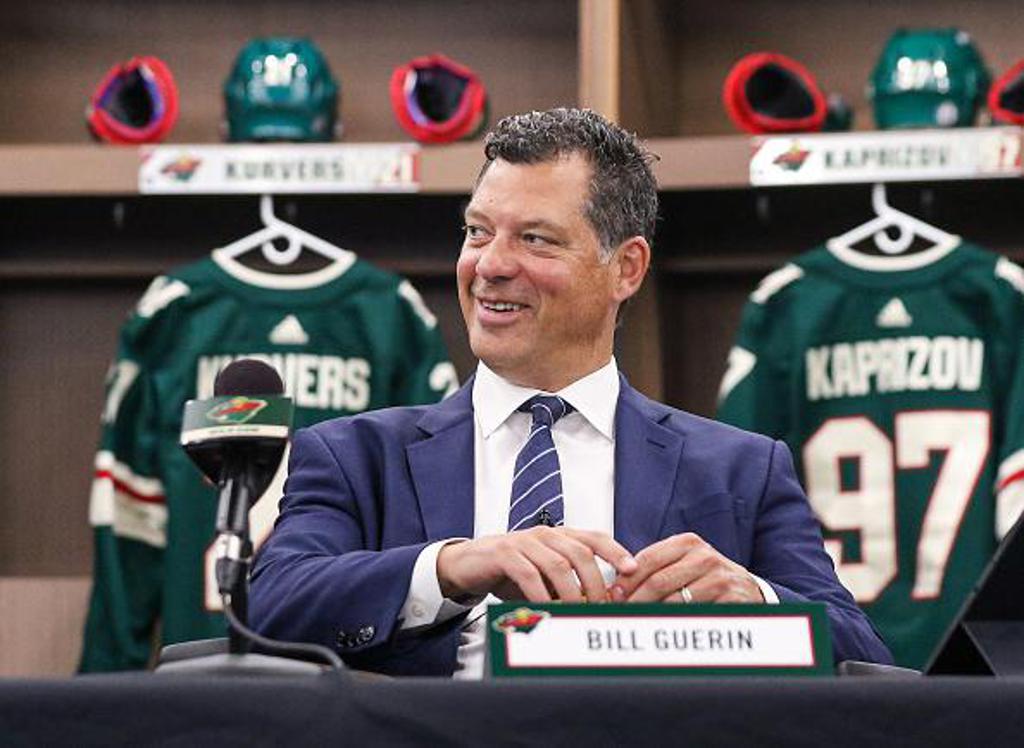 If you’re looking for an NHL team outside of Boston but with roots in Massachusetts, the Minnesota Wild would be an easy team to root for. By dint of hiring Bill Guerin as General Manager two years ago, the Wild are as much a reflection of Massachusetts – even Western Massachusetts, more specifically – as any other corner of the league.

Born in Worcester and raised in Wilbraham, closer to the New York State line than to Boston, Guerin, thanks to the influences of his mother and father, takes a whole lot of Western Mass with him into his day (and night) job with the Wild.

Being a general manager, in addition to the big things such as player negotiations, salary cap considerations, roster development, and the small details that intend to help make a franchise just a little better than it was the day before, is also about building a culture.

As someone who has played with some of the most recognizable players in the world and within a number of successful franchises himself, Guerin has many influences. To this day, some of the most significant come from how he was raised in Wilbraham.

How much of his upbringing is a part of his approach today might make the Wild an even easier team to like.

“A lot,” Guerin says. “You know what? My father was in the business world and he was in a leadership position. And it was all in how he treated the people he worked with and who worked for him. That’s so important.”

Guerin’s father passed away 14 years ago, but the impact on his son remains, and has a good deal to do with the culture Guerin is after in Minnesota.

“He was just like a real fun guy,” Guerin says of his father. “A good leader. He didn’t care if you were the CEO or the janitor, you were getting treated the same. I just learned that from watching him, and it’s the only way to do it. It doesn’t cost you anything to be a good guy, to be a good person.”

And here Guerin is nearly 51 years old, having played one of the most impressive, lucrative, and possibly most underrated careers in the history of Massachusetts-born players, working like crazy trying to build something every day. He says his mom, now 78 and “still firing around,” is a ball of happy-go-lucky energy. Perhaps that’s another side of the work ethic Guerin comes by honestly.

But the truth is, there’s something more to why a U.S. Hockey Hall of Famer, three-time Olympian, World Cup of Hockey champion and four-time NHL All-Star would sign up for one the most time-consuming jobs in sports.

When asked why, he pauses.

By volume, few jobs on earth mean more hockey than general manager, and Guerin, hired by owner Craig Leipold in August of 2019, couldn’t be more grateful for the opportunity.

Who else starts the day with Travis Tritt’s “It’s a Great Day to be Alive”? 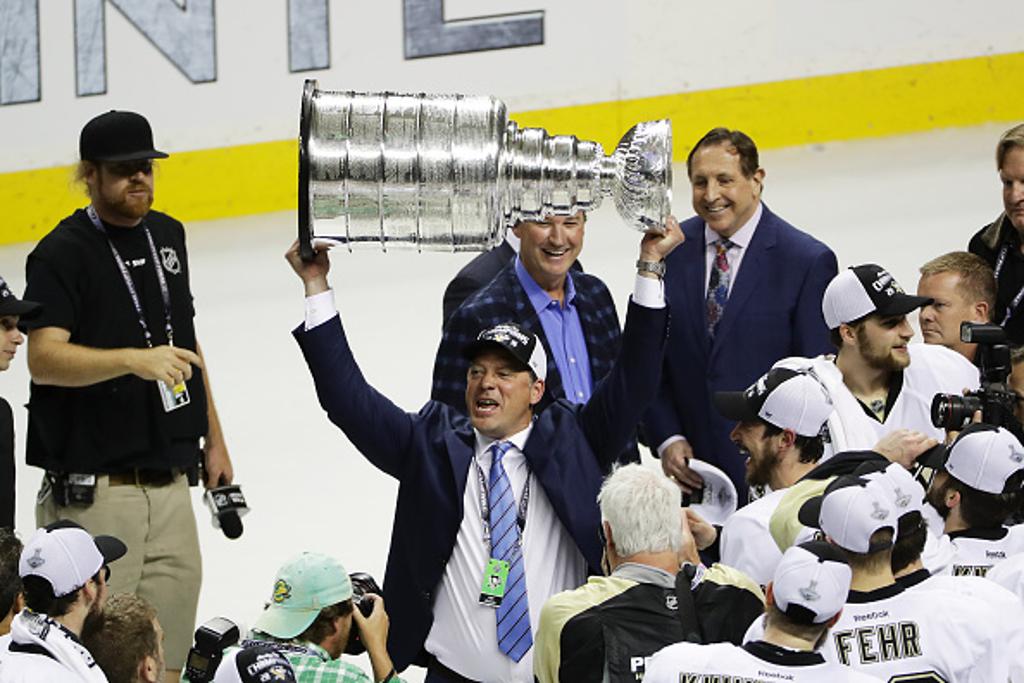 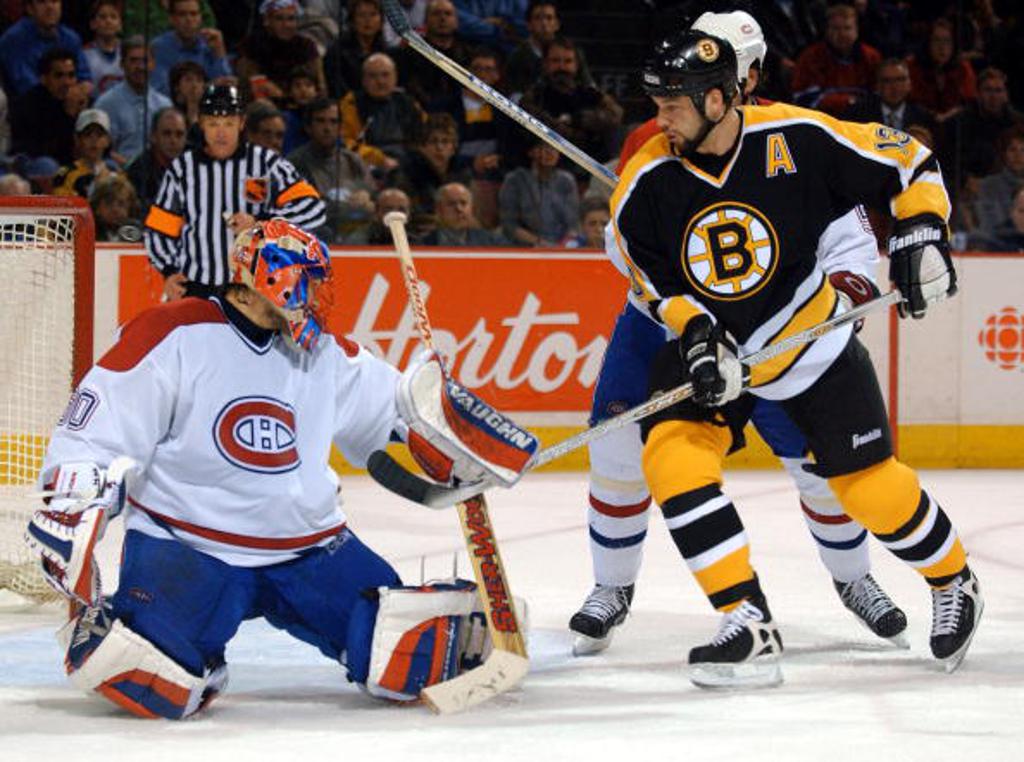 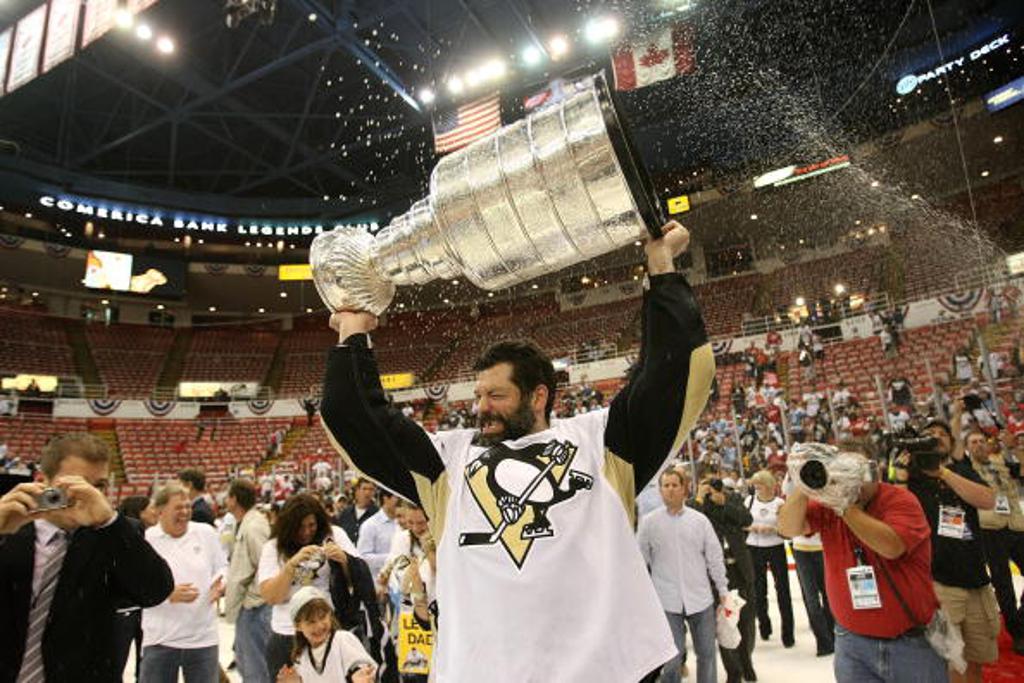 “I guess it kind of depends on what’s going on and what wakes me up,” Guerin says. “But I’m usually up between 6:30 and 7. I’m an alarm guy. I naturally wake up early, but maybe not that early.”

That’s where the music comes in to play.

“[The alarm] is on the iPhone, but I have a morning playlist that I play every morning.”

The first couple: “Travis Tritt ‘It’s a Great Day to be Alive.’ ‘Born to Run’ by Springsteen. ‘Should’ve Been a Cowboy’ by Toby Keith. ‘Lovely Day’ by Bill Withers.”

That there is the playlist of a guy looking forward to the day.

Breakfast for the father of four is with “whoever is around,” these days. With kids in New York City, Minnesota, New Mexico and Arizona (“They’re having a blast, they all are, and it’s so much fun to see,”), there isn’t a lot of overlapping.

“Normally, I kind of eat it by myself, usually at home, if not everybody is up yet or if I just have to kind of eat and go,” says Guerin of the offseason. In-season has the added advantage of team support.

“A lot of times we have breakfast at the rink,” he says. “During the season, I usually wait until I get to the rink – and we have our chefs there, so it’s awesome.”

After breakfast at home, Guerin then jumps into his SUV – he had been “a sedan guy” but didn’t want to have to worry about the Minnesota winters – and makes the 21-mile drive to the team offices adjacent to Xcel Energy Center in Saint Paul.

“I don’t mind [the commute],” says Guerin. “It gives me time to kind of get ready for my day and make phone calls on the way. It’s time for me.”

During the season, or even until the past few weeks of this offseason, things will move a little faster than they do in late August. This time of year, the phone isn’t always glued to his ear.

“You know what, it depends on what time of year it is,” says Guerin. “Recently, my phone has been really quiet. But in that three weeks with the draft, free agency and the expansion draft, you’re on the phone for a good part of the day. With teams on the East Coast and the West Coast, you’re taking calls at all times of the day. That’s just the way it is.”

Guerin had just returned to Minnesota after a trip to the New Jersey Shore for what might be the last little bit of downtime, such as it is, before the long NHL season begins. And if you see Guerin when the season does begin, shore attire will likely be replaced by something little more formal.

“On game days, no question I’m going with a suit,” he says. “On non-game days, it’s a little bit more casual. I’m just expecting everybody to look their best. On a non-game day, you don’t have to wear a suit, but don’t look like a slob. You’re not just representing yourself, you’re representing the Minnesota Wild. So, look good.” 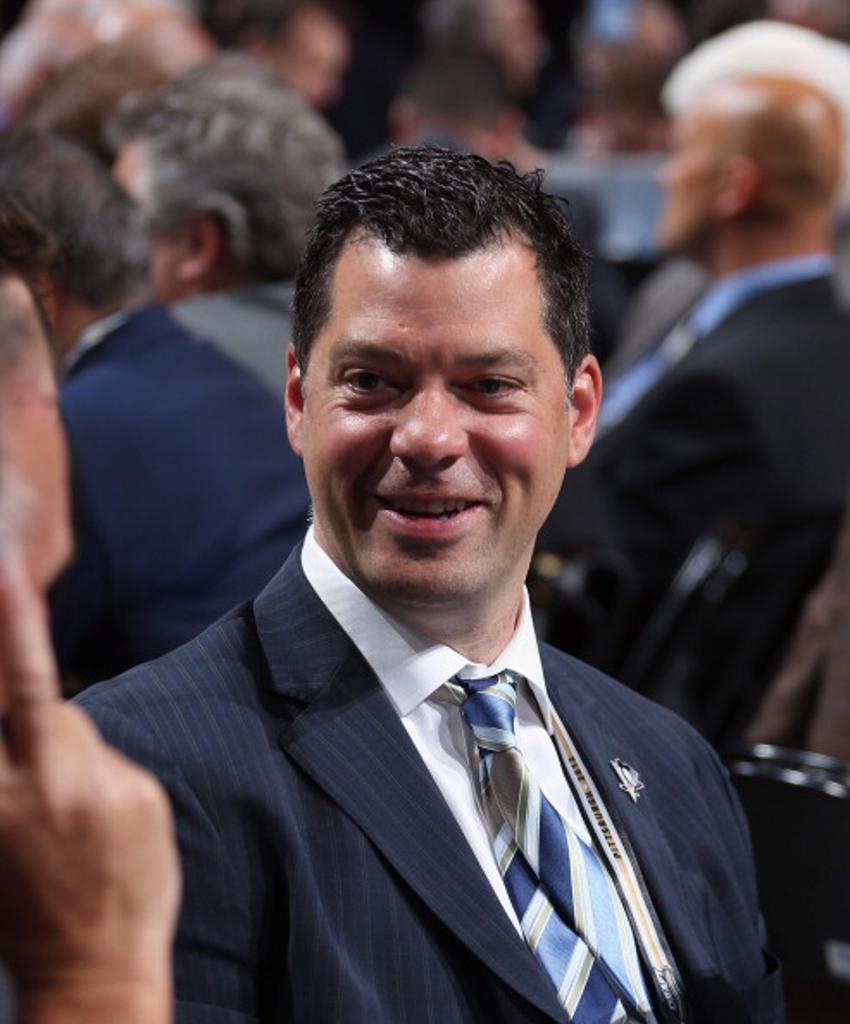 “On game days, no question I’m going with a suit,” he says. “On non-game days, it’s a little bit more casual. I’m just expecting everybody to look their best. On a non-game day, you don’t have to wear a suit, but don’t look like a slob. You’re not just representing yourself, you’re representing the Minnesota Wild. So, look good.” 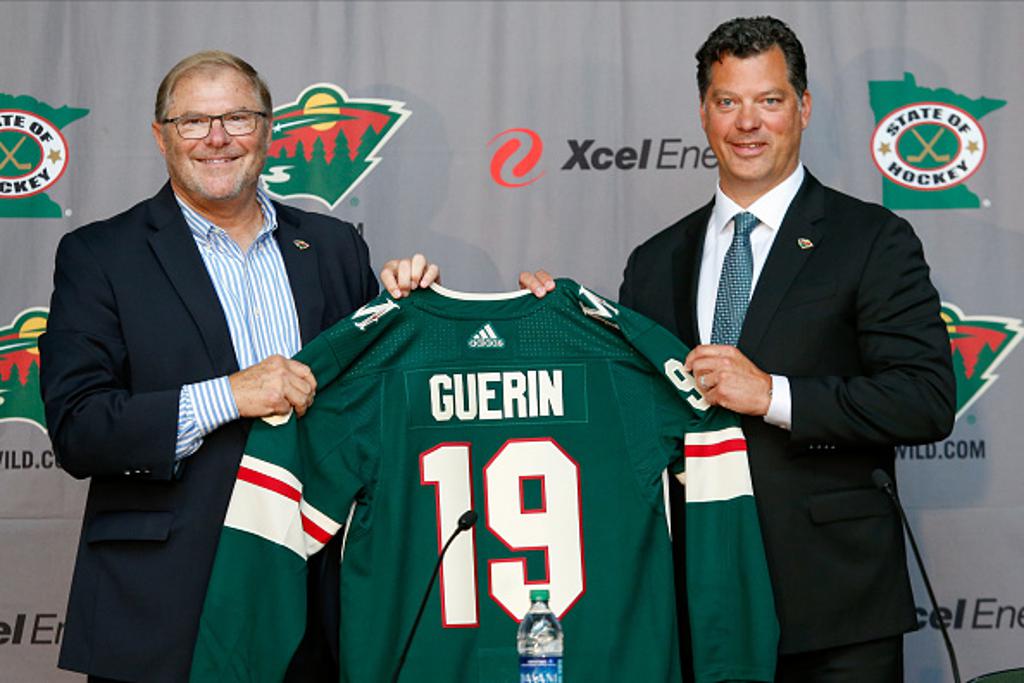 At the rink or in the office?

“Either, or,” says Guerin. “Usually at the rink because our chefs are so amazing. After the season, a lot of times I’ll make my lunch at home and bring it in. I started doing that this year to try to lose some weight.”

“I was eating at the café all the time,” he says. “And, the next thing you know, I’ve had four club sandwiches in a week.”

Guerin will occasionally sneak in an afternoon workout if the team is on the road “to try to eat a part of the day,” but if there is a workout for him, it’s generally first thing in the morning.

This time of year, there’s a decent chance he’s out the door and making that 21-mile trip back home at a reasonable hour.

“It has to do with the amount of work,” says Guerin. “And I encourage my hockey ops staff to do the same thing – because there are so many days we come in early and stay late because we have to, that, you know, if you’re done with your work, leave. Go home. Go spend time with your wife, go spend time with your kids. There are so many times during the season that you can’t, so take advantage of it when you can. Nobody gives you medal just for staying until five. It doesn’t make you better. You can’t confuse efforts with results.”

There are days this time of year he’ll be on the road by 3.

“I think it’s for sanity,” Guerin says. “I really think you need to take time and make sure you’re doing the things that you don’t have the time to do during the season. Because when it starts there’s no going back.” 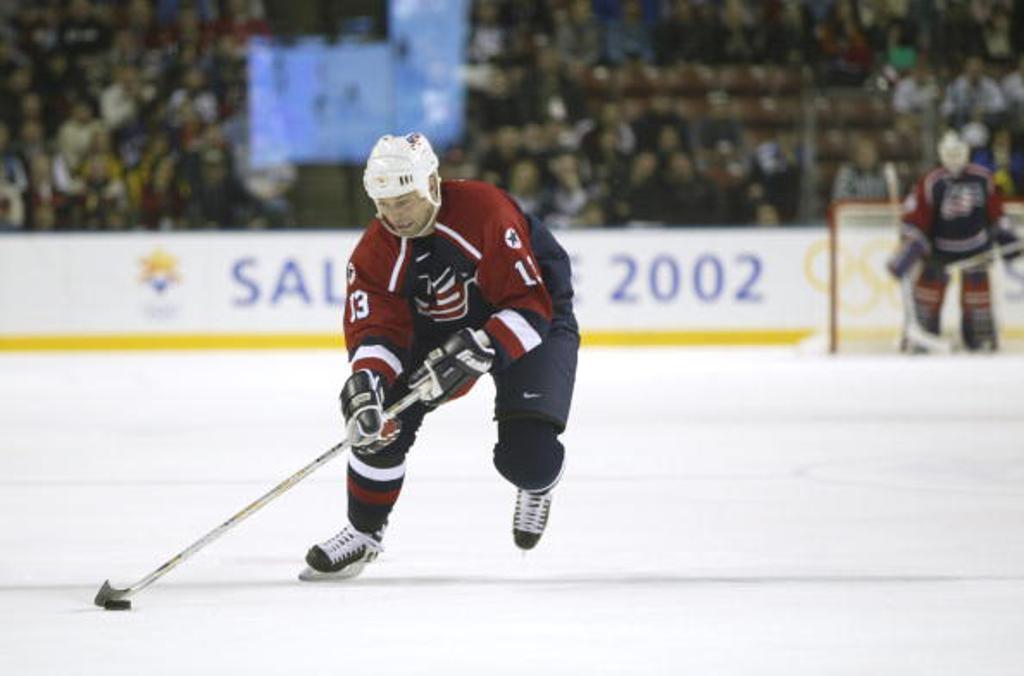 "I think I’ve played on some teams that had great cultures. I’ve had some great teammates. I was in Pittsburgh for 10 years, and we had a fantastic culture. It’s very, very important to me. And you know what? It all starts with people. And we have very good people. It starts at the top with our owner, Craig Leipold, and it trickles on down.”

“Right now, it’s slow, so I eat dinner with whatever part of my family is around,” says Guerin.

Like so many of the rest of us, the evening is for television to wind down. And there’s no shortage of shows on the roster for the Guerins this time of year.

“Oh, yeah,” he says. “You name the show, I’ve watched it. I’m really into that F1 series right now. We watched it during the season and I still, every Sunday now, watch F1 racing, which is crazy. But I love it. I’ve watched a ton of documentaries. I think they’re coming out with some great stuff right now. You know what I just watched and was a great documentary? It was on Bob Geffen. I thought it was amazing.”

In terms of evening scrolls through social media, Guerin has cut back on that in the past year or so.

And when he does scroll, it’s not as the general manager of the Wild but as a human being. A human being from Western Mass; and who has played alongside legends of his time (“Our generation was ridiculous”), including dating back to a World Junior Championship team that included Mike Modano, Jeremy Roenick, John LeClair, Tony Amonte, David Emma and Joe Sacco; who has played for Stanley Cups and Olympic medals and tried to take as much from those experiences as possible to make a new set of experiences for a franchise’s players, hockey ops staffers, media and game-night staff, chefs, equipment managers, ticket sales crews, elevator operators and on and on.

In short, he’s tried to make the Wild a better place.

“Yes,” says Guerin. “I think it comes from years of being involved in a good culture. I think I’ve played on some teams that had great cultures. I’ve had some great teammates. I was in Pittsburgh for 10 years, and we had a fantastic culture. It’s very, very important to me. And you know what? It all starts with people. And we have very good people. It starts at the top with our owner, Craig Leipold, and it trickles on down.”

In some ways, it also echos out to Western Massachusetts.