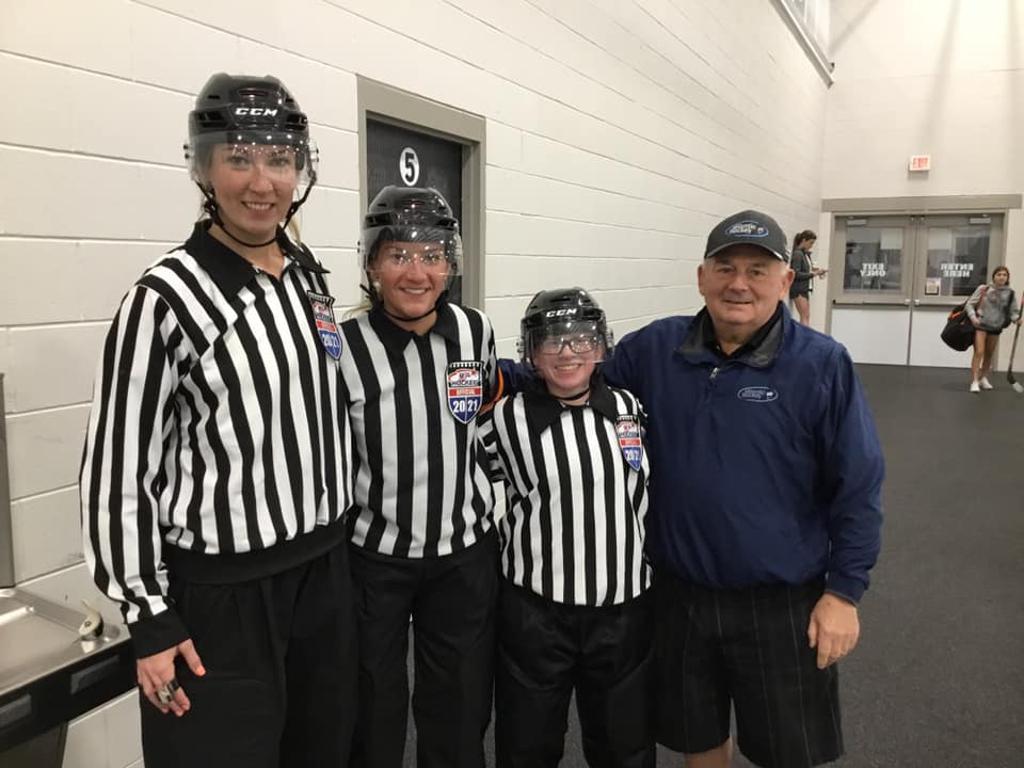 “We’re trying to make it so that women know there is a path for them to get to the next level.” – Gene Binda

With officiating teammates from the NCAA, USA Hockey and, importantly, the North American Hockey Academy, Binda’s Referees Crease, which he founded back in 1980, recently hosted Women’s Officiating Experience. And despite the interruptions of a year ago, Binda has some high hopes of building for the future around such events.

“Last year, because of Covid, we didn’t do it,” Binda said. “But, two years ago, we had women from all over the country come in and get certified, and we actually pulled a lot of women out of there and brought them into college hockey.”

This time around, a dozen women with referring aspirations attended, and the program earned some rave reviews.

Kirsten Welch, whose NCAA career at Robert Morris came to a close in 2019, texted Binda after the event, calling it “a phenomenal learning opportunity” for the developing of female officials.

“We were treated like rock stars,” Welch wrote. “If you’re a graduating D1 women’s hockey player and are looking for alternative ways to stay in the game – this camp is a great way to get you noticed. … It’s a career path that D1 female hockey players should take [into] serious consideration.”

Welch, with fellow attendees, had the opportunity to hear from some of the biggest names in women’s officiating, including Katie Guay; to listen and learn; to referee and to line, going over the referee system with one and two, and with four-person teams.

what they're doing right...

Working to get the word out through supervisors up and down the East Coast, plus on Facebook and Twitter, Binda set out to accept anyone who applied. There was no cost to attend the event apart from registering with USA Hockey.

“It was just a great event,” said Binda, who has assigned officials all over the country. “There aren’t a lot of paths for that as women. A lot of guys take up their spots. And now that women’s hockey has exploded, it gives us an opportunity to hold this.”

Binda is also quick to point out that while the program is on the forefront of creating new opportunities and paths, its reach extends beyond Massachusetts.

“It’s not just a Massachusetts flavor,” he said. “But it’s a collaboration with people who care about the game and realize that we need good women’s officials. We’re going to help somebody get to where they want to go. No different from the men. Everybody has goals.” 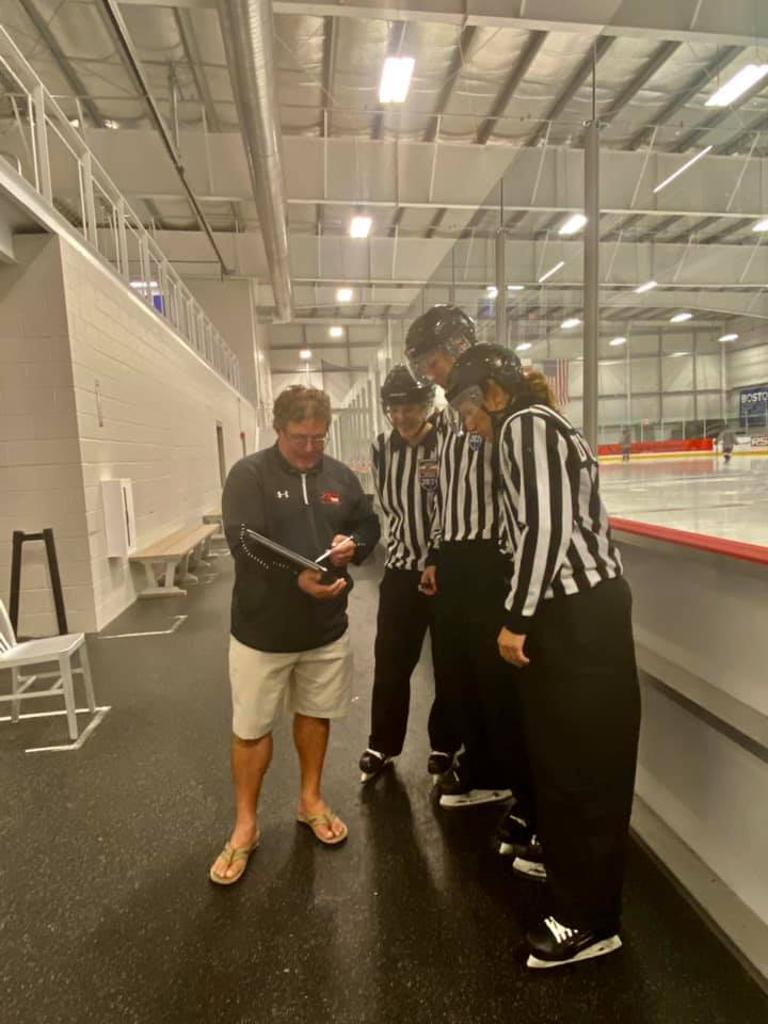 ...It’s a collaboration with people who care about the game and realize that we need good women’s officials. We’re going to help somebody get to where they want to go. No different from the men. Everybody has goals.”

the best thing about this event...

Creating opportunity can be a gift in and of itself.

“The best thing is watching them succeed,” said Binda, who himself was able to break out from officiating games mostly close to where he grew up in 1970s South Boston because of a chance meeting with a Boston Globe coworker. “They have to try twice as hard to prove that they’re good. Watching what they have to go through to get decent games, and now we have that opportunity to do that, is probably the most enjoyable thing that I do. When I ran the program two years ago, I walked away very humbled. [For the men], there’s so much work and the women have to work just to get a decent game.”

The program also creates its own cycle of positive momentum by exposing officials to role models. Binda looks for officials who can do at least a couple of things well for starters.

“You have to be able to skate, that’s the number one thing,” he said. “And communicators – not just within the game, but, as they move through the system, communicating with me, with teammates and the coaches. So, it’s skating No. 1 and communication is No. 1A, not second. Both are equally important.” 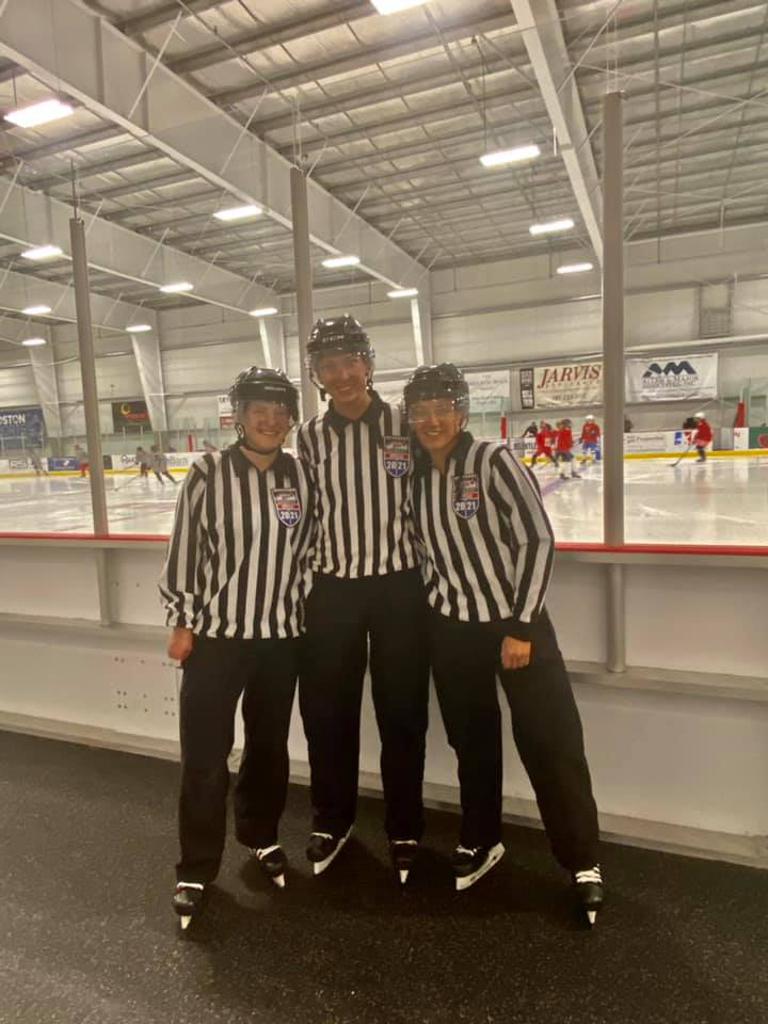 the next big thing...

Set this year around a college showcase tournament, next year’s edition will aim for a little more than the same.

“The [tournament] that was there, they have committed to us to make that a full-fledged camp next year,” said Binda. “They did a great job for us and they should be acknowledged – for the simple reason that they’re putting themselves out there. They’re taking a chance on officials possibly having an effect on a game, but they’re willing to take that chance for the women.”

Over Labor Day, Binda will be headed to Vermont with Guay and another well-known official in Jenny Cameron.

“Katie Guay and Jenny Cameron should be acknowledge for that, as well,” Binda said, noting that Guay’s impact to date has been significant. “She’s the first one there when we need somebody to speak. She’s a leader in this, a true leader, helping us break those barriers so more and more women can get in. And hopefully they will get recognized and move on to better and bigger things.”

When asked what is possible, Binda was clear.

“The possibilities are endless,” he said. “USA Hockey is doing the right thing by hiring a women’s Referee-in-Chief, and I think that’s the first step in making something really great. … And I’m not patting myself at the back, but I think we’re at the forefront of this. Right now, we have the opportunity to get these women more games and that’s what we’re doing. I’m just a pass-through. I’m going to get them ready for the next level. That’s what we’re trying to do.”