What Jerry York Looks for in a Player 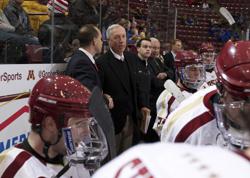 As Boston College head coach Jerry York eyes his 50th season behind the bench of an NCAA Division I program, and his 28th at The Heights, college hockey’s winningest coach has changed the lives of untold young players – many of whom are, themselves, not so young anymore.

While they have come in many shapes and sizes, players who possess a couple of traits will always catch his eye. And because, as he points out, players don’t move a lot between programs in college hockey, getting it right is key to that program’s sustained success.

“I think that the ability of a college coach to isolate which player you would like to play for you – and what they should bring to the table both on the ice and off the ice – is very important for us,” York says.

In terms of what that means on the ice, hockey IQ ranks at the top of York’s list. 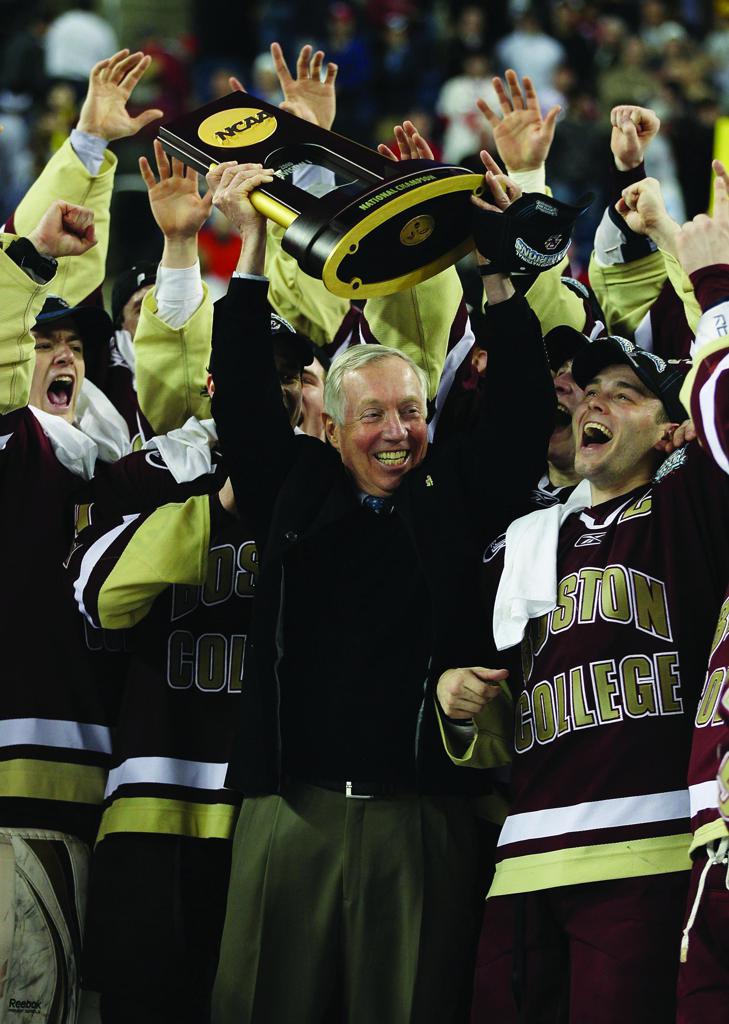 “You have to be able to really play without any fear – fear of making a play late in the game or just going in to a heavy traffic area.”

Considering the way his Eagles teams play, York looks for another vital component. Yes, BC can count on the interest of this country’s very best players, but they will need to be able to skate.

“And that’s the second most important characteristic for me,” says York. “If you can play the game unselfishly, without blinders, but also be able to skate, it’s critical. They don’t necessarily have to be the fastest player from goal line to goal line, but you have to have a burst.”

“You have to be able to really play without any fear – fear of making a play late in the game or just going in to a heavy traffic area,” York says. 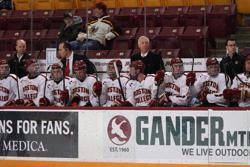 And you don’t have to be 6-foot-4 and 230 pounds to play that game for York. Somewhat famously, from a thread running through Brian Gionta to Nate Gerbe to Johnny Gaudreau, York wouldn’t shy away from players who were smaller in stature. Gionta played more than 1,000 NHL games. Both Gerbe and Gaudreau are over 500 in the league. Clearly, the gamble paid off for York, too.

“Size is not a huge factor for me,” he says. “You could be a smaller-stature player but really be strong on your skates, and you can play a hard and physical game as e 5-foot-7 or 5-foot-8 player. Now, if you get everything, in a perfect world, [it would be a] 6-foot-3 player. But I never shy away based on height. It’s more based on, ‘Can they play the game? Are they smart? Can he skate? And is he an unselfish player?’”

As the game has evolved, these elements are as important as ever.

“You can see some tremendous players who have great leverage and great strength,” says York. “It doesn’t necessarily mean that if you’re 5-7 you can’t play, and if you’re 5-11 you can play. You have to be willing to take a gamble on somebody like that if they have good lower body strength and compete. The players who are successful and smaller in stature have that DNA in them that they compete.”

At his core, York, after all these years – years that have included 134 points as a player at BC back in the 1960s, and, as a coach, more than thousand wins, 18 first-round draft picks, five NCAA titles, four Hobey Baker winners and inductions into both the USA Hockey and the Hockey Hall of Fame in Toronto – remains a fan of both players and the game.

“I love the player that competes hard and is a good teammate,” he says. “That’s what excites me: when I can go into the locker room and see the players that really have earned a great respect in the room. And, day after day, they just grind through the season. That type of DNA in the players is remarkable. I love to see that.”

“I love the player that competes hard and is a good teammate,” he says. “That’s what excites me: when I can go into the locker room and see the players that really have earned a great respect in the room. And, day after day, they just grind through the season. That type of DNA in the players is remarkable. I love to see that.” 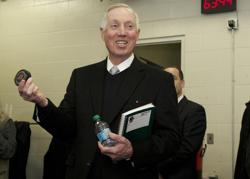 And it extends, of course, to his coaching philosophy, which is also a development philosophy. Yes, even at Boston College, where so many fans of the game may see a program that has it made, the environment is built for getting better over the course of a season.

“I just love it,” says York. “I just love in September having a collection of names and not being quite sure how long it’s going to take to become a team. Each year is different, but to take that group of players and make them a team, I’ve always enjoyed the challenge. I love the daily grind of the process – of September through, hopefully, the middle of April.”

Over the years, that development mindset has helped so many players reach the next level. In fact, over the last decade, Boston College leads the nation in alumni who have reached the NHL. Dozens who have played for York have gone on to earn an aggregate sum in the nine figures.

“You have to keep reaching and keep improving,” York says. “If you stand still, somebody’s going to be passing you. Whether it’s in the weight room and developing strength or working on conditioning on the ice, or just the basic skills of hockey in skating, shooting and passing. Fundamentals are so important. You can never quite get to the point where, ‘Hey, I don’t have to practice anymore.’ Whether we have an All-American who is a sophomore, we still push them and he still has to get better and better.”

During this NCAA offseason, York had, until their loss to the Islanders, been keeping his eyes on his hometown Bruins, but eight former Eagles were on playoff rosters as the second season dawned. Alex Tuch, Patrick Brown and Oliver Wahlstrom remain. Going back a bit, York also coached Vegas Golden Knights team executive George McPhee at Bowling Green for another element of franchise interest.

The things that might catch his eye during these NHL playoffs might be just about the same as if he were looking at players for Boston College.

“Everybody talks about offense, but just really good defense from players,” says York. “Whether it’s backchecking all the way into the zone or blocking a shot. I love to see goaltenders make incredible saves. And highlight tic-tac-toe passing that results in a red light. I kind of like that, too.”