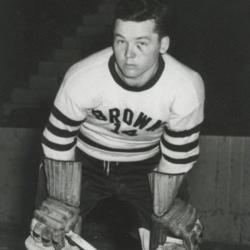 Picture of Bob Wheeler during his playing days at Brown University.

Massachusetts Hockey is saddened to learn of the passing of men's hockey great Bob Wheeler, 90, who passed away on April 13, 2021.

Bob Wheeler was inducted into the Massachusetts Hockey Hall of Fame in 2007, and was nominated twice to the United States HOF. He was one of the first inductee for Brown University in 1971. He was named to the Malden Catholic HOF in the late 50’s.

Growing up in Wakefield next door to Lake Quannapowitt and Veteran’s Field, Bob developed early interests in hockey and baseball. He attended Malden Catholic High School where he was a standout in both sports. Malden Catholic won both the Massachusetts State Hockey Championship and New England Championship in 1948, capping a season in which Bob scored 34 goals in 17 games. Later that year he was named to the Catholic League All Star Baseball team and played at Fenway Park against the Greater Boston All Stars.

Bob was an integral part of the renaissance of Brown hockey culminating in a Final Four appearance in 1951. Her was a phenomenal scorer, and now, seven decades later, still holds the Brown record for goals in a game (eight), goals in a season (36), and career goals (86). In addition, he had 12 career game-winning goals and 10 career hat tricks.Bob did all this in just three varsity seasons (freshmen were not eligible for varsity play in that era). 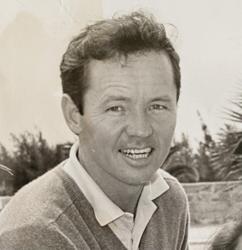 He also recalled that in the 1949-1950 season he was the first college player to use the “slap shot,” a technique he developed after watching it used by Roger Bedard of the Providence Reds. It was later used in the NHL for the first time by Bernie Geoffrion of the Montreal Canadians in 1955.

Bob served in the U.S. Army in Korea from 1952-55 and joined IBM as a sales manager upon his return. After a first date under Wakefield Independence Day fireworks in the summer 1955, Bob and Diane married a year later. Over the next thirteen years they moved together across the Eastern Seaboard while Bob was with IBM, and then settled the family in Hamilton when he started a new career in the investment business, initially for White Weld and then later at Merrill Lynch. Bob and Diane raised their children and stayed in Hamilton for the rest of their lives, also raising many lovable labs, collies, and spaniels.

A private service will be held at their home. In lieu of flowers, donations to the Northeast Animal Shelter, 347 Highland Ave., Salem, MA would be greatly appreciated. Arrangements by Campbell Funeral Home, 525 Cabot St., Beverly, MA. For online condolences please visit www.campbellfuneral.com

Click here for Bob Wheeler's obituary from the Salem News.

Click here to be directed to Bob Wheeler's obituary from the Boston Globe.