SS Eagles had quite the cheering section this season 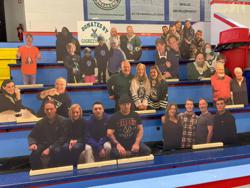 Dave Kane insists he can’t take credit. Instead, he’d like to give the assist to Boston 25 television personality Butch Stearns. One morning over coffee this past winter, Kane, who is president of the South Shore Eagles, caught Stearns’ report on a local hockey team using photo cutouts in the stands, and he thought it was a cool idea in the midst of fan-free games due to Covid.

The next day, Kane stopped into Rockland Ice Rink, where the Bay State Hockey League has an office (Kane is the league’s Director of Program Development), and he noticed how eerie things were in for a Rockland High School game.

Normally, the rink would be busy and Kane’s young sons might be serving a stick boys for their hometown high school program. Instead, it was quiet, and it had Kane thinking back to his senior year of high school hockey – where on Senior Night he skated a carnation over to his mother and gave his father a hug.

For local teams these past few years, Covid would change all sorts of memories. Kane thought that maybe he could do something about how both the Rockland and Abington high school programs would remember things, particularly for the seniors.

“We have close ties to the Rockland team, and the Abington team,” Kane says. “I went home and I contacted my vice president, John McGrath, I said, ‘John, I can’t take credit for this, I’m going to let Butch Stearns take credit for this, but we have to do something like this.’ More than 90% of Rockland High School and Abington High School have played through our organization. This is our time to give back to them.”

McGrath was a quick yes, as were members of the board of the South Shore Eagles, which includes about 160 youth players.

“It was unanimous, instantly,” says Kane. “Regardless of cost, we were going to make this happen.”

Kane didn’t have much time but with McGrath – “[He’s] is an Abington guy; I’m a Rockland guy,” Kane says – divided and conquered in terms of compiling images, and Sign Design out of Brockton executed. 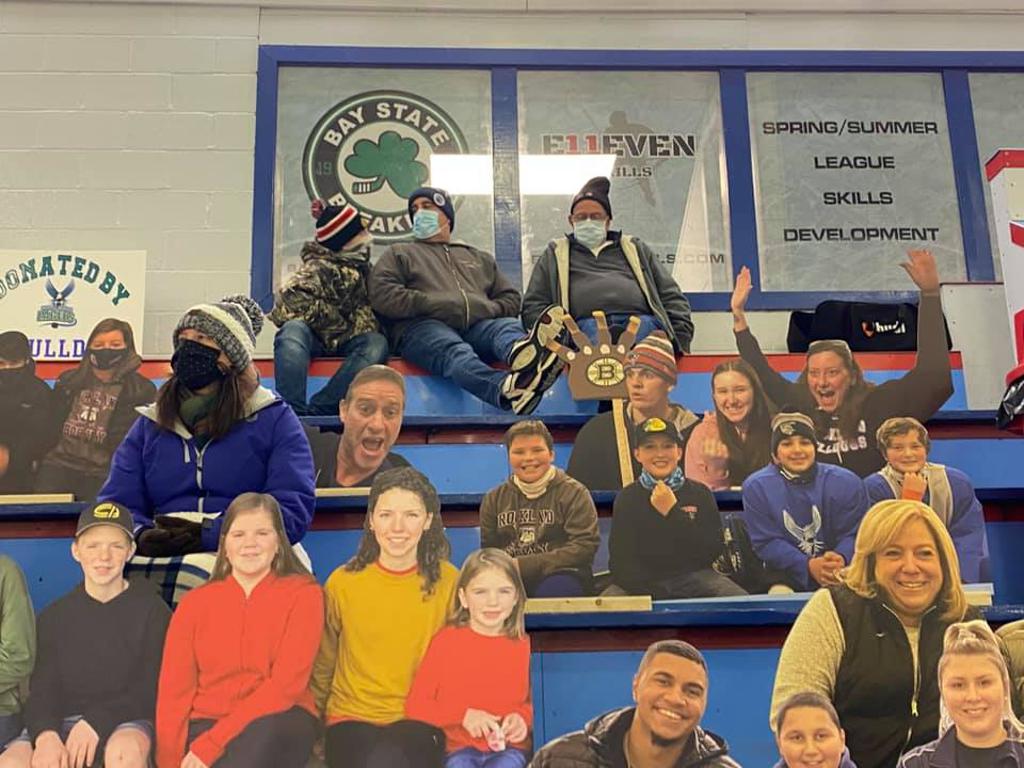 “It was great for the kids, great for the families, even if it was just a chuckle or laugh. There was one family with their dog. It was super cool.” 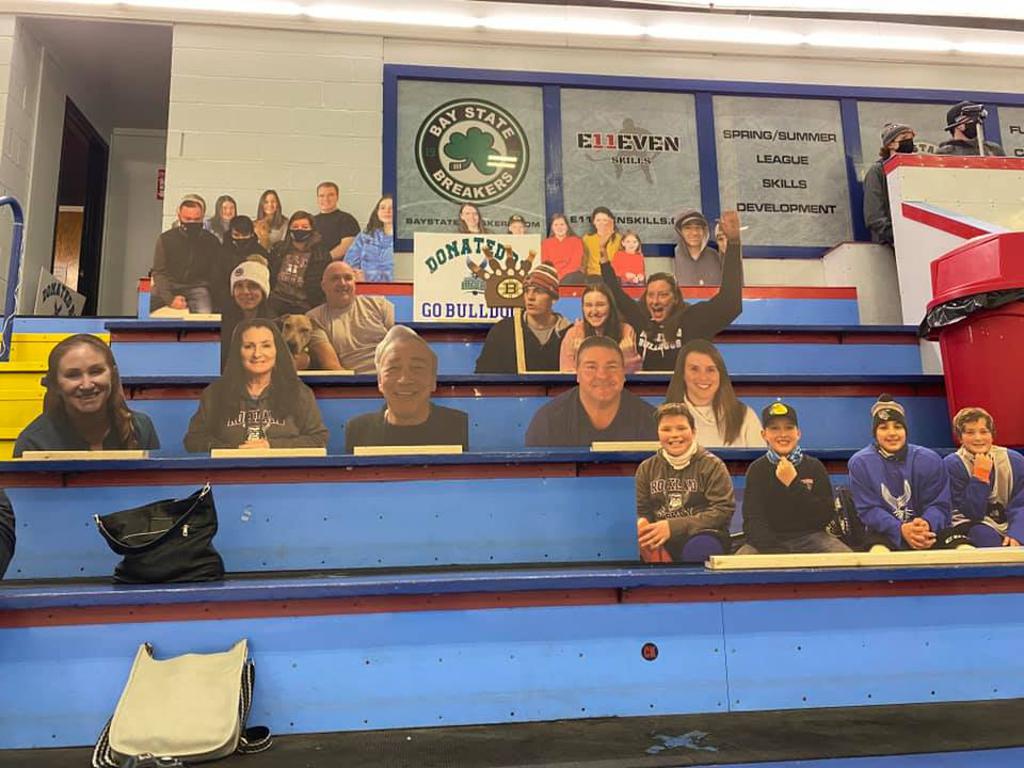 The payoff
“Fast forward, Abington versus Rockland always packs the barn,” says Kane. “That is the game. It’s always a big game and a big deal. So, this year, we were able to provide these cutouts for both teams – essentially giving that feeling of the stands being full. It was really cool.”

In other words, while Covid could have shut down just about anything and left Kane with a bunch of cutouts with no place to go, it turned out to be a significant win.

“It was great for the kids, great for the families, even if it was just a chuckle or laugh,” he says. “There was one family with their dog. It was super cool.”

The best thing about the program is …
If one visits the South Shore Eagles website, they would be greeted with the message of Teaching the FUNdamentals of Hockey.

“As my kids are getting older, what I’m finding is that, no matter where these kids decide to go play hockey, whether they play club or town, they always kind of find themselves having the most fun within their town programs,” says Kane, whose sons are 12 and 10. “That’s what it’s kind of known for. It’s just really all about being with their friends and experiencing that enjoyment of playing with their friends.”

The most challenging thing about the program is …
“This year I can pin it on Covid,” Kane says. “That was certainly one of the most challenging points, and with youth sports in general. It’s making sure we’re making the right decisions at all times for these players and for the families. It’s how to keep them safe, and how to balance development with cost. Ice costs are always going up and it’s really challenging to stay competitive with development and offerings while keeping it affordable for everyone to play hockey – not just the ones who are maybe more financially stable.”

The final word
While the idea clearly became a success, both in pulling off the feat and also providing memories for the players, Kane can’t help but wish their story was shared a little more broadly.

“I was hoping through something like this that someone would’ve caught wind of it in another town,” says Kane. “Not for the recognition, but I wanted them to see it – so that another town or program could do it and kind of share that same level of excitement with their organization or their town high school team that didn’t get to have their folks there. With that being said, just as I tell everybody in my organization, we are here to develop hockey players but also develop even better people. So that’s something I want to leave the organization with when my time comes, if someone says, ‘He really impacted my kid’s life’ as a young adult or whatever age level they may be. And I think that that motto radiates throughout our organization and our court coaching staff, and our players. I think that’s really important.” 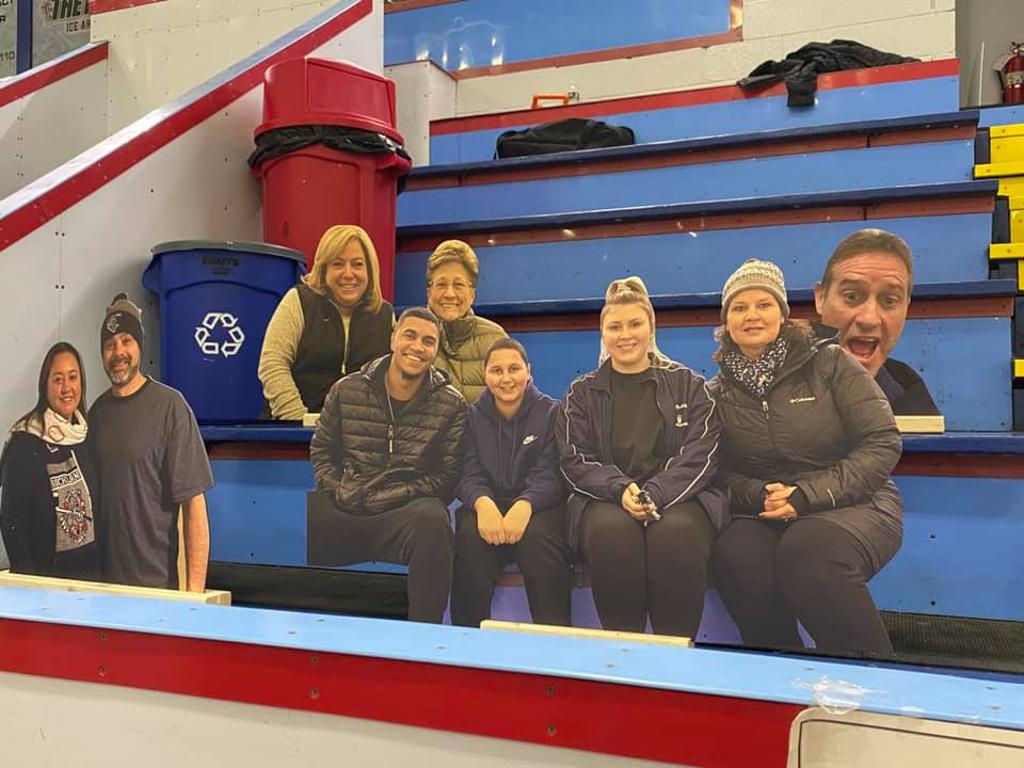 "I tell everybody in my organization, we are here to develop hockey players but also develop even better people. So that’s something I want to leave the organization with when my time comes, if someone says, ‘He really impacted my kid’s life’ as a young adult or whatever age level they may be. And I think that that motto radiates throughout our organization and our court coaching staff, and our players. I think that’s really important.”