For the Surette family in Braintree, goaltending is the familial position of choice

Goaltending is a family affair in the Surette household in Braintree. Thanks to following in the footsteps of his goaltender older brother, Brian Surette started as a kid in net nearly 50 years ago. And while he has slowed down a bit since his first time in the pads around the age of 5, he still plays men’s league.

Just getting started, relatively speaking, are his kids – Dan and Eva – who between them play goalie on five teams.

Eva is a 14U who plays for Braintree Youth Hockey as a bantam, on the Braintree High School JV team and for the Charles River Blazers, while 16-year-old Dan plays midget hockey and for his Braintree High JV team.

In all, it’s about six or seven days a week of life between the pipes for the Surettes. 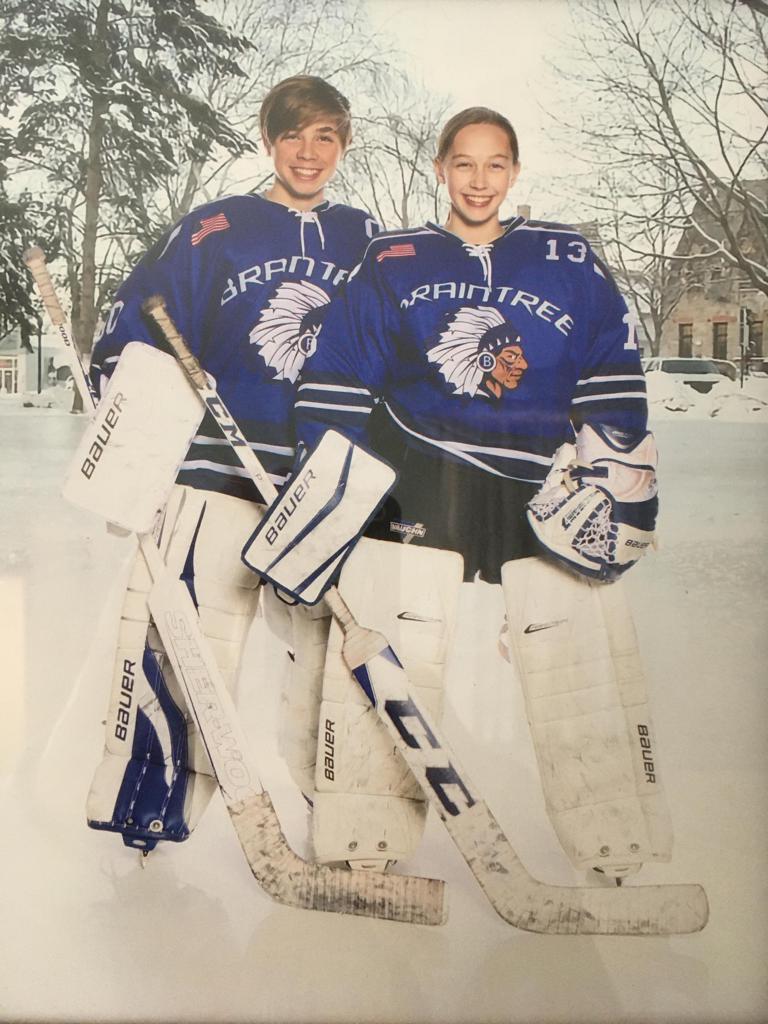 “I never really let them feel like it was their fault,” he says. “If it gets to you, it already got through so many people that it’s not on you completely. Imagine how it feels when you’re the one who saves the day. That’s the angle I wanted to take.”

Brian, who grew up in Wilmington, played in the local youth hockey system and on the ponds before playing high school hockey and making a run at walking on at Northeastern in the late 1980s, took to the position immediately.

“It was almost inevitable that I would play net,” he says, owing to his older brother’s interest. ”I don’t know how he got into it, but I loved it from the get-go. I guess it was just the challenge of being the last man standing before the puck goes in the net. And you’re in an almost every play.”

It may have been just as inevitable for his kids.

“It was kind of my dad when I was younger, and I saw his goalie helmet, and that kind a got me stuck on it,” says Dan, who also stuck with the helmet theme as a catcher in baseball.

Was it even a choice for Eva?

“A little bit,” she says. “I kind of wanted to follow my dad and Dan in being a goalie.”

Eva also plays field hockey and softball in Braintree, but hockey is her favorite sport at this point.

Her favorite thing about being a goalie?

“When you make a big save and everybody comes over to you,” she says.

For Dan, the thrill is similar.

“Honestly, just hearing my teammates after a save,” he says.

Playing for his hometown teams has helped, too.

“Playing with all my friends that I’ve been with in school, just seeing them on the ice, it’s just so fun,” Dan says. 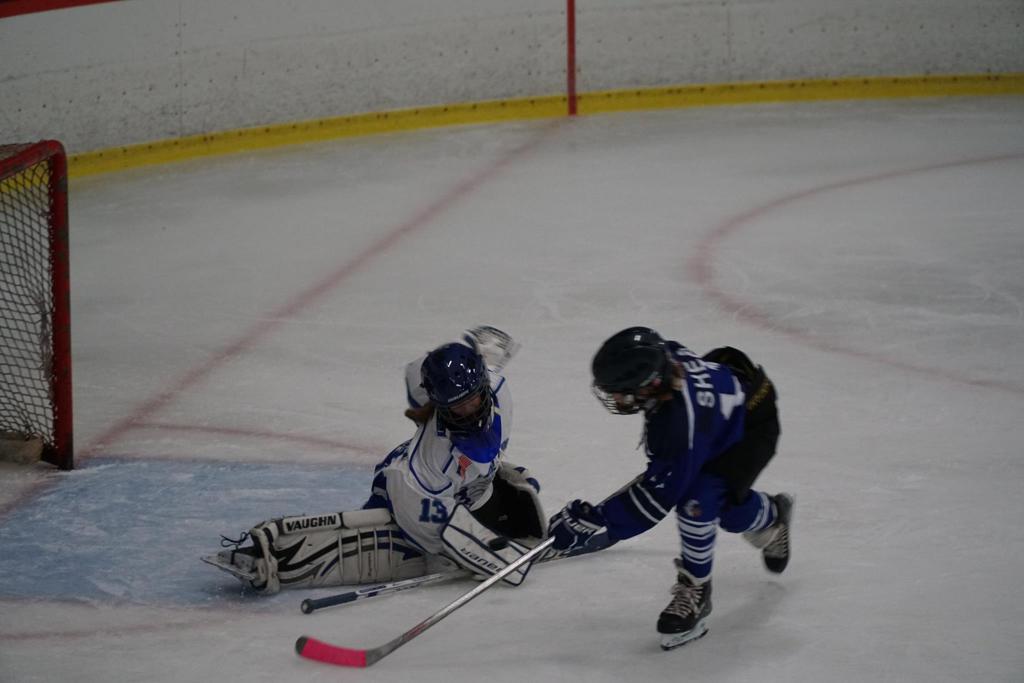 Brian Surette with his adult team 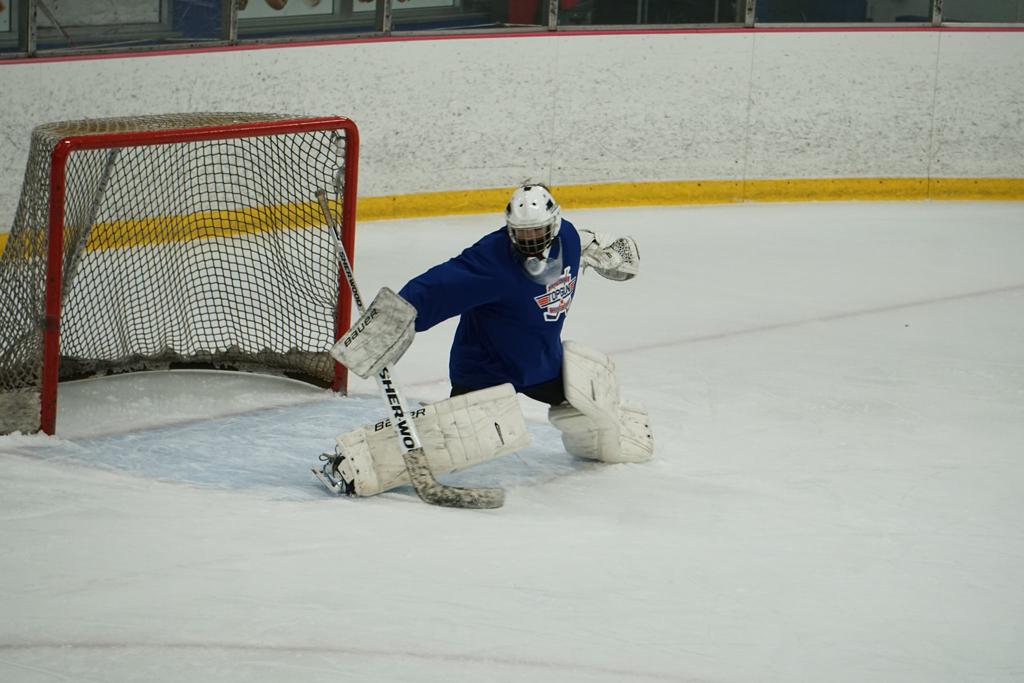 Brian, who wasn’t comfortable with either Dan or Eva playing exclusively in net until squirts, understands he’s in a unique spot – both because of his own passion for goaltending and also because so many parents aren’t sure they’d want their kids in net.

For Brian, he doesn’t quite see it that way.

“I never really let them feel like it was their fault,” he says. “If it gets to you, it already got through so many people that it’s not on you completely. Imagine how it feels when you’re the one who saves the day. That’s the angle I wanted to take.”

Brian isn’t typically thinking about the worst when shooters are staring down his kids. In fact, he’s not thinking about much more than he would be if he were in goal himself.

“If the shot goes off, I kind of react like I’m making the same save,” he says. “Like, ‘OK, I would be making my shift over,’ but I don’t think, ‘It’s my kid out there and I’m worried.’ I think of how I would react and I just assume they’re doing the same thing.”

He also knows that his own experience can come in handy.

“I know there are other parents who are, like, ‘I don’t know how you could be a goalie parent,’ and then I have two of them,” Brian says. “I’m a goalie, and everything that’s going to happen to them has probably already happened to me. [I’m able] to give them nuggets of information on things that took me 49 years to learn, and they get it at an age where it makes a tremendous difference – to have that metal part of the game.”

“At the younger ages, it was more of, ‘Hey, these are the things that you might’ve considered doing,’ but now it’s to the stage where I try to ask them what they think,” Brian says. “It’s confirmation that they are learning and making those decisions on their own now. When I ask them those questions, the answers I get are thoughtful and usually pretty close to or 100% accurate.”

Having a goalie coach in the house can come in handy.

“Part of it is understanding what the person with the puck is going to do,” says Brian. “If you read the play right, you check off the things you know they can’t do. Maybe the puck comes across and you’re already in your butterfly, square to the shooter, and they crank it into your glove. I’ve always told these kids that if you can figure that out before the shooter does, you’ve won that battle. They may still score but it was because the shot was just better than what you were expecting.”

Looking ahead, Brian will remain a key voice in the heads of two of his favorite goaltenders: “A lot of parents just aren’t interested with their kids playing goal, and it didn’t bother me. To me, if I can give them the knowledge base so they can do well – and I always thought doing well makes it more fun – that’s the driving force, getting them to the point of being as good as they can be and to go out and have fun. That’s a victory.”