Catching up with legendary Willie O'Ree 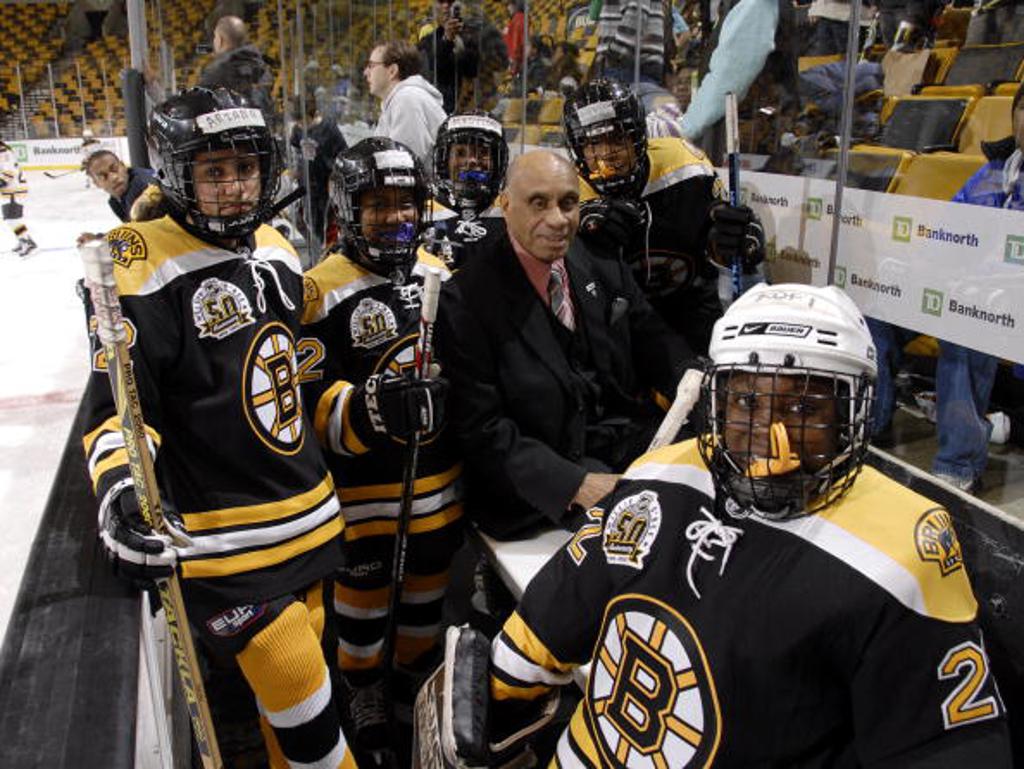 When Willie O’Ree stepped off a plane in Atlanta, en route to a baseball tryout with the Milwaukee Braves organization in 1956, he would have to use a separate restroom.

“The restrooms were white only and colored only,” says O’Ree, “and I went into the colored restroom.”

Within a few years, after deciding to focus on hockey and as a call-up from the Quebec Aces, O’Ree would become the first black player in the National Hockey League when he suited up for the Boston Bruins on a special Saturday night in Montreal during the days of a six-team NHL.

O’Ree had been to training camp with the Bruins by that time, and they needed a forward for the two-game set. Enter the 22-year-old O’Ree on Jan. 18, 1958.

“The Bruins called the Quebec Aces and said, ‘We want O’Ree to meet the Bruins in Montreal to play two games against the Montreal Canadiens,” he says. “So I go to Montreal and then I stepped on the ice.”

Though O’Ree’s presence in the lineup wasn’t celebrated and he went without a point or penalty, he did take away a keepsake – in addition to the thrill of playing in a Bruins-Canadiens game in front of family and friends in Montreal – for his efforts.

“They presented me with the score sheet of that game,” says O’Ree, who was born about 500 miles due west of Montreal in Fredericton, New Brunswick. “I have it framed in my office.”

“The restrooms were white only and colored only,” says O’Ree, “and I went into the colored restroom.” 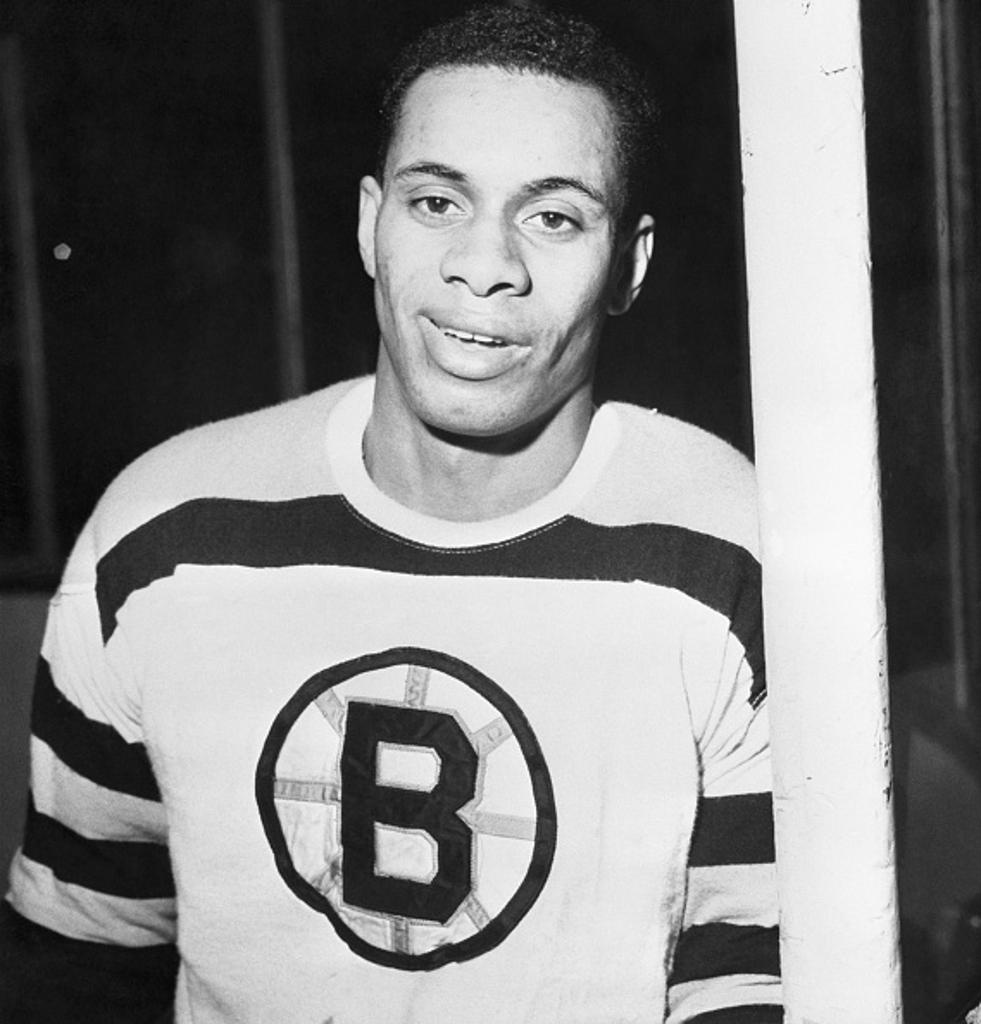 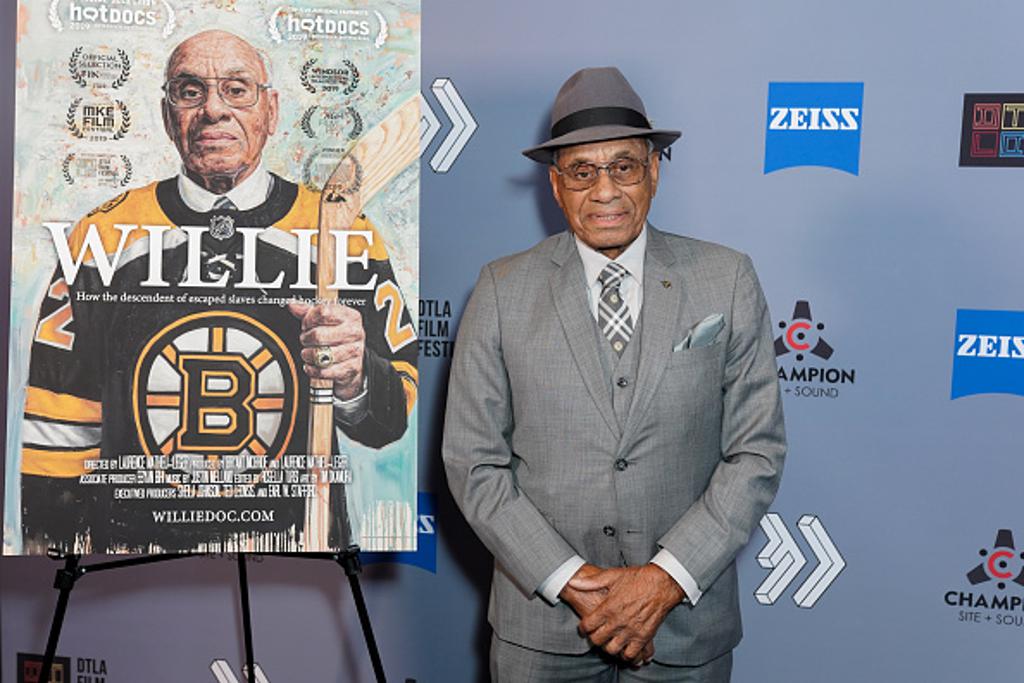 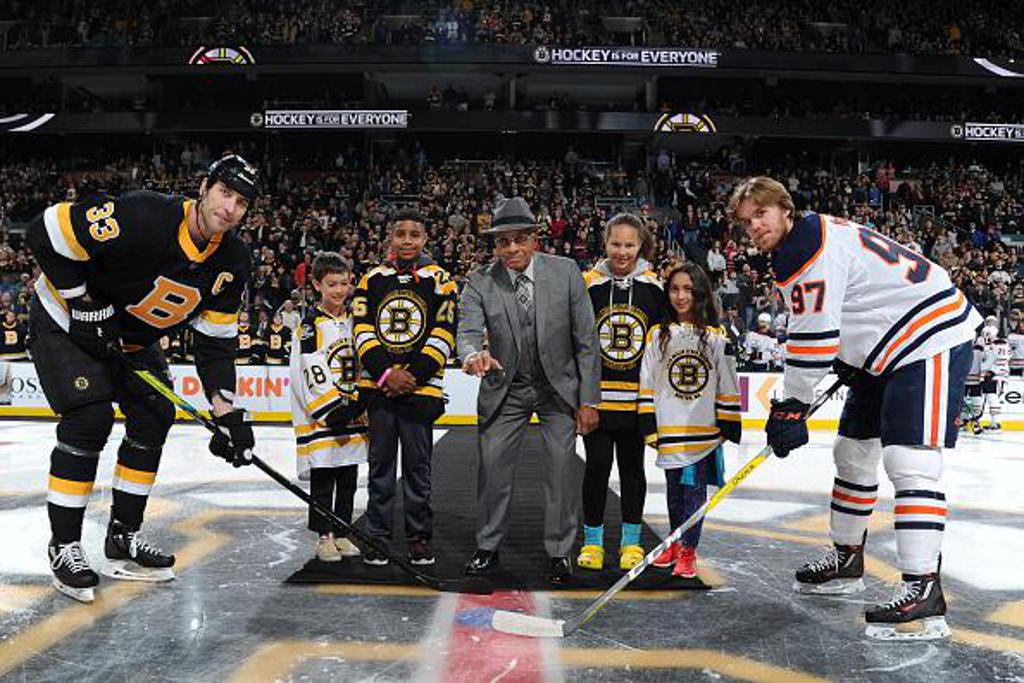 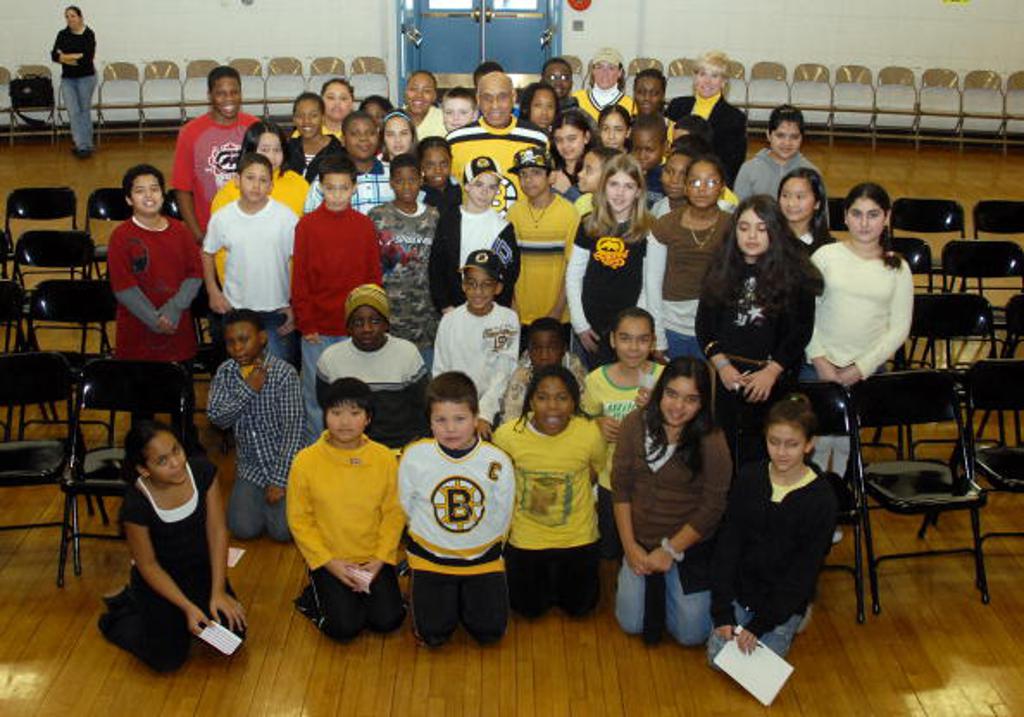 After the game in Boston, O’Ree went back to the Aces before playing another 43 games for the Bruins in 1960-61, the season during which he recorded another career milestone in January against Montreal: his first NHL goal.

“Horvath says, ‘Willie, if you ever get in on [Charlie] Hodge, keep the puck low,’” O’Ree recalls. “’He has a good glove hand, keep it away from the glove.’”

With the Bruins leading, 2-1, and O’Ree breaking down the left wing, longtime Bruins defenseman Leo Boivin hit him with a pass set for success.

“I didn’t even have to break stride,” says O’Ree. “I go around both defenseman, and now I’m in on Hodge, and I can hear this, ‘Willie, keep it low.’ So I go in and make a couple of moves on Hodge and it shoot the puck.”

Henri Richard closed the scoring a few minutes later, giving O’Ree not only his first goal but also a game-winner.

“And I remember the fans in the Garden gave me an over two-minute standing ovation,” O’Ree says. “It was a great evening.”

O’Ree would score four goals that season while enjoying his time in Boston.

“I never heard a bad word while I was there in Boston,” he says. “I lived in Roxbury and I stayed with my cousin. I would come in and practice and play games, and then go back to Roxbury. The fans were great.”

Willie’s remarkable journey in not one but two careers with the NHL is beautifully told in the documentary, Willie.  When Willie O’Ree skated onto the ice in a Boston Bruins uniform on January 18, 1958 he broke a barrier, the color barrier. Descended from escaped slaves, Willie became the first black player to skate in the National Hockey League, and his story should be as familiar to every young hockey player as the story of one of Willie’s heroes, Jackie Robinson.  It can be now.

Click here to read more about the critically acclaimed documentary about Willie O'Ree. 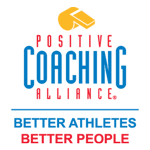 Positive Coaching Alliance has partnered with the filmmakers, the NHL, and education leaders to help promote social and emotional learning through meaningful conversations about Willie as part of the international Willie Impact Initiative.

Ask your athletes to:

Make a short video or write a short note about Willie’s impact on them.

Submit it to PCA here by March 1

Your athletes’ videos or notes could be selected to appear on the PCA website and social media, and/or to receive an award from the Boston Bruins.

In one of the most distinguished team honors, it was also recently announced that the Bruins would retire his No. 22 jersey. Only 11 jerseys have previously been retired by the franchise.

“The number of people over the two years that I played with there were great,” says O’Ree. “I was so happy and so proud to be a part of it. I just felt like a Bruin.”

It wasn’t long after that 1960-61 season, though, that he found out what so many NHL players find out: players are traded. And they’re not always the first to know.

“I was home about six weeks,” says O’Ree. “I’m sitting in the living room with my mum, and the phone rings. My mum answered the phone and she says, ‘Willie, it’s a reporter.’ I said hello. The words were. ‘Mr. O’Ree, what do you think about the trade?’”

O’Ree wondered aloud to which trade the reporter might be referring.

“You’ve been traded to the Montreal Canadiens,” O’Ree remembers the reporter saying.

Before making a return appearance in the NHL, O’Ree was again traded, this one with a sunny outlook.

O’Ree was told he’d done well for the Canadiens but the trade had been made, here’s some money for expenses … and his plane would be leaving soon. For Los Angeles.

Within hours of his arrival in Los Angeles, O’Ree had run into an old friend from his junior hockey days. 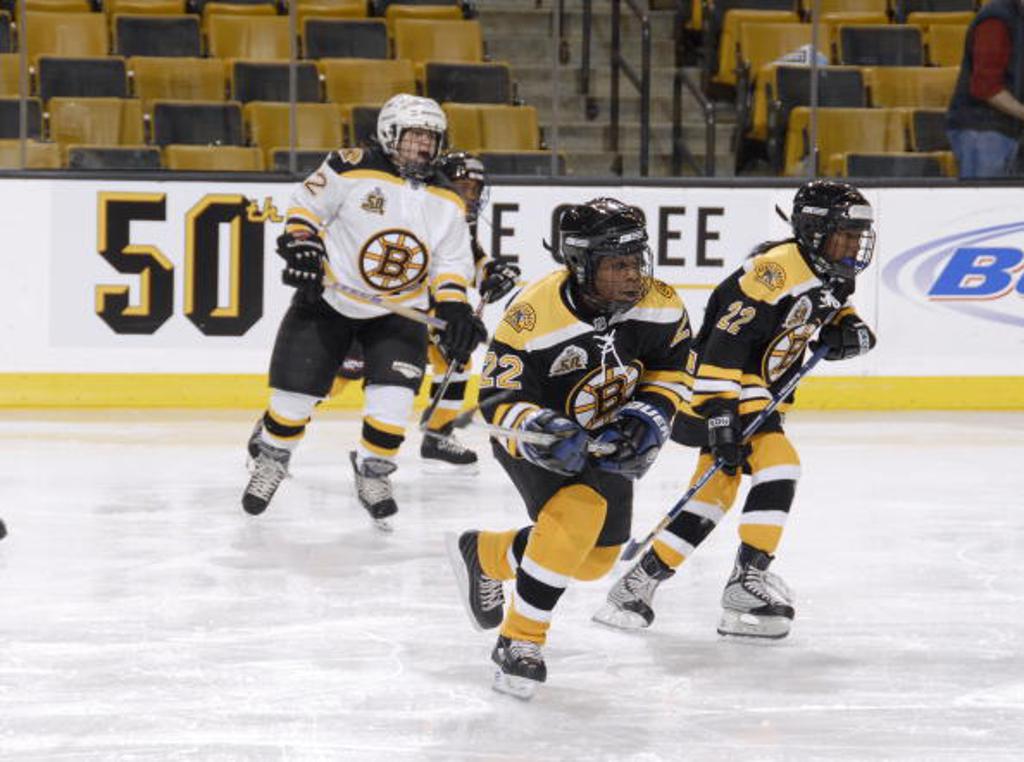 “Don’t judge a person by the color of the skin, but by the content of their character,” he says. “There’s a lot of truth to that. I have even had racial remarks and racial slurs directed toward me, at gas stations and in department stores. And one thing that I tell myself when I get up in the morning and look in the mirror, I don’t see a black man or a brown man, just a man.”

As trade days go, that’s not a bad day one.

O’Ree played six seasons for the Los Angeles Blades, then spent much of the rest of his career playing in San Diego, where he now resides. In sum, O’Ree played more than 750 games in the WHL, scoring more than 300 goals in the process, retiring in 1980.

Since 1998, he has worked for the NHL, and he’s received numerous awards for his efforts – including induction into the Hockey Hall of Fame in 2018.

“My job was to travel around, do on- an off-ice clinics, and I just had a great time with the kids,” he says of the early days of his work as the league’s diversity ambassador. “I tell them my story. Everything.” 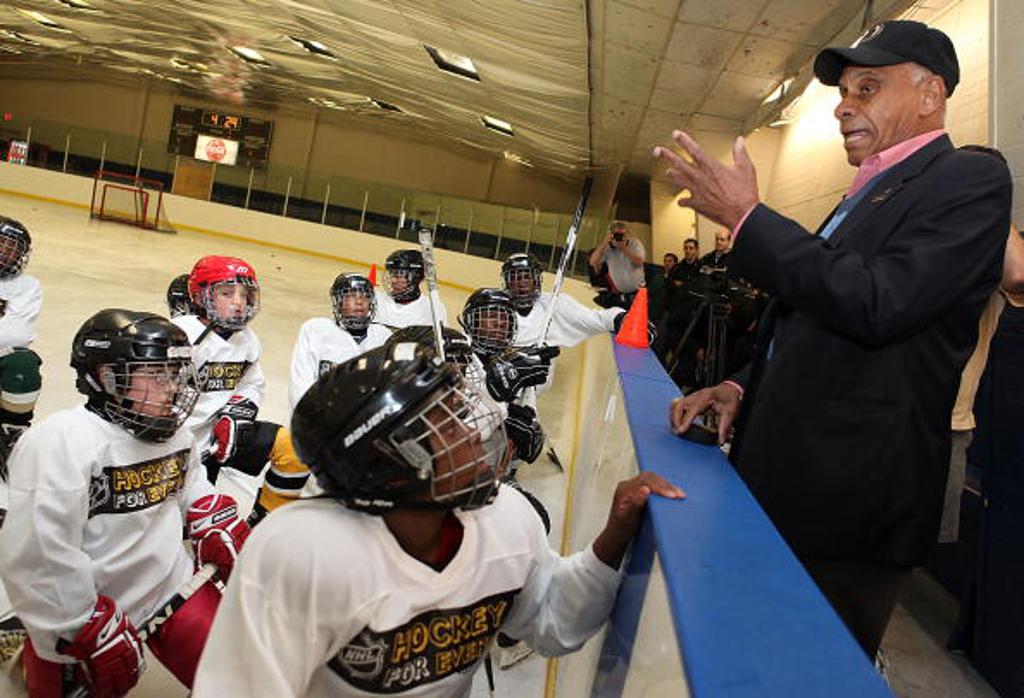 O’Ree’s investment continues to pay off, too.

“I still get phone calls and messages from boys and girls that I’ve talked to,” he says. “Some of them say, ‘Mr. O’Ree, I just want to let you know that some of the things you talked about in your presentation – about setting goals for yourself and feeling good about yourself and staying focused on what you want to do – I’m using those in my daily life.’ And that’s really nice to hear from a 13-year-old boy or girl.”

This past October, five days before the release of “Willie: The Game-Changing Story of the NHL's First Black Player,” O’Ree turned 85, and he’s still committed to growing the game and awareness.

“Oh, yeah,” says O’Ree. “It’s doing better. When I played, I was the only black player in the league. There [are now] role models for a lot of kids. I see in my travels that these boys and girls look up to these players. They might think they could become a Jarome Iginla. There still is a race problem, it’s not going away overnight and it’s going to take a lot of time.”

O’Ree, a man who once stepped from the possibility of a baseball tryout into a segregated restroom, and the same man whose Bruins jersey – the one he wore fewer than 50 games – will be raised to the rafters in Boston, does repeat some wise words.

“Don’t judge a person by the color of the skin, but by the content of their character,” he says. “There’s a lot of truth to that. I have even had racial remarks and racial slurs directed toward me, at gas stations and in department stores. And one thing that I tell myself when I get up in the morning and look in the mirror, I don’t see a black man or a brown man, just a man.”