Catching up with Millis native and current BC Eagle, Matt Boldy 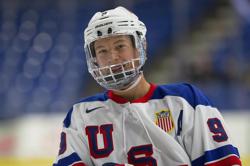 Hockey has already taken Millis native Matt Boldy as far away from home as Russia and British Columbia, but the Boston College sophomore has recently returned from what might be his most successful hockey trip to date.

As of Jan. 5, this time in Edmonton, Alberta, Boldy became the proud new owner of an IIHF World Junior Championship gold medal – thanks in large part to his five goals and two assists in seven games with some of his best friends in the world.

And though he’s officially back on his home turf, he hasn’t yet brought the gold medal back to Millis.

“It's in my dorm room right now,” Boldy said. “I'll bring it home once I get the chance to head there, but [it’s] just hanging out right now.”

Because he’s spent so much time away over the past few years, hanging out in Massachusetts remains a luxury for Boldy. Though he had his eye on playing at The Heights since he was a kid, Boldy made the difficult decision to leave Millis for the National Team Development Program in Michigan at the age of 16.

“As a 16-year-old, you're obviously really young,” recalled Boldy. “It was tough, obviously. It was tough on my mom. I'm definitely a mama's boy. But she knew that it was kind what we needed to do to get to the next level. And the support she gave me was awesome.”

Boldy was quick to credit USA Hockey’s NTDP for making him the player that was chosen in the first round of the 2019 NHL Entry Draft by the Minnesota Wild. Named the Player of the game at the 2018 USA Hockey All-American Prospects Game, Boldy still ranks No. 8 all-time on the NTDP’s scoring list – he’s behind only Jack Hughes, Clayton Keller, Phil Kessel, Cole Caulfield, Patrick Kane, Jeremy Bracco and Auston Matthews – with 157 points. His 95 career assists ranks fifth all-time at the program.

Umm. Guys. I think Paul Fenton was right about Matt Boldy, too. pic.twitter.com/R2DdH1mKTv

“That's kind of where I was able to take really big steps to the next level and improve my game, [to] bring it to somewhere it wasn't before,” he said. “But a lot of it is just the connections I've made, the people I've met and the friends I'm going to have forever.”

Much the same can be said for Boldy’s teammates at the WJC, who became only the fifth team in United States history to win gold. After losing their first game at the tournament, against Russia during a game in which BC teammate Spencer Knight was pulled, Boldy and his teammate ran the table.

Team USA would outscore their next five opponents, 31-5, until closing out the tournament with a shutout – with Knight in net, no less – over rival Canada.

“Yeah, it's obviously a lot of pressure, but, if you ask anyone, that's the place you want to be,” Boldy said. “That's the team you want to play. We were all super excited about it. We were ready for the challenge. The group we got to do it with was awesome. You don't really get that many chances to go play on an international level with some of your best friends. Being able to win it with the group of guys we had made it even more special.”

Just as nerve-rattling as entering the final, Team USA needed a 4-3 win over Finland in the semifinal, a game that featured a timely Boldy shot-block – not typically the big forward’s forte.

“[Shot-blocking’s] not something I'm super elite at,” he laughed. “The one against Finland kind of just happened. My instincts just took over. But I was happy to do it for the guys. The way I play is pretty offensive, really creative, being able to use my body to make plays, protect the puck and make plays from there – which I think is really important, especially at the next level.”

“It starts with having fun. That’s the biggest thing. All of your success and getting better is going to come from having fun." 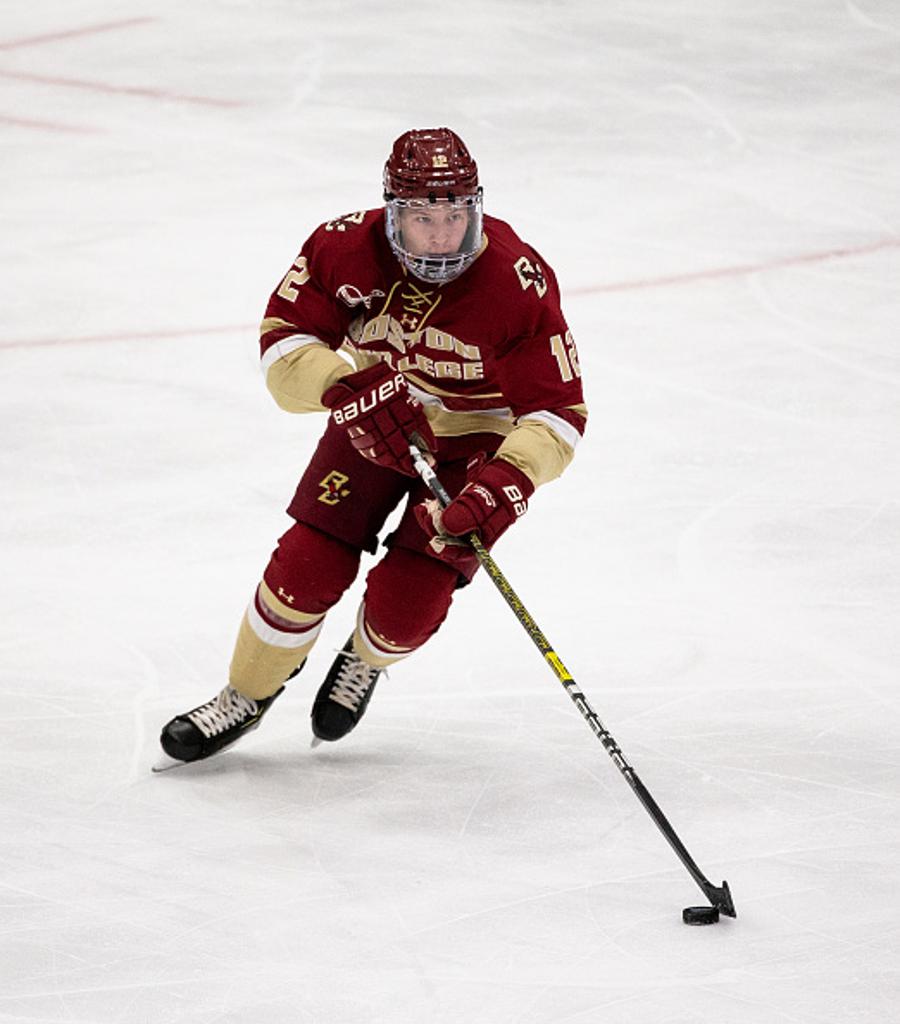 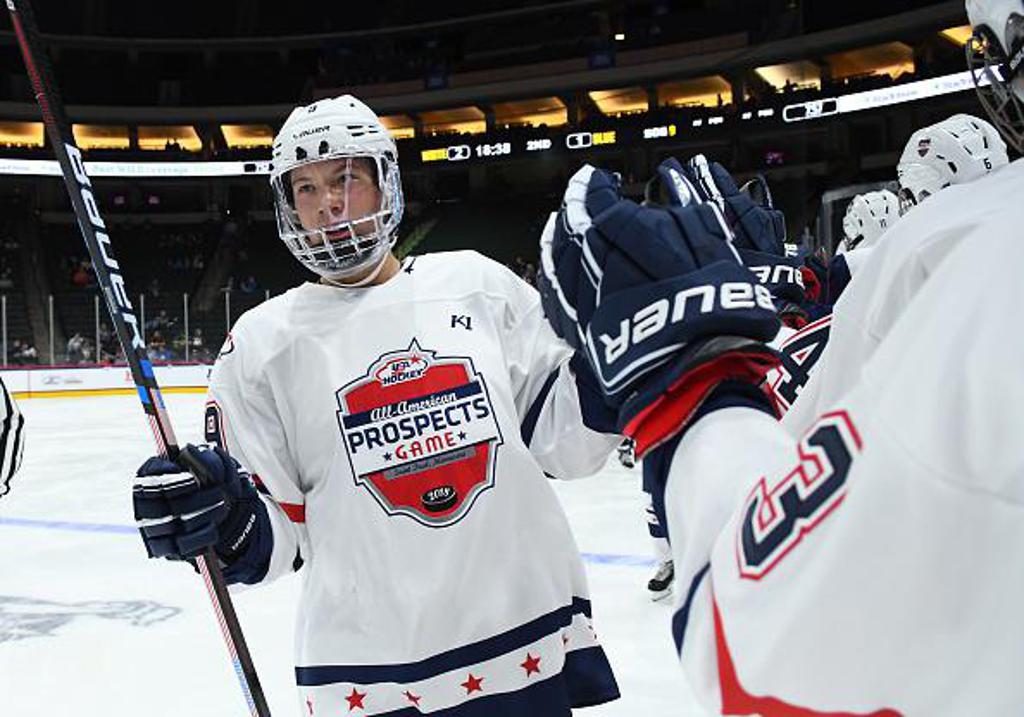 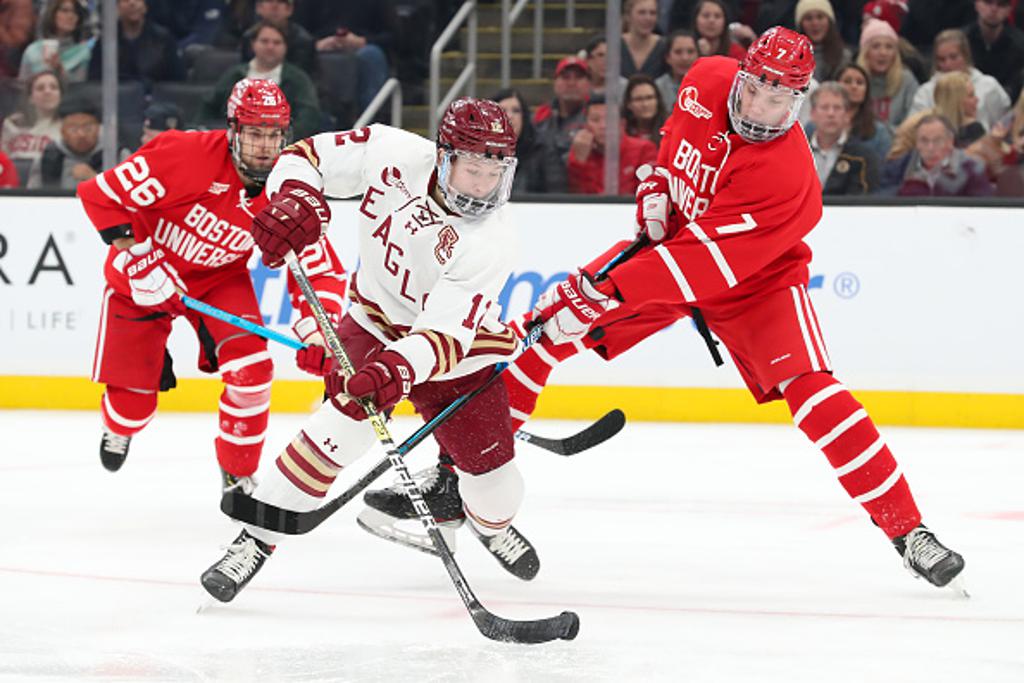 For Boldy, who also scored a memorable and more on-brand between-the-legs WJC goal against the Czech Republic, the next level would be the NHL, though he’s not quite ready to turn his attention to professional hockey. There’s the matter of the Eagles, currently ranked No. 1 in the country.

“I'm a little more focused now here at BC and trying to do something special with the group here,” he said. “It's been incredible. I grew up coming to the BC games, was a fan my whole childhood, [and], obviously, [it is] an unbelievable program. It was kind of where I wanted to be. Being able to play here has been awesome.”

In his first season in Newton, the 6-foot-2 Boldy finished fifth on the team in scoring, and through his five games this season he has six points, which puts him near the team lead early in the season.

“Being able to kind of come back and have my parents and family friends be able to come to the games and support me – obviously it stinks this year with no fans – but just being close to home and to see my mom and dad and brother and sisters is awesome,” Boldy said. “We look really good. We have a little bit of a ways to go, but we have a really good team. We have some high hopes for the season and we're all really looking forward to seeing what we can do."

His advice for future players?

"It starts with having fun," reminds Boldy. "That's the biggest thing. All of your success and getting better is going to come from having fun. The more fun it is, the more you're going to want to be better at it. That's my biggest thing, still to this day is just go out there and have fun. It's a sport and it's something that you love. That's my biggest piece of advice."