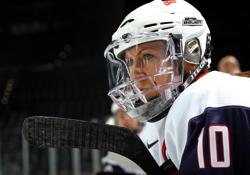 Within minutes of Meghan Duggan posting, “It’s been one of the greatest honors of my life …” and announcing her retirement on social media, a cascade of congratulations came in from across the country. Former teammates, fellow Olympians, sponsors, Mass Hockey, USA Hockey, hockey parents, fans and players. In the days that followed, the picked-up gems from a lifetime in hockey continued to reveal themselves as connections from youth hockey and prep school hockey in Massachusetts, college hockey in Wisconsin and more than a decade on the U.S. Women’s National team reached out.

“Overwhelming and exciting, but all in a good way,” says Duggan, a two-time Olympic captain whose lasting Team USA memory is a gold medal in 2018, which was a measure of revenge after a heartbreaking OT loss that resulted in silver four years earlier. “I’ve been doing this for 30 years, and that’s a lot of different relationships, so it’s been really fun and humbling for me to connect with everybody again.”

‘It’s time’
How does an athlete know when it’s time to officially retire from competition? For Duggan, who grew up in Danvers and played at Cushing before wining three national titles and a Patty Kazmaier Memorial Award at Wisconsin, the decision fits. Between those accolades and all of the international medals with Team USA, it is, simply, one of this country’s most distinguished careers.

“I think for me, the way I have operated in my personal and professional life, and throughout my career, is to act on gut,” Duggan says. “And what my heart and mind are telling me is that this was the right decision for me. It’s one that I’m really at peace with and excited about, and obviously one that my wife and I talk about a lot. And I’m excited about it prepared for whatever is next.”

While Duggan may be retiring from playing, she isn’t likely to get too far away from the game.

“When I think about the role that hockey has played in my life, I reflect on the people it has brought into my life,” says Duggan. “It’s my wife, our son, my in-laws, and all the great people I’ve met along the way. It’s just another reason why hockey is such an instrumental part of my life. I don’t plan on separating my life from hockey. I’ve done it so long that it’s really ingrained in me.”

Duggan will, however, miss all that comes from playing the sport with her fellow elite athletes and lifelong friends.

“Kacey Bellamy was a bridesmaid at my wedding, we’ve been to three Olympics together and we played against each other in high school in the Cushing-Berkshire days,” she says. “Hilary Knight, we played against each other at prep school, went to Wisconsin together and played on the national team for 10-plus years together. I’m just so thankful for all of them. I think the thing I’ll miss the most is just being with my teammates.” 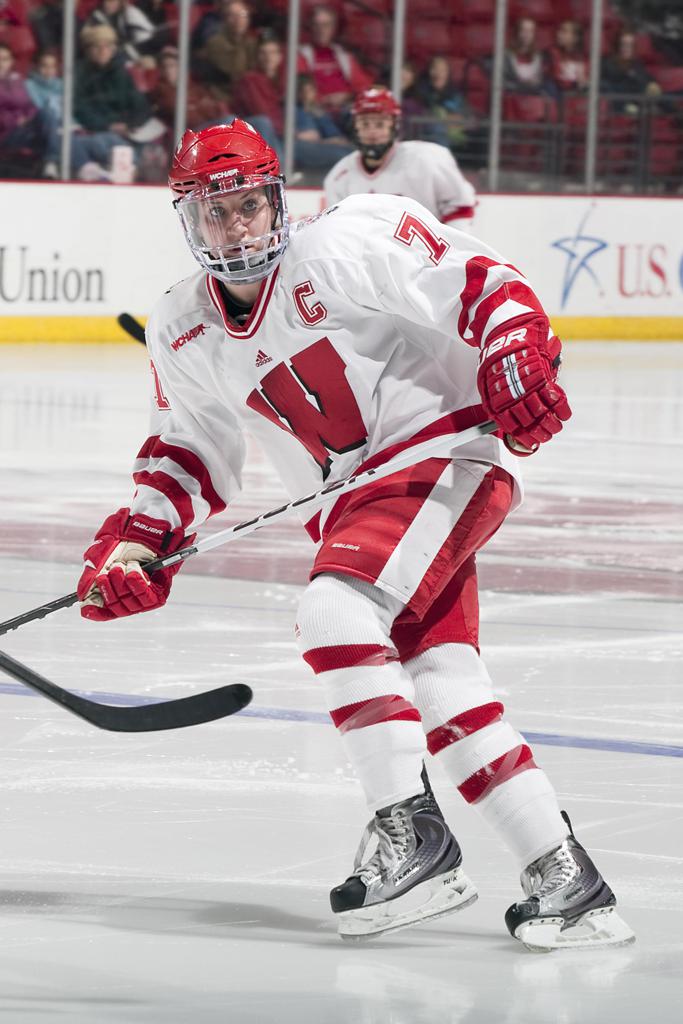 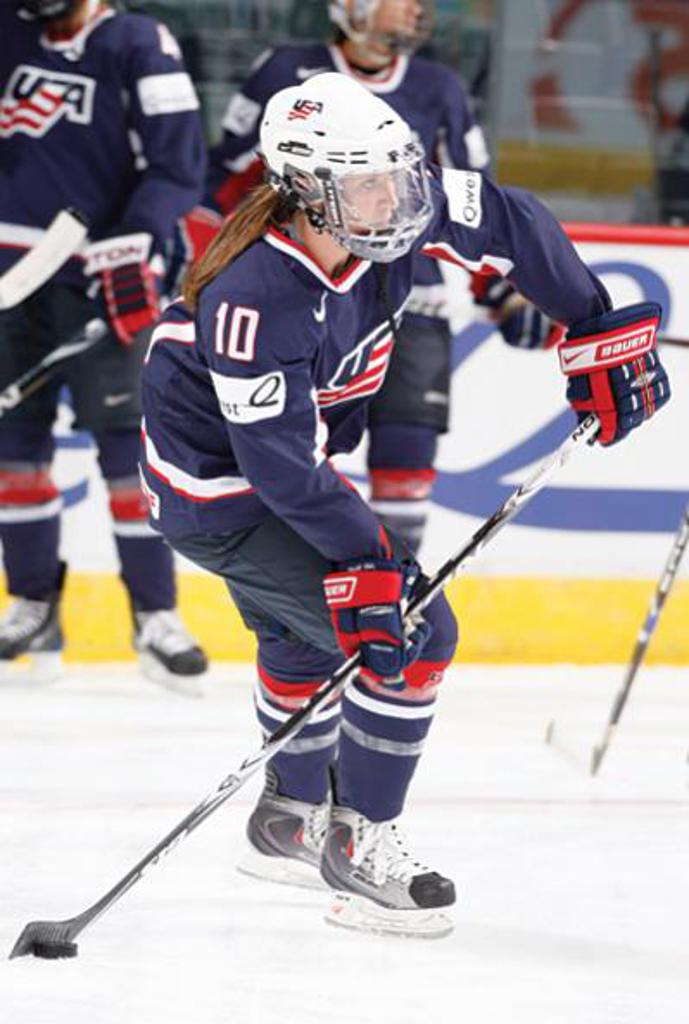 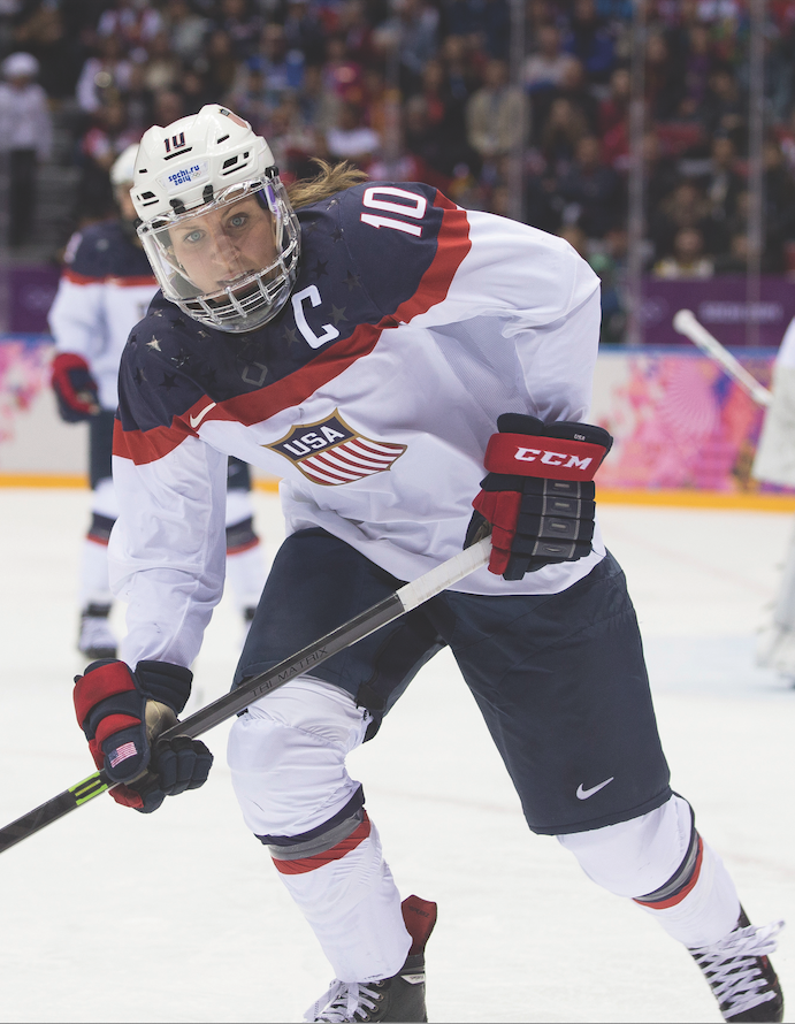 A Leader of Leaders
When you’re a Team USA captain, you’re likely part of a team full of captains. And yet Duggan captained Team USA twice. It is no small feat, and it’s not one she takes lightly.

“It is and has been one of the greatest honors of my life,” says Duggan. “It’s something that I take so much pride in. I spent the bulk of my career trying to become better and grow some as a leader.”

For young players wondering what it takes to lead the best, yes, it helps to be a very good player, but Duggan’s approach is worth considering for any player.

“Leadership can be really challenging and difficult, and that’s OK,” she says. “Sometimes, leaders have to make hard decisions. But, at the same time, you have to recognize the importance of the group, and you have to connect with every player on your team – regardless of whether they’re the same type of person as you are or they’re different. Finding ways to pull everyone together, even when people go about things in a different manner is really important. As a leader, it’s your responsibility to connect everybody in that way.”

Highs and Lows
When you play at the highest level, the highs mean capturing the attention of a nation during yet another Canada-USA final, and the lows mean losing in that same matchup in overtime four years prior, standing next to teammates in tears as the other anthem is played. In 2018, there were also tears, but for very different reasons.

“The most challenging thing about my career was the overtime loss in the gold medal game in the 2014 Olympics,” says Duggan. “The pure joy that we felt in 2018 and the time that we had to celebrate with each other and our families, to me, is like a moment frozen in time that I’ll never forget. Aside from my wedding day and my birth of my son, it’s definitely one of the greatest moments of my life.” 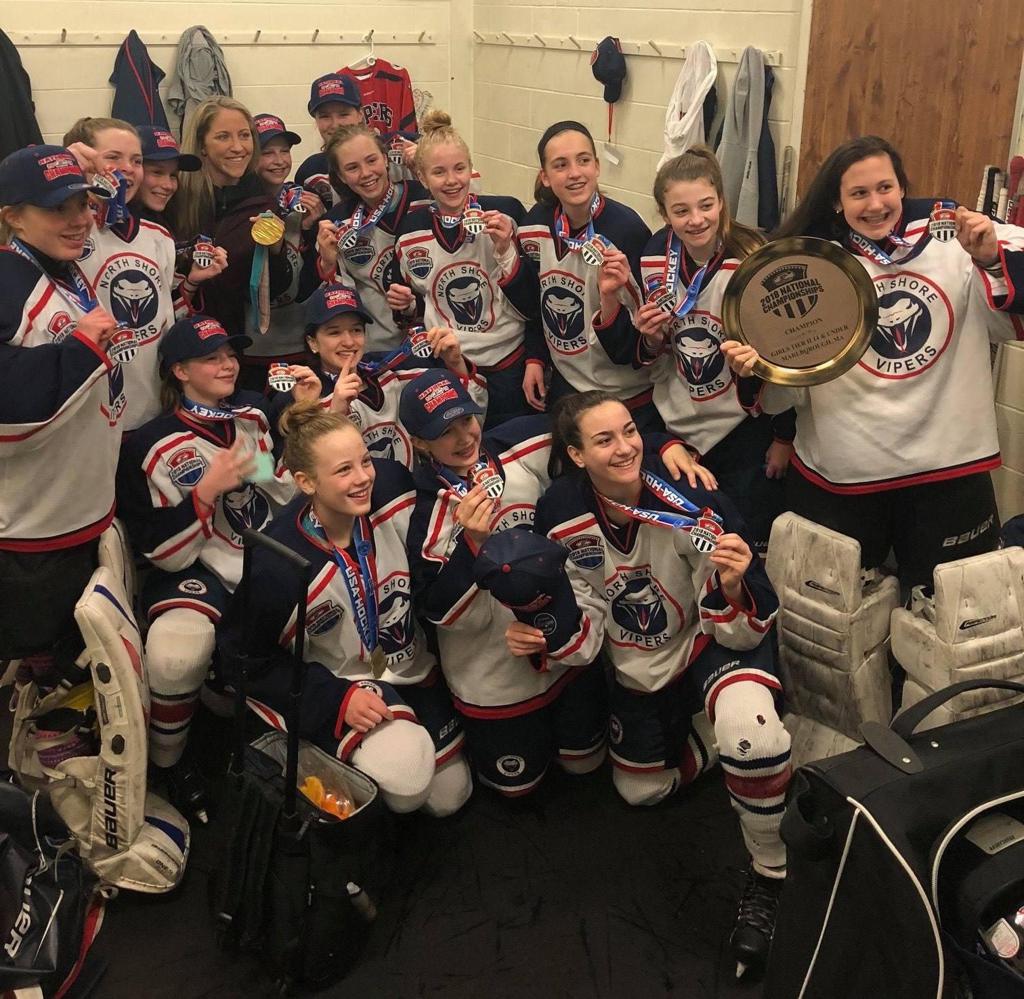 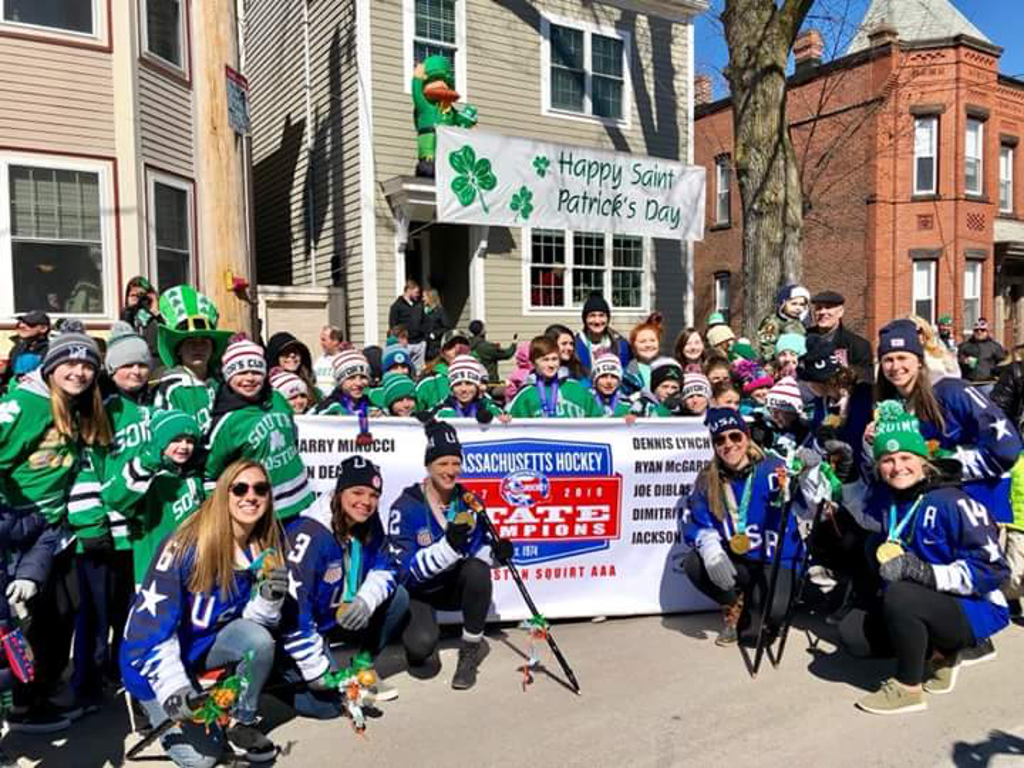 “I’ve had so many incredible experiences that the game will always have such a special place in my heart. I obviously continue wanting to make a impact in hockey, and it certainly will be on the other side of the glass at this point. I’ve been so fortunate to play the sport for so long and to have so many wonderful experiences, and it certainly is something I will continue to be involved in.” 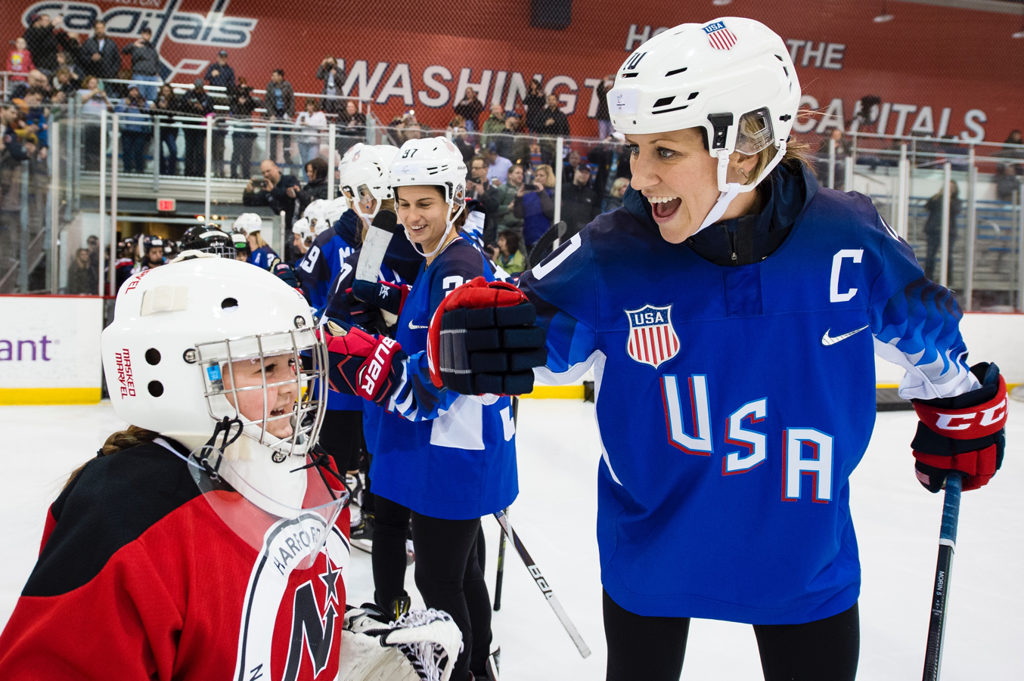 Duggan, who serves as a member on the USA Hockey Board of Directors, on the Women’s Sports Foundation Board of Trustees and is part of the NHL’s Player Inclusion Committee, is no stranger to leaving lasting messages on youth hockey players, and that isn’t likely to change.

“The biggest thing I try to tell young kids in hockey is, one, it always has to be fun for you,” she says. “I’ve been fortunate that I felt that way my whole career, even during the tough times. But I also remind them that hockey is a huge game of mistakes and we make those all the time — and I have made some costly ones in my career. It’s about finding ways to get through that and learning that you will never be perfect. I just encourage the kids that it’s OK to make mistakes.”

For her son, who was born in February 2019, there will be similar words of wisdom when the time comes.

“When you talk about how you want to raise your kids, and how my career has gone, I think the biggest thing I would try to teach him is that you have to respect whatever you do,” says Duggan. “And I’m proud of myself as somebody who tried to always respect the game and the people in it. I’ve always tried to respect the game by working hard and giving it the best version of myself. So, if he could take that with him in anything that he does, I think that’s a win.”

Unlike in hockey, where the game so rarely feels like it offers an abundance of time to think through the options and make a decision in anything other than a split second, Duggan, who now resides in Connecticut, plans to make the most of this time.

“Some of the best advice I’ve received in the last couple days from some mentors I really look up to has been not to rush in to anything – that I have earned the right to take some time and reflect and think about it,” she says. “I’m a new mom and I’m looking forward to the adventure and challenges that it brings. He’s definitely a handful. He’s not walking yet, but he’s crawling around and pulling on everything. I’m looking forward to spending time with my family, and I obviously want to continue to have an impact in hockey. Figuring out what that looks like is exciting.”