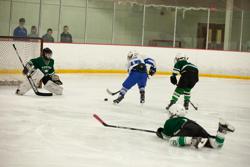 Being talented isn’t easy. Being a good player isn’t easy. Being a great player is even more difficult, and being an elite player – one who could, say, wear a U-S-A jersey in the Olympics someday – would seem nearly impossible. But it does happen, obviously, and few are more acquainted with the journey than Boston College associate head coach Courtney Kennedy.

Kennedy, a Woburn native and two-time Olympian herself, has since 2007 played a key role in recruiting players to the Heights, where BC has become a national power, sending players to play for Team USA at IIHF World Championships and at the Olympics – including five who won gold at the 2018 PyeongChang Games.

In short, Kennedy, whose players are generally some of the most talented in the country before setting foot in Newton, has seen what it means to be good, great, elite and everything in between.

Elite is when great takes a regular shift.

“I think the consistency of great really puts you in the elite category,” says Kennedy. “Let’s say you have a 45-second shift and you have eight of those a period. In how many of those are you accountable in every zone at every moment?”

Kennedy, who will insist to this day she would not be outworked on the ice, also subscribes to the theory that hard work not only will pay off, but is in and of itself a payoff. Talent alone isn’t enough. 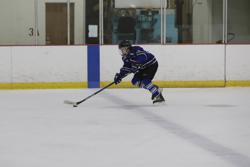 “It’s not,” she says. “I’ve seen so much talent. The separator I think is: Are you willing to put that work in? Every day? It’s not easy. Kids are waking up at 6 a.m., every morning, to train. Before school. That’s hard. There are a lot of things that go into it. But all I know is that if you want to be the best, if you want to be elite, there is a way, but, if you don’t have the hard work, I don’t know.”

Six of Boston College’s eight incoming players for 2020-21 have at least some Team USA experience, so elite players are a way of life at BC, and the thinking component of the game does always come into play.

“To become elite, I find it super difficult because it takes that mental side,” Kennedy says. “There might be a kid who has a lot of skill, like shooting the puck really hard, but hockey IQ might be suspect. I’m glad you can shoot the puck like a rocket, but, if you can’t get into position, who cares? Can you anticipate? Do you know what’s happening? Do you know what you’re doing?”

Helping players answer some of those questions is up to coaches. For them, the idea is to create an environment for talent to flourish – where OK can become good, good can become great and great can become elite.

“You create that landscape,” says Kennedy. “I don’t ask you to come in more talented. I ask you to come in and work hard. You can handle that. It might be hard the first few days, and I’ll deal with that. I’ll give you the wiggle room because I want you to learn. And then you get to see what you can do. You can see where you thrive when you have the confidence of a coach. I respect every kid on my team — it doesn’t matter how good you are. You’re a human being and you showed up. I want you to work hard. That’s what your job is. If the kids do the little things right, and get to the point of nailing it, you’ll see the elite stuff happen if you’re patient and you work hard.” 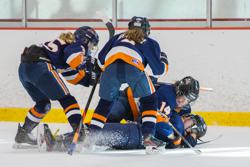 And it wouldn’t hurt if, every once in a while, even the elite player heard a nice compliment from a coach — after something like that backcheck-pickpocket-instant-outlet-pass-finish-at-the-othe-end play.

“Even at practice, sometimes I have to turn around, like, ‘What, are you kidding me?’” Kennedy laughs. “And I have to go tell the kid because I don’t think they know it. And the kid looks at me like I had 50 heads. I bet that kid was never told that.”

From a tactical standpoint, Kennedy points to less structured hockey as a means to experimenting and building the kind of confidence that clears a path for growth.

“It’s good for the best player to have to be with a kid who isn’t that good,” Kennedy says. “Because maybe they learn how to be a better human that day. And you teach them how to respect somebody who isn’t as good a hockey player.”

Consider, too, that so many youth hockey volunteers, coaches, teammates – even the elite ones relative to their ages – are part of the experience that can keep young players in the game. Or not. The hockey machine has chewed up its fair share of young players before anyone even knows what they could become.

“When you’re eight, I don’t even know what your hobbies are or what you’re into, but it’s probably not thinking about being the best hockey player,” says Kennedy. “It’s, like, ‘I hope the ice cream truck is coming today.’ And as a coach it’s kind a hard because you’re trying to change the world and make a kid better. That’s why I wish they were fewer championships and you had the best coaches at U8.”

By the time they’re getting closer to their own hockey destinations, what we should all be thinking about is whether they still enjoy the game. In Kennedy’s case, surrounded by kids at the higher end of talent and potential, the role, as it could be at nearly every level, is to bring a player to the next step.

“Some of these kids, maybe they’re elite with an Olympic-level shot, but they’re not the greatest skater,” she says. “So what you’re hoping for in your time with them is that maybe their game catches up in those other departments. Maybe you become a better stickhandler, and that’s my job. My job is to take what’s elite and keep it there, and maybe I push you to be quicker or to shoot quicker. The more elite pieces you have to your game, the closer you’re getting to wearing your country’s sweater.”