John Leonard eager to hit play on his season 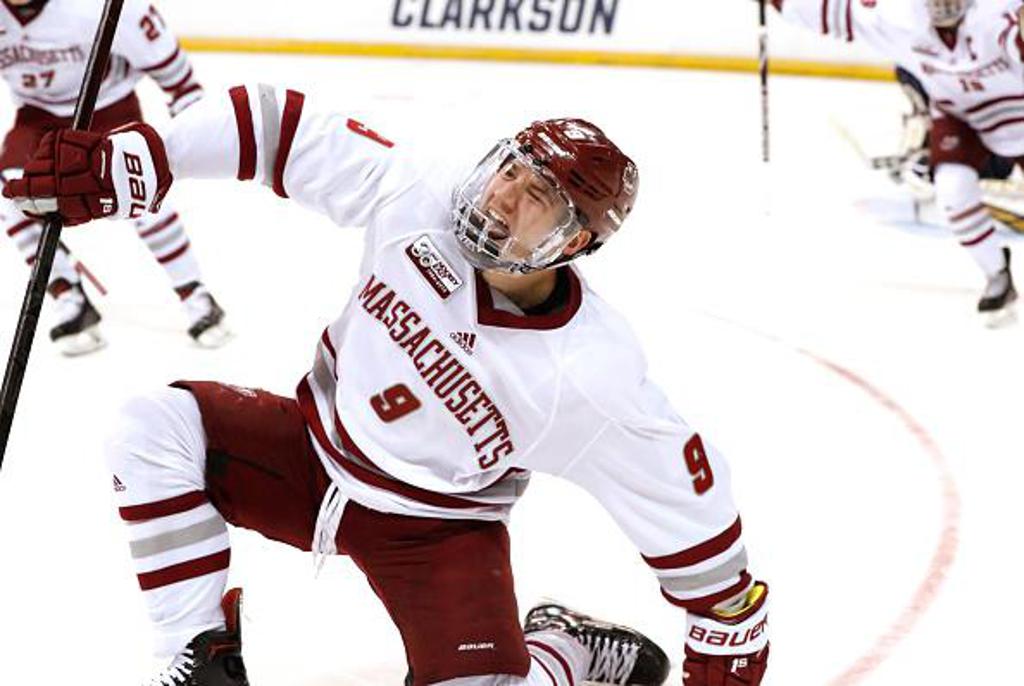 At a time when uncertainty governs what order there is to these days, John Leonard, the University of Massachusetts star forward from Amherst who recently signed a two-year entry-level contract with the San Jose Sharks, is caught in a particularly strange limbo.

While so many adjust to new and often significantly more challenging normals, Leonard’s before-and-after the Covid-19 pandemic will coincide with the abrupt end of his stellar college career and the beginning, eventually, of what he hopes to be a professional hockey career.

But one thing is clear: Leonard will take this pause, one that hit so suddenly via Twitter, when a UMass teammate saw Hockey East’s postseason had been cancelled, as an early start on his offseason training.

“Just a day or two before that, we found out no fans would be going to the games, and we were talking about how it was playoff hockey, and that we could bring our own energy, and then the next day it shuts down,” says Leonard. “It was a very hard time for all of us, and definitely not the best way to end the year.”

Only a few weeks ago, Leonard, with a 27-goal, Hobey Baker Top Ten finalist season behind him, was looking ahead to playing Northeastern in those Hockey East playoffs. Within a couple of days, staying at home had become a way of life.

Now and for the foreseeable future, Leonard’s world consists of time with his family, punctuated by basement gym workouts, an occasional bike ride or run, and shooting pucks in the driveway.

Lots of shooting in the driveway, in fact.

"I love scoring goals, and I love shooting the puck and so it’s something I’m always working on all the time." 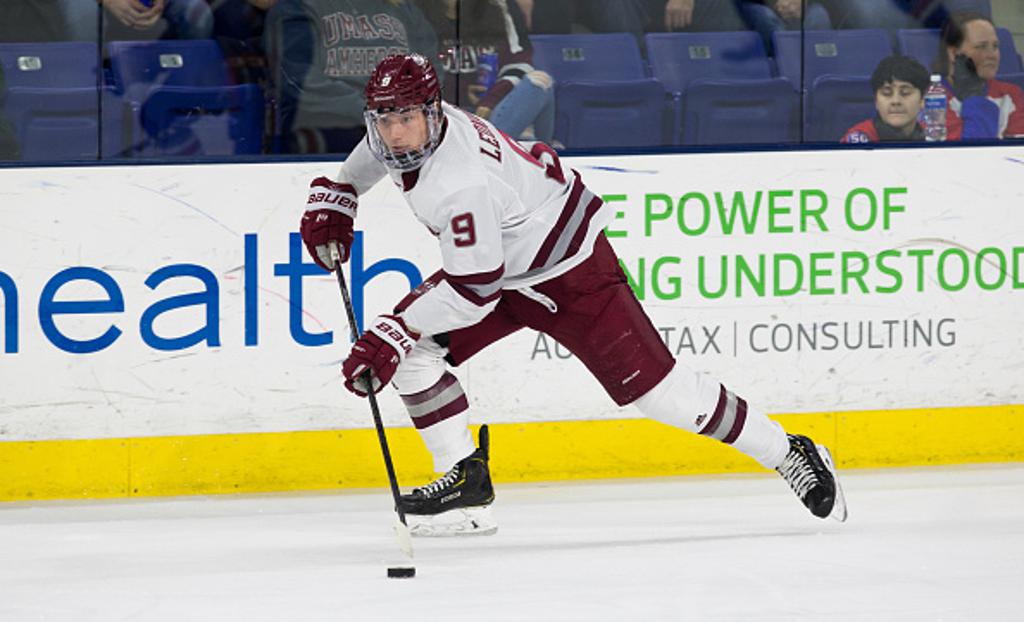 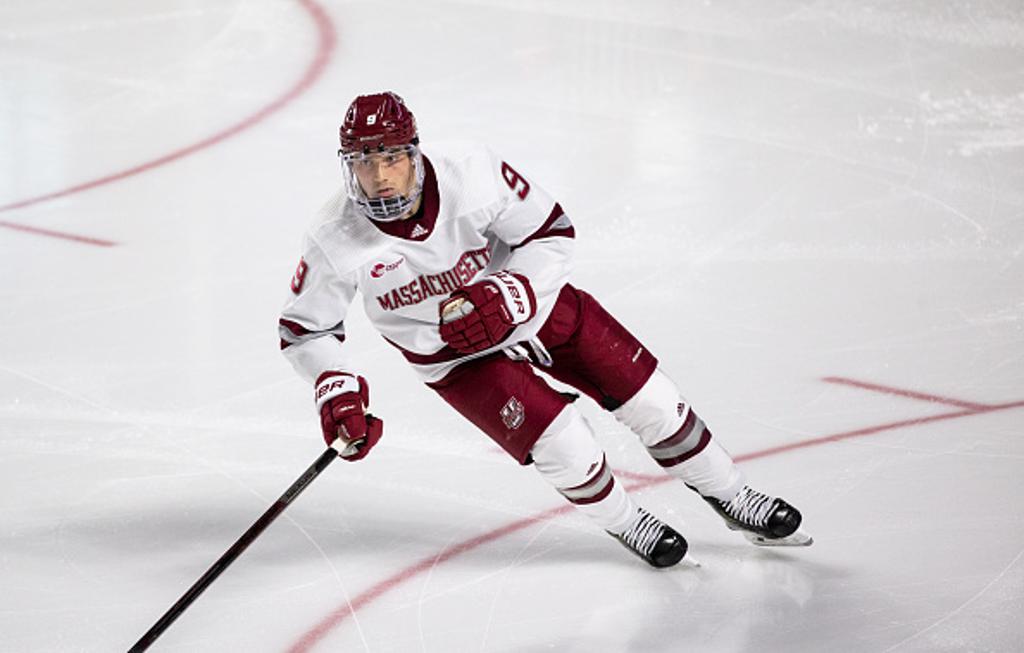 “Everyone likes to score goals and be that guy, so I just try to be that to the best of my ability,” Leonard says. “I’ve been very fortunate to play with a bunch of great players who have helped me with that. I love scoring goals, and I love shooting the puck and so it’s something I’m always working on all the time.”

This offseason, Leonard, occasionally with his younger brother when they’re not finding new ways to pass the time indoors, might be out in the driveway for as long as an hour or two at a time, shooting pucks and playing games like h-o-r-s-e with shots on net.

“I love being outside, out in the fresh air, just staying out in the driveway and shooting pucks,” says Leonard. “I have a little shooter tutor outside, so I shoot on that a bunch.”

When it comes to indoor workouts, it’s about the basement gym. His set-up – a squat rack with a bar to convert to a bench press, some dumbbells here and a medicine ball there – isn’t exactly what he became used to at UMass, but Leonard will have to make it work for now.

“Just standard stuff, but it gets the job done,” he says. “As an athlete, you really do have to get to the gym to work out, stay in shape, put on some muscle and bulk up. Obviously, now, that’s hard to do, but I’m going to do everything I can to stay in shape and get stronger to the best of my ability with the time that I have.”

Making the most of that time will likely be guided by his own scouting report.

“I like to think I’m a skilled forward who likes to shoot the puck, likes making plays and having the puck on his stick, and I take pride in all three areas of the ice,” says Leonard. “I think the biggest improvement for me could be my skating ability and the fluidity of my stride. So that’s the area I will be working on throughout the summer.”

Leonard will also look forward to a time he can get back to working out, on and off the ice, with fellow UMass hockey alum and former Boston Bruins forward Frank Vatrano.

“Frank’s a good buddy of mine and I see him every day in the summer,” he says. “We work out and skate together, and he’s a guy I look up to. It’s awesome being able to train with him and see the things he does because he knows what it takes to be successful at the next level. He’s an awesome guy to have as a mentor.”

Both, of course, are also examples that Western Massachusetts is producing very good hockey players.

UMass made for a natural fit for Leonard, who last year helped lead the Minutemen to their first Frozen Four appearance with a team of four point-per-game players, including himself and Cale Makar.

“It was something I didn’t want to pass up,” Leonard says of attending UMass. “It just felt right. It definitely helped that they had a lot of good players, a great staff and a great recruiting class, and the facilities are top-notch.”

While the horizon remains a little blurry for Leonard, signing with the Sharks, who drafted him No. 182 overall in the 2018 Entry Draft, does represent an unforgettable milestone.

“Yeah that was a cool moment for me,” he says. “It’s obviously a dream come true to get that opportunity.”

And, yes, his phone blew up.

These are the days for catching up with friends and family, and Leonard tries to see the positive in all of this as he finishes up the UMass semester on Zoom and enjoys as much of the stay-at-home time as he can.

“We’re all stuck in the house all day,” he says of his brother, one of his two sisters and his parents. “And we do find some interesting ways to kill time – board games and all that kind of stuff that a lot of other people are doing right now – just spending some good, quality family time together. We’re all just going to keep doing the things we’re doing, staying inside and staying safe, to the best of our ability.”

And, yet, as soon as anyone will let him, the Massachusetts native with the new connection to California, will hit the play button again on his hockey career and see where it takes him.

“The first day that I can get back onto the ice,” Leonard says, “I’ll be there for sure.” 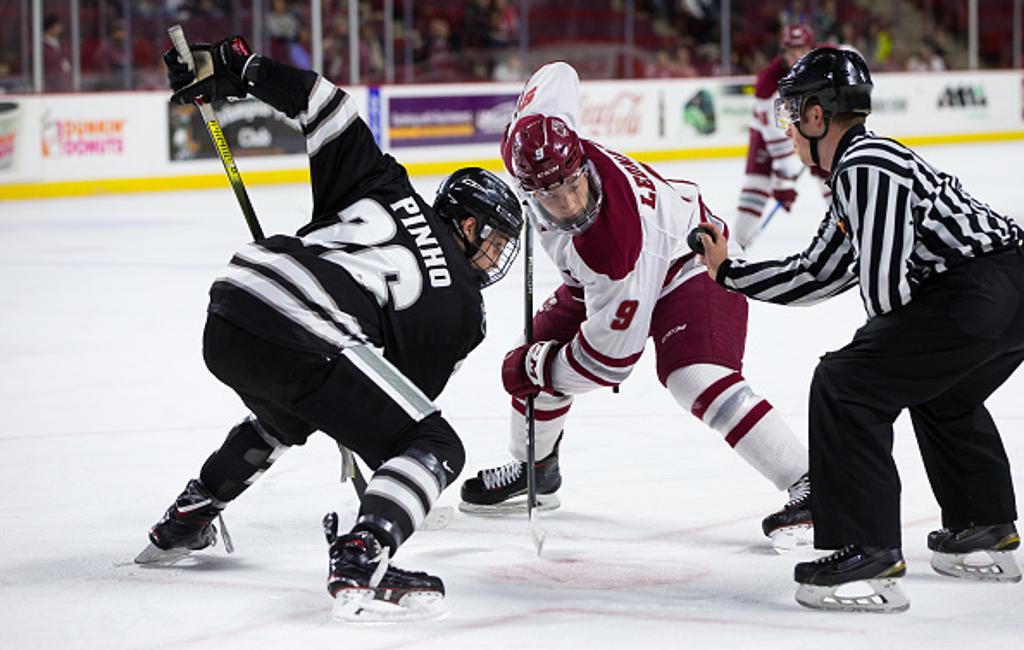 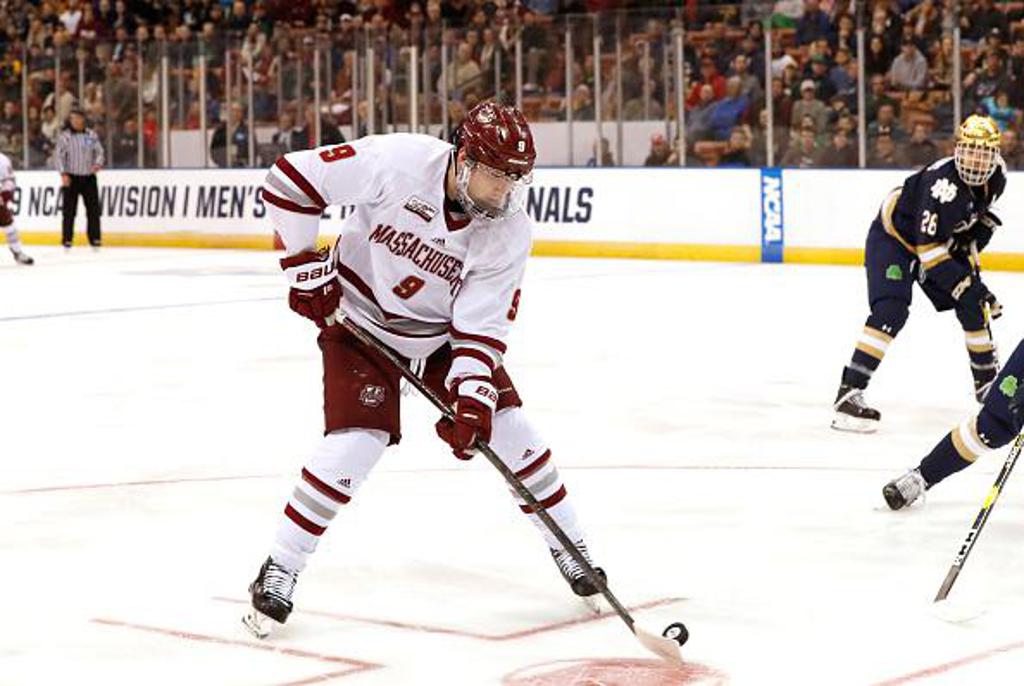 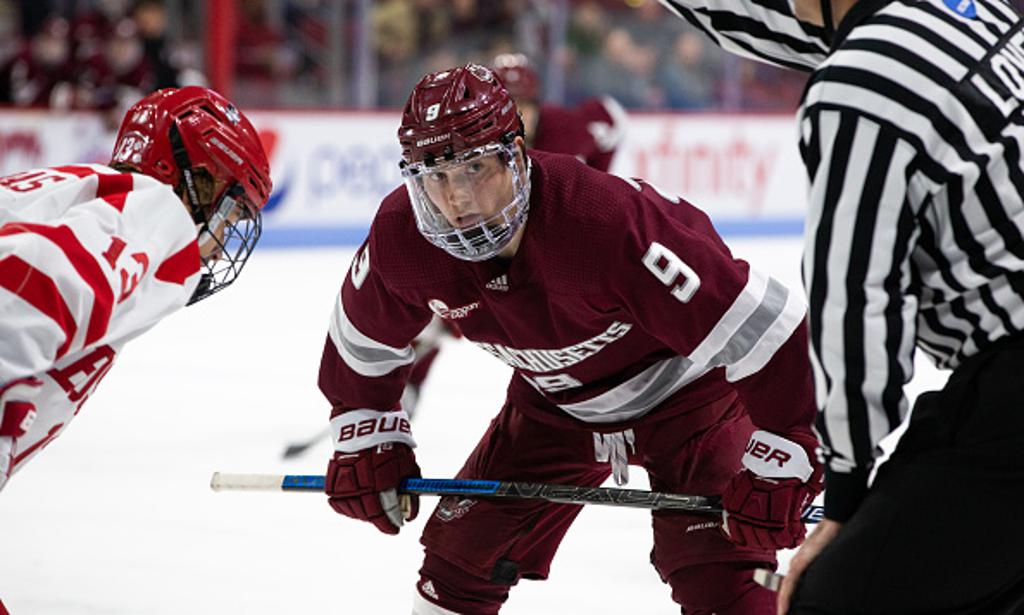