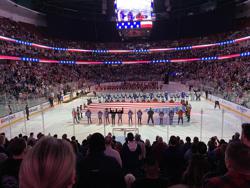 When it came to looking for someone to help represent Massachusetts at the recent Game On: Empowering Women in Hockey Together summit in Anaheim, Calif., the first of its kind held by USA Hockey, Mass Hockey president Bob Joyce could hardly have come up with a better choice than Karla Aguirre.

Not only is Aguirre a hockey mom of four, but she’s also a longtime youth hockey volunteer with her local program in Waltham, and also with Assabet Valley, where her daughter Karly played. Oh, and she’s also working with Mass Hockey, too, on the state tournament side.

When Joyce extended the offer for the two-day event full of breakout sessions with more than 70 like-minded women’s hockey leaders representing 33 states, Aguirre jumped at the chance.

The summit included larger sessions as well as breakouts over the course of six or seven hours during each of the two days – with topics ranging from data-driven statistical shares to building confidence in young female players.

Perhaps as important as the official sessions were the times spent before, after and between those sessions.

“We ended up having all these conversations about what’s going on and what people are doing,” says Aguirre. “It was amazing to see that the issues in Anaheim are the same issues that we have in Massachusetts, which are the same issues that Texas is running into. It’s all girls’ and women’s hockey, and we’re in the same boat. We all think that we’re kind of alone in our area, but, in the grand scheme of things, we’re all a team and we’re all going through this together.”

Aguirre left impressed by the numbers of girls’ programs springing up around the country.

“It was pretty amazing,” she says. “It blew my mind. [Participants] from North Dakota, Alaska, Maryland, and they’re all great, and we will stay in touch and bounce ideas off each other. We need to get in touch to throw out ideas and figure out who has ones we can do together.” 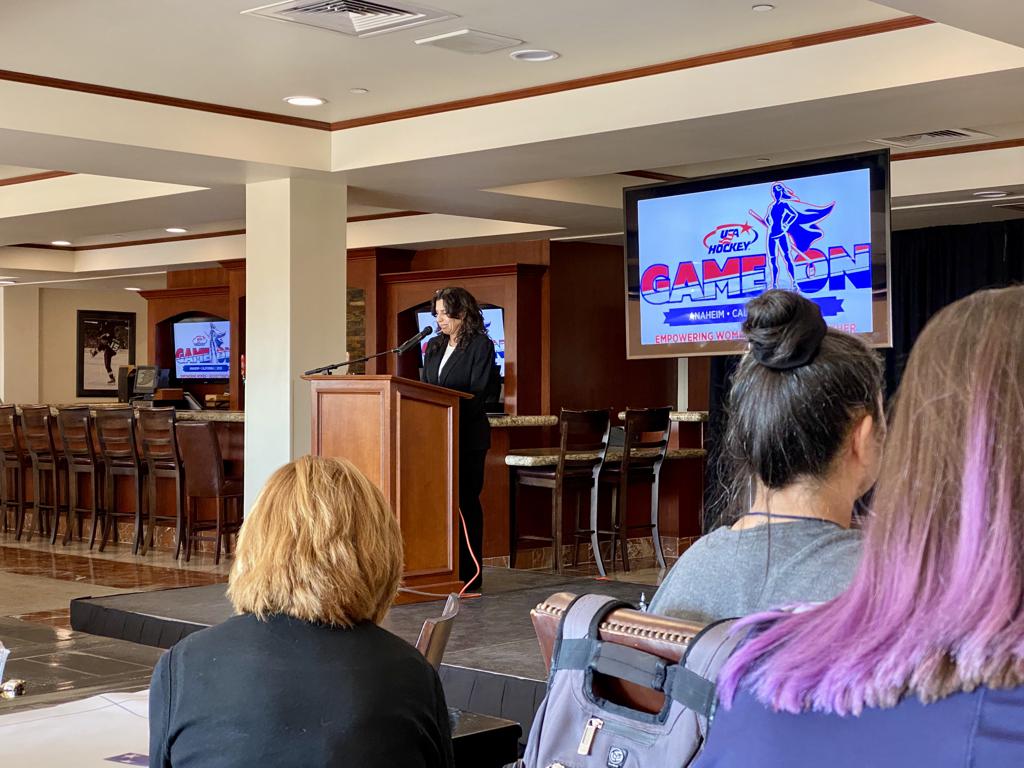 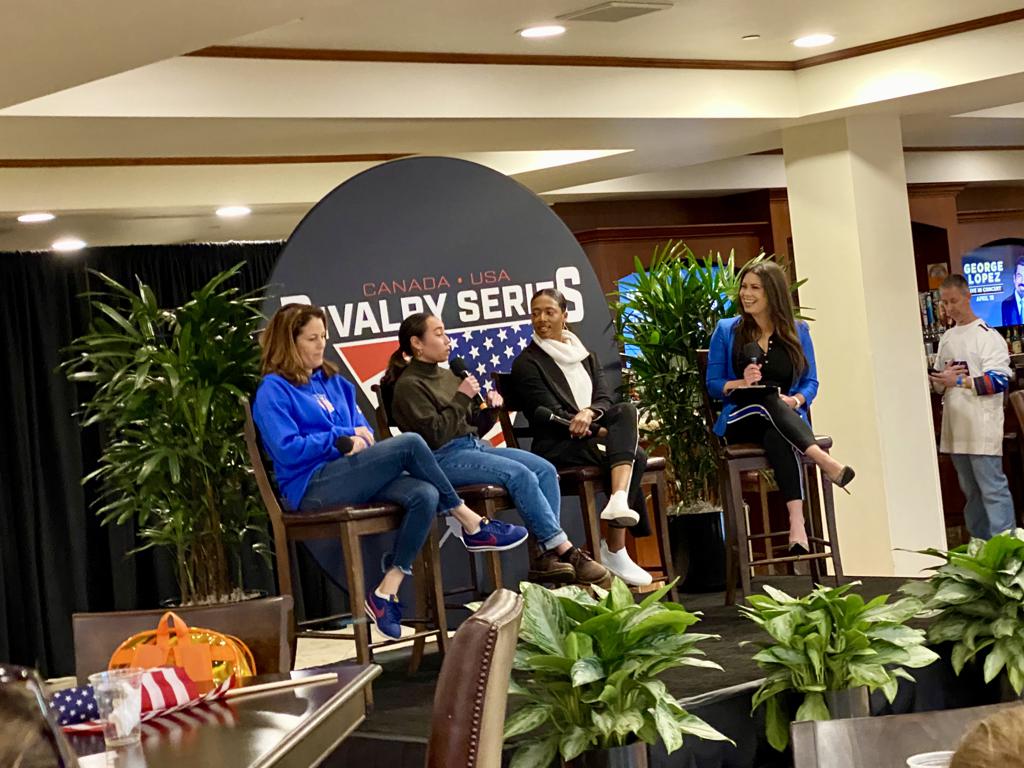 As a pioneer in girls’ and women’s hockey – from youth programs across the state to early college programs – Massachusetts has built a strong foundation in the game.

“I think we’re definitely in a good spot,” says Aguirre. “We have so many males and females who are interested in [volunteering]. That’s definitely a plus. When we throw out ideas, people will be more receptive. We’re not trying to make people take a medicine they don’t want.”

In her time with Assabet Valley, Aguirre would have been working with one of the more successful youth sports programs in the country and certainly appreciates the game from that perspective, too.

“It’s such a cool thing that they built,” she says. “Just to be with those girls and see all of them wanting the same goals, to be part of a team, to be something, and to show that they’re just as strong. I want to empower girls.”

In some regards, those players continue to inspire as they advance in their hockey careers.

“I’ve met so many girls, and some that I keep in touch with even now that they’re in college,” says Aguirre. “I watch their games if they’re local, and I cheer them on, congratulate them for their first goals and things like that.”

Among Aguirre’s takeaways: The more giving back, the better.

“I think we do really need a larger female presence, just so the [youth] girls can see them more,” she says. “It seems like we’re all having the same issue – that not enough of these girls are getting back into the game to coach other girls or to come and help with something like skills clinics. Or just to have someone to answer questions.”

The younger, the better, too.

“We need them to kind of jump in and help out and teach the new generation,” says Aguirre. “We need those younger former players to continue that presence, not just leave it up to the older ones. At some point, the older ones aren’t going to be available to do it.”

Aguirre points out that playing hockey can be a long game for women just as it typically is thought of for men.

“Girls need those role models,” she says. “They’re not all going to go to the Olympics. Young players need to know that a player still plays hockey – and she went to college, and now she’s a nurse or a CEO or a police officer.” 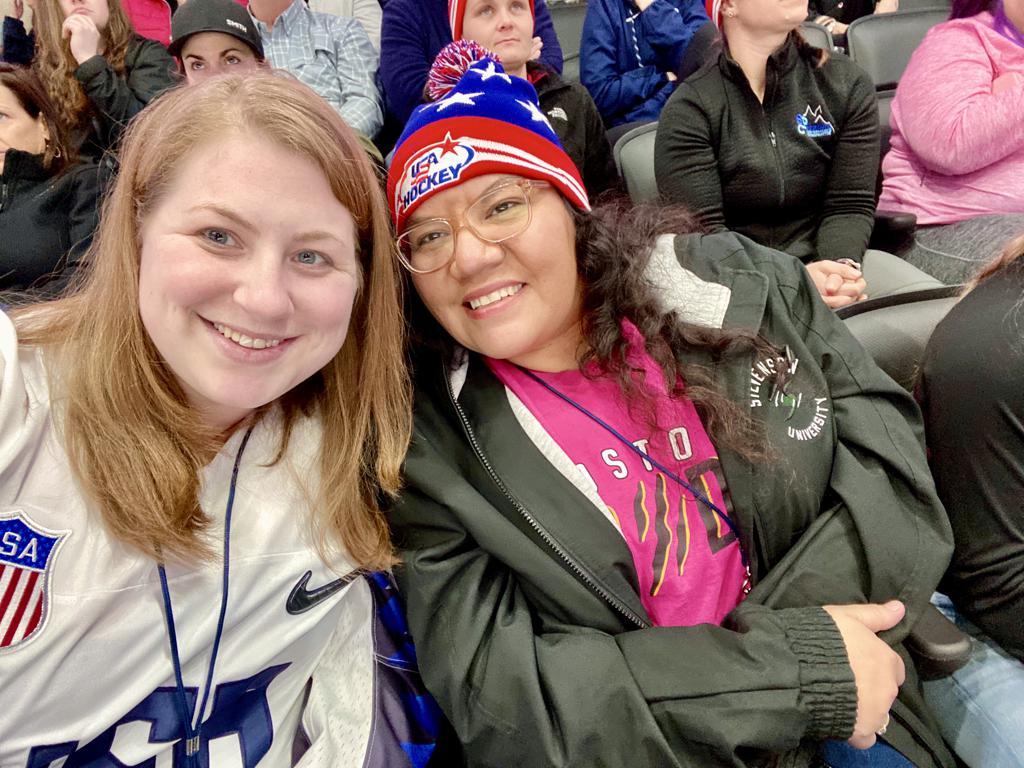 “The great thing about this was seeing that so many people have a love for the game. We learned a lot of statistics about girls ages 12 to 18 and it was kind of amazing to know what their issues are, and it gives you a little insight into how to teach them or how to keep them engaged. So I think the biggest takeaway is that there are subtle differences we have to recognize. And we just have to adjust, especially with this new generation. The new generation as a whole is so different, and we have to adjust to that, and we also have to adjust to the subtle differences between girls and boys who are playing hockey.”