‘One of the most important positions’

Falmouth Youth Hockey is putting an emphasis on goalie growth

Look around and you’re not going to find many training grounds better suited to a life between the pipes than a family basement as the youngest of six. And that’s where Peter LaMontagne found himself often as a kid, squarely at the bull’s-eye in a shooting gallery.

Today, he’s also at the center of an entirely different goalie role that came about almost as organically.

Falmouth Youth Hockey, which has the advantage of owning its own rink, also found itself with the disadvantage of losing goaltenders in recent years.

Paul Moore, Mass Hockey’s Coach-in-Chief and also the town’s longtime high school boys’ coach, had been particularly struck by the thinning goaltender ranks. So, against the backdrop of USA Hockey’s 51 in 30 initiative that hadn’t quite made its way into local programs, the former Clippers star decided to start a grassroots program in Falmouth.

Moore tapped LaMontagne, whose young son in the program was eager to play goal as his father has for more than 30 years, to lead this new charge as the program’s Goaltending Development Coordinator.

“And he’s been killing it,” Moore says. “You have to pay attention to goalies, because they will leave your program. We, as a sport, are notorious for loop-and-shoot drills and teeing off on goalies’ foreheads to warm them up, and for not giving them the proper attention that they need. We wanted somebody to work with our goalies, and we were just going to get it off the ground and do it. So we put a point person in charge of it and that’s Pete.”

Now in his second year as the GDC, LaMontagne, who’s on the ice about 15 hours a week as a coach, has been turning what had become a weakness into a strength for Falmouth Youth Hockey.

For LaMontagne, it’s a labor of love.

“My old man was involved, and I’m happy to be involved,” says LaMontagne, whose father, Jerry, was a fixture in Sandwich and Cape Cod Canal Youth Hockey throughout the 1980s. “I saw what he did, and the amount of time I got to spend with him at the hockey rink, and I thought, ‘You know what, absolutely. I’ll volunteer my time for hockey and goaltending,’ two things I’m passionate about. And what we’re doing is pretty awesome.”

What they’re doing in Falmouth is trying to build a goaltending pipeline from the ground up, beginning with the youngest ages, right up through the select programs and, eventually, into high school and beyond.

“Your goalie is one of the most important positions on your team,” says LaMontagne. “If you ignore it, you’re doing a disservice to your team and your hockey program. That’s the biggest thing to me.”

LaMontagne played out during his first year in mites, but had the opportunity to play up a year in net (his older brother played goaltender, too), so he put on the pads and did not look back. Even today, in addition to the time he spends on the ice volunteering, he plays goal in men’s league.

There’s no such thing as too many goaltenders in LaMontagne’s life, and he’s set about bringing as many into the fold, some of whom had left the program previously, in Falmouth as possible.

You’ve heard of Try Hockey for Free, and LaMontagne has a twist on the theme: Try Goalie for Free, which is run multiple times a year. After all, this is about mass production – or Mass production, if you prefer. Gone are the days of picking a goalie by default. The more the merrier. And even in an era where the fingerprints of specialization are unfortunately all over youth sports, the seemingly most specialized position is being democratized through this initiative. 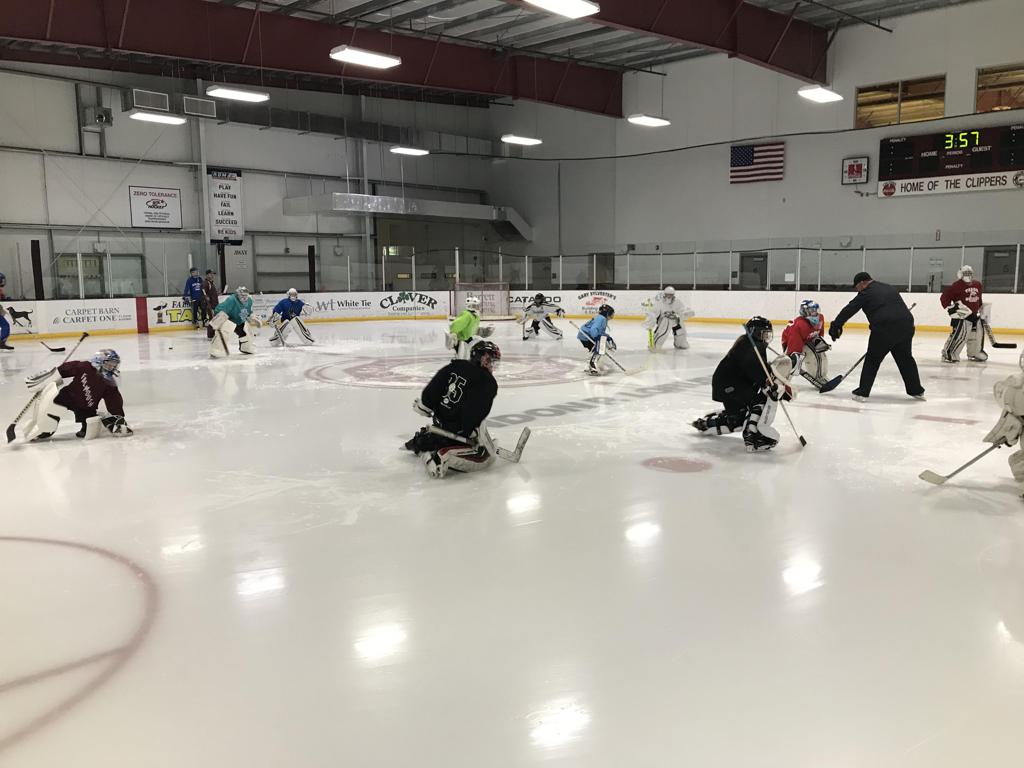 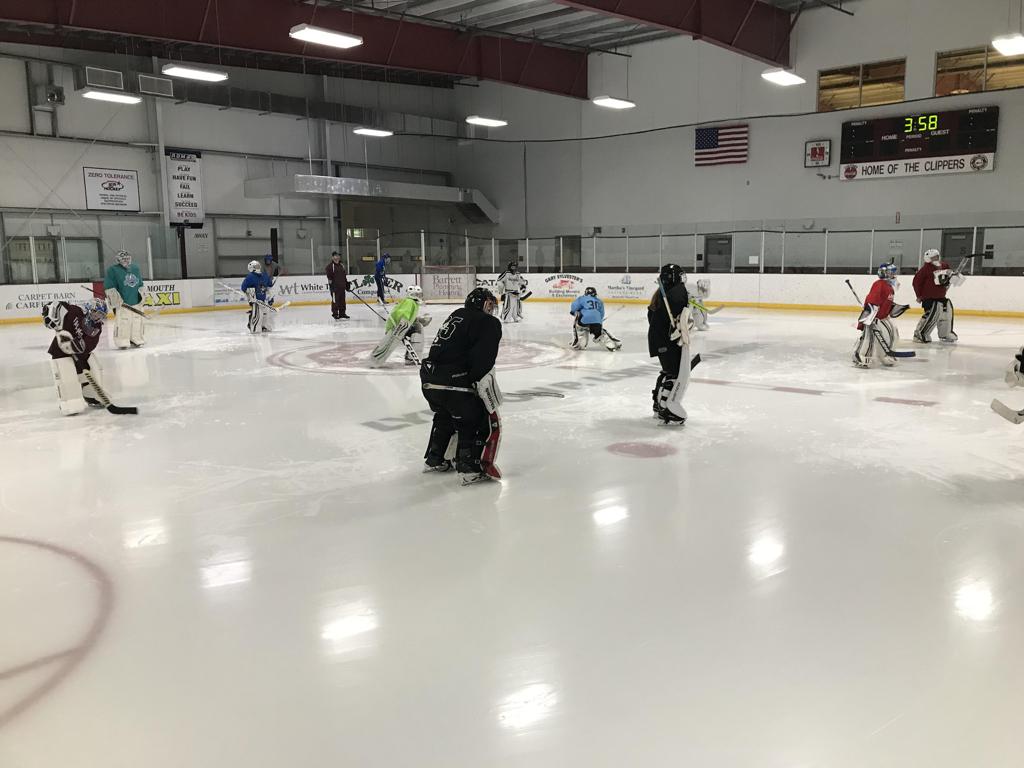 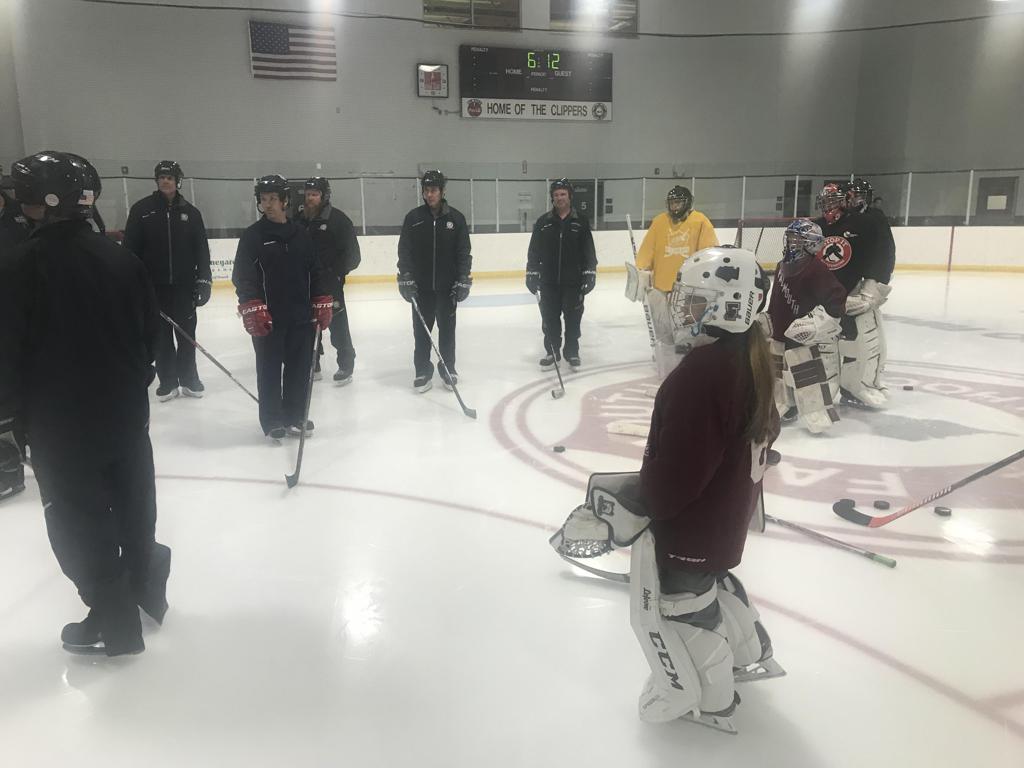 Sometimes, that may mean letting a goalie walk away at U8 because he or she doesn’t want to share a net. The program is just as interested in all the ways they can share the net.

“We might lose that goalie and we hate to lose them,” Moore says. “But it’s for the greater good of the program.”

The results have come quickly.

“It has been overnight,” says Moore. “Kids who weren’t goalies during the season are now goalies because we’re encouraging it. So, rather than having two goalies, we’re having three or four or five or six. It’s incredible. And it really feeds into that 51 in 30. It’s baby steps, but I can’t even tell you how important it is. We get them eight or nine years later in high school.”

“That’s what happens when you don’t develop goalies,” he says.

In addition Try Goalie for Free, LaMontagne also hosts weekly sessions for goaltenders of all ages in the Falmouth program.

“We’ve been fortunate in that we’ve been partnered up with Jim McNiff,” says LaMontagne. “We’ve had Jim down the past few years, and it’s goalies-only skills. We’re working on slides, and positioning, and save situations, and handling the puck. It’s all goalie-specific training and the progress these goalies are making because of it is starting to go through the roof. They’re getting good. And it’s because we’re investing in them.”

“Your goalie is one of the most important positions on your team. If you ignore it, you’re doing a disservice to your team and your hockey program. That’s the biggest thing to me." -- Peter LaMontagne, Falmouth Youth Hockey Goaltending Director

“We also sent some volunteer coaches out on the ice,” LaMontagne says. “It’s about getting coaches to understand that taking a little time, maybe five or 10 or 15 minutes of practice, to work with goalies can go so far. During practice, unless you spend time focusing on goalies, it’s so easy to get lost while they sit in the net and take shots. But if you can work on some goalie skating, or some pushes, or slides – some really simple stuff – it’s going to go so far for them. We’re not only getting our goaltenders better, but we’re also getting our coaches better.”

Falmouth works to keep goalies in mind throughout the program, from time in their small sheet that LaMontagne says is perfect for training goalies, to cross-ice games, to in-house games with quick-change pads and intermediate nets, to practices. And the future may shine even brighter.

“We made a commitment to it because we had a problem in our own program,” says Moore. “We’re going to apply for a Cheever grant and we’d like to offer more clinics. We have some opportunities that other programs might not have [in owning the rink], but if you have two teams with 11- or 12-man rosters, you can fill that ice with 15 more people and you wouldn’t even know they were out there. You can use the middle of the ice for goaltending. It’s a mindset. It can be done.”

Speaking of mindsets, goaltending, of course, can also be a bit of a tough sell for parents who worry about their sons and daughters wilting under such a spotlight. It’s a valid concern, yes, but LaMontagne looks at the advantages of learning to live through goaltending’s ultimate lesson at a young age. The younger the better.

“If you watch the 8U kids, we make it fun and enjoyable, so they all want to play goal,” he says. “They eat it up. They love it. Then parents are, like, ‘Oh, I don’t want my kid to be a goalie.’ But I think it has to start at a young age. The first rule of goaltending is that you’re going to get beat. You just have to learn to get over it. And then you’re just playing the next puck. At a young age, that’s where it needs to start.” 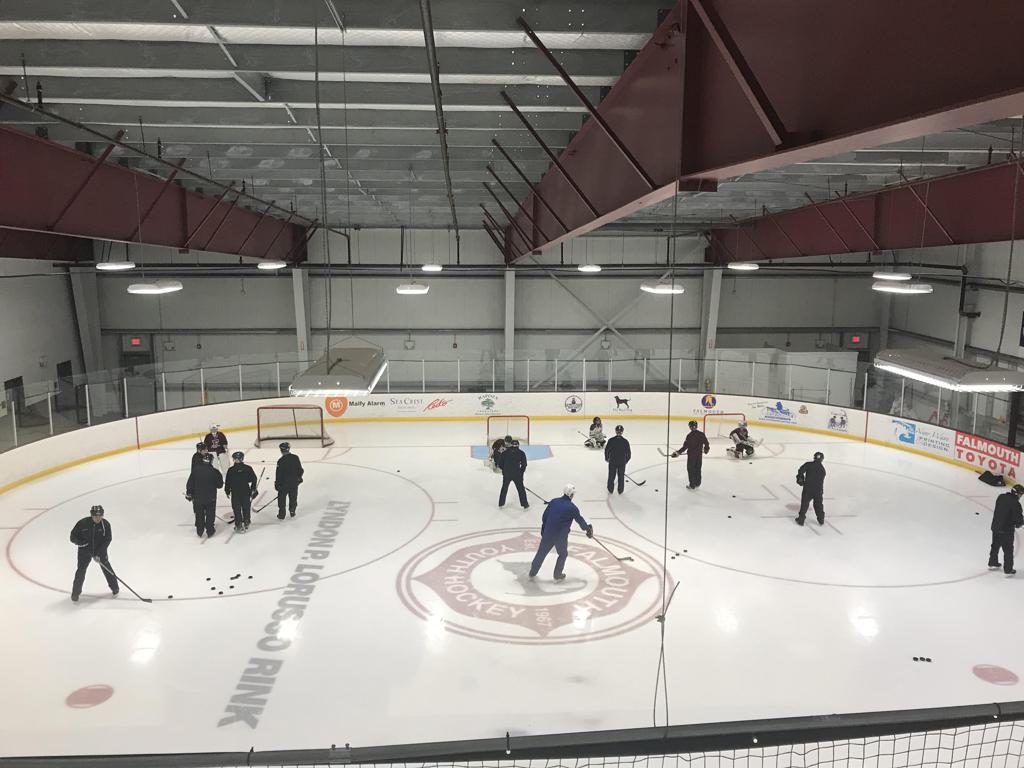 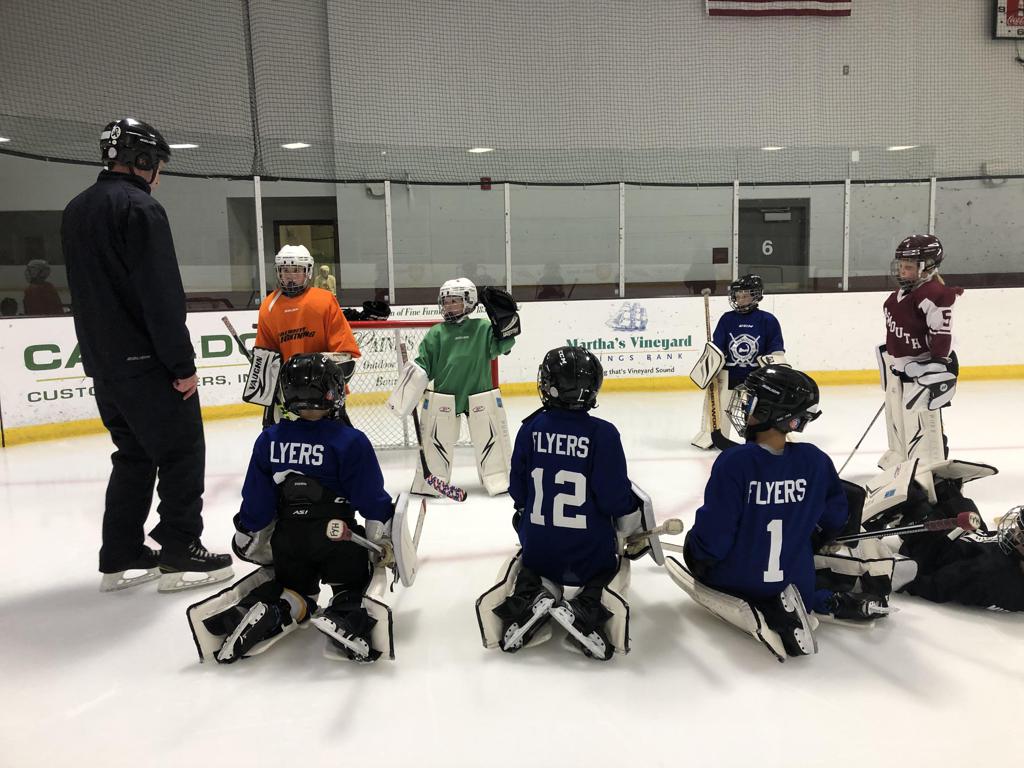 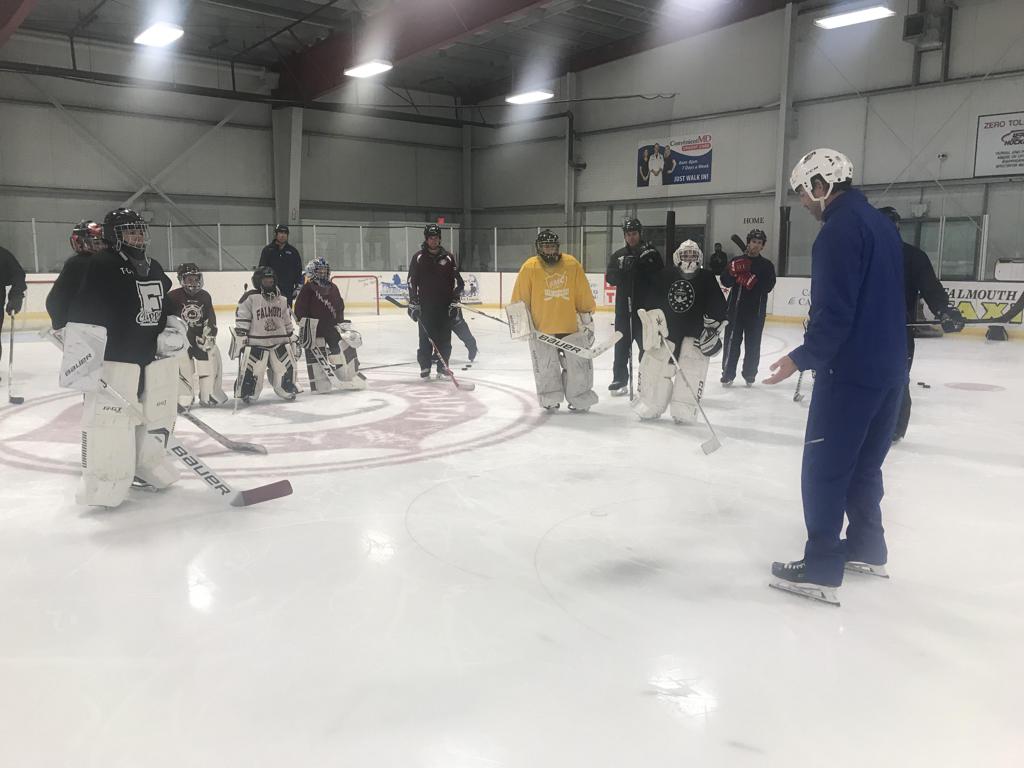 This is a second goaltending life, of sorts, for LaMontagne, who began his career in an era of stacked pads and stand-up styles. In the ensuing three decades, he’s seen the evolution of the position, and he’s loving this second life while paying it forward on the forefront of Mass hockey’s efforts to drive that evolution.

“As much as I’ve played the position for 30 years, and I still love it, I’m still learning a lot,” he says.

What Falmouth stands to learn is a new template for programs to follow across the state with the incorporation of the GDC.

“It’s imperative from the coaching education standpoint, where I stand, that coaches and assistant coaches are engaging their goaltenders,” says Moore. “Two years ago, the ultimate goal was that every program in the state would have a GDC. We were on this early. [Now,] we’ve seen the matriculation. We’ve seen the development and the growth of goalies in our program, like, real quick. It’s been phenomenal.”