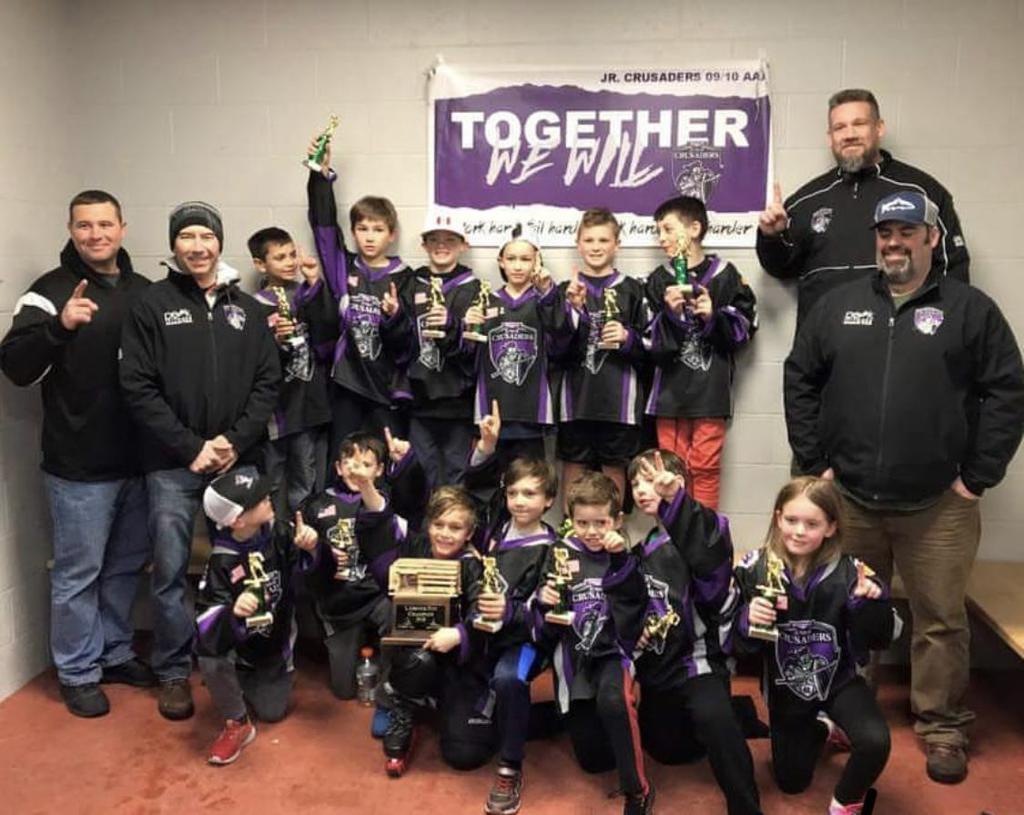 One of the most recognizable programs in Central Mass came by its name when some overlapping program merges forged a single way forward from what could have been the Bay-State-Grafton-Wachusett-Sharks-Griffins-Lakers.

It wasn’t long before that natural geographic match started to look very much like the NCAA program.

The Junior Crusaders nights in Worcester became more robust, including autograph sessions and on-ice appearances. The team colors were those worn by Holy Cross, right down to matching the Pantone colors, and the logo was a perfect complement. By 2017, a marketing course at the prestigious college had worked on marketing plans for the youth hockey program.

It won’t stop there, either.

“Last year, when we started a girls program, I went right to their equipment manager and asked what their jerseys will look like the next year,” Corey says. “I wanted to be using what they were using as their new style. My daughter with the program thought it was awesome that they were wearing the same jersey and the kids loved it.”

The Holy Cross relationship also allows for a handful of hours each week at the stunning Hart Center in Worcester.

“I know the kids love playing games at that rink,” says Corey. “So we try to schedule some games over there and we try to get our teams through the Holy Cross ice just so they have that experience.” 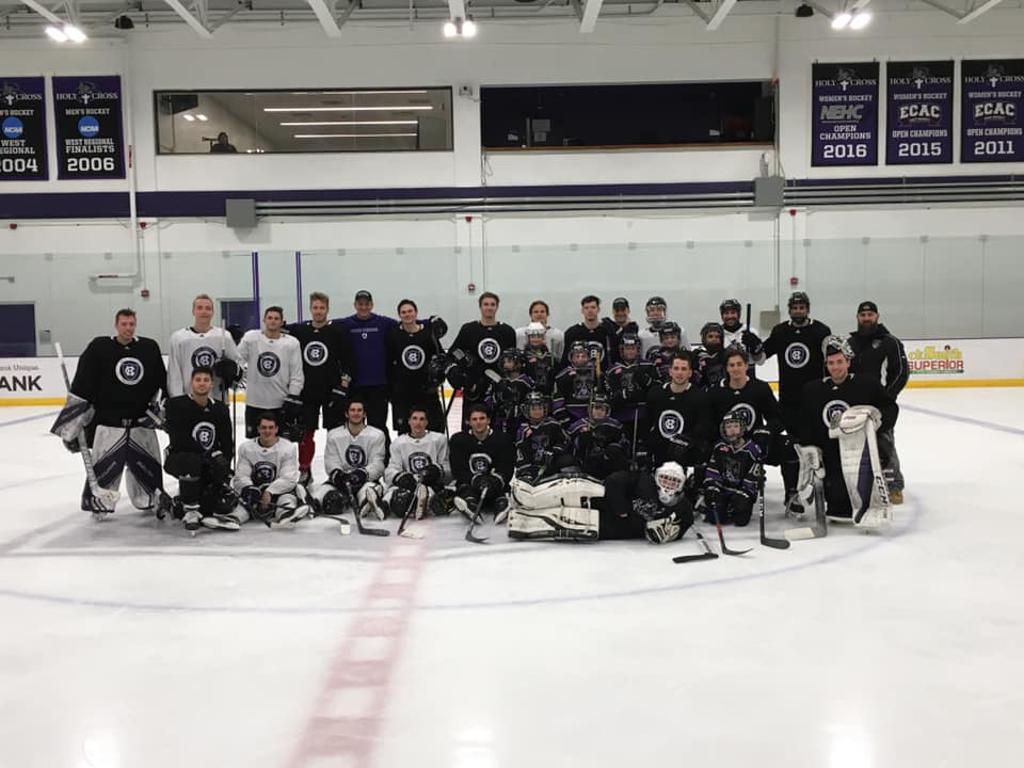 "I wouldn’t bring my kid anywhere else knowing what I know about this organization. I just want to get my kid out there as much as I can.” 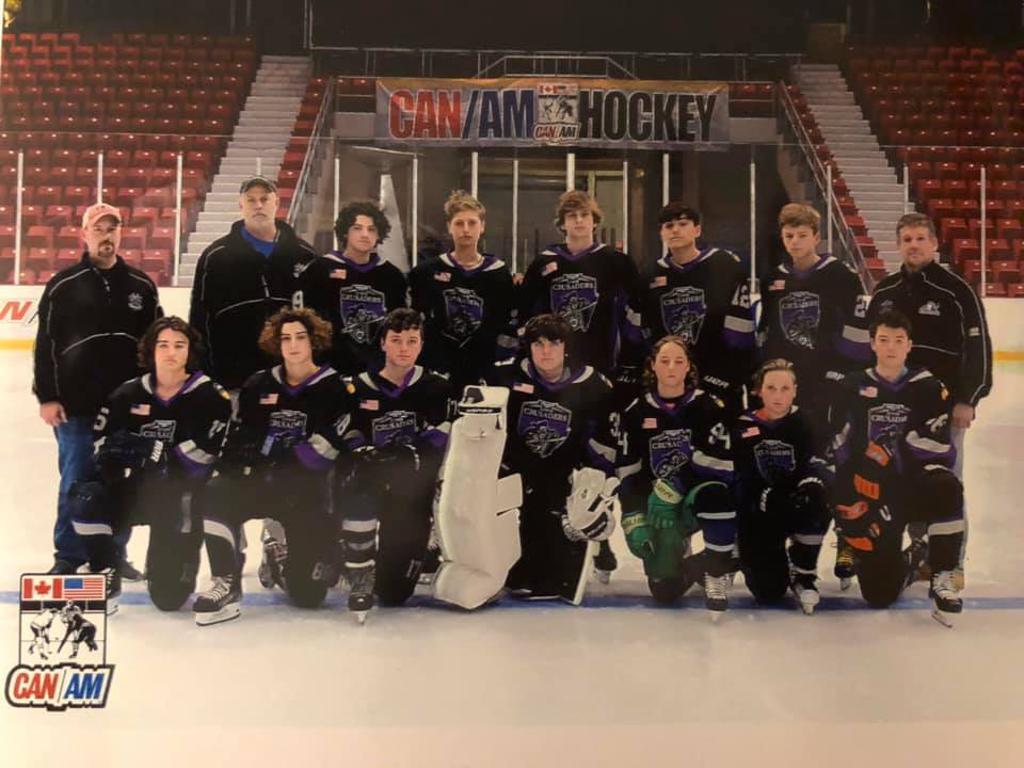 what they're doing right

The Junior Crusaders are also armed with a dedicated staff of volunteers.

District 7 is made up of more than 20 towns, so keeping the word out for prospective parents and players each year is no small feat.

“We print out about 10,000 flyers,” Corey says. “And we try to get those out to all the schools, just to let everybody know that the opportunity is there to come out and play hockey.”

“I thought we had a great response as far as all the teams being happy with what we gave them,” says Corey, who pointed to a Lakers tournament the program will host for the 34th annual edition in early 2020 as part of their template. “So we always do the music between whistles and we announce all the goals. We do entrance music when the teams come out on the ice and we had a smoke machine where we dimmed the lights, and each team comes out skating around to the music blasting.”

On Jan. 12, the Junior Crusaders will run a jamboree for U8 girls back at the Hart Center, where members of the Holy Cross women’s team will serve as officials. Corey says they’re likely over 100 players coming to town based on team sign-ups to date.

There’s also a kick-off event at the beginning of the year, plus a Halloween event where everyone dresses up, and an always-anticipated mom’s game. Throughout the year, Corey & Co. try to find some times to get the moms on the ice for practices here and there, while coaches volunteer their own time.

“Everyone loves it,” Corey says. “It’s a fun time, seeing all the moms out there. The kids love it, yelling for their mothers when the roles are reversed.”

The best thing about the program is...

“I’d say the family atmosphere,” says Corey, who concedes that trying to keep everyone happy is the most challenging thing about running the program. “We do a ton of stuff. “

“I have been with the program 12 years, and 10 years of serving on the board,” Corey says. “We have something for everybody as far as the kids go – and even involving the moms – and we bring in the siblings to get them involved. We have such great volunteers on our board, I think, providing all the stuff we provide and we are always the lowest cost in the area. We’ve always had the lowest tuition costs with the most amount of practices, and I think that’s what truly makes these kids better – the time on the ice. I wouldn’t bring my kid anywhere else knowing what I know about this organization. I just want to get my kid out there as much as I can.”