Jay has packed a lot into his 10 years — from hockey and soccer and skiing, to boating and fishing, to playing guitar and piano, plus chess, choir and, of course, schoolwork — and, yet, “here we are,” with Jay having made news by raising a significant amount of money for cancer.

Last year at this time, Jay and his dad, Paul, were watching television in their Orange, Mass., home when a story aired about a Massachusetts goaltender participating in the October Saves Goalie Challenge. Donations can be made as flat funds or as pledges per save, and Jay, who started playing goal as a mite in the Franklin County Hockey Association, wanted in. It was going to be a little late for 2018, but the calendar was marked for the 2019 effort. When Paul, who lost his sister to cancer, checked back in to see if Jay still wanted to make his run at the 2019 October Saves effort, Jay was, like so many things in his life, all-in.

Now, with this October coming to a close, Jay ranked 46th in the entire country in funds raised with more than $1,700 and climbing. In fact, the number was about $1,400 a few days earlier, but he took his banner and his helmet to a Halloween haunted barn down the street from his house this past week and closed out the month strong.

“I think it’s more of a fun thing right now than anything else,” Paul says. “But in the final days of this thing, he [was] working very, very hard at it.”

So, here we are, with Jay ranking among the top 50 in the country. Massachusetts, as a whole, ranks No. 5 as a state with more than $30,000 raised, and Jay is to thank for a remarkably significant portion of that for a 10-year-old from Western Mass. 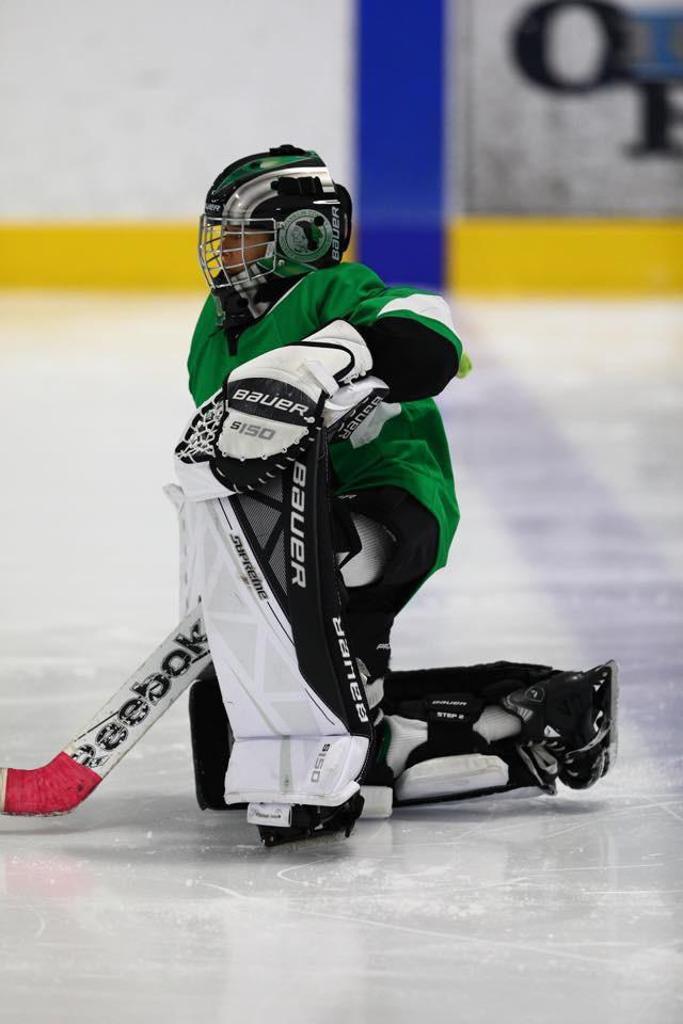 A well-meaning, articulate 10-year-old whose father sometimes has to remind him there are only so many hours in a day is something to celebrate. Jay seems to for the bill.

“I know someone who knows someone who has cancer, and I thought, well, my dad’s sister died of cancer, so I want to try to do what I can to get a solution for cancer that’s taking over peoples’ lives,” Jay says.

Paul started Jay out with $50, but neither could have anticipated what would follow.

For next year, Jay may try to branch out with his efforts to impact the lives of others.

“I think I’ll try and see if there’s anything else that I can raise money for, or just raise money in general and then donate it,” he says.

As you might imagine, Jay’s parents are awfully proud of their young goaltender.

"I’m really proud of Jay and everything he does.Whether it’s winning in a soccer game or losing a hockey game. Everything he does or he wants to do, we support him and we’re proud of him. And he’s lucky to have the opportunity." -- Paul McGinnis, Jay's Dad, Orange, Mass.

“First of all, he’s really outdoing himself,” says his mother, Fay, who had Jay skating at the age of 4. “And Jay is not shy – he’s like a social butterfly – and he didn’t hesitate. He told everybody. He put a poster up in the rink. And, sadly, you know as well as I do, I don’t think there’s a family that hasn’t been affected by cancer. Everybody’s heart is right there.”

In late-October, a local television news station even arrived to tell Jay’s story.

“How often do you have the news team in your front room?,” says Fay. "Not often. Paul and I are just overwhelmed.”

Still, in Fay’s eyes, Jay seems to be taking the publicity in stride.

“It’s funny, Jay says, ‘Mom, I really don’t know how to take this.’ But he’s just going on with his life and worried about his English test today. I’m just thrilled. I’m just so proud of him.”

Paul, also a goaltender as a player, one who as a kid looked up to Gerry Cheevers and Ken Dryden, appreciates the experience, too.

“I’m really proud of Jay and everything he does,” he says. “Whether it’s winning in a soccer game or losing a hockey game. Everything he does or he wants to do, we support him and we’re proud of him. And he’s lucky to have the opportunity.”

Jay has distinguished himself not only through October Saves, but also on the ice rinks in Western Mass.

Last year, he played on not one, but two FCHA teams that made it to GSL championship games – a squirt team and a peewee team. This year, he’s a 10-year-old on the peewee A team.

“What’s amazing is that he’s good at what he does,” says Paul, who grew up playing hockey in Shrewsbury. “And, as his father, I’m not just tooting his horn. He loves the sport, he lives and breathes the sport, and he’s good at it. I hate to say it, but I think he’s going to surprise us all.”

While Paul looked up to Cheevers and Dryden, Jay’s favorites are Tuukka Rask and Braden Holtby, but hockey was no guarantee during his first few introductions to the sport.

“At first I was like, ‘I don’t know if I want to do this,’ but, after I got the hang of skating and I did a whole bunch of Learn to Skates, I went into mite hockey and started being a goalie, I said I want to keep playing,” he says. “So, again, here we are.”

Indeed. But why goalie?

“It’s more challenging, and you get more ice time than all the other players,” Jay says. “As a goalie, you stay on the ice and you get a lot of action. Or, also, if you’re playing against a not-so-good team, you get to sit there. ...  And make snow angels.”

These days, Jay’s average week includes about four times on the ice.

Since Paul is a coach, he has the chance to chirp Jay, too, at close range.

“I’ll say, ‘Well, do we need to roll out the red carpet? Do you need an agent?,” Paul says with a laugh.

“I want him to go as far as he can,” Paul says of Jay. “But the biggest thing I look for is that it teaches the kids to win and it also teaches the kids to lose. And it teaches them to do it respectfully and gracefully. Jay is on his road to learning that. Whether it’s soccer or a chess match, it’s going to make him a better person. You don’t win every time. I had dreams of playing in the NHL when I was his age, and it all came to an end one day, but, because I learned to win and lose, I knew how to move on. Jay made the honest effort and that’s most important.”

We are #MassProud of ALL our Massachusetts Goalies participating in October Saves. These numbers for pledges are as of Mon. Oct. 28th. Pledges are being accepted until Mon., Nov. 4th.