Get to know the budding association

What they’re doing right:
As with so many healthy programs, Framingham enjoys both a solid support structure and a commitment to a number of fortifying initiatives.

In fact, says Smith, FYHP promotes its own program through the town’s sports programs.

Smith, who had three kids, the eldest of whom is now in his 20s, go through the program, takes pride in the tradition he’s help build while with FYHP for the better part of two decades.

“We have the hard dividers, we’ve had four sessions of Try Hockey for Free, and the other part is the Bruins Academy, which has been great and helped us with our numbers,” says Smith. “We’re trying to develop the goalies with goalie practices and goalie sessions, too, and we have eight sets of the quick-change goalie equipment.”

FYHP, which makes heavy use of social media and also recently purchased all new jerseys, aims to keep its costs down and its player numbers up.

“Ice is about $300 an hour, which is up about $50,” Smith says. “But we do a lot of fundraising. We have some players who can’t necessarily afford it, so we work with them.” 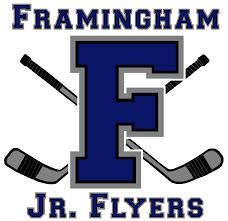 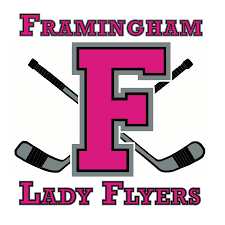 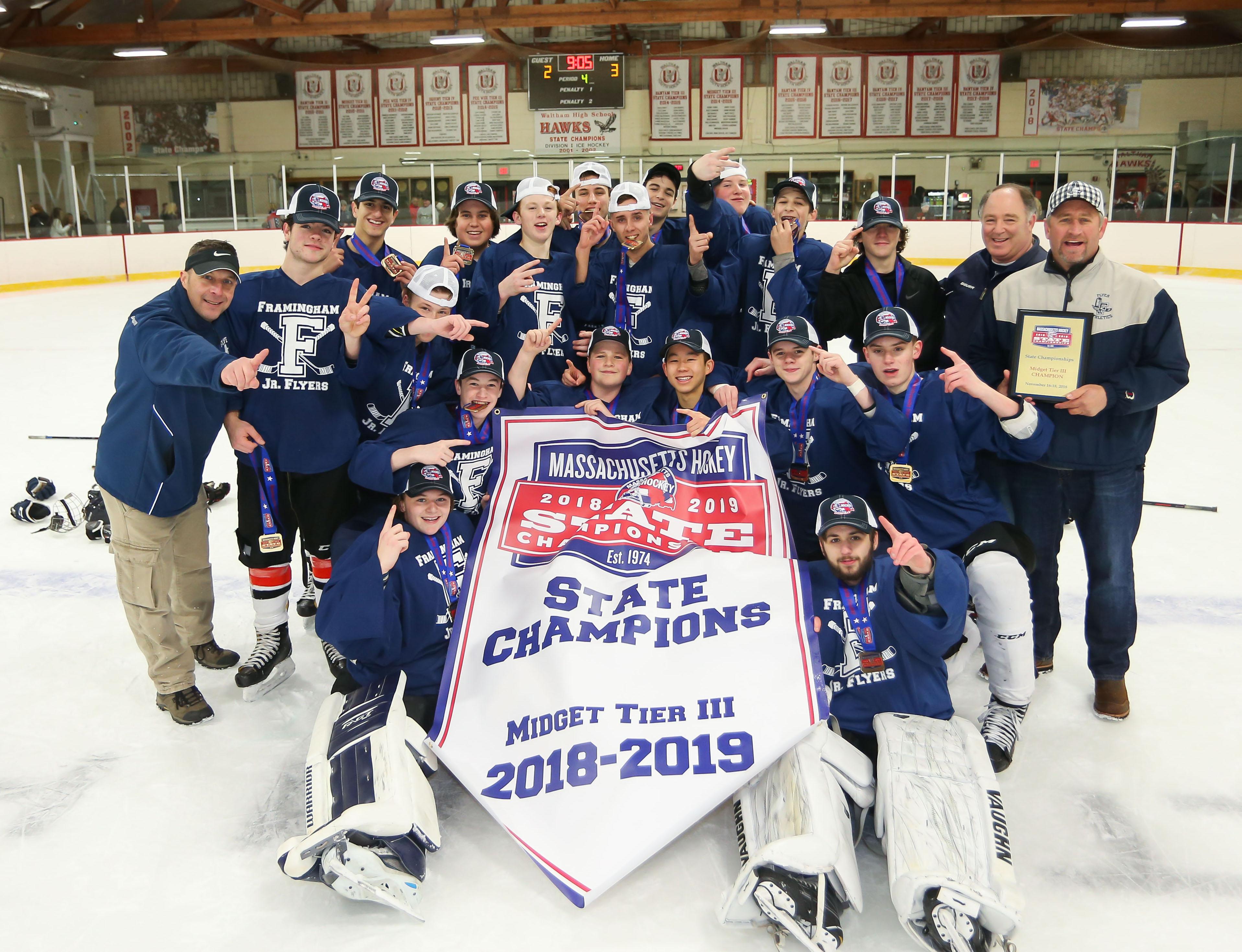 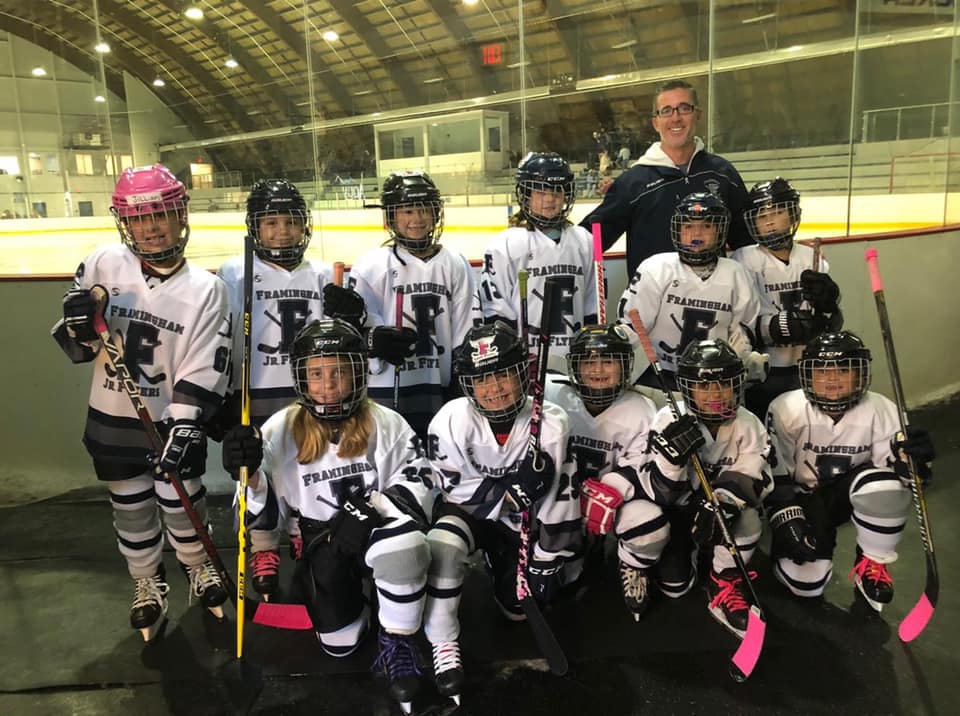 Marshall has been with FYHP for more than 10 years, beginning when his eldest son was about 6.

“I saw a need for the type of skills I have,” says Marshall, who works in project leadership and project management. “I saw a lot of people with a lot of great ideas, but, as with any volunteer organization, turning those ideas into actual actions is always a challenge.”

Marshall and Smith first met when the pair coached their sons as mites.

“Those guys knew me and my skillset,” Marshall says. “And I convert peoples’ ideas into actions.”

Among the more successful has been to leverage social media — facilitated by the posting of a position for marketing and promotion.

“We got three people who all wanted to do it,” says Marshall. “Rather than have good people not be able to participate, I asked if they all wanted to form a team. One focuses on Bruins Academy, one focuses on social media and merchandising, and the third focuses on our girls program.”

The girls program, which had some relatively humble beginnings, now boasts six teams for 2019-20, and a recent multi-million-dollar rink renovation includes girls’ locker rooms. Theirs is a success story in and of itself. That’s where Quinn comes in.

“We were developing a fair number of players at the Learn to Play level,” Quinn says of the days when girls who were playing co-ed in Framingham typically left the program as a second-year squirt or peewee.

A pilot program started the ball rolling as a proof of concept, and the program grew.

“We put in for a Cheever grant to do 3-on-3, and that was huge,” says Quinn. “To do it, we had to mix age levels and it was a significant skills gap, but they had fun and it was pretty successful. That was quite a few years ago now.”

This year, there’s a 16/19U team, a 14U team, a 12U team, two 10Us and an 8-and-under. At the high school level, says Quinn, the varsity program should benefit from one of the strongest groups of eighth-graders the town has seen coming out of the youth programs.

“The key is to keep the girls who start with Learn to Play in the program and develop those bonds with their friends, and they don’t want to leave,” Quinn says.

“Surround yourself with a bunch of people who love hockey and have the best interests of the kids in mind. And then work with USA Hockey and Mass Hockey. These programs work."

So, what would Quinn, who understands that not every program would have 18 girls’ coaches at a preseason coaches’ meeting the way his did a few weeks ago, recommend for a town considering building out a girls’ program to this extent?

“I would come at it realistically,” he says. “You have to have the player base to get to realistic minimum roster sizes. We knew the numbers were there if we could retain the players from the Learn to Play.”

Now, over 25 percent of the FYHP population is playing girls’ hockey.

“If you’re the right size of Learn to Play and you know you can get to one team at each age level, it’s something to pursue,” says Quinn, offering some ideas. “Take 10 half-sheets and break them into clinics for girls, ages whatever, and get them on the ice, get them having fun. Go for a Cheever grant. From there, you’ll see a response and build it up. Then, try to retain the girls. You can go to the families and say, ‘We have enough players, but only if we’re all in.’ You need that critical mass.”

Quinn has also found that a higher-than-average number of families across the girls’ programs are families without hockey experience.

Marshall is always thinking of new marketing efforts, too. 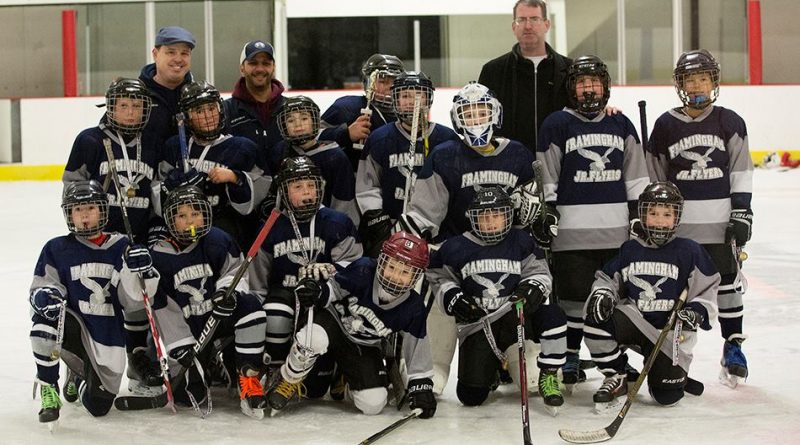 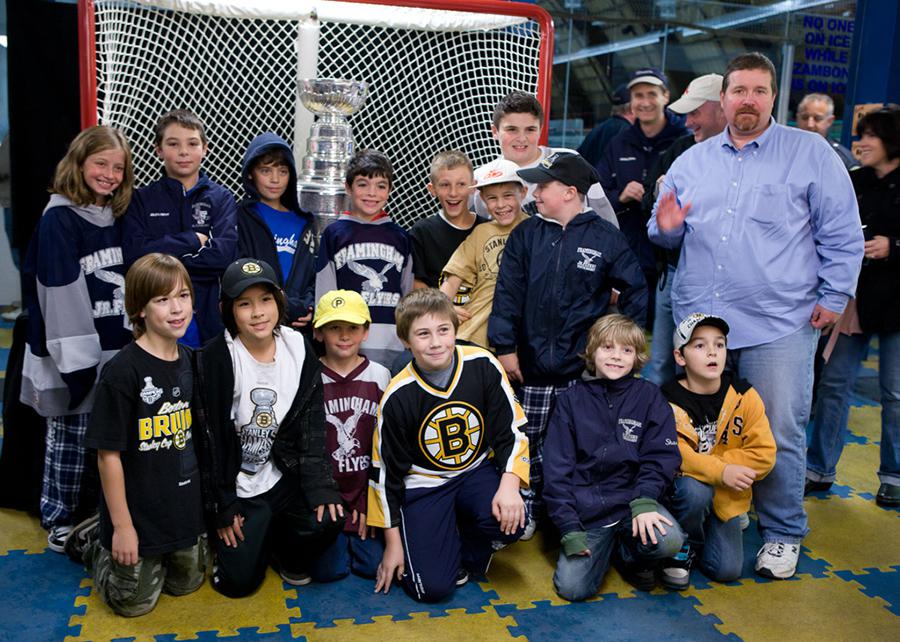 “We want to try to reach into new demographics,” he says. “Framingham has a very diverse population, and, when you look at Framingham Youth Hockey, that’s not really reflected. I’m challenging the marketing team to figure out how we can get into those communities. How do we bring hockey to families who maybe haven’t traditionally thought of hockey as a sport?”

Both Marshall and Smith pointed out another well-attended initiative: a 3v3 program. The program has drawn back some of the familiar faces whose introductions to hockey came through FYHP.

“We try to get kids back in Saturday nights,” says Smith. “And it’s some of the kids playing club, but it’s so much fun. It’s almost like playing pond hockey and it’s a lot of fun right now.”

what the future holds...

Says Smith: “We’re trying to work with those women’s hockey programs and we’d like to continue the success of growth and retention. We have a great rink and a lot of great people. But we’re always trying to get more kids. We want to keep kids in town to be Flyers.

For Quinn, that entails the continued early success story of the Lady Flyers Development program.

“Our Learn to Play program goes up to the age of 9, and this is 9-17,” Quinn says. “And that’s another way we’ve grown the program. You may not have enough U12s until the U10s age up, but, if there are other U12s out there who just want some more ice time, maybe they’re ready to play on a team.”

“We brought in a skills coach this year who has worked with NHL teams and is a head coach at Walpole, Jon Lounsbury,” he says. “So, [Lounsbury] will run our skill program this year. And we have a fitness professional, Tricia Beninati, who will be running an off-ice program. It’s optional and we’re putting it out to all of our teams.”

Last year, the Bantam As were the first team in. This year?

“We had five teams opt in,” says Marshall. “[In the first year], it worked great in developing their strength their flexibility and they agility.”

We’ll leave that to Smith:

“Surround yourself with a bunch of people who love hockey and have the best interests of the kids in mind. And then work with USA Hockey and Mass Hockey. These programs work.” 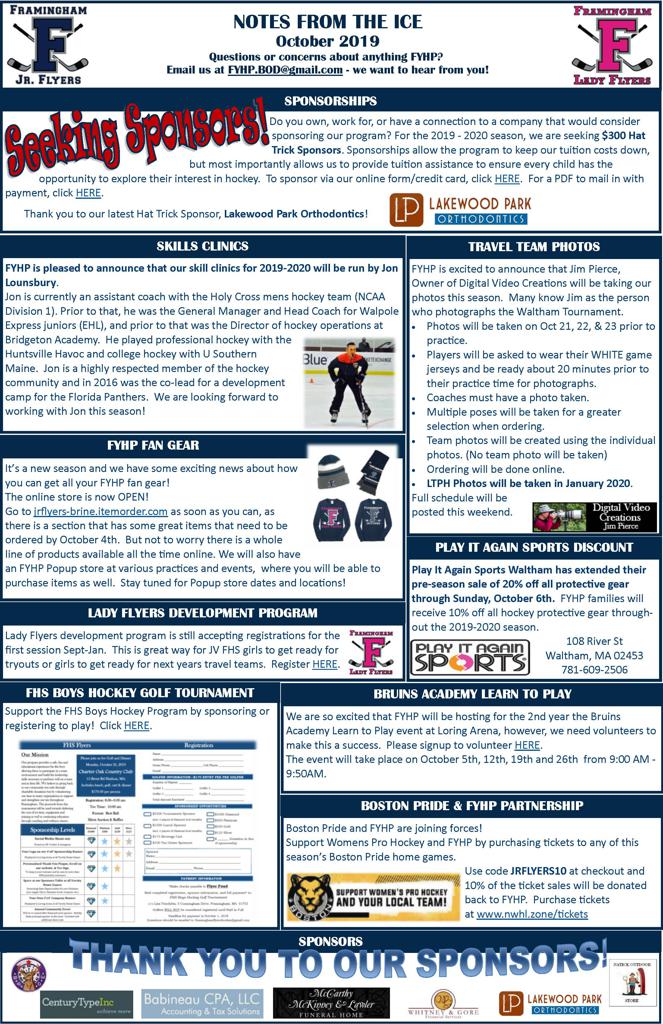 Here is an example of great communication from Framingham with all their members. 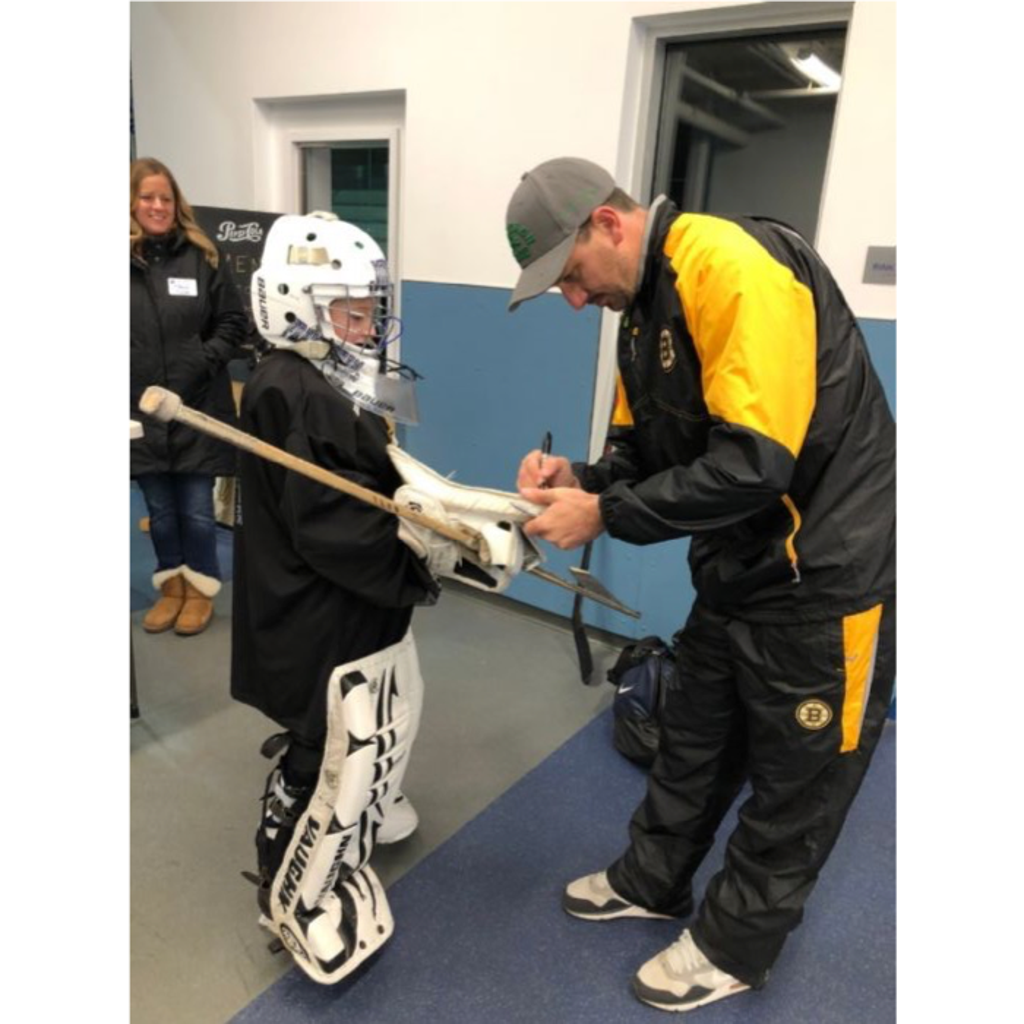