“I would coach a team and just practice all year,” he says. “I love practice. I enjoy practice more than the games because I think there’s so much more going on.”

“It’s incredibly hard,” says Rice, whose youth practices today are dramatically different than when he started coaching his eldest child in 2007. “It’s hard for me, too. And I’m fortunate in that all I do is hockey. So, when I’m working on youth practices, I’m in my office, as it were. I’m not selling life insurance or trading stock.”

While Rice’s day job keeps him immersed in hockey, Rice is also a father of three and has that same dizzying number of sports commitments as so many hockey families. Hockey is a living for Rice. Engaging practices for changing generations are a way of life for him, and he takes those seriously in the face of the challenges.

Among them: There isn’t a lot of time in a hockey practice.

They call it ice “time” for a reason. The doors open, kids rush on the ice and the doors close, only to open in enough time to rotate in a new group of skaters to begin the cycle again.

“Hockey is unique in one really big aspect that really ties into hockey practice: We have this finite time,” Rice says. “From the time the Zamboni guy rings the bell to the time they shut the door, that’s about 50 minutes. And 50 minutes pretty quickly becomes 45 minutes after getting the nets set up getting the kids together. If you’re not prepared, engaged and excited, then that 45 minutes will not be very productive. The preparedness of the coach has to be really high.”

And in terms of making best use of that time for a team and its players, preparation is key. The earlier, the better.

“You kind of need to sketch out a map of the year,” says Rice. “I think having a general blueprint helps. And like any map or navigation system, the clearer the beginning point and the clearer the destination, the easier it is to follow. But if you set out with squirt majors to ‘win the state title,’ that’s not really creating a direct route. It’s worthwhile goal, but it’s kind of a vague destination.”

Rice’s own goals for creating a creative practice?

As a coach of his daughter’s U14s, he’ll build coordinates to plot his team’s and his players’ individual Points A and B.

From there, practice time can be devoted to those elements. A challenge, of course, is how to keep things interesting. How can a hockey coach design a practice plan that will interest players? The days of lining kids up and skating them through drills have long passed by for youth coaches who would like to be successful. The game is different. Parents are different. Kids are different.

“It has to be fun, and, if it’s going to be fun, kids have to play,” Rice says. “They’re not having fun standing in line. Do you have more fun when you go to a restaurant while you’re standing in line or when you get your food and eat? So, fewer lines, more action, more enjoyment. You want your practice to be something that, sorry parents, kids are bugging you, ‘Let’s go, let’s go, we’re going to be late, and I don’t want to miss it! Let’s get going.’ If you have that, I think you’re on the right path.”

When it comes to actually sitting down to write out a plan, Rice points coaches in the direction of a number of resources, including USA Hockey’s website, which is teeming with practice plans and drills. The trick, though, is to pick the right ones.

“(Practice) has to be fun, and, if it’s going to be fun, kids have to play. They’re not having fun standing in line. Do you have more fun when you go to a restaurant while you’re standing in line or when you get your food and eat? So, fewer lines, more action, more enjoyment. You want your practice to be something that, sorry parents, kids are bugging you, ‘Let’s go, let’s go, we’re going to be late, and I don’t want to miss it! Let’s get going.’ If you have that, I think you’re on the right path.” 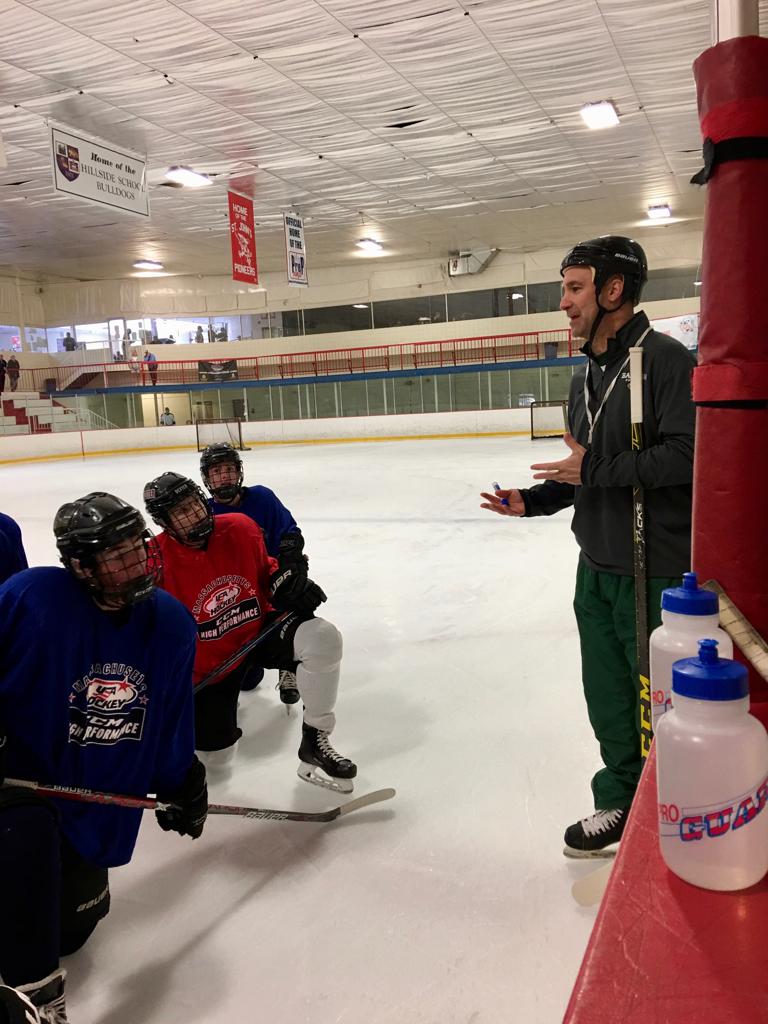 Rice insists that no matter how fantastic the material, if a coach didn’t make it to practice and the kids had been paying some attention, they could come up with a decent practice on their own.

Still, having an expert comes in handy. Rice, who played for Babson as an undergrad, owns a conference record of 166-80-30 in 15 seasons at his alma mater and has coached six All-Americans, certainly qualifies.

“For me, I’m fortunate in that I have a database in my head with hundreds and hundreds,” says Rice. “But it’s about creating game-like environments.”

Rice favors what he calls games “with restrictions or parameters” to address certain areas, but “doing it in a playing model as opposed to a drill,” he says. “If you devise a game that emphasizes something, you have more opportunities for players to repeat the skill, and you can interject some coaching and technical aspects, but you’re also doing it in a live situation.”

It is also important to note that, as the word suggests, creativity isn’t about creating a template – it’s about developing creative environments.

“I think you provide some parameters of structure and then allow the creativity within it,” Rice says. “Like an artist with a canvas, [practice] is the border. But, within that, unless you’re attacking a specific skill, you have to allow players to execute it through their vision. I try to avoid the cookie-cutter or say, ‘It must look like this,’ as opposed to the adaptability of, ‘This is what needs to be done, now perform it how you best can.’”

Over the years, as so much of what families put into hockey – the time in the car, the time at the rink, the money it costs – games have become more consequential in part because there is tangible consequence in the form of a scoreboard at the end of a game. The incongruity of this, of course, is that a well-run practice will give a player far more reps in the sport than any game ever will. Even if the stakes seem lower, practice remains vital.

“We just get so focused on the results and the perception of the [game] opportunity, and what we think that result means, or translates to down the road,” says Rice. “If we can relate it to other parts of our lives, we probably would all, myself included, make much better decisions about where we really invest our time.”

Like many of today’s coaches, Rice grew up in an era where practice would rarely be confused for anything nearly as enjoyable as a game. Games were the reward for practice. But, particularly for young players and in the absence of a scoreboard, a creative practice can certainly catch up to being as fun when one considers how much more of the game is played at a good practice.

Rice has kept up with these times.

“Even me, I can’t just say, ‘This is how I do it,” he says. “And I think as coaches we say, ‘I told you to do this.’ Well, that’s not helpful to the athlete. They are trying to do what you told them. But your ‘I told you to’ just put them in a level of self-doubt and confusion. I think if the coach isn’t interested in changing, getting better, seeing through the players’ eyes, recognizing blind spots, improving the environment, and making the experience and practice better, then you’re doing a disservice.”