When you’re talking about the sports psych game, there seem to be more questions than answers—so many questions. Thankfully, Dr. Adam Naylor is a listener.

That’s part training and part minister’s son, and the combination, along with his own deep interest in human beings – athlete or not – makes for the kind of person who has spent much of his professional life trying to help them.

Now at Northeastern University and leading its “mental game division of sports performance,” according to the Huskies’ website, Naylor works with a wide range of athletes in trying to bring out the very best in their performances on and off the ice, court, track or field.

“Just the desire to sit and appreciate where someone is at, with very little judgment,” Naylor says when asked about some of the keys to his own success. “I’m not very judgmental. I think that’s key to a teenager. I don’t drop trite lines. I can probably guess some of the things they’re going through, but I slow to let them tell me about them first.”

Day in the Life of Dr. Naylor:

Naylor, who earned doctoral and master’s degrees in counseling after studying psychology and human movement studies as an undergrad, has more than fertile ground among athletes. He’s also a parent, and USA Hockey, along with individuals who have competed in the NHL, the Olympics, NCAA championships and in the UFC, look to him for his unique perspective.

Parents could also learn a thing or two from Naylor. As you might have guessed, it’s not going to feel punitive when it comes from “Doc.” No, it often begins with a puncturing of the tension around the idea of the modern day “sports parent,” the lampooned caricature version, for an icebreaker.

“I try to get parents to laugh at themselves,” he says. “I call bad sports parenting just ‘caring run amok.’ I think parents have been ostracized as the problem, but they’re paying the bills, and driving their kids around, and asking tough questions, and they love their kid, and sometimes that looks wacky. And when I say it that way, parents start to breathe.”

Now that the parents have settled in, Naylor has them where he needs them. They’re relaxed without being parent-shamed or shouted at to … RELAX!

“You tell people to relax and they freak out,” he says. “Then, I’ll add in something about human development.”

Naylor looks at where a young athlete should be at stages from before the age of 10, in middle school, in high school and beyond, and he keeps the end goal in mind.

“For any athlete, it’s one who is able to use their voice, make choices and learn on their own, knowing that that’s the end destination,” he says.

So, Doc, how are parents doing?

“Most are doing pretty well,” Naylor says. “But it’s a really confusing time to raise a young athlete. Being a Massachusetts guy, I remember not so long ago that your options were [somewhat limited]. Now, as someone who is neck-deep in hockey, I don’t think I could tell you what league you should send your kid to. There are too many. So, if I can’t figure it out as someone who is, air-quote, ‘an expert in the industry,’ how would a parent lnow? So I think they’re doing OK in a super-confusing landscape.”

That doesn’t mean, however, there isn’t work to do. And Naylor can help there, too. Without judgment, he looks at the positive effect of parents stepping back occasionally to look at how things are going for young athletes in their own super-confusing landscapes.

“Check out The Coddling of the American Mind,” says Naylor. “It’s a phenomenal book that really talks about the anxiety epidemic. You can have well-intentioned ideas, and positive reinforcement, and all these things that were meant to support kids … and they have created anxiety. Every three months, step back and take a look at, ‘What are we doing and does it fit our values?’”

If Naylor were asked about the biggest hindrance to success of a young athlete for which a parent is often responsible, he has a quick answer: “Failure to allow healthy challenges to happen.”

The next time you see a young player, even if they’re better than everyone on the ice, sitting on the bench for the last three minutes of a close game, think about both player and their human development.

“That’s a healthy stress,” Naylor says. “They’re going to be in that role at some point in their hockey career and they’re going to handle it better.”

Naylor also supports the thinking that a player’s environment is a critical component of success. And parents can affect significant change there.

“We as parents and coaches can create environments where kids can really leverage the skills of resilience without them even knowing it,” he says. “Sometimes, as adults, we rob them of those experiences. We don’t want to see them suffer, so we sometimes pave the road for them by accident. We can teach kids to take healthy risks.” 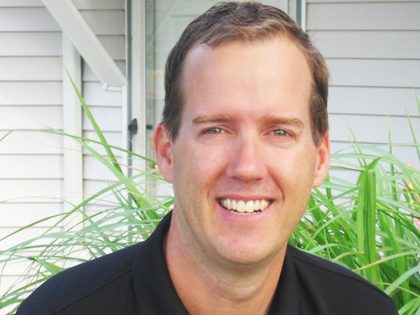 “We want to allow our kids to be kids. Encourage those things. Teach kids to practice with curiosity.” - Dr. Adam Naylor

Pointing out the anecdotal evidence so many of us see as parents, Naylor has some harder evidence on the wiring of young athletes. Hint: They’re surprisingly tough.

“Under the age of 10, you don’t really compare yourself to others,” says Naylor. “What’s really cool is the science has told us for many years that, if you’re under 10, you think effort and ability of the same thing. Think about that. That’s so cool. That means if I tell a kid, ‘You stink,’ they’ll go, ‘OK, I just have to try harder.’”

“We want to allow our kids to be kids,” Naylor says. “Encourage those things. Teach kids to practice with curiosity.” 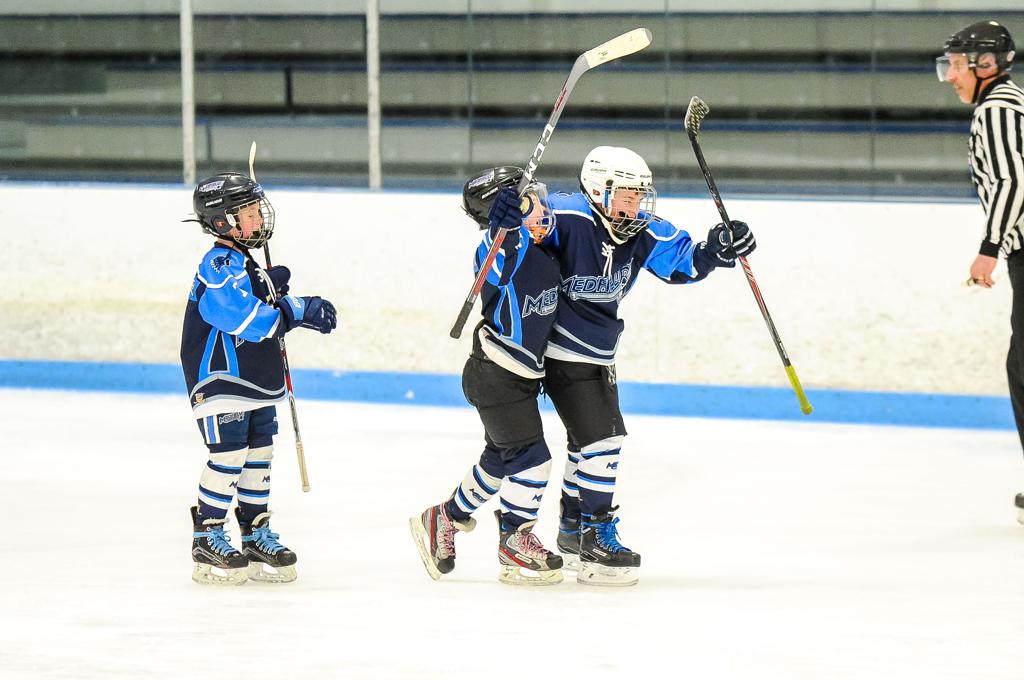 Naylor notes an erosion of that curiosity beginning between the ages of 10 and into the teen years.

“That’s the best thing about all the best athletes, that they’ve been curious about what’s next,” he says. “So I think it’s teaching kids to be curious. How do we plant seeds of curiosity and challenge without it sounding too adult-like? You might say, ‘I wonder what you could do with the puck over there in the corner.’ You can just leave it like that. I didn’t put any rigidity around it. It doesn’t look structured, but you’re also learning that much more. And sometimes it’s just acknowledging that, ‘Hey, that something you did today was really cool.’”

When those curious kids grow up a little, you might see them learning off the clock, too.

“I always love watching what goes on before and after practice,” says Naylor. “You have two or three guys on the ice with a bucket and they’re trying to hit crossbars. I think adults accidentally step on that for desire of organization. [The players on the ice] are making up fake games, but they’re building growth skills and confidence.”

First, wonder what someone means when they say the word.

“I think ‘confidence’ is one of these gigantic terms,” Naylor says. “’Oh, my kid needs confidence.’ I’m not sure they need confidence. They might need bravery to take risks, so we may redefine it. Sometimes, it’s a misnomer. A parent might come to me and say, ‘I’ve been telling my kids they’re really good, but they need to build confidence, and could you do that?’ And I say that if it didn’t work for them, we need to find another way. Pumping tires only goes so far.”

It may be heartbreaking for a hockey parent’s career, but it’s ultimately about the player.

“If they’re 8 and they don’t want to do it after a rough week, it may be, ‘No, we committed to the season so let’s give it a shot,’” says Naylor, a proponent of sticking to the commitment of a season. “’And we don’t have to do it again next year if you don’t want to.’ You don’t want your kid to be a prisoner to sports. That’s critical. I’m not so sure taking year off is such a bad thing. At the end of the day, it’s the kid’s motivation that’s going to drive what happens. When it feels like consistent resistance, you want to be really careful, especially at that age.”

Before the age of 10, Naylor suggests sports sampling.

“If kids sample sports, they end up [fans], and they end up pretty darn good,” he says. “You have to be careful about not allowing sampling to happen.”

Part of that sampling should include sadness.

“[Parents should notice] creativity, joy, wrestling with challenge and even, hopefully, some struggle,” Naylor says. “You want your kid to be sad every now and then. Because, if they’re not sad, it’s not a real experience. The gift we give our kids is that healthy struggle. That’s one of my biggest challenges for parents. As kids get older, are you allowing healthy challenges to happen? I think there is a parental instinct that leads us to protect our kids, and I get it. But if we don’t let our kids be challenged, they don’t learn any skills they will need as a teenager and as a later athlete.”

Tuning Out the Expert Next Door

Ask 100 parents how to raise an athlete and you might receive 100 answers. Even if they’re all sitting in the same rink-slash-echo chamber.

“Be careful who you listen to,” says Naylor, pointing out that hockey rinks aren’t always the best place for hockey advice. “I think you have to be really careful because, in no disparaging way, it’s like the blind leading the blind. Human and player development is just so complicated these days. You want to be careful when you listen to the expert next door.”

On campus, Naylor, who says he works with more than half of Northeastern’s teams, is popular with successful athletes.

“It’s usually the higher-end performers who use me,” he says. “Because they’re savvy enough to try to take advantage of the resources that are available to them. [Meetings] can range from, ‘Hey, thought we’d catch up,’ to ‘It’s my senior year and I’m curious if I’m going to continue to keep playing.’ ‘How can I be a leader to my peers?’ Most athletes use me for my full gamut of knowledge at this point in my career.”

Those athletes have also given a good deal back to Naylor in the form of being encouraged by the future.

“What is pleasantly surprising to me is, for the most part, none want a cookbook or trite answers,” he says. “That’s relieving. To me, the Top Five Mental Skills for Greatness or The Top 10 Ways to be Excellent, frankly, the science is lousy behind them. The pleasant surprise is most are mature enough to know that.”

Ultimately, Naylor’s interest is in the human being that is also an athlete rather than the other way around, particularly as they become known less for their human selves and more for their athlete selves.

“What fascinates me is it athletes are human,” he says. “Just like you and I are. I actually prefer what athletes do outside of the bright lights because those are the normal struggles and stresses of being a human being. Sometimes, the better they get, the more struggles they probably have. Just like all of us as humans. At some point in my meetings with athletes, I find myself saying, ‘Hey, it’s stinks to be human.’ And they start chuckling. It would be a whole lot easier if they were just a robot. It might be more perfect, but life would be less fun.”