How to really get noticed by an NHL scout 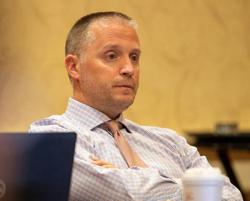 On the way from his home in Southeastern Massachusetts for an early summer weekend in New Hampshire, Mike Doneghey, Head USA Scout for the Chicago Blackhawks, could take a short breath. After the NHL Entry Draft and before the beginning of free agency, Doneghey could look back with another draft in the books. The Blackhawks aren’t often on the clock so early in the annual talent grab, which made their 2019 selection that much more important at No. 3.

What Doneghey and the Blackhawks, winners of three Stanley Cups since 2010, look for might come as something of a surprise. Doneghey dispels a few misconceptions about what catches the NHL’s eye – beginning with character.

This year, in a draft Doneghey says could have gone any number of ways from 3-10, the Blackhawks took Kirby Dach, a 6-foot-4 forward from the Western Hockey League in the first round.

“Ideally, you want speed and skill, and, if you can add the size to those two elements, then you take the guy with the size,” Doneghey says. “It doesn’t work out like that every year. It happened this year that the players we were targeting in those areas happened to have size.”

Having size can help, but needing to fit a physical mold?

“No,” says Doneghey. “The game is so fast. This year’s Stanley Cup finals were highly physical, but that’s because of those two teams. When Tampa Bay and Chicago played, it was a track meet.”

Doneghey had a few more misconceptions, too …

You must play as much hockey as possible

“Total misconception. My feeling is the sport has become too sport-specific. There aren’t enough athletes playing anymore. At the combine in Buffalo, one of the real eye-openers is when guys are doing their high jumps. Some can barely get off the ground. That’s where it shows.”

Talent alone will get you everywhere

“Misconception. Talent is a small piece. Eventually, it’s hard work and character. You might have the skill to get noticed and the talent to put yourself in a position to succeed – but, eventually, the other characteristics, if you don’t have those, you’ll be just another talented guy who never made it. At every level, the window closes a little bit more. Some don’t have the whole package that makes them appealing to an NHL team.”

“Another misconception. We do so much research character-wise, we spend countless hours talking to these kids, either on the phone, in person, or through text, that you really get to know them throughout the 12 months of their draft year. And at the NHL combine, if the kid can’t hold a conversation, or he’s nervous or twitching, or if there isn’t any eye contact, we pick up on that right away.”

“I think you can be, but there aren’t a lot of those players – even Patrick Kane isn’t a one-dimensional player. He’s one of the top five players in the league. You still have to be good in other areas.”

Don’t consider evolving into a new kind of player

“No, you have to evolve as a player. We draft a lot of guys who were the top player on their previous teams. You look at a Noel Acciari, and he was playing in all situations at Providence College. He was a top scorer. Now he’s a fourth-line guy. Sean Kuraly was a different player at Miami of Ohio. They had to evolve or they would be out of hockey.”