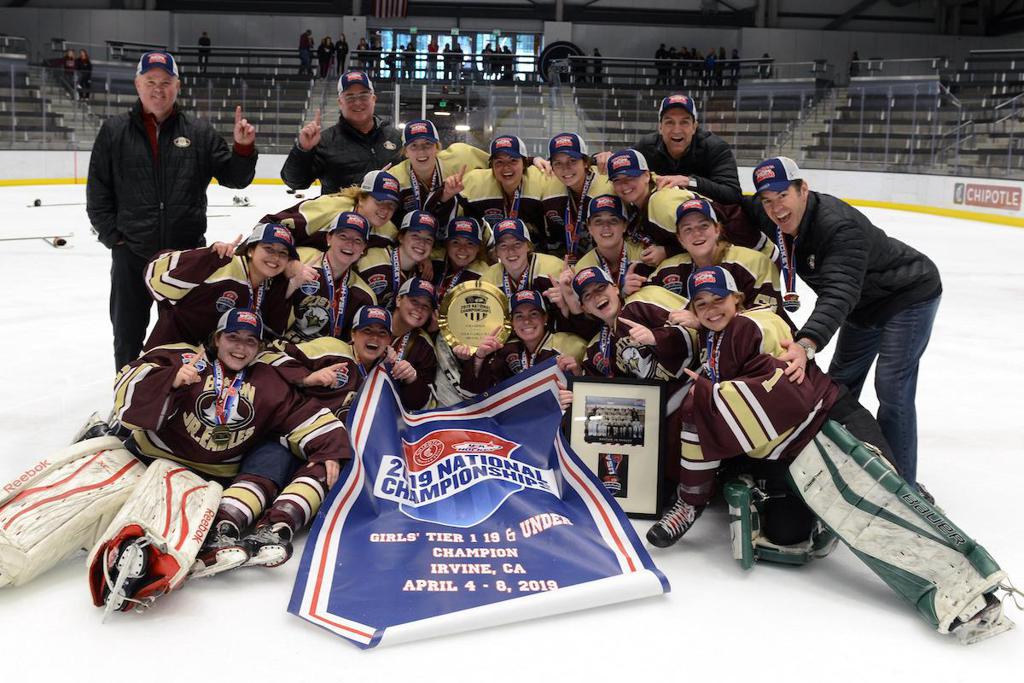 Coaches for all three teams were, understandably, quite thrilled about coming home from an unforgettable weekend with lifelong memories for their players.

Few could have been more proud than Mike Mullowney, the man responsible for building the Boston Jr. Eagles’ girls program, which he began as a geographical alternative to existing programs when his daughter was 8-years-old.

Mullowney can still remember that only six skaters showed up at that first set of tryouts. But the Jr. Eagles are very different program now, and his daughter went out with a championship that left her father stunned.

“I have to tell you, it was obviously euphoric, the celebration,” Mullowney says. “But I think it was really shock.”

The Jr. Eagles were certainly no stranger to Nationals, but to emerge from a final four of the Chicago Mission, Belle Tire and Shattuck-St. Mary's was a tall task. That task, made tougher by an overtime semifinal game Mullowney wasn’t sure would end in their favor, meant a showdown against Shattuck, whose roster included more than a line’s worth of players with U.S. National U18 Team experience.

“It’s sort of silly that we were able to beat Shattuck,” Mullowney says. “When you put our roster up against the Shattuck roster, there is the really no comparison. They might’ve had six or seven girls on the U.S. National Under-18 Team. We didn’t have any. It was really the one time we were, frankly, overmatched on paper. So I think it was a little bit of a motivation for the girls. They wanted Shattuck.”

Shattuck hadn’t lost at Tier I 19U in years, and while Mullowney’s daughter was making her third trip to a national championship game, the split-season team plays about half as many games together and had only a handful of practices since Thanksgiving.

“This was sort of the last go-around for the group I started with, including my daughter,” he says. “So if it was really a nice way for her to go out.”

Quite a run, indeed.

“We’ve never had more interest in our program, at every age level,” says Mullowney.

Winning Nationals can only help the program’s momentum. As does having players taking their careers to the next level.

“We had kids at Harvard, at BC, we have kids at Middleburry, and we’ll have more of the same next year,” Mullowney says. “Kids are going to BU, Mercyhurst, Brown, Penn State. We’ve committed over 40 players to college hockey in just over 10 years. It’s pretty remarkable.”

Mullowney would also like to see that success at Nationals translate to success on the national stage.

“I’ve said for years there are lots of really good players in Massachusetts, but I do feel like we may have been overlooked a lot when it comes to national teams,” he says. “No disrespect to Shattuck, but we have some kids who are good enough to be on some of these teams. We just won a bunch of national championships and these kids are passionate about the game. A lot of them are going to college. Minnesota is clearly the top for girls hockey, but I think we’re in the conversation now.” 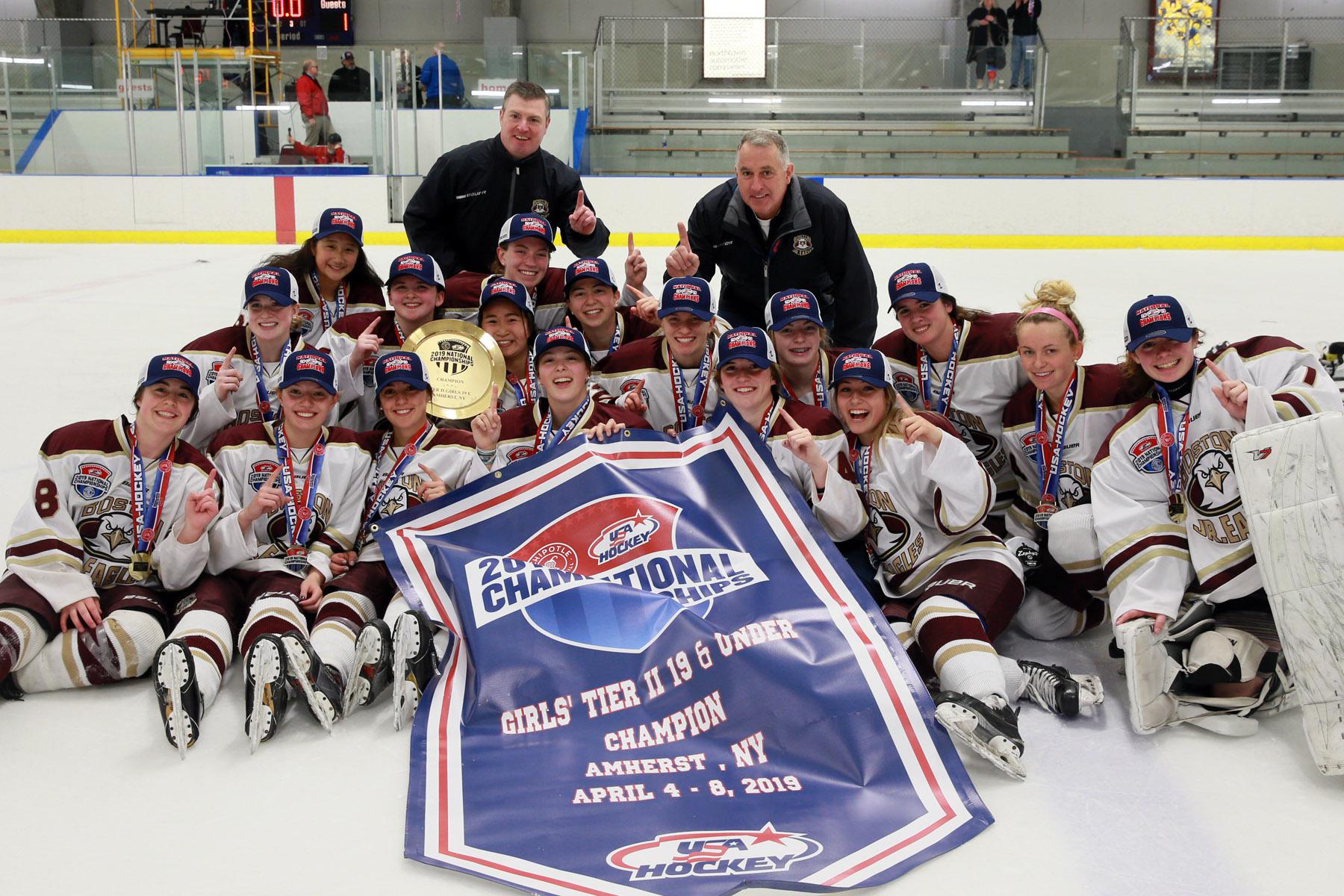 Madi Morton doesn’t say a whole lot, but she spoke volumes for the Tier II 19U Jr. Eagles at Nationals in Amherst, N.Y.

This edition of the Jr. Eagles program will go down as undefeated at Nationals and seemingly unscathed, but Morton helped coach Mark Wall keep a moment of concern at bay.

“We were playing at such a high level in those games that we didn’t have any great problem,” Wall says. “I knew that the quarterfinal game was going to be our toughest game because, now, it’s one and done.”

The Jr. Eagles were down, 1-0, against South Dakota after two periods, the first time the team was down all tournament long. And they came out flying in the third.

Morton, a defensemen, scored on a long rush to begin the comeback.

“She came by our bench and basically told everybody, ‘We’re not losing this game,” says Wall. “It was like a moment from a movie. We felt like a team of destiny. I really didn’t worry after that game to be honest with you.”

“It’s great,” Wall says. “It’s my third time at Nationals, but it’s all exciting because the kids are so excited about it. Even though they might be young adults, they still get fired up about playing for a national championship no matter what age. These girls are 17- and 18-years-old and yet they’re still pumped about playing hockey this time of year.”

For Wall, the title run was especially gratifying for the additional attention it gained the Jr. Eagles program.

“At one of our games, we had to have had at least 20 college coaches behind the glass watching our game,” he says. “It’s a good feeling. And the girls see that. [Mullowney] is ultra focused on placing girls from the Eagles program at top colleges, and I think that attracts kids to a program. That dedication from the top down.”

Next year, of course, the team will take on a different look, but, like every program that wins a title, they also win a lifetime of memories.

“The best part about that team was the togetherness that the group had,” says Wall. “We didn’t have any cliques or groups. We had 17 players that all basically played as one. There were no egos, there was no selfishness. Some of these kids aren’t going to play together next year, but I think winning Nationals, and knowing how close everyone was helps make that a little easier on the transition. We might not be together, but we had one heckuva run as a team together.” 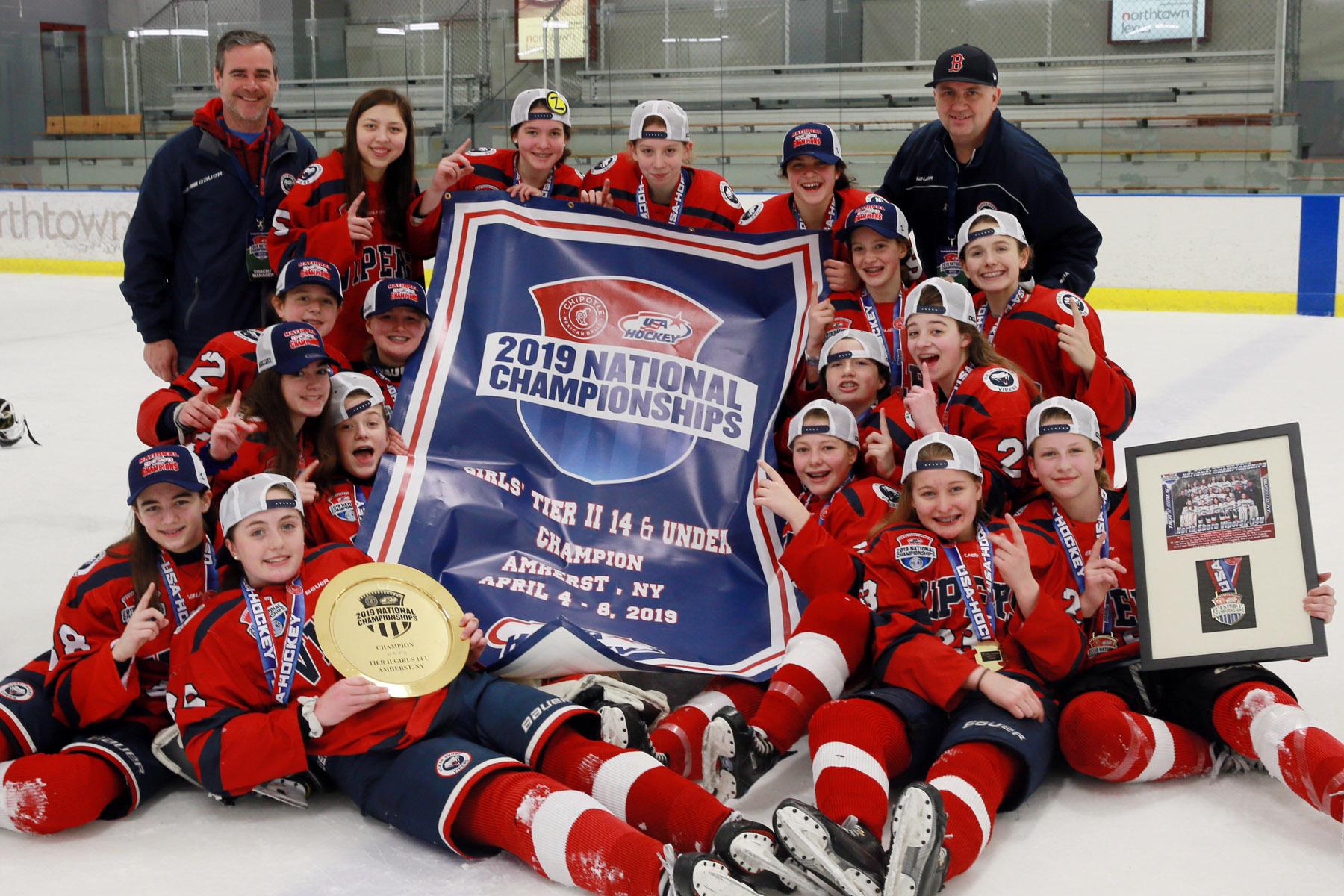 While the Jr. Eagles’ expectation levels are soaring, Michael Littlewood, who figures he’s coached 30 teams, was taking his first team to Nationals after all these years – and the North Shore Vipers would have to defeat, of all teams, the Jr. Eagles, at Tier II 14U to win their title.

“The kids had a blast,” says Littlewood, who played his own high school hockey at Malden Catholic. “It was an awesome feeling seeing all the girls celebrating together. I know none of them wanted it to end.”

Littlewood figures more than half of his players could have played Tier I, and his most productive player, Samantha Taber, finished Nationals with the most points of any female player in Tier I or Tier II 14U, 16U or 19U.

Taber, a star as an eighth-grader at Austin Prep, scored 15 goals and added five assists for 20 points in six games, including a hat trick in the final.

“I don’t think she’s going to be an Olympian, I think she’s going to be a great Olympian,” Littlewood says. “She’s one of the best youth players I’ve ever seen in my life. She’s a super talent, and she’s an unbelievable kid. I think that helps our team environment. On the ice, she plays with confidence and has some swagger, but, with her teammates, she is an unbelievable teammate.”

Littlewood, even though his team finished with three of the tournament’s top five scorers, including Julia Pellerin, the daughter of former NHL player Scott Pellerin, is the first to say that the Vipers are a bit of a family affair.

“We end up with a really good talent and really good families who get along,” he says. “And we’ve been able to be successful. We went 6-0 in the state tournament and 6-0 at Nationals, and we rolled lines every game. And I know that’s why we won.”

The Vipers, who have seen players progress to Division I programs, also stress the American Development Model in their practices and games.

“It’s all about player development,” says Littlewood. “We’ve tried to convince families that it’s not about Tier I or Tier II. We really build our program around skill development and helping the kids get better. And that is really why the Vipers have had a lot of success these past few years. We work on skating and small games and progression through skill development. And helping the girls get better and having a fun year.”

Any year that ends with a win and medals and a team picture certainly qualifies, though next year isn’t all that far off.

“We will all be back for Tier I next year and, hopefully, they do well there, too,” Littlewood says. “But I think it’s the focus on good families and good kids and skill development. We won Nationals and that’s awesome, but, if we didn’t, it still would’ve been a great year.”