Playmaking: 'The little things matter so much' 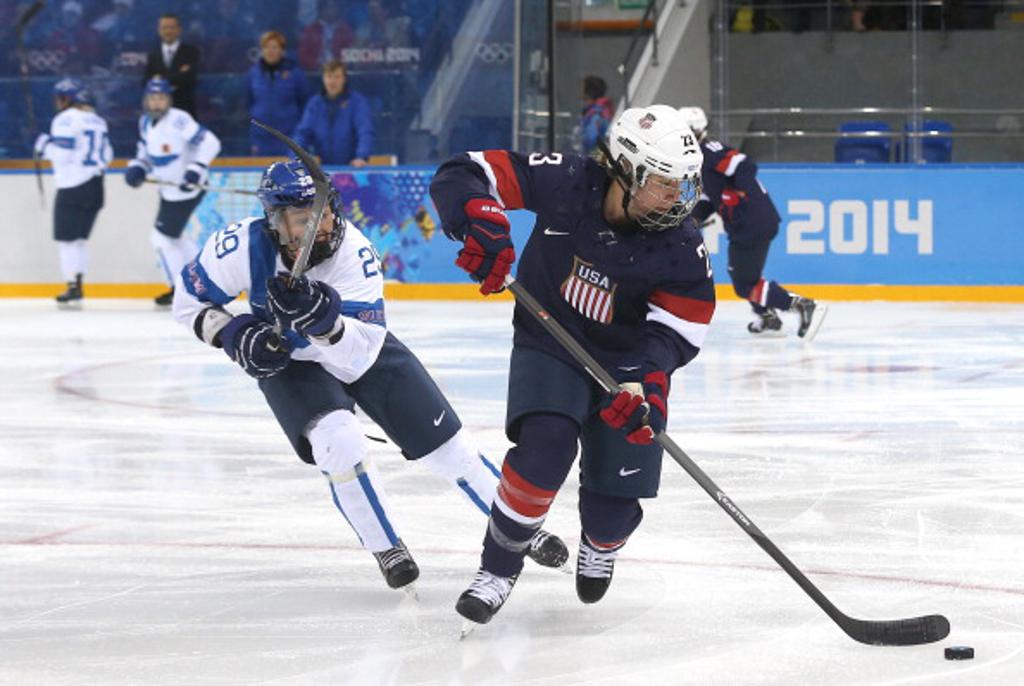 When it comes to wrapping your head around one of the most complicated and complicating aspects of hockey—making order out of hockey’s chaos to set up passes and create plays—it might help to consider playmaking as the culmination of a lot of smaller components.

“The little things matter so much,” says Team USA Olympic captain Meghan Duggan, who grew up in Danvers and is just over a year removed from winning her third Olympic medal, this one gold over rival Canada, in a shootout. “I don’t see playmaking as just making a direct-line pass. I see it as everything that leads up to that.”

Watch a goal these days, and then reverse engineer it. The intentional forecheck. The cut-off passing lane that foiled a breakout. The forced turnover. The transition opportunity. The puck chipped to the right spot. The timely change and teammate who stayed on-sides before all of it. If any of those goes in the opponent’s favor, the puck doesn’t wind up in the net.

Very few goals these days are generated by set plays that begin with wings staying on their wings. Hockey is fueled by strength and conditioning, by technology and by advances in youth hockey skill development, and is evolving faster than ever. Even from five years ago, hockey feels faster at so many levels. It’s more fluid. Players are more skilled and versatile. They’re quicker. Plays develop more quickly. Decisions have to be made more quickly, too.

“With the speed of the game changing in terms of getting from Point A to Point B,” says Duggan, ”it’s also decision-making that is faster.”

As the margins for success narrow in a rapidly evolving game, passing and playmaking opportunities, including how fleeting those opportunities are, is therefore more critical than ever.

For Duggan, who played on her first Olympic team in 2010, there’s a thrill in being part of the game’s evolution.

“I love hockey so much, and I love to see it grow every day,” she says. “Whether you’re watching women’s pro or the NHL, everything is happening at a rate that is so elite. It’s exciting to be a player. The joy of working so hard and setting somebody else up is really important, and it’s how teams are successful.”

Duggan’s 2014 Olympic teammate Shelly Picard, who grew up in Taunton and attended Noble & Greenough before playing at Harvard, is a believer in visualization when it comes to passing and playmaking. (And a believer in Duggan: “Duggan is fantastic,” Picard says. “A huge competitor, definitely one of the fiercest competitors I’ve played with and against.”)

In terms of visualizing, Picard is trying to fill her head with good thoughts.

“Before games, it’s definitely a part of my routine,” says Picard. “Seeing things happen or plays that I know I need to make for my team to be successful. It could be breakouts. It could be jumping into lanes. It could be a good gap against the other team. But I just see myself making successful plays.”

“In my career, I’ve dabbled a little bit with certain vision-training aspects and visualization, imagery, and things like that to really engage the brain,” she says. “You’re just creating new pathways in your brain to form ways to make decisions quicker. I think, as an elite athlete, being able to get your hands on anything that could make you a better player, certainly you want to try a little bit of that.”

Though Duggan is coming at it from the perspective of an elite athlete, a good part of her experience with visualizing can be relatable.

“There are parts of sports, especially at an elite level, where there a lot of distractions,” she says. "If you’re thinking about other things on the ice when you’re trying to make split-second decisions, you’re going to make decisions slower, or you might make the wrong decision. You can practice being calm so that when you do get to that point, you feel strong and comfortable like you’ve almost been there before.”

"It’s exciting to be a player. The joy of working so hard and setting somebody else up is really important, and it’s how teams are successful.” 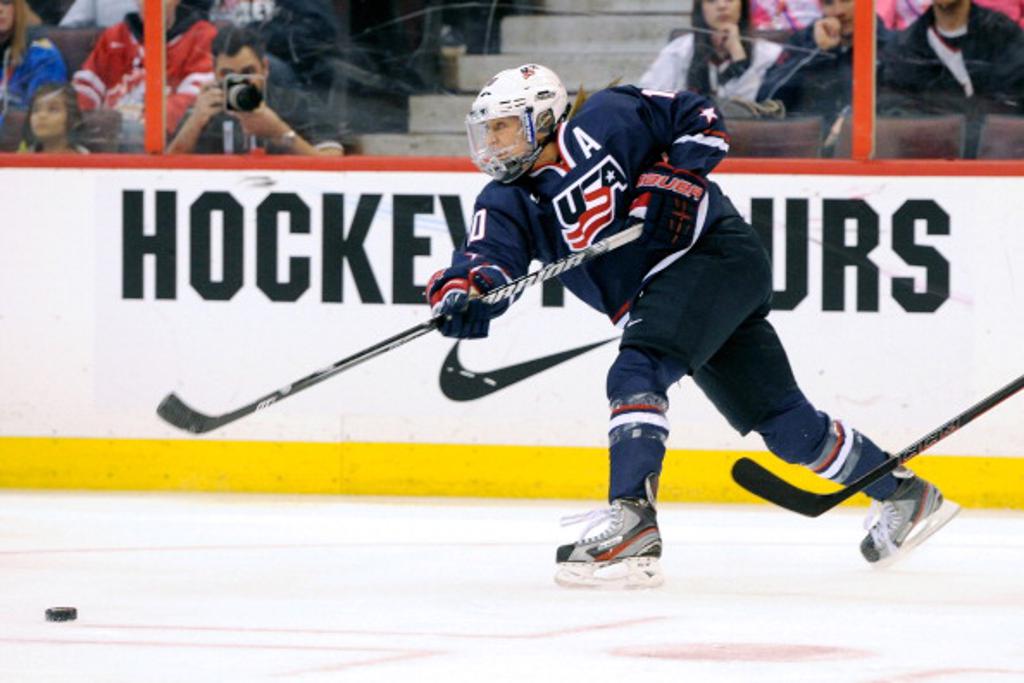 “Everyone lines up in a face-off with a position, but everybody has to know that it’s F1 or F2 or F3, [when the puck enters the zone],” says Picard. “As soon as the puck is dropped, it doesn’t necessarily matter where you lineup.”

Duggan, who has captained Team USA twice, mentions experimenting with something akin to position-independent hockey.

“Our national team has had some experiences over the last few years where we have played as a five man unit, moving all around the ice,” she says. “And we can play in any role, and you certainly have to have responsibilities, but we have played in a system that allows for more creativity. Obviously, with more creativity comes more responsibility.”

That's where playmaking without the puck comes into play. Responsible players are making plays that are leading to goals in more subtle ways.

“It’s just as important as when you do have the puck,” says Picard. “You obviously have five people out there. One person isn’t going to carry the puck the whole way. You have to be able to move together as one unit. And if you can’t keep up, get yourself into a good spot and support your teammate, you’re not going to be there very long.”

Playmakers are back-checking, getting sticks in lanes, keeping proper gaps and not cheating on defense. In transition, they're getting open to receive passes and putting themselves in position to catch any pass that might come their way. No matter how awkwardly the puck might arrive, they’re making the effort to adjust. That's making plays.

“Whether that’s a big defensive play, getting in hard on the forecheck, picking up a stick, or being able to make or take a hit,” Duggan says.

Many of the elements in making plays come down to making time. In a hockey world of condensed time and compressed space, a playmaker can blossom from creating just a little more time or space for themselves or their teammates.

“Some of the best players in the world know how to create a ton of time and space,” says Duggan. “It allows you to be more creative and make better decisions. There are a lot of things that happen in a split second. You need to know where to be and what you need to do next constantly.”

For Picard, skating is central to her ability to make plays, too.

“Skating is everything,” she says. “That way, you can buy more time and space with the puck, and you get to areas on the ice to chase down pucks and try to get to the right spot. Skating is huge and I wouldn’t be the player I am without it.”

Both players — along with legions of coaches and volunteers and parents and elite players — agree that passing remains the best way for a team to get around the ice.

While hockey is becoming faster as it evolves, the players who are most equipped to hit that moving target are the players who can make more kinds of plays than players could make only a generation before.

“Being able to look up and see the ice and make the right plays at the right time is a difficult concept, but the best teams move the puck,” says Duggan. “The puck is going to move faster and further than any player skating at any given time. And that’s the best way to win games. There’s no way around that and it’s no secret.”

To illustrate that same point, Picard had a youth hockey coach race their fastest player the length of the ice while stickhandling against multiple players who could pass the puck to each other. Not surprisingly, the passers won.

“I was never taught to try to stickhandle through someone,” Picard says. “[A good playmaker is] someone who recognizes you don’t have to go 1,000 miles an hour all the time. Be willing to put the trust in your teammates. As you continue to get to higher levels, you realize you can’t stickhandle through everyone. Get the puck, keep your feet moving and look to make the play. A simple play.”

Breaking a complicated game down to simple plays may just be the key to becoming a better passer and playmaker.